Cahir Castle in County Tipperary is one of the best-preserved medieval castles in Ireland and it was built in the thirteenth century. But visiting Cahir Castle is not on most tourists’ bucket lists. This is a shame because Cahir Castle and the Swiss Cottage and the village of Cahir are one of Ireland’s most charming areas and they are only a few miles away from the Rock of Cashel and relatively free of tourist crowds.

Tip: If you go to any OPW managed Heritage Site in Ireland on the first Wednesday of the month it’s FREE!

Tipperary is a gorgeous place to settle in Ireland if you have ever dreamed of living here Tip might be a good choice. It’s quite rural in areas but beautifully peaceful and yet there are some really good-sized cities to explore. It’s also very easy to get from Tipperary to some beautiful historic sites, for example, the Rock of Cashel, or how about exploring Limerick and the Milk Market or go walking and discover some of the legends of the fairy mounds of Ireland. Kilkenny is just a short drive away and Dublin is only two hours distance.

Planning your dream trip to Ireland? Here’s all you need to know

Getting to Cahir Castle

You can take a bus to Cahir from Dublin and the journey time is around 2.5 hours. The cost ranges from €16 and up for a return.

The train journey, unfortunately, takes around 3.5 hours and just isn’t worth the hassle. Driving from Dublin will take just over an hour. Don’t be afraid to rent a car for driving outside Dublin it’s easy to get used to the roads and roundabouts and makes it so much easier to get off the beaten path.

Cost for entry to Cahir Castle and entry hours

Please note there are no credit or debit card facilities at this site.

Take a day trip from Dublin to Cahir Castle, Blarney Castle and Gardens, and Rock of Cashel with this private tour. You and your group of six others will board a luxury, air-conditioned vehicle en route to these stunning destinations. Enjoy complimentary bottled water and use the onboard Wi-Fi to upload photos to your social media. End your trip with a free visit to Blarney Woollen Mills.

Cahir village is a unique Medieval town with the astoundingly beautiful Cahir Castle situated on a tiny island in the River Suir. It was built in the 1100s and is one of the largest and best-preserved castles in Ireland. According to the ancient Book of Lecan, a fort was destroyed on this site in the 3rd century.  There’s also evidence that Brian Boru (926 to 1014) had a house here.

There isn’t much furniture in the castle but it is a fascinating tour and you can see things like the old portcullis and its mechanism and go up to the higher floors and see out to the town and across the river.

Cahir Castle is believed to have been built in the 13th century on the site of an earlier Irish stone fort known as Cathair Dún Iascaigh (the Stone Fort of the Fortress of the Fishery).

According to the 17th-century historian Geoffrey Keating, the stone fort of Dún Iascaigh was one of the ancient royal residences of the kings of Munster before the arrival of Christianity. It is from the word ‘cathair’ that the town’s name comes from.

The Castle is quite an imposing site, set on a smallish island in the middle of the river, you can see why it was built as it appears to be quite easily defensible. The castle is in excellent condition thanks to extensive renovations that took place in the 19th century.

At the time of building, Cahir Castle was at the cutting edge of defensive castle design and much of the original structure remains. There is an excellent audiovisual show in the castle which will give you a view into the Castles’s long history.

In 1650 Oliver Cromwell and his forces demanded the surrender of the castle and it was given without a shot being fired. Imagine standing in a place where Cromwell and others stood all those years ago.

Cahir Castle sits on a rocky island called (obviously) Cahir Island in the River Suir, a location that was chosen for its natural defences when Conor O’Brien constructed the castle in 1142. The River Suir flows alongside the castle replete with lovely swans and ducks and a gorgeous riverside walk.

In the 70’s Stanley Kubrick used the castle as a setting for his film Barry Lyndon. Cahir was also featured in John Boorman’s film Excalibur and TV series The Tudors to more recent epics like David Lowery’s The Green Knight and Ridley Scott’s The Last Duel.

The village is a lovely place to stay for a day or so, explore the pubs take some walks through Glengarra Wood or book a guided tour of the incredible Mitchelstown Caves. Trek into the hills of the magnificent Galtee Mountains for sensational panoramic views, or simply walk from Cahir Castle to the gorgeous Swiss Cottage.

Cahir Castle and Cahir village were granted to James 3rd Earl of Ormond, the head of the Butler family. The castle at Cahir apart from a few short periods stayed in the Butler Family for six hundred years.

The Butler family came to Ireland in the late 12th century. Theobald Fitzwalter was the Butler family ancestor who arrived in Ireland as part of the Norman invasion. He later married Strongbow’s daughter Isabel. They built Cahir Castle in the early 13th century.

Cahir remained in the Butler family until 1650 when Oliver Cromwell arrived in Ireland. The Butlers surrendered the castle but 12 years later gained control over it again.

Cahir was bought by the State and was declared a National Monument in 1964. Beautifully restored it now contains several genuine pieces of furniture from the middle ages.

The castle’s stunning features include cannons, superb crenelations and a working portcullis.

Cahir Castle is an OPW Heritage site, as is the nearby Swiss Cottage which can be reached via the 4km ‘Coronation Walk’ or by car.

The cost for a tour of the castle or simply to go around yourself is around €5 Euros but on Wednesdays, the Trust opens the Castle for tours for free. The tours of Cahir Castle are self-guided and you can spend a good hour or two here before you head back to the Village for a pint.

This is one of the largest and most striking of the castles of Ireland, with stunning features such as a working portcullis, cannons, and beautiful crenelations.

The lower levels of Cahir Castle contain a variety of exhibits from Medieval Women to the 1916 Irish Rebellion. 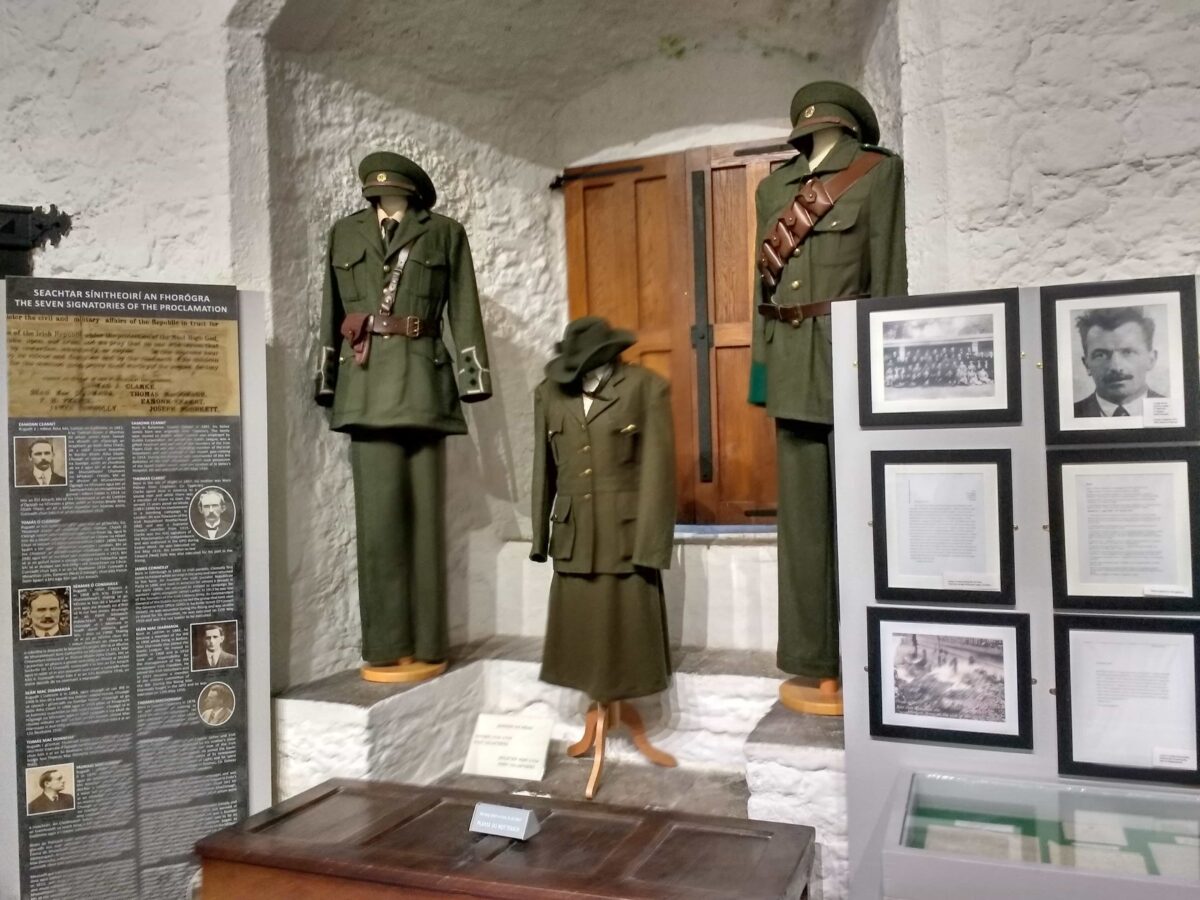 I hope you enjoyed your visit to one of the most interesting medieval cities in Ireland and its castle. If you want to learn about more castles and places to visit in Ireland? Here is some more reading for you.

33 of the most fabulous Hotel Castles to stay in Ireland