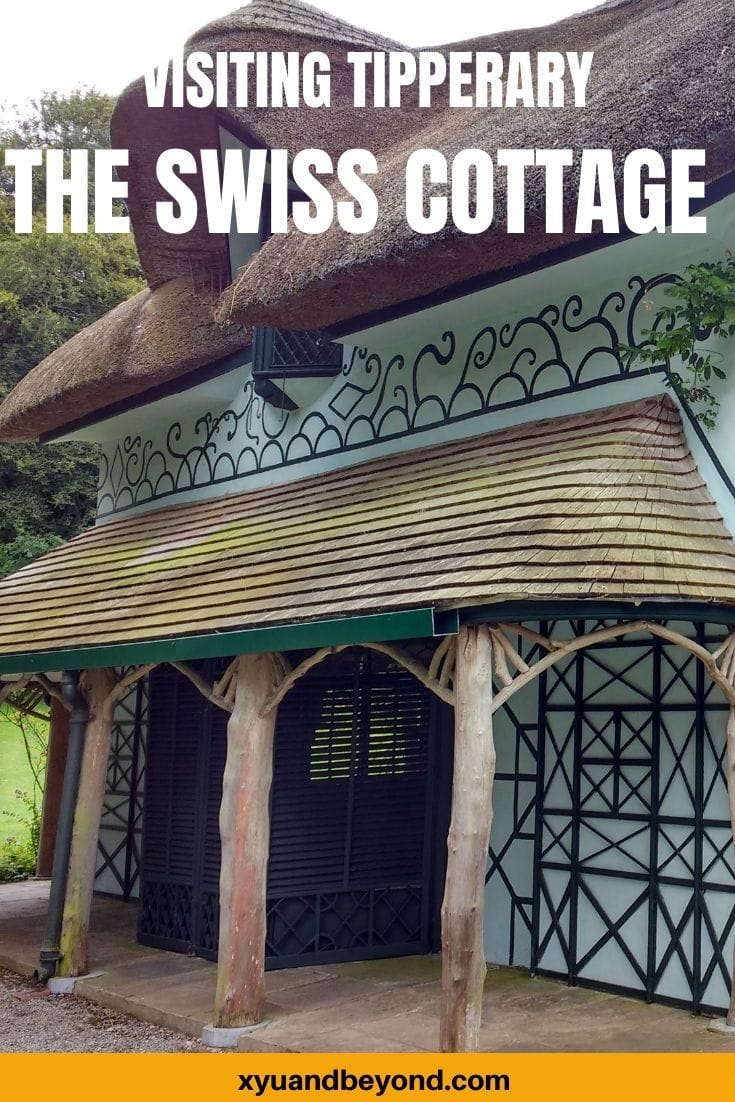 Cahir in County Tipperary is also home to the Swiss Cottage which was built in the 1800s as a country retreat as the style is known as “Cottage Orne” which really means ornamental. This is a must-visit when you are in the area as this perfectly romantic cottage makes a lovely walk from Cahir Castle.

There is a guided path from Cahir Castle to Swiss Cottage and the walk will take you probably around 30 minutes or so. If you have mobility issues you can take a cab from Cahir Village near the Castle for around €10. Swiss Cottage is a short drive from the Castle and a lovely way to spend a few hours.

The 2km walk or a short drive to Swiss Cottage is highly recommended.  Swiss Cottage is believed to have been designed by the famous architect John Nash.  The cottage is quite lovely with its thatched roof and climbing flower trellises.

The cottage was built by Richard Butler, who was the 1st Earl of Glengall, to plans from the famous Regency architect John Nash. The interior of the cottage has a graceful spiral staircase and some elegantly decorated rooms full of period furniture.

The wallpaper in the salon was one of the first commercially produced in Paris by the Dufour factory.

“Swiss cottage is a cottage orne, one of the finest examples surviving in England or Ireland, possibly designed by Nash and built about 1817–20… The cottage orne, originally an architectural toy, epitomizes the picturesque movement led by Nash who, in partnership with the landscape–designer Humphry Repton, produced a number of ornamental cottages for the grounds of country houses between 1795 and 1802. T

he 1st Earl of the Glengall died in 1819 the Swiss Cottage was probably built by his son, a fashionable young man, on succeeding to the title. It has verandas decorated with elaborate rustic stick-work, and the fantasy is extended to other small details such as the rural scenes engraved on the living-room window panes and the cobweb pattern in the hall parquet.” The Houses of Ireland (A Studio Book) Brian de Breffny, Rosemary Ffolliot, George Mott

It was left to ruin for years but was renovated and refurbished in the 1980s.  It is surprisingly small with only 2 rooms up and 2 rooms down, but the basement hides the kitchens and the servants’ rooms. The cost to view the cottage and have a tour is €4 Euros, but on some days the Trust has free entry so keep an eye out for that and you can visit the Cottage and Cahir Castle for no charge.

There is parking at Swiss Cottage and you follow the footpath through the forest and across the River Suir. There is a tunnel built through the hill which leads to the entry to Swiss Cottage which is through the servant’s entrance to the basement of the house.

From there the guided tour takes you through the house which as I mentioned is only 2 rooms on the main floor and 2 rooms upstairs.

Swiss Cottage was built as a kind of ‘country retreat’ the owners would have picnics and garden parties here on the expansive lawns and pretend it was a rural idyll. There are no formal gardens at Swiss Cottage but there is a Yew tree that legend says is over 1000 years old. Locals say it was planted by monks 1,000 years ago when this was the site of an early Celtic/Christian monastery.

Have you heard or been to see the Swiss Cottage yet?