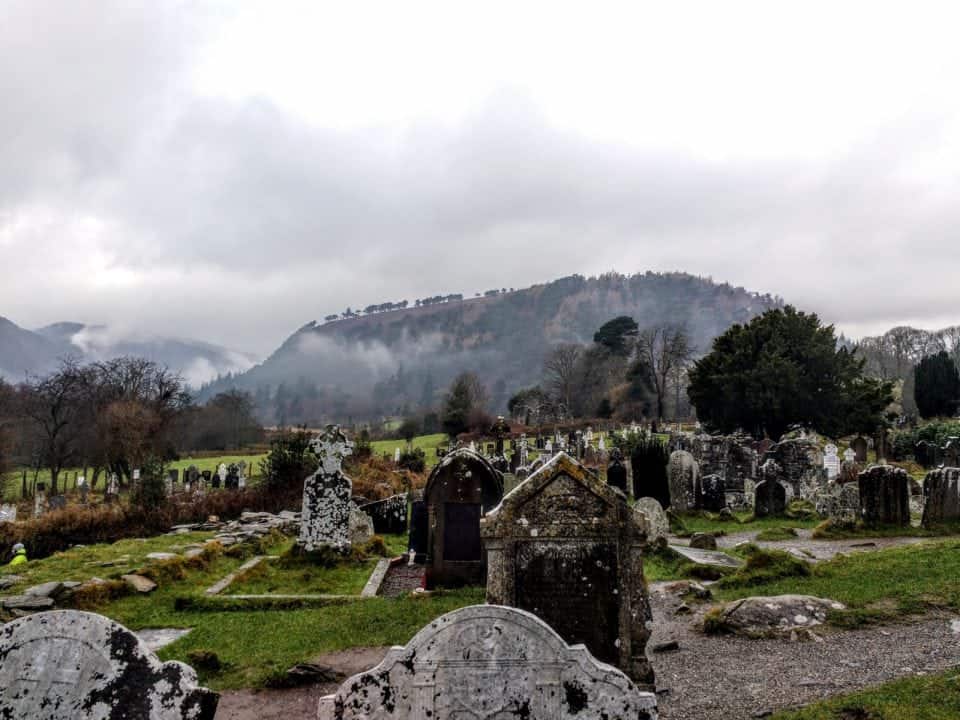 How to visit Glendalough Ireland

The early Christian monastic settlement founded in the 6th century by St. Kevin, and known as Glendalough is located just south of Dublin in the superb Wicklow National Park. It is easy to get to by car and there are many tours that will take you to the area as well. There is no bus service into the park apart from the tourist tours.

To get to Glendalough from Dublin without a vehicle can be a bit tricky. The drive itself is very straight forward simply Google map the trip from where ever you are in Dublin.

You will also find many day trips and day tours from Dublin to the area.

Dublin to Glendalough by bus

There is a private bus tour company that does trips to the Glendalough Visitors Centre with the Glendalough bus company which picks up at various stops in Dublin and costs around € 20.00 for a return fare and € 13.00 for a one way.

There are also a variety of tours available from Dublin to Glendalough that include the Wicklow Mountains and Glendalough National Park.

The Upper Lake area has an overflow parking lot with washrooms, and stalls for picnics, coffee and ice cream. On a busy day, it can take over an hour to get into one of the parking lots and the place is jam-packed with both Irish and tourists. There is no fee to enter the Park but the parking costs €4 per car.

From the parking lots, the Walks are clearly outlined with signs all along the paths. 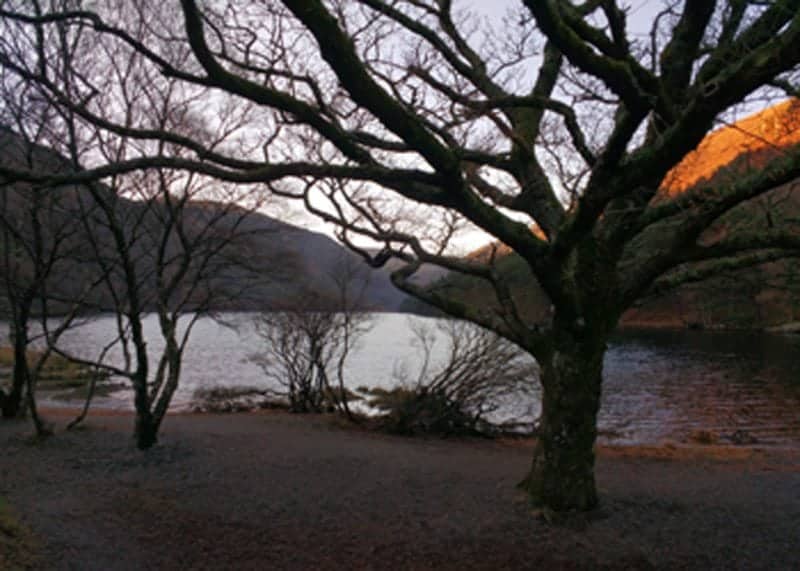 Glendalough’s Monastic site is located near Lower Lake – there is a very small parking area across from the main entryway.  The medieval stone arches that you enter through are Ireland’s only surviving example of such a gateway. The arch was built with Roman-style columns and the stones were cut specifically to fit requiring no mortar to bind them together. 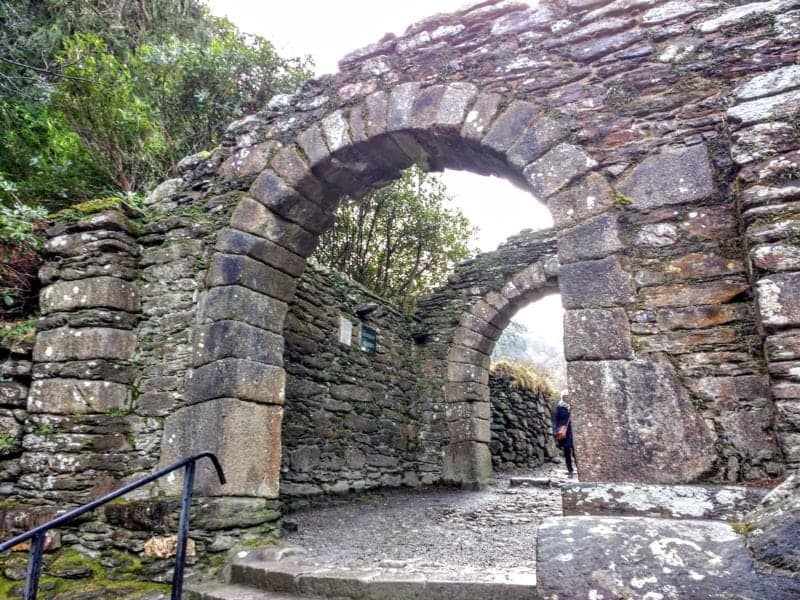 This early Christian monastic settlement was founded by St. Kevin in the 6th century and from this developed the ‘Monastic City’.  Despite attacks by Vikings over the years, Glendalough thrived as one of Ireland’s great ecclesiastical foundations and schools of learning until the Normans destroyed the monastery in 1214 A.D. St.

Glendalough is located in a glacial valley consisting of two lakes (the Upper and Lower Lakes) which is where the name derives from –  Gleann dá Locha ‘the valley of the two lakes’. Evidence for human activity in the valley goes as far back as the Neolithic Period. Recent digs have uncovered industrial activity that may date back to the founding of St Kevin’s monastery around 600AD, due to the history of the area Glendalough is not only one of Ireland’s most visited attractions but also historically one of its most important religious sites.

The Glendalough monastic settlement is the earliest in Irish history, founded by Kevin (Irish: Coemhghein), a descendant of one of the ruling families of Leinster.  As a child, he studied under three holy men (Eoghan, Lochan and Eanna) and as a young man, he went to live at Glendalough “in the hollow of a tree.”

Kevin lived the life of a hermit in a cave, his friends were the animals and the birds and he preferred a solitary life away from his followers. He was a hermit for 7 years, went barefoot and ate very little. By 540, his fame had spread far and wide and his followers came to Glendalough and developed a seminary and monastery in his name. Eventually, Glendalough, with its seven churches, became one of the chief pilgrimage destinations in Ireland. 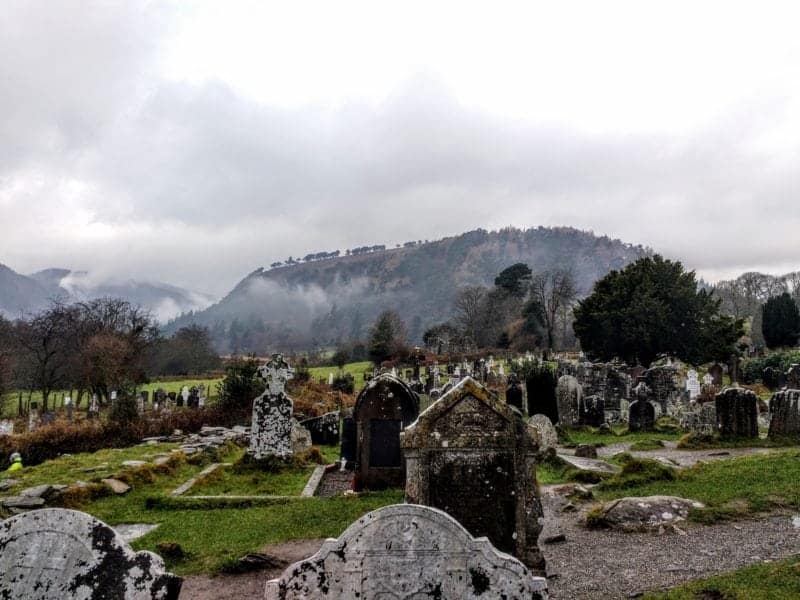 The ‘city’ consists of a number of ruins and remains the tallest and most impressive being the round tower which stands over 30 meters high.  In Ireland, round towers served many purposes from refuge in times of attack to bell towers and storehouses. The door of a round tower is usually around 3-4 metres above ground and accessed by a ladder than can be pulled up in case of attack.  Originally the tower had six wooden floors all connected by ladders. The four stories above the entryway are lit by a small window and the top story has four windows facing the cardinal points of the compass.

What to See at Glendalough’s Monastic Sites

The largest building at Glendalough is the cathedral, with the earliest part being the nave, which is believed to have been built in the 10th century. The chancel, sacristy, and north door were added in the late 12th and early 13th centuries. 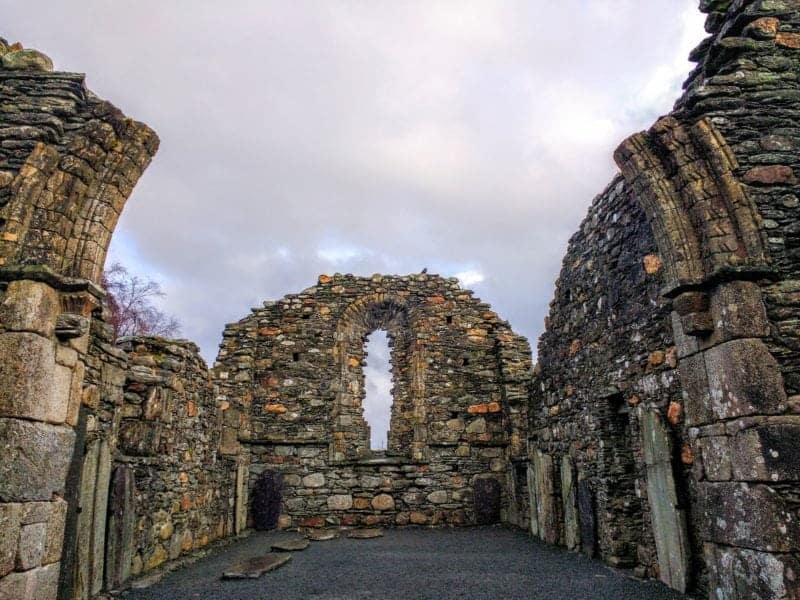 A few meters south of the cathedral is an ancient cross of local granite with an un-pierced ring, which is known as St. Kevin’s Cross. 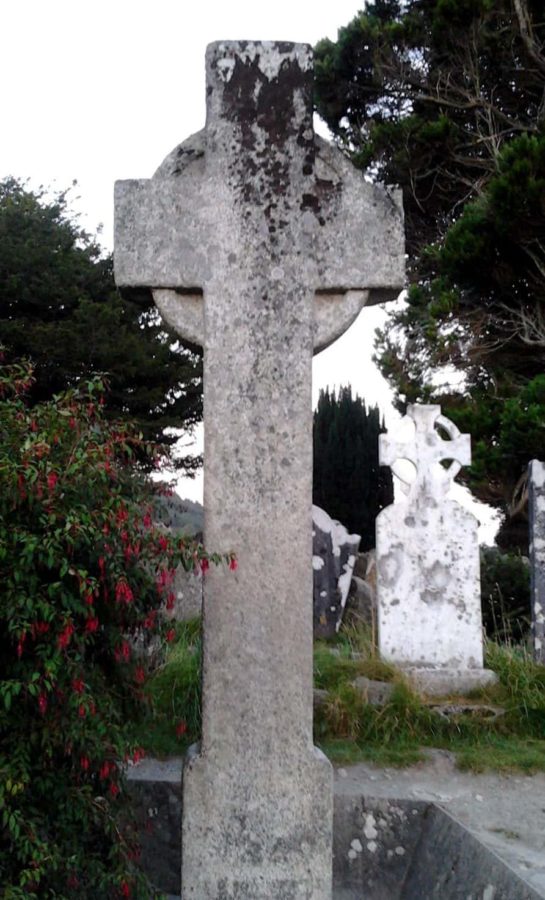 Nearby is the Priests’ House, which has been almost entirely reconstructed from the original stones based on a 1779 sketch of the original.  The original use of the building remains unknown but it may have been a resting place for the relics of St. Kevin… Its name comes from the practice of burying priests there in the 18th and 19th centuries.

St. Kevin’s Church is a stone-roofed building with a round belfry with a conical cap at the west end. The church originally consisted of a simple nave with an entrance at the west end and a small round-headed window in the east gable. The incredible roof is formed of overlapping stones, supported by a semi-circular vault. The church had a wooden upper floor and the priests could get to the roof chamber through a rectangular opening on the western side of the vault. 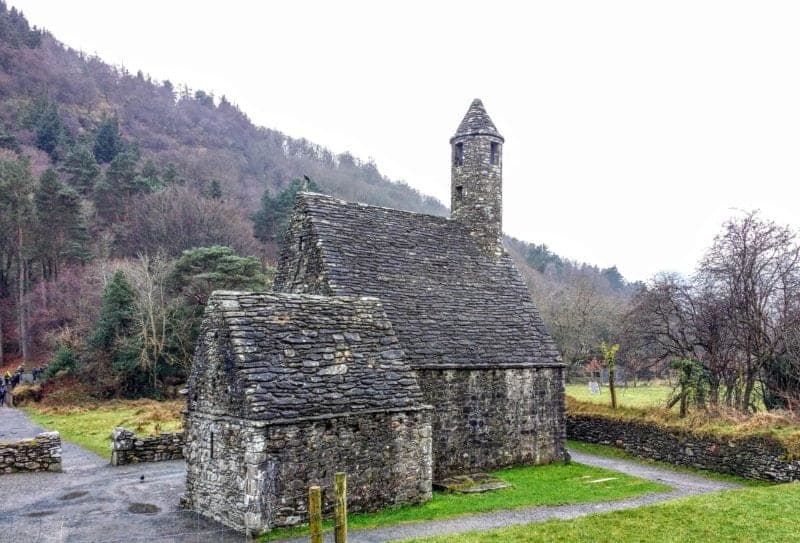 Across the path are the foundations of St. Kieran’s Church, which was excavated in 1875.  It is believed that the Church was built to commemorate St. Kieran, the founder of Clonmacnoise. 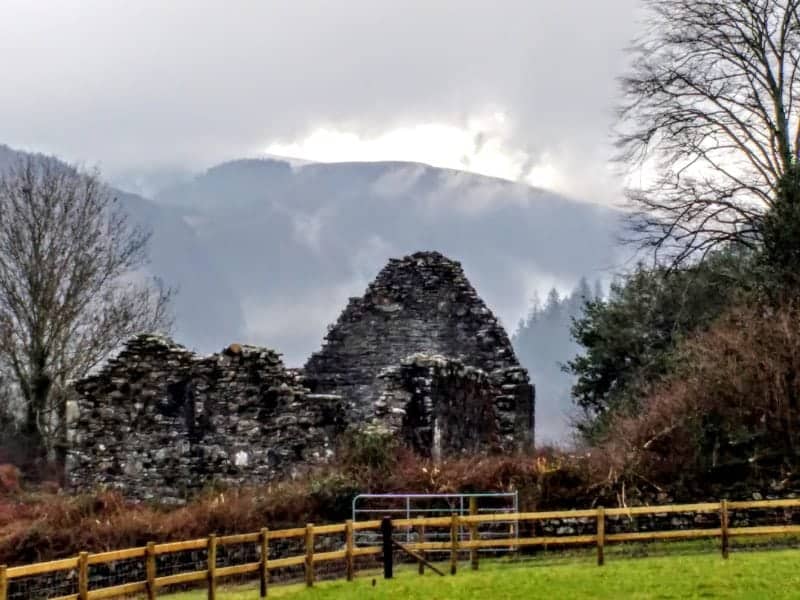 West of these buildings and accessible only from the main road is St. Mary’s Church which is also known as Our Ladies Church one of the earliest of Glendalough’s churches.

On the trail to Upper Lake, you will see the Caher, a stone-walled circular enclosure that sits between the two lakes.  It is believed that it was used by pilgrims as a resting place on the pilgrimage, nearby are several crosses, which were used as stations on the pilgrims’ route. 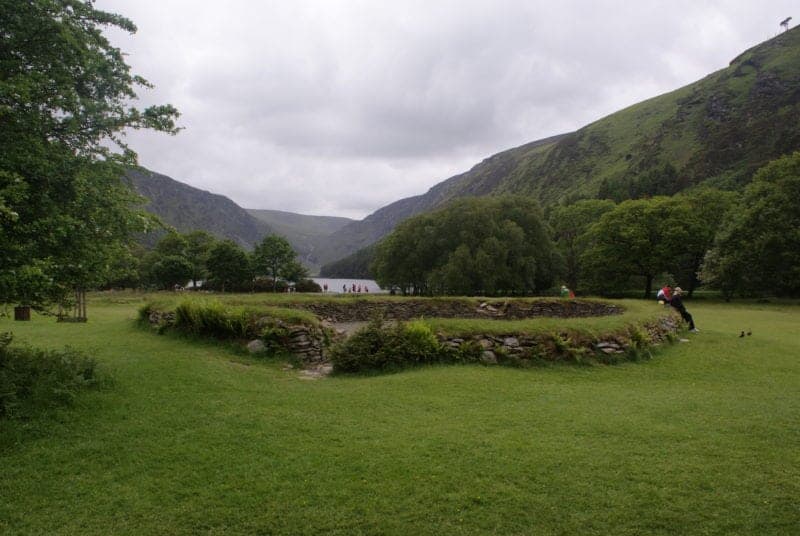 Across the stream to the southwest is the Reefert Church, whose name derives from Righ Fearta, “burial place of the kings.” East of the church are two ancient crosses, one with an elaborate interlace pattern.  Nearby, on the other side of the river, are the remains of another small church.

The Visitor Centre is located just before you arrive at the Glendalough monastic site. There is an interesting audio-visual show and a small exhibition. There are also guided tours available in both French and Spanish from the Centre.

Glendalough’s walking routes and trails are all very well marked and are accessible for a variety of abilities, although the monastic site is not accessible by wheelchairs. 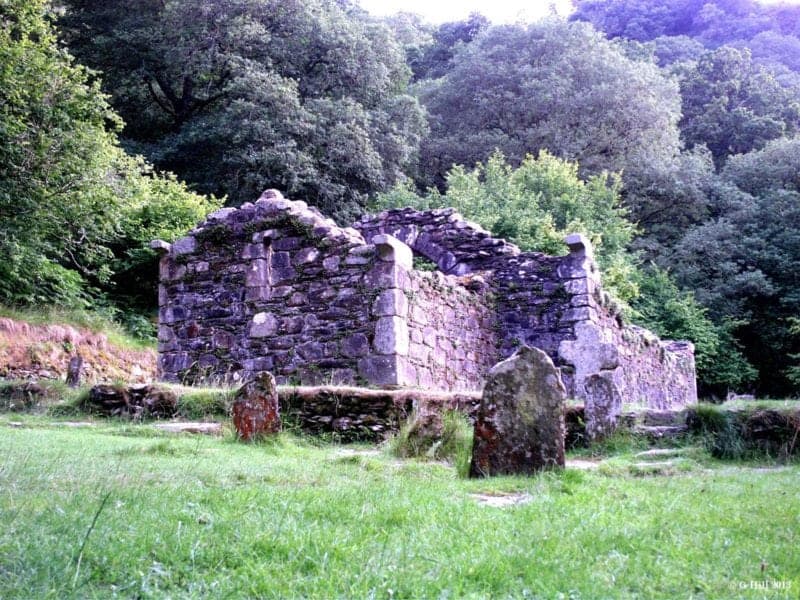 Accessed by a steep hike to a rocky spur over the Upper Lake is St. Kevin’s Cell. Only the foundations survive, but it is thought to have been a “beehive” hut, like those on Skellig Michael and the Dingle Peninsula.

Glendalough has 9 marked walks from easy to difficult for walkers. The Visitor Centre in Glendalough sells a Trail Guide for only €0.50. The maps list the nine routes with the shortest distance being a few kilometres and the longest 11 kilometres.

Glendalough’s monastic sites are just a short drive from Dublin and there are several bus tours and private tours to the area that you can take if you don’t have a vehicle.

Where to stay at Glendalough

In the heart of the Wicklow Mountains National Park, the Glendalough Hotel has views of the ruined Glendalough Cathedral. The hotel offers en suite rooms, a restaurant and pub.

As the Glendalough is located in a valley, most of the rooms have charming countryside and mountain views. All rooms have a work desk, hairdryer and iron.

The Glendassan River Restaurant serves local and international cuisine created using fresh, local ingredients. The Glendalough Tavern aims to create a friendly, Irish pub atmosphere and serves bar food. There is also a lounge with an open fire in winter.

Need a whole house then you can rent the Orchid House. Orchid house has a terrace and garden views. Set 16 km from Wicklow Gaol, the property offers a garden and free private parking.

This holiday home has 2 bedrooms, a kitchen with a dishwasher and a microwave, a flat-screen TV, a seating area and 2 bathrooms fitted with a shower.

A children’s playground is available on site and hiking can be enjoyed within close proximity of the holiday home.

The Bridge Tavern offers accommodation with free WiFi and flat-screen TV, as well as a bar. There is a fully equipped private bathroom with a shower and a hairdryer. Guests at the bed and breakfast can enjoy an à la carte or a Full English/Irish breakfast.

If you are looking to get out of Dublin for a day here are a selection of easy day trips you can take:

Pin it for later:

Such a breathtaking place! I love everything about it!