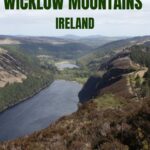 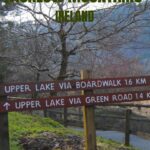 The Wicklow Mountains National Park can be found just south of Dublin. Located in County Wicklow (obviously) the National Park makes an incredible day trip from Dublin and is one of the most scenic national parks in Ireland’s Ancient East.

The Wicklow Mountains National Park covers over 20,000 hectares of stunning scenery and mountain hikes. The park includes the incredible historic valley of Glendalough and its historic legacy.

The park can get incredibly busy on weekends when many locals head to the area for hiking and walking. When we went to the Park it took nearly 2 hours to reach the parking lot. There is an overflow parking lot in Laragh which has a shuttle bus to the Visitor Centre.

What are the Wicklow mountains?

These mountains have been inhabited since the Neolithic era and they contain a series of monuments from passage tombs to the Monastery at Glendalough.

During the 12the century Norman invasion, the Wicklow Mountains provided hiding places and shelter for the Irish clans fighting against the English.

How far are the Wicklow Mountains from Dublin?

The Wicklow Mountains are an easy drive from Dublin if you have rented a car and it takes about an hour to get there.

How to get to the Wicklow Mountains from Dublin

If you don’t fancy renting a car when in Ireland you can get to the Wicklow Mountains in several other ways although the options are limited because there really is no public transport to Wicklow.

The St. Kevins Bus Service is a privately owned, family-run business, that operates daily services to Glendalough and Wicklow national park from Dublin during the season.

There are lots of private tour companies that take trips to Glendalough and the National Park area but some of the roads are pretty narrow and it may be best if you want to see more to do a hike once you get there.

What to see in the Wicklow Mountains?

County Wicklow is known as the ‘Garden of Ireland’ because of its stunning landscapes and the diversity within its woodlands, mountains and lakes – or lochs as they are known here.

If you are a fan of the scenery in P.S. I Love You this is the bridge used in the film. Situated over the Liffey (which does flow through Dublin) you can admire the same scenery you saw in the film.  The actual address is 28 Sandford Road, Wicklow, Dublin 6, Ireland.

Guinness is actually brewed from the water in the Wicklow Mountains and piped into Dublin because it is so pure and clear and not the Liffey as rumour has it.

Another filming location you may not want to miss is Lough Tay, also known as Guinness Lake. This is the lake that was used as Kattegut in The Vikings HBO series. Lough Tay is one of the most photographed areas of Wicklow and from the viewpoint, you can spot the Guinness Estate which is currently up for sale.

Driving up the Sally Gap on the R759 you will see on Google maps the Ballinastoe Car Park to the side of the road. Park your car here and then cross the road for some stupendous views of the Wicklow Mountains and Loch Tay.

The Glendalough Monastic Site is considered to be one of the most beautiful places in Ireland according to Lonely Planet.

Glendalough’s Monastic site is located near Lower Lake – there is a very small parking area across from the main entryway.  The medieval stone arches that you enter through are Ireland’s only surviving example of such a gateway.

This early Christian monastic settlement was founded by St. Kevin in the 6th century and from this developed the ‘Monastic City’.  Despite attacks by Vikings over the years, Glendalough thrived as one of Ireland’s great ecclesiastical foundations and schools of learning until the Normans destroyed the monastery in 1214 A.D. St.

The ‘city’ consists of a number of ruins and remains the tallest and most impressive being the round tower which stands over 30 meters high. The City contains several churches, a graveyard and some ancient Celtic Crosses.

There is no charge to visit the site but if you want to see the Visitors Centre exhibition the cost is around €5,00 per adult.

Glendalough walks and lakes are jaw-droppingly beautiful. An area of outstanding natural beauty is it also home to one of the most important historic sites in Ireland.

Glendalough has 9 marked walks from easy to difficult for walkers. The Visitor Centre in Glendalough sells a Trail Guide for only €0.50. The maps list the nine routes with the shortest distance being a few kilometres and the longest 11 kilometres.

The Upper Lake area has an overflow parking lot with washrooms, and stalls for picnics, coffee and ice cream. On a busy day, it can take over an hour to get into one of the parking lots and the place is jam-packed with both Irish and tourists. There is no fee to enter the Park, from the parking lots, the Walks are clearly outlined with signs all along the paths.

The Sally Gap got its name after the Irish Rebellion of 1798. The Gap was built by the British Army who wanted to flush out the rebels and to this day the road is called the Military Road.

Make sure to stop at the Glencree Visitor Centre if you have time. It was built to house the British soldiers guarding the pass and is now a Centre for Peace and Reconciliation.

The Wicklow Gap connects Glendalough with the Sally Gap and is the only other road passing through the Wicklow Mountains. They say on a clear day you can see the Snowdonia Mountains in Wales across the Irish sea from here.

Driving the Wicklow Gap near Glencree there is a small parking lot where you can stop and view the two lakes from above. From here you will spot the peat cutting strips on the side of the hills. This is also an area that was used for the movie Braveheart filing some of the fight scenes.

Set in the Wicklow Mountains, the Blessington Lakes cover 5000 acres of water. The Lakes were formed 50 years ago by the building of the Poulaphouca Dam and hydroelectric station.

The road around the lake offers amazing views over the reservoir and the Wicklow Mountains.  Drive or cycle around the lake going through historic villages such as Valleymount, Ballyknockan or Lacken.

If you don’t spend the day at Glendalough may I suggest you take the time for a trip to the Powerscourt Estate and Gardens.

On your way back to Dublin you will find Powerscourt about a half an hour drive just outside of Bray.

Set within some of the most stunning views in the east of Ireland. Powerscourt was originally a 13th-century castle whose original owner was a de la Poer (anglicized as Power).

The Gardens at Powerscourt are the great attraction of the place. With stunning views of Sugarloaf Mountain, they stretch over 47 acres and offer a breathtaking blend of formal gardens, statuary, fountains, lakes, Japanese gardens, a Pet Cemetery, the Pepperpot Tower, sweeping terraces, secret hollows and rambling walks.

Don’t forget to go and visit Powerscourt Waterfall it is Ireland’s highest at 121m (398ft.) and is 6km from the Main Estate. It is set in one of Ireland’s most beautiful parklands at the foothills of the Wicklow Mountains.

The house itself is home to the Avoca Shop and the Avoca Terrace Cafe, which serves up a fabulous lunch or just a simple scone with a cream tea. The Avoca shops are known for their gorgeous handwoven blankets and beautiful weavings.

Here are the best attractions in the Wicklow Mountain map:

Where to stay in the Wicklow Mountains

In the heart of the Wicklow Mountains National Park, the Glendalough Hotel has views of the ruined Glendalough Cathedral. The hotel offers en suite rooms, a restaurant and a pub. As the Glendalough is located in a valley, most of the rooms have charming countryside and mountain views.

The Glendassan River Restaurant serves local and international cuisine created using fresh, local ingredients. The Glendalough Tavern aims to create a friendly, Irish pub atmosphere and serves bar food. There is also a lounge with an open fire in winter.

Need a whole house then you can rent the Orchid House. Orchid house has a terrace and garden views. Set 16 km from Wicklow Gaol, the property offers a garden and free private parking.

This holiday home has 2 bedrooms, a kitchen with a dishwasher and a microwave, a flat-screen TV, a seating area and 2 bathrooms fitted with a shower.

A children’s playground is available on site and hiking can be enjoyed within close proximity of the holiday home.

The Bridge Tavern offers accommodation with free WiFi and flat-screen TV, as well as a bar. There is a fully equipped private bathroom with a shower and a hairdryer. Guests at the bed and breakfast can enjoy an à la carte or a Full English/Irish breakfast.

Have you been to the Wicklow Mountains yet? It is one of the most popular Irish tourist destinations and usually the first on everyone’s dream trip to Ireland.

PIN it to save it