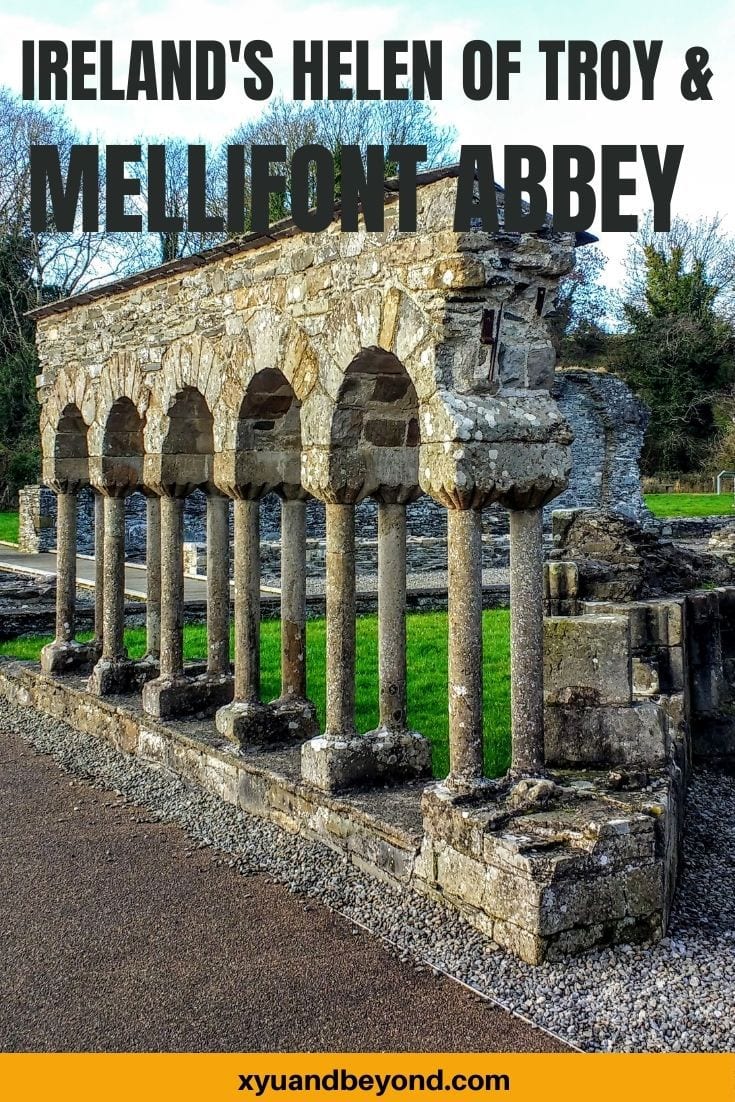 Mellifont Abbey and the legend of Ireland’s Helen of Troy

There is a large parking lot and from here you can just make out the tops of some ruins that appear to be below ground level. The Visitors Centre is to the left of the parking lot and is accessible although the site is not. It is a beautiful location though and you can hear the river whispering in the background and if you listen carefully you can just imagine the chanting of monks as they went about their daily routines

How to get to Mellifont Abbey

In 1142, the first Cistercians came to Ireland at the invitation of St Malachy, archbishop of Armagh.  He had visited the famous monastery of Clairvaux on a journey to Rome and, impressed by what he found there, asked St Bernard, the abbot, to train some of his companions in the monastic way of life.  These monks, together with some ten other French monks, became the founders of old Mellifont Abbey, about two miles from Monasterboice.  The site was donated by O’Carroll, chieftain of Oriel.

The monastery flourished and founded several other Cistercian houses in Ireland.  Monastic life continued there until King Henry VIII’s suppression of the monasteries in 1539. Today the ruins of Old Mellifont are in the care of Heritage Ireland.

The farmland and fields around the Abbey would have been a wonderfully fertile land for growing enough food to feed over 400 of the monks and lay brothers. The Abbey has a dominantly peaceful history but William of Orange did use the Abbey during the Battle of the Boyne as his headquarters.

The Cistercian order was called the White Monks, which was due to the white choir robe worn over their day to day habits. The rule of St. Benedict, which was all about prayer, work, peace and a return to manual labour was literally observed by the Cistercians.

Mellifont was a well-known monastery in its day and in 1152 it hosted the Synod of Drogheda which was attended by Kings and Bishops.  Mellifont was demolished during the Reformation when King Henry VII dissolved them and took any treasures belonging to the monasteries. Mellifont was sold and a fortified manor house was built on the site in 1556 by Edward Moore.

What to see at Mellifont Abbey

In the visitors centre, you can read all about the history of the Cistercians and of Mellifont. In the background, you will hear the haunting sounds of the monks chanting and learn about the mason’s marks on the carved stones. There’s a 3-D model to get a feel for the site and you can book your guided tours here as well.

The octagonal lavabo is an absolute masterpiece of Romanesque architecture and is the only known lavabo in Ireland. It was a medieval washroom that originally held a fountain used for cleansing both spiritually and physically. It is from this fountain that Mellifont gets its name which means ‘honey fountain’.

The Chapter House structure still has some of the handmade 13th Century tiles in place and this is where all the monks would gather daily to listen to the reading of the rules governing the Chapter. This is also where important meetings took place, monks took their holy vows and important guests were received.

Visit the buildings in the southern part of the site, where the refectory and infirmary once stood, and have a peek into the calefactory. This was one of the few places in the monastery where a fire would have been lit. In this room, elderly and sick members of the community could keep themselves warm.

A calefactory was a room in a traditional Catholic abbey. While the rest of the abbey was unheated, the calefactory had a fireplace, and so it was the one room where the monks could gather to warm themselves in colder climates.

The legend of Devorgilla – Ireland’s Helen of Troy

Devorgilla (often described as ‘Ireland’s Helen of Troy’), was the daughter of Murchad Maelseaclainn the king of Meath which was the fifth and richest province of Ireland. Meath was the key to the high kingship, with its ancient connection to Tara and the political power afforded by the division of its rich land, which was bartered to shore up ever-shifting alliances.

In an effort to protect his kingdom Murchad Maelseaclainn gave his daughter Dervorgilla in marriage according to Brehon Law to Tiernan O’Rourke in 1128. The legends tell of a story of Dervorgilla leaving her husband O’Rourke and running away with her lover Diarmait McMurrough.

However in reality Dervorgilla’s brother Maelseaclainn Maelseaclainn planned to invade the O’Rourke territory and he requested McMurrough to remove his sister and her property out of the path of the invading armies, to ensure her safety. McMurrough complied and took her to the protection of his capital at Ferns.

Dervorgilla was taken into McMurrough’s protection with the knowledge and encouragement of her family. There was no elopement with a lover. If there had been Dervorgilla would never have been treated as the great lady she was. Runaway brides forfeit all rights in society and yet Dervorgilla attended the consecration of Mellifont in the company of what would be considered Ireland’s royalty.

As usual in history, women are used as pawns in the games of power between men. Legends may tell of Dervorgilla being a faithless wife but it is far more accurate to see her as an important part of history in the struggles between two men for control over County Meath.

The story of Dervorgilla, a twelfth-century queen became a point in Irish history that was used by poets, writers historians and politicians to point out this is the moment in time that Ireland’s downfall began. As a result of Dervorgilla’s being kept by McMurrough, her brother raised an army. They invaded Leinster and recovered Dervorgilla.

McMurrough was banished. He fled to Bristol and returned with the Normans in 1167 to recover his kingdom. On October 18, 1171, Henry II landed in Ireland and the Norman (read English) invasion began. This invasion and colonization of Ireland are blamed on Dervorgilla.

When Dervorgilla died at Mellifont on 25 January 1193, she was 85 years old and had outlived by many years all the participants in the drama of 1152.

In 1938, at the invitation of Cardinal McRory, the monks of Mount Melleray Abbey in Co. Waterford founded a new monastery at “Oriel Temple”, Collon, on lands that had been part of the property of Mellifont Abbey four hundred years before. The present community continues to live Cistercian life in the archdiocese of Armagh.

Mellifont Abbey is just one of many hundreds of Abbeys in Ireland that were destroyed thanks to Henry VIII and his reformation. There is usually a sense of peace at these ruins as they are dominantly located in lush agricultural areas by flowing rivers. You can certainly see why the monks wanted to live in these areas.

101 Places to visit in the Republic of Ireland

What Abbeys have you been to visit in Ireland?