Monasterboice and Kells are situated close to Dublin and are very easy to find and get to if you have rented a car and are driving.  Monasterboice is home to one of the finest celtic crosses in the country. Kells is, of course, the original home of the Book of Kells which is now in Trinity College’s library in Dublin. Both locations are relatively close to each other and make a great day trip from Dublin. 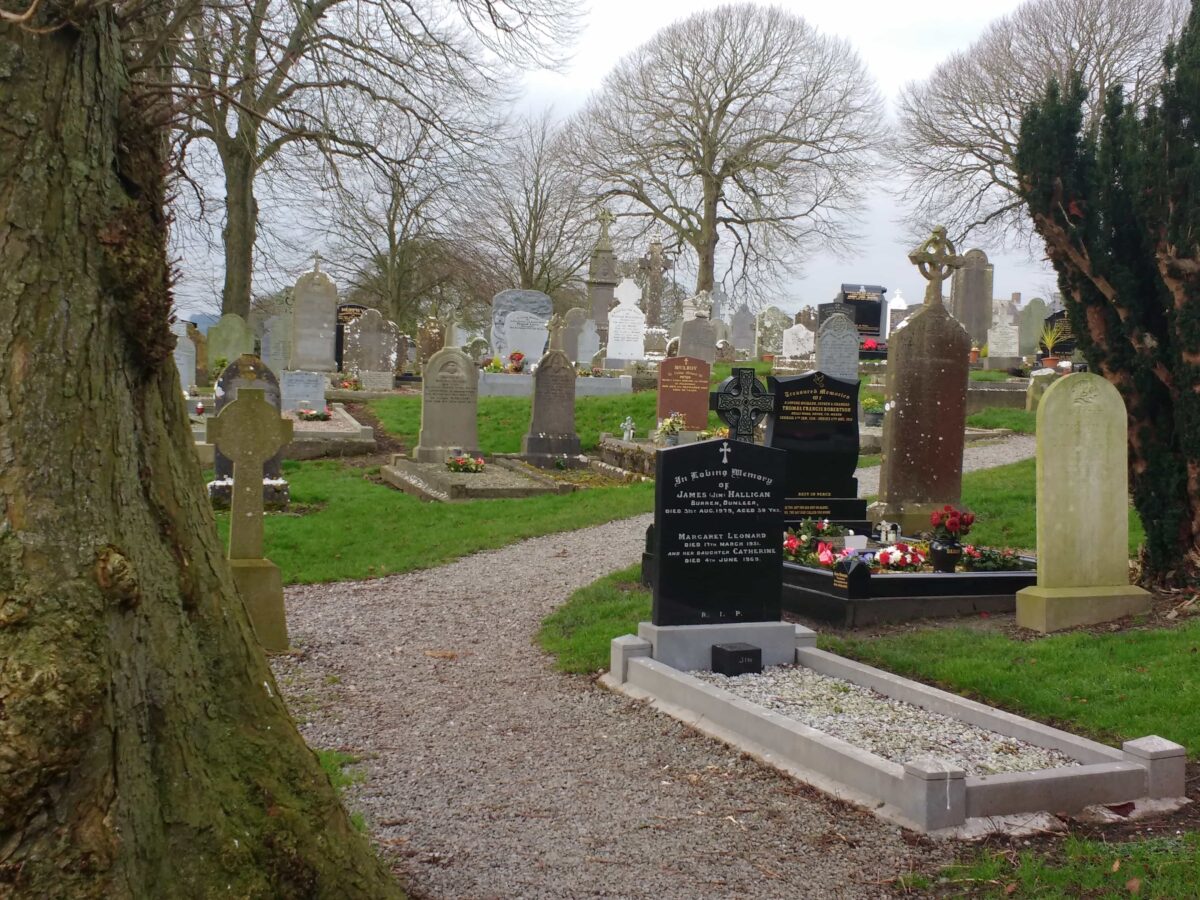 This is not an easy task by public transit and could take you up to 4 hours or so. You would have to get a bus from Dublin to Drogheda then from Drogheda get to the Monasterboice Inn where you could walk to the site in about 30 minutes or so.  The Inn is a lovely place to stop for a drink or a meal, serving folks on this road for 200 years the old coaching house retains all its personality within perfectly modern walls.

You absolutely must rent a car when in Ireland – but it can be fraught with insurance horrors, and driving nightmares but don’t panic it really isn’t that bad it’s all written out here for you.

The site itself is still used as a graveyard to this day and its location sits down a country road and the site ists just behind a lovely cottage style property. With sweeping views of the countryside, Monasterboice is a quiet peaceful retreat that hides some incredible Irish history.

I do think it is rather a shame that Tourism Ireland has not made the most of this amazing site. With the most impressive high crosses in Ireland, a 1000 foot round tower and some of the best medieval ruins in the country the site is surprisingly neglected with bad signage and very little to encourage the tourist or traveller. This is what the sign at the gate reads:

AD 521. No building of so early a date survives here.

The oldest monuments [are] all dating from the 10th century.

Beyond (sic) a list of abbots little is known of the story of the monastery.

With a little creativity and some better signage that would indicate the richness of the site and the true importance of this area as an Irish monument, Tourism Ireland could actually let the people know that they are proud of their heritage and not dismissive.

When I was researching Monasterboice prior to my trip there I found this written by Alfred P Smyth a former pro-vice chancellor of Canterbury Christ Church University, former warden of St George’s House, Windsor Castle, and emeritus professor of medieval history at the University of Kent.

“Welcome to Monasterboice. You are about to visit one of Ireland’s truly ancient and historic monastic centres where the precious lamp of learning was kept alive throughout the Dark Ages when the rest of Europe was devastated by Barbarian Invasions.

This monastery was founded by the Irishman Buite, as long ago as 521 AD at a time when there was still a flourishing Roman Empire in the eastern Mediterranean and a hundred years before most of England had become Christian. Here there was a home to a thriving and wealthy community of monks and scholars, artists, poets and craftsmen, for more than six centuries – chief among whom was Flann of Monasterboice (Flann Mainistrech) who died in 1057. Flann was described in his lifetime as Chief Learned Man and Professor of History in Ireland. Many of Flann’s original poems and historical writings still survive and are found in medieval manuscripts housed in great libraries in Dublin, Oxford, London and elsewhere.”

Wow doesn’t that just get the imagination jumping????

So we wandered down literally the garden path to the site behind this little Irish cottage of a country lane to the ruins of the churches and the graveyard, Monasterboice is still used to this day as a graveyard and it is a beautifully haunting place. Set in the country just outside Dublin it is immensely peaceful and a beautiful place for a walk. The day we visited we saw a troupe of students from a local school taking pencil rubbings of the monuments and crosses.

Monasterboice is near Drogheda, and it was founded in the 5th century by St. Bhuithe, one of St. Patrick’s original followers. Today the ruins are known for one of Ireland’s best collections of high crosses, in particular, The South Cross or Cross of Muiredach, the Tall Cross or the West Cross.

Professor Smyth’s description of the Cross of Muiredach is as follows:

“As you pass by the High Cross of Muiredach, you are gazing at one of the most significant stone carving from Early Medieval Europe with imagery inspired by ancient Egyptian Christianity. One of its panels shows Viking warriors dressed in lederhosen arresting Christ and brandishing distinctive Norwegian swords. It was to provide a refuge from these same Viking barbarians that the great Round Tower was built during the height of the Viking Wars in the 10th century.” 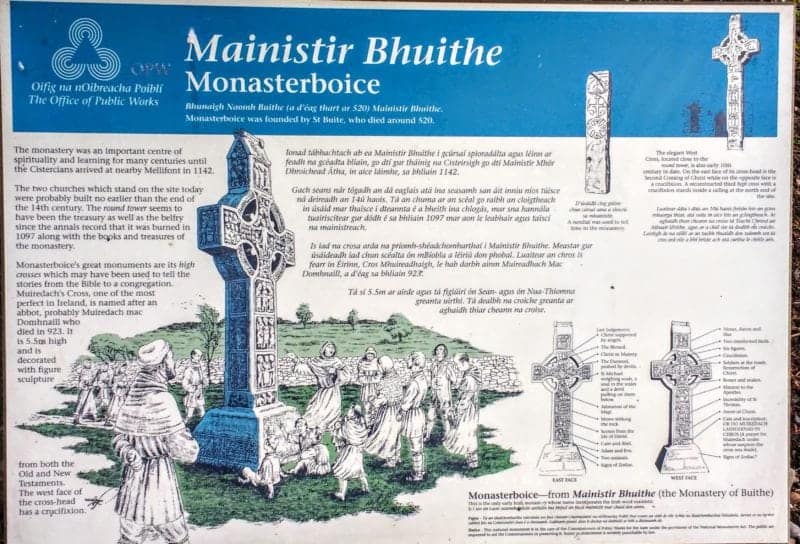 The site is best known for its collection of High Crosses. The three crosses include the South Cross (or Cross of Muiredach) and the West Cross (or Tall Cross). The northeastern corner of the graveyard is home to the simpler North Cross, which was probably smashed by Oliver Cromwell’s forces. It has only a few carvings compared to the first two. 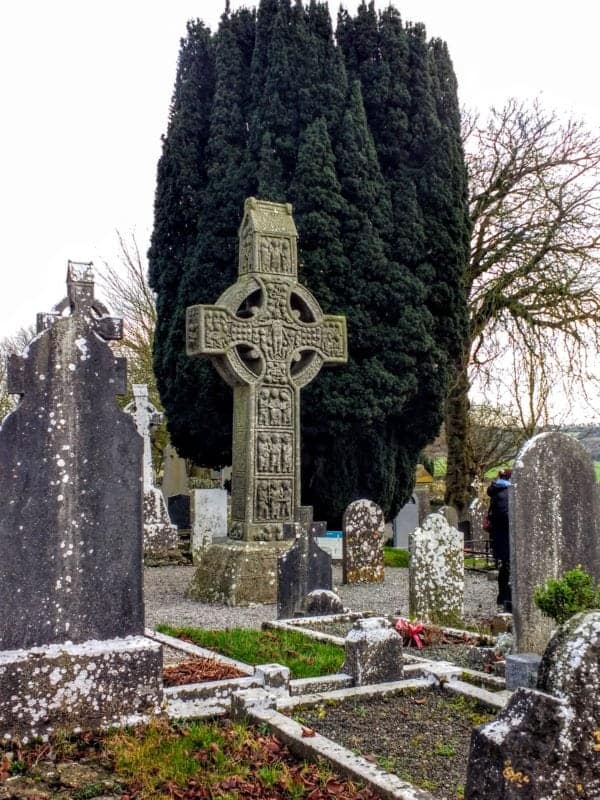 These crosses depict stories from the Old and New Testament that it is believed would have been used to educate early Christians, as there were no books or bibles at that time. Local volunteers will give you a tour of the site and take you through the images carved into these majestic crosses. These guides will also tell you the local legends such as on one side of the South cross head there is an image of a hand local tradition says that if you stand under the hand God will answer your prayers. 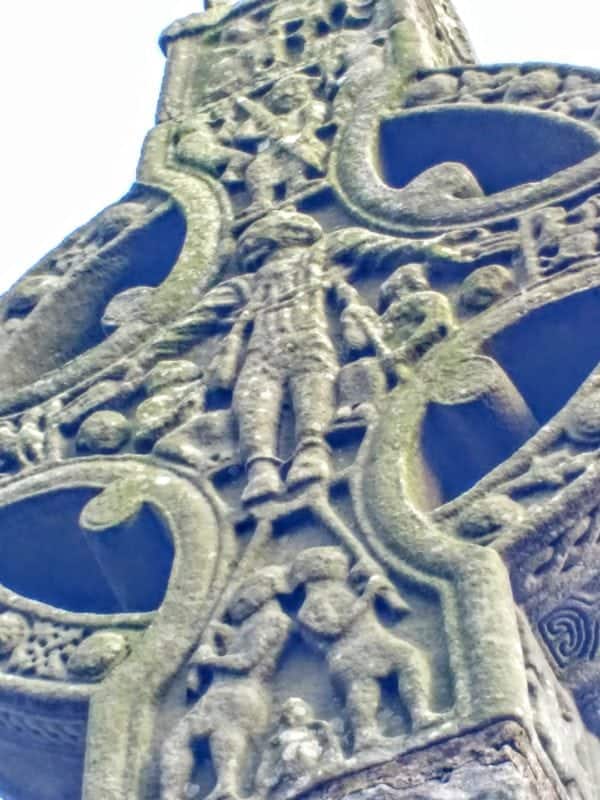 The West Cross has a well-preserved head but the stem is quite damaged. It is believed that the head of the Cross may have been stored indoors which has helped to preserve it as you see it now. The missing pieces are still considered a mystery but locals believe that those emigrating during the Great Famine took a chip of the stone to take a piece of Ireland with them.

43 of the best Irish movies to watch before you come to Ireland or to remind you of your visit.

There is evidence at Monasterboice that prior to its ‘founding’ by St. Bhuithe in the late six is said to have been founded by St. Buithe in the late 5th century it was a significant place for pagan Celts.

Vikings captured the settlement in 968 AD and were expelled by Donal, the Irish high king of Tara. St. Bhuithe’s Monastery was an important centre of spirituality and scholarship until the Cistercians arrived at nearby Mellifont Abbey in 1142, after which Monasterboice became neglected.

Monasterboice has many interesting features to explore, but the clear highlight is its superb high crosses. Like murals and church sculptures, these magnificent examples of Celtic art brought the Bible to life for those who could not read (which was most people).

Visit Ireland’s breathtaking Celtic Coast to the South of Dublin 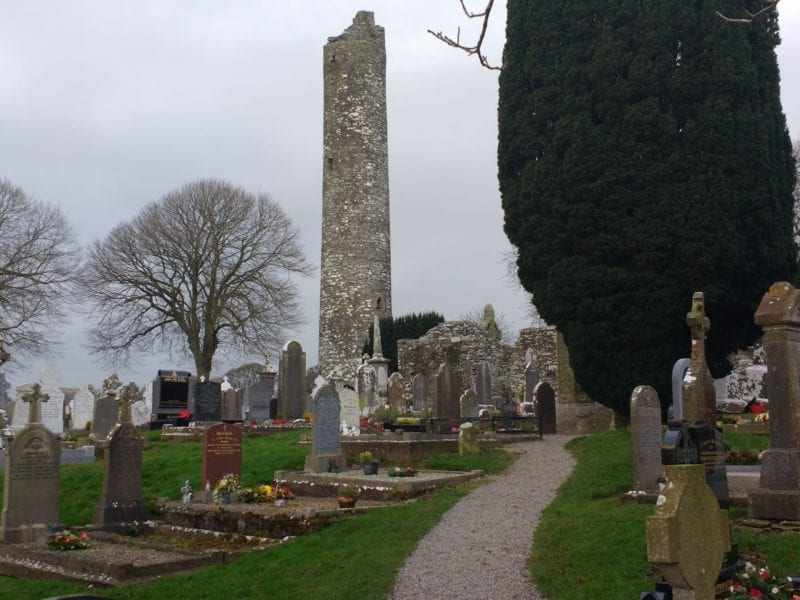 Monasterboice’s round tower is over 30m (110 feet) tall and was divided into four or more stories inside, connected with ladders. As with other round towers in Ireland, this was used as a belfry, watchtower, and a refuge for monks and valuables during times of Viking attack. Records indicate that the interior went up in flames in 1097, destroying many valuable manuscripts and other treasures. The tower is currently closed to the public. 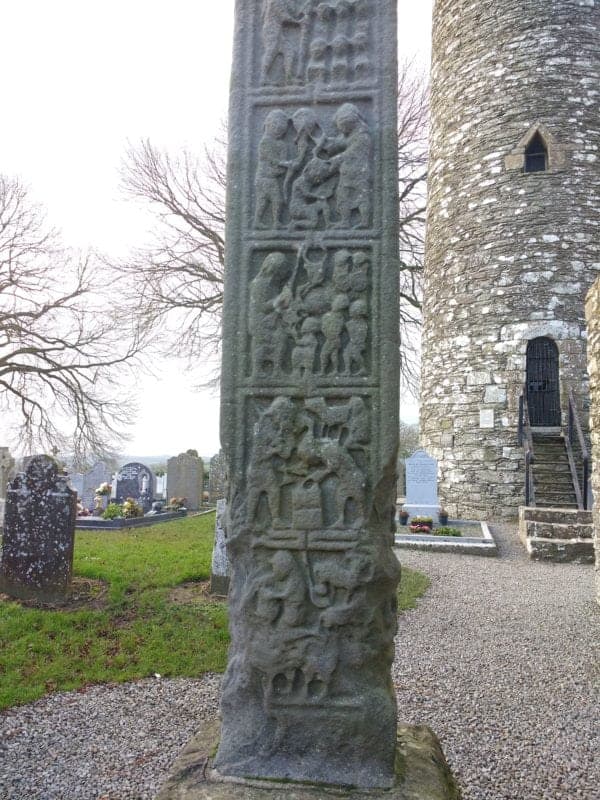 Most people have heard of the Book of Kells, which was found at the Abbey of Kells it remains one of Ireland’s greatest mysteries as to where it was created. Some believe it was made in Iona Scotland at the monastery established by St. Colmcille. The 9th century period was rife with Viking attacks and it is believed that the monks relocated to Kells in Ireland perhaps bringing the book with them. The book of Kells is now kept in the library at Trinity College where every day a new page is turned.

Kells Abbey is one of Ireland’s greatest monastic settlements. Gaelic Irish for Kells means “great residence,” and it was a royal residence much like the famous Hill of Tara. It wasn`t until the 6th century that Kells came to fame as a monastic settlement. St. Colmcille or Columba was granted Kells by the High King, Diarmuid McCarroll, who was a cousin of Colmcille and it is said that the two often fought and argued and the King gave Kells to him to make up for his actions against him.

Kells is most famous as the home to “Ireland`s finest treasure,” the Book of Kells. The book comprises of the four Gospels of the New Testament; it is a masterwork of Western calligraphy with complex and extravagant illustrations and ornamentation. The manuscript is brought to life with figures of humans, animals, mythical beasts, Celtic patterns and vibrant colours. The actual Book of Kells is now far too valuable to be left in an unguarded location so you can see it at Trinity College in Dublin where it is on display year-round. If you are interested in learning more about the Book of Kells read Maria’s account of her visit to Trinity College and the viewing of the book here.

Colmcille and Finnian (a fellow monk) were the unwitting contributors to the world’s first copyright laws. The two fought over the practice of transcribing of the first complete bible brought to Ireland by Finnian. Colmcille copied the book in secret so it could be shared but this angered Finnian who brought the issue to the King at Tara. This resulted in Diarmuid ruling against Colmcille and stating on the record, “to every cow belongs its calf, to every book its copy.” Essentially every copy of the book made belonged to the owner of the original book. 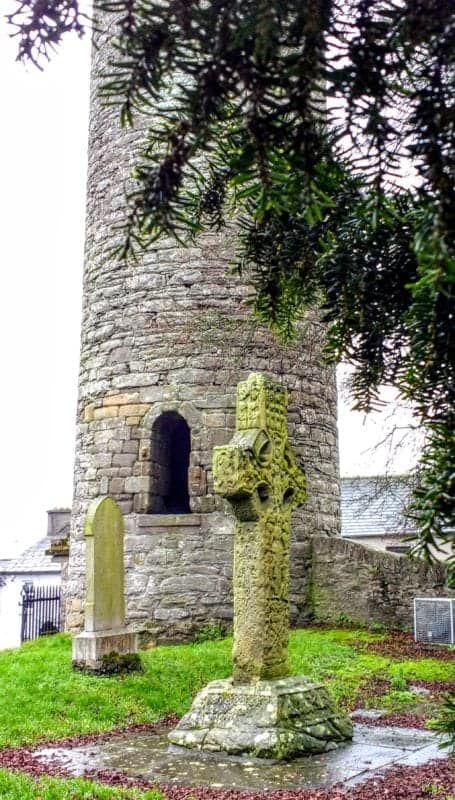 The monastery in Kells flourished and was hailed by Columban monks as the “Splendour of Ireland”. During this time many items that are integral pieces of Irish history were created here from the stone crosses, the Round Tower, “Columcille’s House“ and the completion of the Book of Kells in the 9th century. 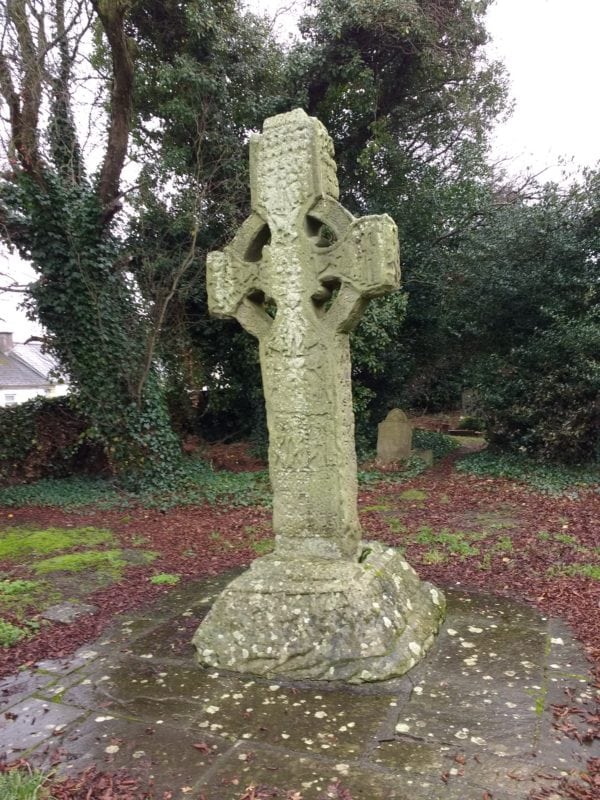 Generally, monastic settlements were surrounded by a circular boundary wall called a vallum, which acted as a frontier between the holy world within and the secular world outside. They often contained a church, graveyard, high crosses, monk`s cells and from the late 10th century round towers were built to house surplus goods, act as a refuge and a belltower. Both Monasterboice and Kells have a vallum wall around them. 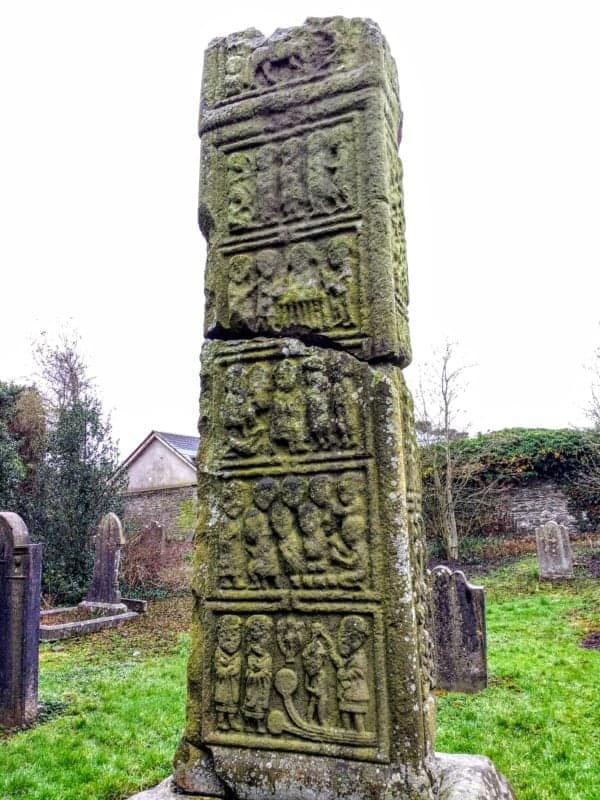 Kell’s round tower is roofless and stands at over 25 metres and in 1076 Murchadh Mac Flainn, who was fighting for the High Kingship of Ireland, was murdered in the tower. 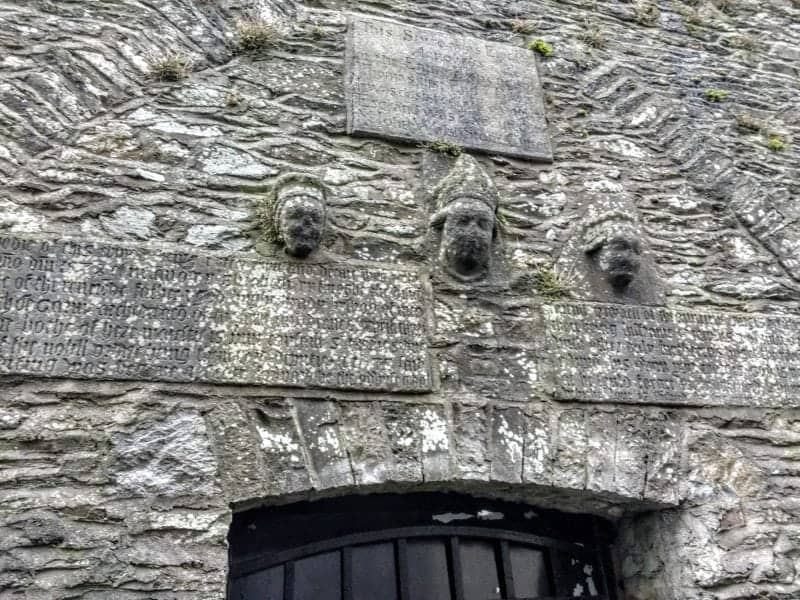 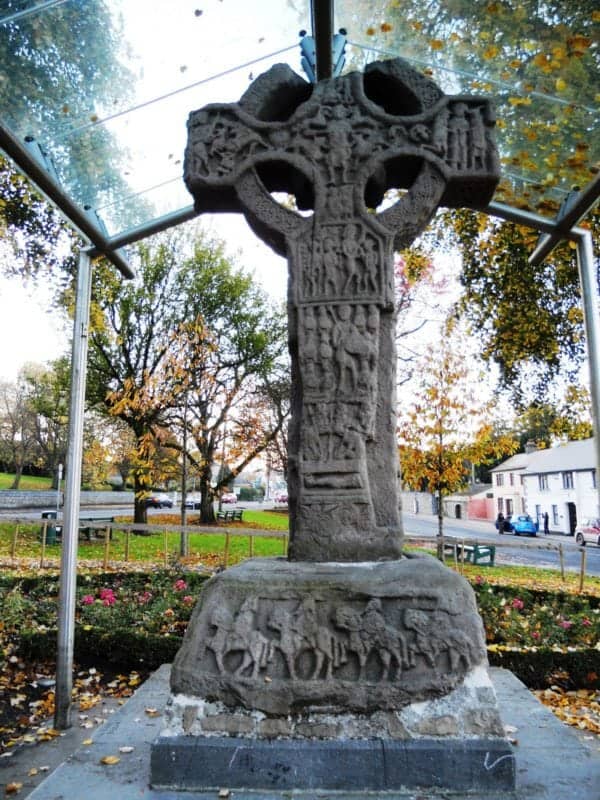 The Market Cross of Kells, which dates from the 9th century and depicts scenes from the Old and New Testaments, can be seen at the junction of the Navan & Dublin roads and the Slane road in front of the Kells Heritage Centre.

What’s your favourite place in Ireland been? Tell us about it.

Looking for more day trips from Dublin? Here’s a great list of places to visit.

Day Trip from Dublin: A holy well, Bective Abbey, and an Ogham Stone