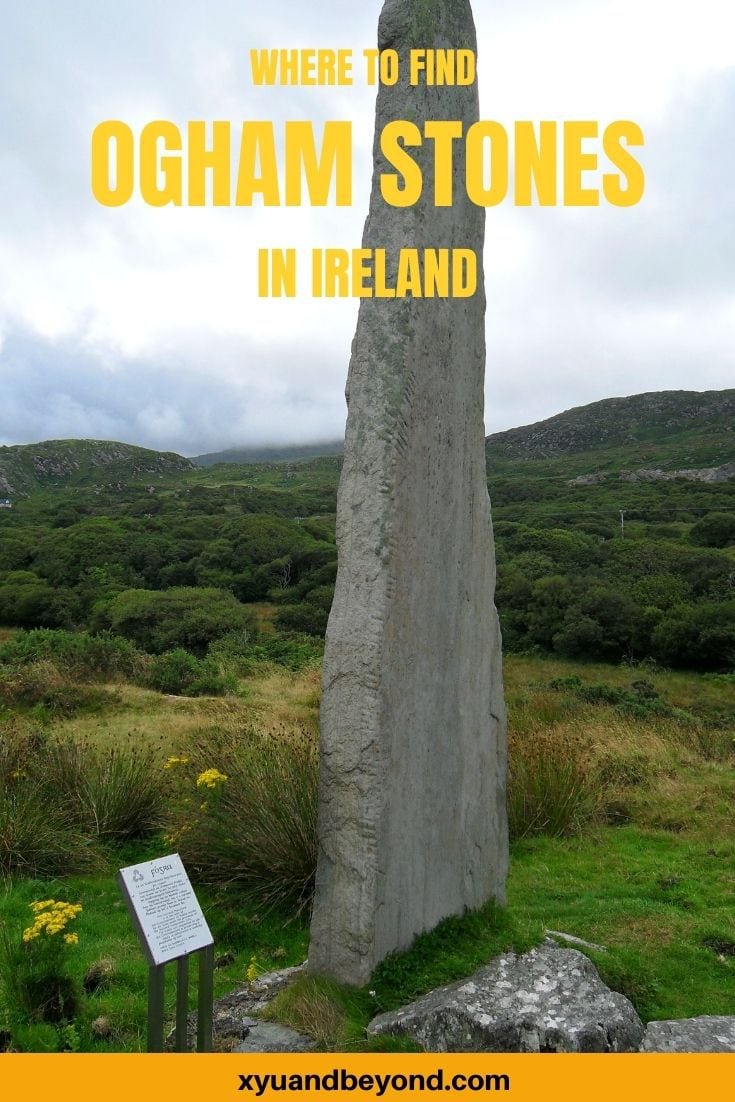 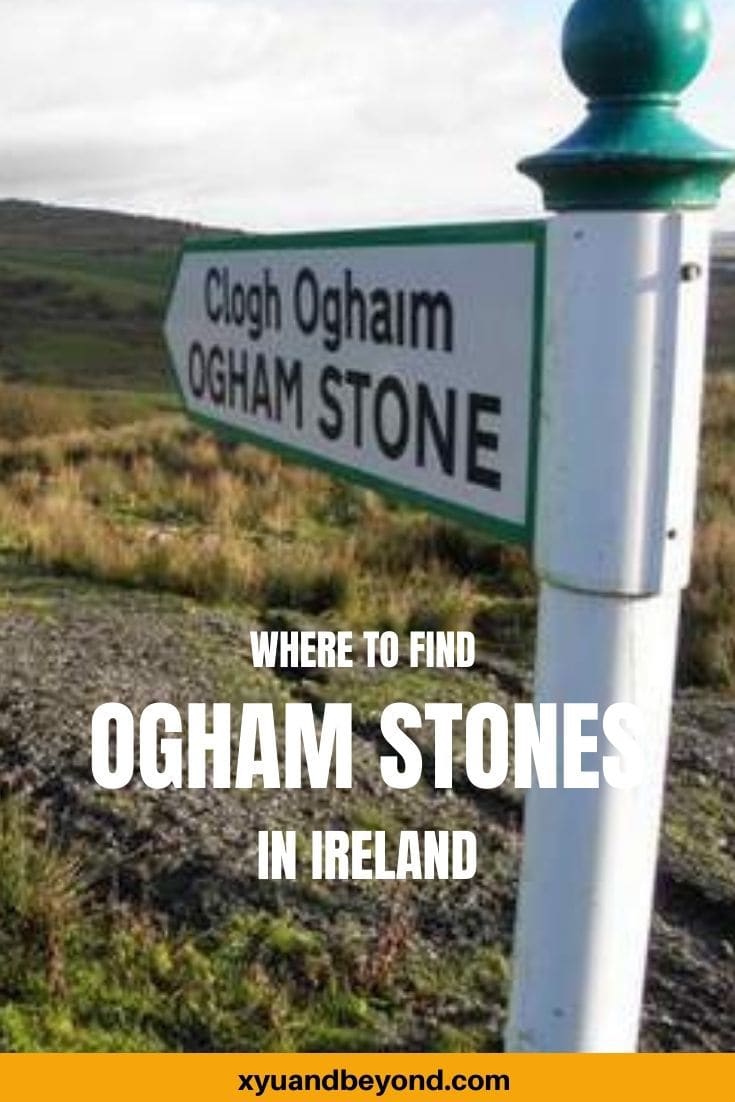 Where to find Ogham Stones in Ireland

Ogham is an ancient Irish (and British) alphabet, that consists of twenty characters formed by parallel lines on either side of or across a continuous line. It is the earliest form of writing in Ireland, dating back to the 4th century A.D. and was in use for around 500 years. The Ogham Stones in Ireland are found all over the country but dominantly in Waterford, Cork and Kerry.

What is Ogham stone writing?

The Ogham alphabet is made up of a series of strokes along or across a line. Ogham is sometimes called the “Celtic Tree Alphabet” because many of the markings are linked to ancient Irish names for particular trees. This writing was carved onto large standing stones which appear to be used to mark Early Irish laws which allow claims to a piece of land.

What were ogham stones used for? The early historians will often refer to the ancient sagas which tell of heroes who fell in battle and were buried beneath these stones. Some archaeologists say that the stones were erected prior to the invention of Ogham which was created to represent the Gaelic language.

How do you read an Ogham stone? Ogham stones were carved and read from the bottom up.

If you would like some jewellery imbued with Irish craftsmanship and featuring the Ogham language you need to head to Claddagh Design which has some seriously beautiful Ogham writing pieces.

Or if you would like an ogham stone ask at the Ogham Shop where you can find a number of truly stunning Ogham pieces.

Our Ogham stones are small replicas of real ones, with symbolic meaning, to bring a piece of Irish history and good luck to your home. Every single Ogham stone is unique, hand-picked from Wexford’s beaches, engraved with love and attention while maintaining the natural shape and colour of each stone.

Where are Ogham stones in Ireland?

How many ogham stones are in Ireland? There are around 400 Ogham stones in Ireland most of which date to the 5th and 6th centuries. Their language is predominantly Primitive Irish, but a few examples record fragments of the Pictish language.

Kerry has around 1/3 of the total of the Ogham stones in Ireland and in the Dingle peninsula, there are approximately 60 Ogham stones.

Beyond Ireland, Ogham stones can be found wherever the Irish settled such as Cornwall, Devon, Wales and the Isle of Man. In Scotland, there are many stones but they seem to be in Old Norse or Pictish.

History of Ogham Stones in Ireland

Historians and archaeologists believe that Ogham began in the southwest of Ancient Ireland and moved with the Irish who left the area. Sadly, many of the Irish Ogham stones have been re-used and found near churches and abbeys which indicates that they might have been incorporated into the Christian religions of the time.

Archaeological evidence suggests that the surviving Ogham stones in Ireland date back to the 4th to 6th centuries. The original form of ogham represented approximately 80 sounds from Gaelic, with 20 symbols arranged in four groups of five.

Ogham was developed during the Roman Empire and demonstrates the spread of its influence far beyond the Roman Empires’ frontiers. Ogham was not a fixed system of writing and the stones show modifications and changes as new symbols were added and older ones removed. There is also a Christian influence on some stones that have a cross carved on them or the word KOI which is believed to be a translation of the Christian Latin term for burial meaning ‘here lies’.

The language of Irish Ogham stones

The language of the Irish Ogham stones is dominantly what is called primitive Irish. Primitive Irish is the oldest known form of the Gaelic Languages.  It was discovered by translating the inscriptions on the Ogham stones of Ireland – which contained mostly names.

What were Ogham stones in Ireland used for?

Ogham stones appear to have primarily served as memorials and/or boundary markers as well as indicators of land ownership. The inscriptions themselves were usually carved along the natural edge of the stone, generally starting at the bottom left-hand side of the face and reading upwards, across the top and down the right-hand side (up-top-down).

The landscape of Ireland is full of uncounted standing stones which are also called Menhirs. Menhir is said to be a Breton word for ‘long stone’ and that is the term used in Brittany, France. The stones often have names such as “Cloghmore” which means long or broad stone in Irish –  cloch mór, or “Cloghadda”.

Where to see Ogham Stones in Ireland

Standing stones are haunting witnesses to Ireland’s ancient past. The Ogham Stones of Ireland give us a tiny look back at Irish history before books and writing came about.

To be near where these stones stand is almost spiritual, you can hear the waves of the Wild Atlantic Way rushing the shores. Stand in stillness in a field with only the sheep for company. Brave the wild winds on top of an Irish mountain just to feel where your ancestors may have been.

11 Ogham Stones in Ireland to visit

In 1861 UCC began collecting and displaying Ogham stones and it is free to see the stones. Situated with the North Wing Quadrangle Corridor you will see a row of beautifully preserved stones. These stones bar one are all from County Cork.

The cloisters contain a collection of Ogham Stones illustrating an early coded form of the Irish language. These are ancient gravestones, each one marking the burial place of a distinguished person in a Celtic tribe, a chieftain or a bard, and date from the second or third century of the Christian era – the period before Saint Patrick came to Ireland.

Between Beaufort Village and the Gap of Dunloe, you will find the Dunloe Ogham Stones. These stones stand in a circle of 8 in a small enclosure. It is believed that seven of these stones were originally the roof of an underground passage at Coolmagort, in Beaufort Village, that collapsed during the last century. The 8th stone in the centre of the circle was taken from Kilbonane, a ruined church that you can visit nearby.

National Museum of Ireland in Dublin

The Aglish pillar stone can be found here at the Archaeology Museum location on Kildare Street. The stone dates from the 5th-6th century and it originally stood at the monastic site of Aglish near Dingle, Co. Kerry. The stone bears a circle with a Maltese cross inside, an Ogham inscription, symbols and two swastikas. The stone is one of 24 on display in the museum.

The Ballycrovane Ogham stone in County Cork is said to be the tallest standing stone in the world at over 17ft high. Found on the headland south of Lough Fadda this tall thin stone does have an Ogham inscription but the stone itself pre-dates the inscription by over 2000 years.

The standing stone is located in a field on the top of the hill overlooking the harbour at the south side of Kenmare Bay. It is located on private land so you may have to pay a token fee to be able to visit.

It is believed that the inscription was placed on the stone from the 3rd-5th centuries AD. The inscription is now thought to recall someone called Deich and Toranus – the full Latin translation being: MAQI DECCEDDAS AVI TURANIAS which would be ‘Of the son of Deich a descendant of Torainn’ Historians believe that the stone may be an ancient dedication to the Deisi who were the tribe that inhabited Ireland during the 3rd to 4th centuries.

The Ogham Stone is situated in Keim Churchyard. The stone was found by someone digging a grave in the cemetery, it has been placed on a ledge, against the wall of the old church the inscription reads ‘COVAGNI MAQI MUCOI LUGUNI’. This writing is translated as Cuana son of the people of Lugh.

Several ogham stones are on display in the regional museum for the Corca Dhuibhne Gaeltacht – Músaem Chorca Dhuibhne, in Baile an Fheirtéaraigh village. Here you can learn more about the history of ogham and an exciting 3D scanning project.

This Ogham Stone stands overlooking Smwerwick Harbour. It can be found just off the route of the Dingle Way – Slí Chorca Dhuibhne, in Ballinrannig, close to Wine Strand and Béal Bán beaches.

This ogham stone was discovered in the foundation of the chancel of St Mary’s Old Church, during the rebuilding of the chancel. The stone was lying flat in the nave of the church but it wasn’t until 1489 that anyone noticed the inscription. The 1.50 metre high stone now stands up against the interior of the north wall, next to the altar steps. The inscription reads:

This ogham stone has been Christianised with the addition of a large cross carved at the bottom of the inscribed face.

This example of an Ogham Stone can be seen in the graveyard at Kilmalkedar in front of the ruined 12th-century church located on the Ring of Kerry. Stories tell us that the hole at the top of the stone was used by newly married couples to symbolize their union.

The ogham stones Waterford are located in the chancel of the cathedral are two of the three ogham stones that were originally found at this site. The ogham stone now standing in a small niche of the chancel, pictured below left, was found built into the east wall of the oratory, and has two inscriptions that read:

This Ogham Stone was found north of Thomastown Kilkenny in a field called the “monks field” which is on a tributary of the River Nore. It can be seen in the visitors centre at Jerpoint Abbey.

If you want to translate your name into Ogham go and check out the Ogham page. It only works really if you have a name that is listed many of which are Irish in origin. Or you can try the Ogham Translator. This is my name in Ogham

The Rock of Dunamase – visiting these magnificent ruins