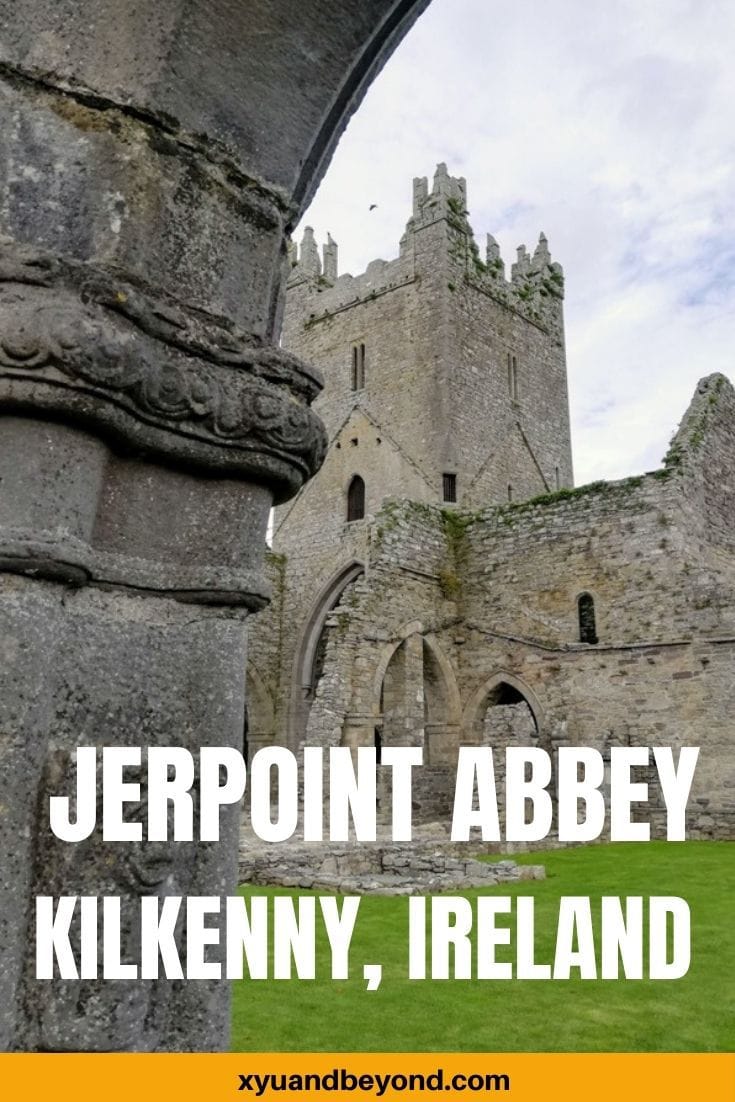 Discover the mysteries of Jerpoint Abbey

Jerpoint Abbey was on my bucket list for a long time and we took the opportunity to explore this Cistercian Monastery when we were housesitting in Thomastown, Co. Kilkenny. I do recommend renting a car outside Dublin as there are many sites you simply can’t get to without a vehicle.

Jerpoint Abbey is located very near Thomastown just south of Kilkenny. You can’t miss it as it can be seen from the N9 which is the main roadway in County Kilkenny.

How to get to Jerpoint Abbey

Jerpoint Abbey is roughly 2.5km (about a mile and a half) south of Thomastown, Co. Kilkenny, on the N9, and is accessible by car and bus (Bus Eireann) actually has a bus that runs on Thursdays between Thomastown and Waterford, stopping at Jerpoint.

Jerpoint Abbey is an OPW Heritage Site and admission is included if you have purchased the card. Tickets for adults are €5.00, for groups/seniors €4.00, for child/student €3.00, and family €13.00 if you haven’t purchased a card.

Historians and archaeologists believe that Jerpoint was founded during the 12th century by the King of Ossory, Donal Mac Gilla Patric was possibly the founder of Jerpoint abbey…as a Benedictine monastery. It was inhabited by Cistercian monks 20 years later.

The original emphasis of Cistercian life was on manual labour and self-sufficiency, and many abbeys have traditionally supported themselves through activities such as agriculture and brewing ales. What is interesting about Jerpoint Abbey is that the Cistercian order was known to be very austere and the Jerpoint Abbey buildings are highly decorated with incredible carvings and artwork that was not very Cistercian.

According to the guides at the Abbey, there was so much work to be done that the Abbey housed two kinds of monks. There were the lay brothers who did 90% of the manual labour and the Choir monks who did 10% of the work and spent the rest of their time in prayer.

Choir monks came from noble families and brought money with them when they joined the order. They were educated and spent most of the day in prayer and learning. They worked mainly within the abbey walls and once they joined the Abbey rarely left its confines.

Lay brothers came from poor backgrounds, and undertook most of the manual labour, often spending their week at out-lying farms returning to the abbey only on Sundays. While the order claimed they treated these equally, in reality, they had a lower status and had to sit separately within the church, eat different meals and lived in different buildings.

Although time has taken its toll on the many ruins of Ireland, Jerpoint Abbey is a unique historic site with its beautiful stone carvings and cloister arcade which still contain stunning stone carvings. The ruins of Jerpoint Abbey date from several time periods. The tower dates from the 15th Century. The Church from the 12th and the chapels all vary in age.

After the Dissolution of the Monasteries by Henry VIII Jerpoint Abbey was given to the 9th Earl of Ormond and became primarily a graveyard or place of interment.

While Jerpoint Abbey is a very well kept ruin you may not be familiar with everything there is to see so take advantage of the extremely knowledgeable guides when you visit. Here are some areas you should see when visiting Jerpoint.

This is the cross-shaped building on the north side of the cloister and it is a typical Romanesque building from the 12th century. Within the chancel and transepts are some remarkable stone coffins with detailed carvings.

These stone tombs have detailed carvings of their occupants which include Felix O’Dullany the first abbot of Jerpoint and some of the Butler Family who owned Kilkenny Castle.

On the side of these stone tombs you will see the beautifully carved “weepers” they are known as. These are usually apostles, saints – such as St. James, St. Michael, St. Peter and angels (Gabriel) and they are carved holding something that was meaningful to the person entombed.

The pillars at Jerpoint Abbey are beautifully decorated with stone carvings on the sides of the pillars and small carvings at the base. It is believed that the cloister was built during the reconstruction of the 15th century.

When Jerpoint Abbey was restored in the 1950’s many of these were restored and when the visitors centre was established displayed in exhibits.

In the Chapter House, the monks observed a strict vow of silence. The Chapter House now houses a small exhibition of the decorations and stonework from the Abbey buildings restoration works.

Included in the Chapter House is a display of an Ogham Stone.

This Ogham Stone was found north of Thomastown Kilkenny in a field called the “monks field” which is on a tributary of the River Nore.

It is hard to imagine how vibrant and alive these frescos must have been in their day. These faint traces of a 15th or 16th-century painting can be found on the north wall of the church. These frescos tended to be paintings of benefactors to the Abbey but research is still being conducted on the Jerpoint Abbey Fresco.

Is actually a lost medieval town that was believed to have been founded in the 12th century at the main crossing of the River Nore. Its nearness to Jerpoint Abbey makes it one of the most important sites in the study of medieval settlements in Ireland and its visible remains are currently under study by historians and archaeologists.

Jerpoint Park is where you will find the remains of the lost town of Newtown. It was a vibrant bustling town with around 27 houses, a woollen mill, tannery, brewery and a courthouse.

There were two water wheels and a tower house that stood near the marketplace. The ruined church is named after St. Nicholas who inspired the stories of Santa Claus who is said to have been buried here in the 12th century.

According to the local stories, two crusaders brought Nicholas’s remains to Ireland when they left the Holy Land Crusades. Another version of the story tells of a French family, the de Frainets, who removed Nicholas’ remains from Myra to Bari, Italy. The de Frainets were crusaders to the Holy Land and also owned land in Thomastown, Ireland. After the Normans were forced out of Bari, the de Frainets moved to Nice, France, taking the relics with them. When Normans lost power in France, the Nicholas de Frainets packed up once again, moving to Ireland.

There is a very unusual gravestone in the Churchyard that has an image of a Bishop said to be St. Nicholas carved onto the stone along with two other heads which are believed to have been the two crusaders.

You can tour Jerpoint Park for €8 per adult and the tour lasts around 30 minutes. The tours are self-guided and you can take tea in the Belmore House Tea Room within the park.

Have you visited Jerpoint Abbey? What was your impression?

Traditional Irish food 25 of the most popular Irish dishes