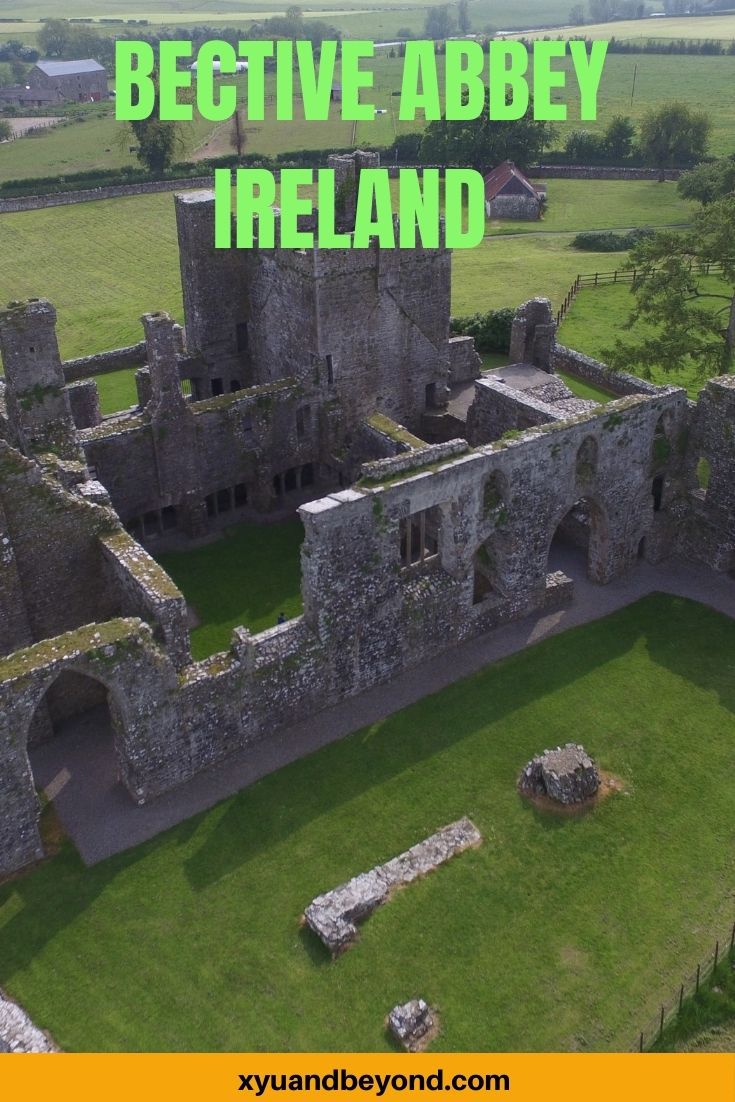 Bective Abbey is a Cistercian abbey ruin on the River Boyne in County Meath.  It was founded in 1147 but apparently, most of the ruins date to the 15th century. The ruins include a 13th-century church, a 15th-century cloister and a 16th-century tower. It was considered a “daughter house” to Mellifont Abbey.

Bective Abbey was built by Murchadh O’ Melaghin, King of Meath, for the Cistercians, and was dedicated to the Blessed Virgin. It was an abbey of some importance as the Abbot was a spiritual lord and sat in the Parliament of the Pale.

Murchadh O Melaghlin’s territory stretched from the midlands to the east coast and he reigned for forty-seven years.

When the Anglo-Norman lord Hugh de Lacy, Lord of Meath, was killed in 1195 his body was buried in Bective but his head was brought to St Thomas’s Abbey, Dublin. The two monasteries fell out over who had the right to de Lacy’s remains until the Bishop of Meath intervened in 1205 in favour of St Thomas’s. The Abbots of Bective were involved in disputes with other Cistercian houses such as Mellifont, Co. Meath and Jerpoint, Co. Kilkenny.

Archaeologists discovered heraldic floor tiles at Bective that bore the arms of Gearoid Mór Fitzgerald, the 8th earl of Kildare, and they believe that the early 16th century renovations were done under his ownership of Bective.

The drive to Bective from Dublin is just under an hour and it is an example of an Abbey that reveals much of Irish history throughout time. The earliest ruins are plain and austere and the later additions in the late 15th century are much more ornate. The tower house built at this time indicates the status of the Abbot who lived there. During the Dissolution of the Monasteries, the Abbey became a private estate and dormer windows were added along with elegant chimney stacks and finer living quarters.

In 1386 men of Irish birth were barred from entering any monasteries and so the community that populated Bective Abbey were Anglo-Norman.

The cloister which is a covered walkway used for prayer and reflection and the buildings used by the monks for everyday life was re-built in the 15th century.

A large defensive tower was built above the south range of the abbey in the 15th century, a reflection of troubled times in the English Pale. After Bective Abbey and its 1600 acres of land were confiscated in 1536, as part of the campaign by Henry VIII to control the wealth and power of the church, the complex was converted into a great mansion with the insertion of new fireplaces, chimneys and large stone windows.

Together with nearby Trim Castle, Bective Abbey was used as a location during the shooting of Mel Gibson’s 1995 historical action-drama movie Braveheart, the Cloister was used for the scene with the Princess and her maid.

The remains that are now visible at the Abbey date mainly from the 13th to 15th centuries. They include the church, chapter house and cloister. The cloister ruins are particularly well-preserved and feature pointed, gothic arches typical of Cistercian architecture.

Sadly nothing remains of the early 12th-century monastic buildings the earliest stoneworks include 5 bays on the south arcade and date to 1274. The cloisters are however beautifully preserved and a trip to Bective Abbey in the beautiful surroundings of County Meath is well worth a visit.

Another story tells the tale of a man called Downes who hailed from Navan. When he emigrated to America he had a dream of gold being buried in an old Abbey ruin. He returned to Ireland and attempted to find the gold at Bective Abbey, but no one knows if he found the gold and returned to America as he was never seen again.

Have you been to Bective Abbey yet? Did you dream of the gold buried there?

How to visit Monasterboice the finest High Crosses in Ireland