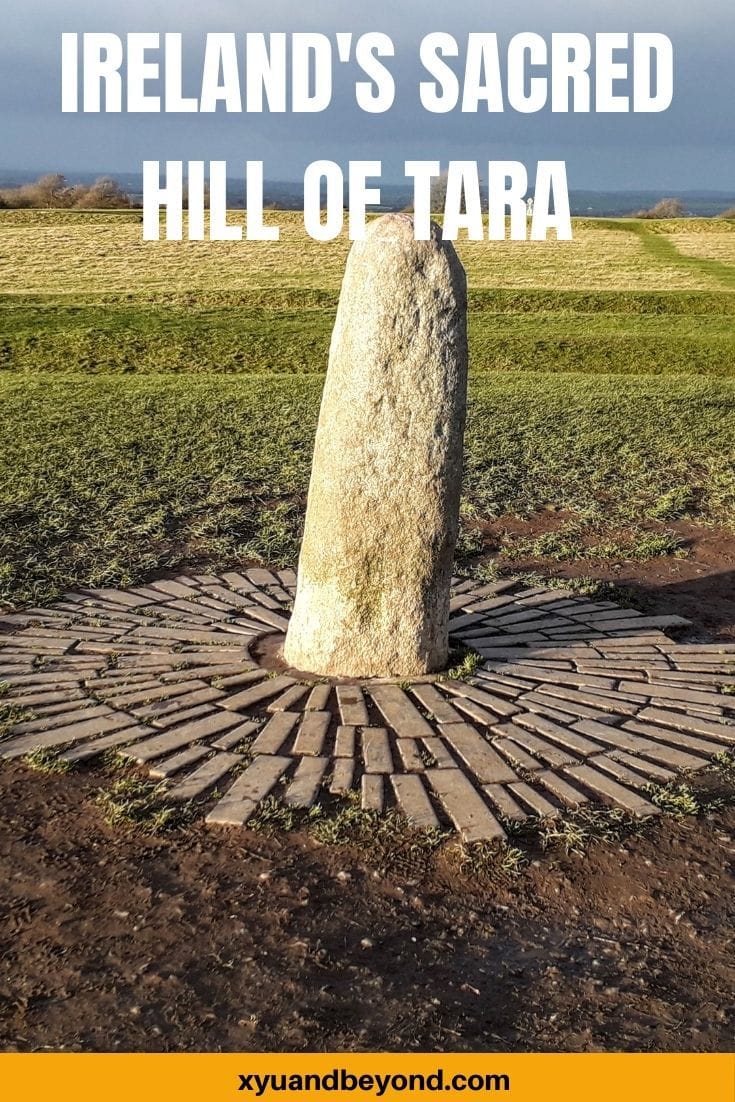 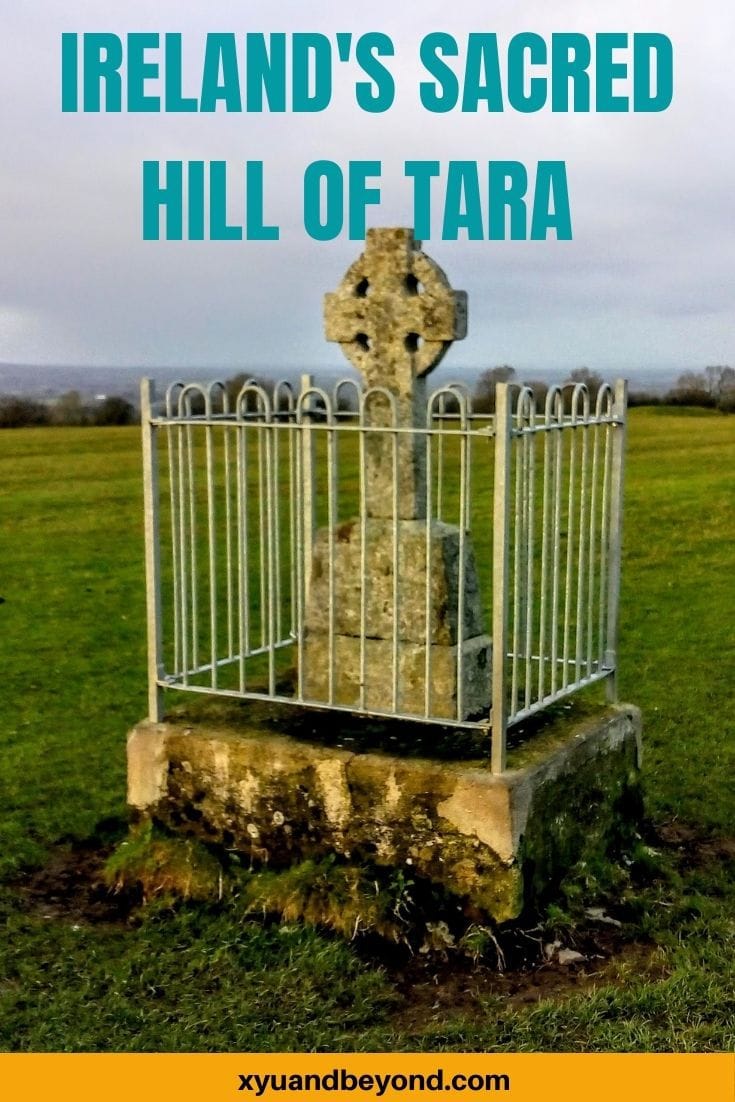 One of the most revered and ancient historical sites in Ireland is the Hill of Tara in County Meath, the ancient Irish seat of the High Kings. It is a huge site that is continually being investigated archaeologically. Tara encompassed the Rath of the Synods, The Mound of the Hostages and the Stone of Destiny or the Lia Fáil. This is one of the top attractions in Ireland.

The Hill of Tara, known as Temair in Gaeilge, was once the ancient seat of power in Ireland – 142 kings are said to have reigned there. In ancient Irish mythology, Temair was a sacred place for the gods and was the entrance to the otherworld. Saint Patrick is said to have come to Tara to convert the pagans to Christianity.

When was the Hill of Tara built? The Hill of Tara dates back to the late stone age when a passage tomb was built there. The site became truly important by the Iron age which was from 600BC to 400AD and up into the early Christian period when it became the seat of the High Kings of Ireland.

There is a church and graveyard on the hill. Tara forms part of a larger ancient landscape and Tara itself is a protected national monument under the care of the Office of Public Works.

The site of Tara, it has been discovered, has revealed a huge wooden henge, said to be even bigger than Stonehenge and would quite possibly be the size of a football stadium which means it would have been seen on the skyline for many miles around.

It is haunting being surrounded by this landscape and these megaliths, something this old full of legends and myths reminds us of why we visit Ireland.

Tara is often referred to as the mythical and ceremonial heart of Ireland and has been compared to the pyramids in Egypt and Stonehenge or Avebury in England. to England’s Stonehenge and Egypt’s pyramids. The site is associated with Celtic gods such as Lub and the goddess Medb. Tara was believed to be the entrance to the otherworld.

One of the legendary High Kings of Celtic Ireland was named Niall of the Nine Hostages in recognition of the fact that he held hostages from all the provinces of Ireland and from Britain.

What to see at the Hill of Tara

According to Mythical Ireland the Lia Fail or “Stone of Destiny” was brought here by, the Tuatha Dé Danann, as one of their sacred objects. It was said to roar when touched by the rightful king of Tara.

How old is the Hill of Tara? Tara was an important site long before the High Kings. A passage tomb known as Dumha na nGiall (meaning ‘the mound of the hostages’) is the oldest visible monument and dates from around 3,000 BC.

The “Mound of the Hostages” is a megalithic ‘passage tomb’ like Newgrange and is the oldest monument on the hill, and one of Ireland’s most famous historical sites dating to around 2,500BC. The name “Mound of the Hostages” comes from the custom of Kings keeping important people or family members from other royal families as hostages to ensure that the families followed the King’s rule.

A fairy tree in Ireland is usually a Hawthorn tree or an Ash tree. The trees can be spotted as they stand alone and are usually surrounded by large stones to protect the tree. No one is ever sure about how the stones got there but they are not to be moved as it would cause the fairies to take their revenge.

You can spot the trees looking for ones that stand alone and are covered in small rags and tokens. These are left there in the hope that the fairies will grant the wishes of the person who hung the item. Sadly one of the trees at Tara has fallen over due to the weight of some items and other trees are suffering from items tapped into the trunks like coins which are poisoning them.

In the churchyard at Tara, there are two standing stones, which are believed to be quite ancient. Saint Patrick’s, is on the eastern side of the hilltop. The “Rath of the Synods” was partly destroyed by the building of its churchyard. The church you see today was built in 1822–23 on the site of an earlier one.

The earliest evidence of a church at Tara is a charter dating from the 1190s. In 1212, this church was “among the possessions confirmed to the Knights Hospitallers of Saint John.  A 1791 illustration shows the church building internally divided into a nave and chancel, with a bell tower over the western end. A stump of wall marks the site of the old church today, but some of its stonework was re-used in the current church. The building is now used as a visitor centre operated by the Office of Public Works.

The taller of the two stones is thought to feature a figure of the Celtic fertility god Cernunnos and is similar to many of the ‘Sheela na Gigs found across Ireland.

Directly beneath the Hill of Tara a massive temple was discovered by archaeologists. Huge posts numbering around 300 surrounded the temple. What was eventually discovered was on the crown of the hill of Tara there was a substantial oval-shaped monument measuring nearly 200 metres wide. It is believed that the monument dates from 2500 to 2300BC. Located just below the ground surface there are no existing plans to dig it out.

How to get to the Hill of Tara Ireland

If you have rented a car and are driving from Dublin take the R147 to the Boyne Valley. At junction 7, take the R147 exit to Skryne/Johnstown. At the roundabout, take the 1st exit onto R147. Take a right at the sign for the Hill of Tara. Continue up the hill until you reach your destination on the left. The Hill of Tara is in Castleboy in County Meath and it is around 30 minutes from Newgrange and 20 minutes from Trim.

Tickets to visit the Hill of Tara

The cost of entry to the Hill of Tara is free but if you want a fantastic guided tour you can arrange that from the Visitors Centre which is the Church located on the walk up to the Hill. The cost of the tour is Adults: €5.00 and children €3.00.

Contrary to popular belief the Tara Brooch was not found at the Hill of Tara but on a beach near Bettystown not far from Drogheda in 1850. It was called the Tara Brooch by a jeweller who bought it and used the name as a marketing tool for the copies they made for tourists.

You can of course buy Tara replica brooches all over Ireland. I love a brooch or a pin whatever you want to call it and I do love this Tara Brooch it’s silver-plated and it contains amber and glass beads.

Have you visited Ireland yet? What was your favourite place to visit?