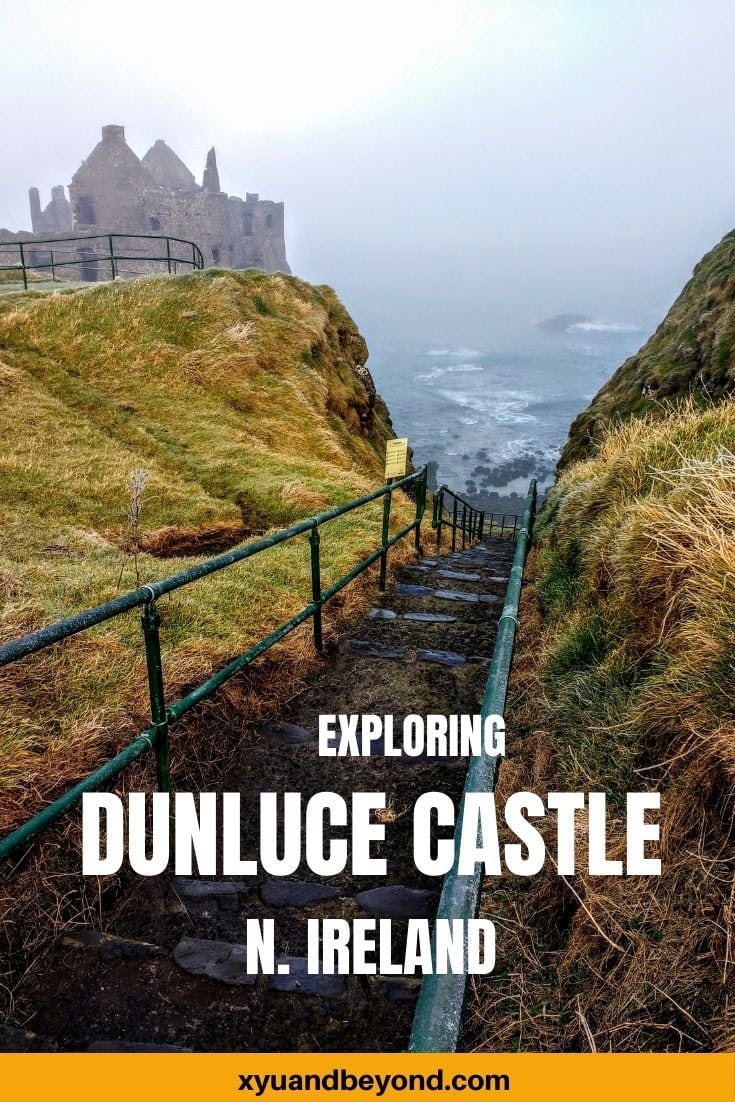 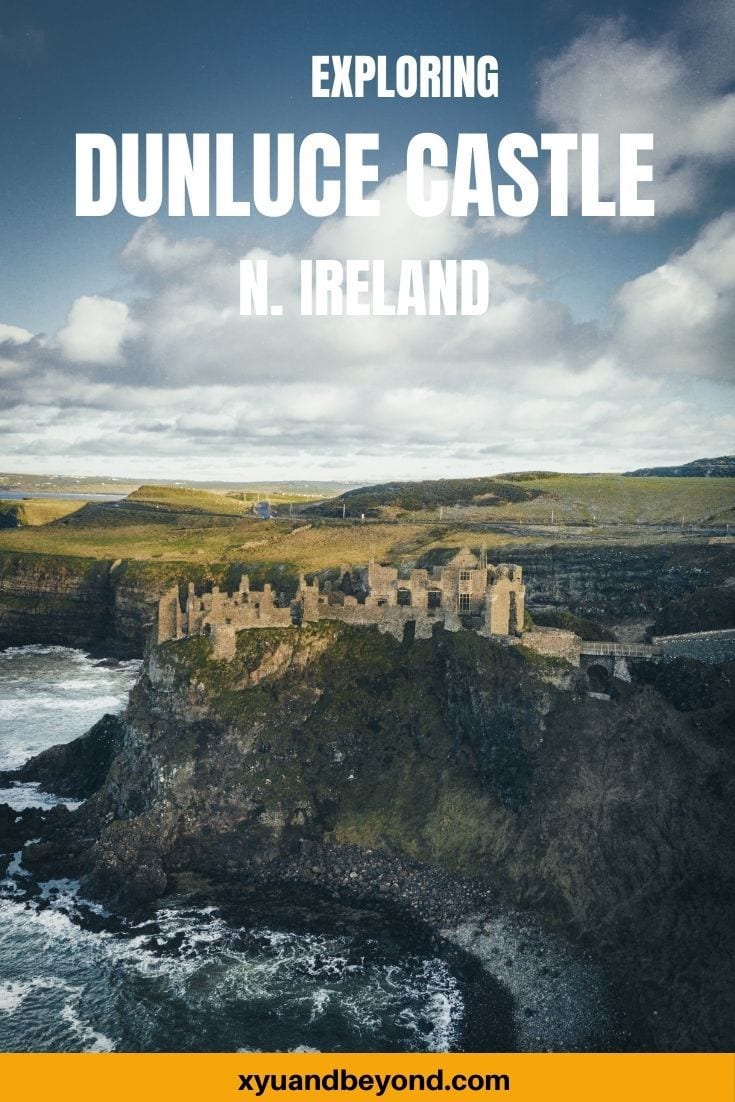 Dunluce Castle (Dún Libhse) has always been special to me, it’s where my father proposed to my mother and it’s a place where I’ve been many times.

Dunluce Castle sits on the top of a crumbling Northern Irish cliff on the very edge of the Sea of Moyle. One of the leading attractions on the Causeway Coast Dunluce has been a source of legends and stories dating back centuries.

No one knows what the original name means. ‘Dunluce’ translates as ‘fort of the fort’, but the meaning of the earlier name ‘Dunliphis’ is a mystery.

Xyuandbeyond is reader-supported. When you buy through links on our site, we may earn an affiliate commission.. You can read my privacy policy here.

Dunluce Castle’s first castle was built by the Irish noble Richard Óg de Burgh in the thirteenth century, but the earliest documented records from 1513 show that at that time it belonged to the MacQuillan family before being taken by the MacDonnell family. Today the Castle is still owned by the MacDonnell’s but it is in the care of the Northern Ireland Environment Agency.

Richard Óg was the most powerful of the Earls of Ulster, he was a friend of King Edward 1 of England and his daughter (Eleanor) was to become the second wife of Robert the Bruce. However Richard, being King Edward’s friend helped Longshanks lent his army to the British King to invade Scotland.

Eleanor became the mother of the future David II of Scotland, but her father Richard was driven from Ulster when Robert the Bruce’s brother Edward invaded Ireland. However, Richard gathered his forces from Connaught and drove the Scots out winning Ulster back for the Normans. He died on 29 July 1326 at Athassel Priory, near Cashel, County Tipperary.

In 1550 James McDonnell established himself in the Glens, where the McQuillans had ruled since 1400. The McQuillans were defeated in battle by Sorley Boy McDonnell in 1580 and he confiscated the lands including Dunluce Castle.

In 1603 the English began the Plantation of Ulster and Sorley Boy’s son Randal McDonnell was created Earl of Antrim. In 1636 Randal dies and was buried at Bonamurgy Friary in Ballycastle. His son Randal inherited the lands of Dunluce and he and his wife relocated to Ireland.

The Marchioness of Londonderry who eventually became heir left the castle to Winston Churchill along with the Estate of Carnlough.

The haunting of Dunluce Castle

Historians and archaeologists do not believe the local legend of the kitchens falling into the sea during a storm. Research and paintings of the castle from the 18th and 19th centuries show the castle was completely whole with kitchens during the time frame it is said that the building started to collapse. However, claims are still made today that the screams of the kitchen staff can be heard over the waves of the Sea of Moyle.

Maeve Roe, who was the only daughter of Lord McQuillan was kept a prisoner in the north-eastern tower because she refused to marry Rory Og. One wild and stormy night she is said to have escaped to the Mermaid’s Cave with her true love Reginald O’Cahan. They attempted to escape by rowboat but were drowned when their boat was smashed into the cliffs. Maeve’s ghost is said to be the Banshee of Dunluce Castle and her troubled soul looks out across the sea searching for her lost love.

CS Lewis is reputed to have taken inspiration from Dunluce Castle for the Royal Castle of Cair Paravel in the Chronicles of Narnia.

If you are watching the Game of Thrones series, you may recognise Dunluce as the reaver stronghold of Pyke on the Iron Islands.

During World War II, the site was occasionally used as a lookout to monitor shipping.

Archaeologists in the past 5 years or so have uncovered a town across from where the Castle stands which was of course known as Dunluce. It was designed to rival Coleraine. Unfortunately, in 1642 the Irish rebels attempting to capture Dunluce Castle and losing set fire to the town and burnt it down.

Excavations have discovered a cobbled street stretching through the town towards the castle, with a blacksmith’s forge. They have also found coins from the reign of Elizabeth 1 and Charles 1 as well as bone combs, dress fastenings, gaming pieces, wine glass stems, a bronze tuning pin for a harp and other household items.

The dig uncovered a Scottish merchant’s house, built in the first two decades of the 17th century, fronting onto the cobbled streets. The walls survive to waist height with plastered walls, an internal privy and a fireplace. The town also held a courthouse and a dungeon.

How to get to Dunluce

Dunluce Castle is situated in the County of Antrim in Northern Ireland. It is near Bushmills and is about 3 miles outside of Portrush.  It is easy to get to if you have rented a car or take a Causeway Coast Tour but if neither of those options appeal and you love a good walk you can get to Dunluce Castle via a train from Belfast.

The train journey from Belfast to Dunluce will take around 2 hours and you will get off the train in Portrush. Dunluce Castle is about 3.5 miles east of Portrush and is about an hours walk through some of Northern Ireland’s most magnificent scenery. A taxi from Portrush to Dunluce will cost around £15 one way.

What to See at Dunluce Castle

Dunluce is reached by a narrow bridge that leads to the Castle. There is a free parking lot on the site.  There is a small café and coffee shop – The Wee Cottage on one side of the parking lot where you can get a great cup of tea and a scone or something more substantial if you are hungry.

When you get to Dunluce and going through the gates you will see a small building where you can pick up your entry tickets to Dunluce Castle. There you can find handouts and guides to the castle including some historical information.  You reach the medieval castle ruins by crossing a small bridge.

There is a small building to the right which houses some artefacts and provides further information about the history of the castle. There is disabled access throughout the castle site.

Within the Castle, you will find plaques that describe the various functions of the rooms within the ruins.

Below Dunluce Castle, there is a massive cave, known as the Mermaid’s Cave. The cave is actually a huge cavern, more than 25 meters under the castle.

To reach the cave you walk down the 115 steps beside the castle. This is very steep and can be quite slippery depending on the weather. The cave is absolutely huge and offers some magnificent views of the Sea. The cave is included in your entry fee to the Castle.

What does it cost to visit Dunluce Castle

Dunluce Castle is open daily from 10 a.m. to 5 p.m., except on Christmas Day and Boxing Day (25 and 26 December). You can buy tickets to access the site when you arrive – but keep in mind that the last entrance is at 4:30 pm.

Getting Married at Dunluce Castle

You can get some absolutely stunning wedding photos at Dunluce Castle if you decided you want to get married in Northern Ireland. Epic Love photography will take care of all the details for you.

Where to stay near Dunluce Castle

Since there are no BnB’s near Dunluce Castle your best bet is to stay in either Portrush,  Bushmills, or Port Ballintrae. I would also highly recommend Ballycastle as it is one of my favourite places in Northern Ireland and if you have rented a car from here it is really easy to get to many of the sites on the Causeway Coast and there are some great places to eat and stay in the Town. Not only that but you can take the ferry across to Rathlin Island and if you visit at the right time of year you will get to see puffins nesting on the island.

This bright and spacious 2 bedroom cottage is located close to the beautiful beaches of Portballintrae and White Rocks. The majestic Dunluce Castle is a 15/20 walk from the cottage and Bushmills the local village made famous for its whiskey is a 5-minute drive. The Giants Causeway and Carrick-a-Rede rope bridge are approximately 15/20 min drive making the cottage a great base to explore everything the North Coast has to offer. There is a lovely sunny garden and plenty of parking.

A luxury apartment with ocean views, 1 mile from Bushmills & Dunluce Castle almost next door to one of Ireland’s most famous golf Courses the Royal Portrush.

Plenty of activities, places to see, dining out and local culture, all within a five-minute walk. The Giants Causeway, The Bushmills Distillery, the Northwest 200 Motorcycle Race and the International Air Show are some of the areas top events.

Located in a quiet cul-de-sac Saltstars is perfect for families. There are 2 patios, one of which is fully enclosed. Garden furniture and a gas barbeque is provided. Nearby there are 3 sandy beaches (5, 10 and 15 min walk), the Giant’s causeway (20min walk) and Portrush golf club (30 min walk/5 min drive). The main living room has a gas fire. In the kitchen, there is an additional seating area with settee and access to the garden via patio doors.

The Lambing Shed is a newly refurbished, cosy one-bedroom apartment located at Walkmill Farm just a 10-minute stroll to the picturesque village of Bushmills, right in the heart of the World Famous Causeway Coast.
It is right on the banks of the River Bush, at the Walkmill Waterfall, where there are fantastic scenic walks, whatever the season. The apartment has all the ‘mod cons’, including a log burning stove – perfect for those winter nights!

Wee Bush Cottage is a beautifully appointed Grade II Listed cottage in the conservation area of Bushmills. This beautifully decorated cottage is located in the heart of the village and is situated close to the bank of the River Bush. We are minutes away from The Giant’s Causeway, Carrick-a-Rede Rope Bridge, Dunluce Castle & Ballintoy Harbour ( where Game of Thrones was filmed ) and Bushmills Distillery is just a 2-minute walk away. Perfect for a romantic getaway for 2.

River Bush View is located in the heart of the village of Bushmills, situated on the banks of the River Bush. Minutes away from The Giant’s Causeway, Carrick-a-Rede Rope Bridge, Dunluce Castle & Ballintoy Harbour (Game of Thrones filmed here) and Bushmills Distillery just outside the front door. This is a private room in the loft which  has a pitched roof so there is a height restriction in certain areas so not really suitable for tall people). They have another room available called Salmon Leap which can accommodate 4 people per night.

What to see near Dunluce Castle

Dunluce Castle is situated on the Causeway Coast Route and the Giant’s Causeway, is a short drive away. The natural wonder is a World Heritage site made up of 40,000 stone columns that formed thanks to volcanic activity a mere 60 million years ago.

Don’t forget to visit Carrick-a-Rede rope bridge, a little further away up the Antrim coast. An adrenaline junkies dream crossing the rope bridge to Carrick Island is not for the faint-hearted.

Have you done the Causeway Coast Route yet? If not when do you plan to do your dream trip to Ireland and see it? 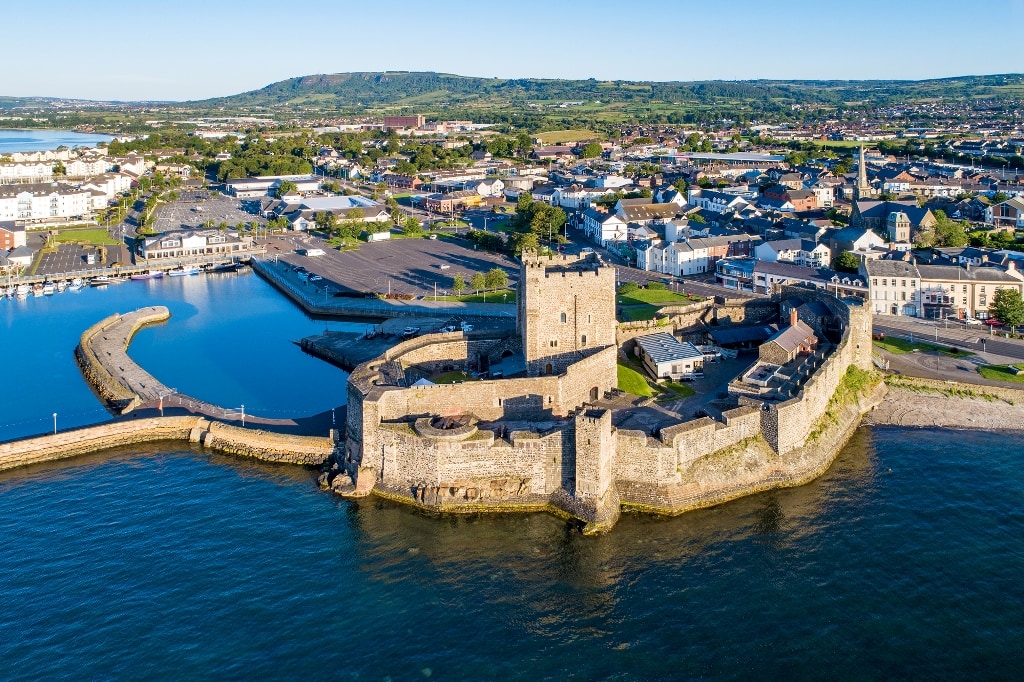 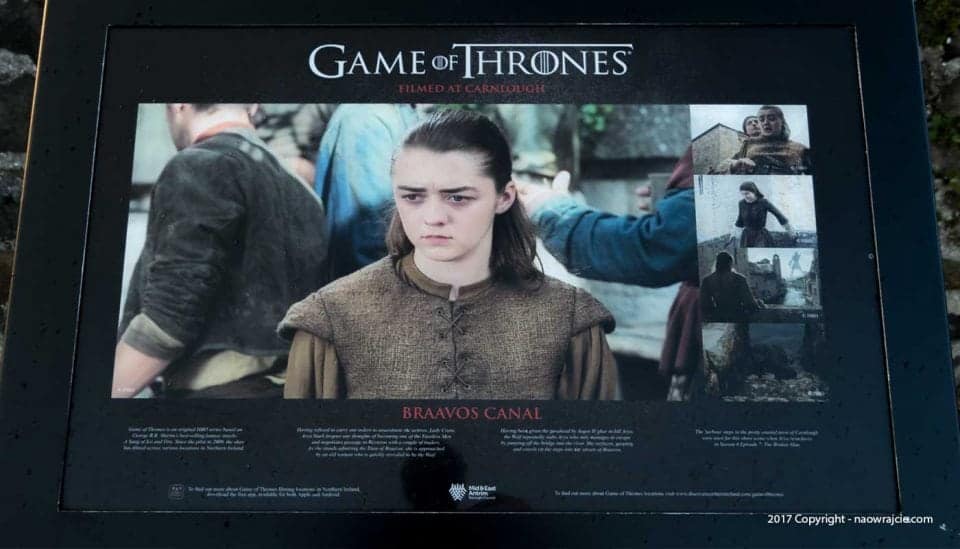 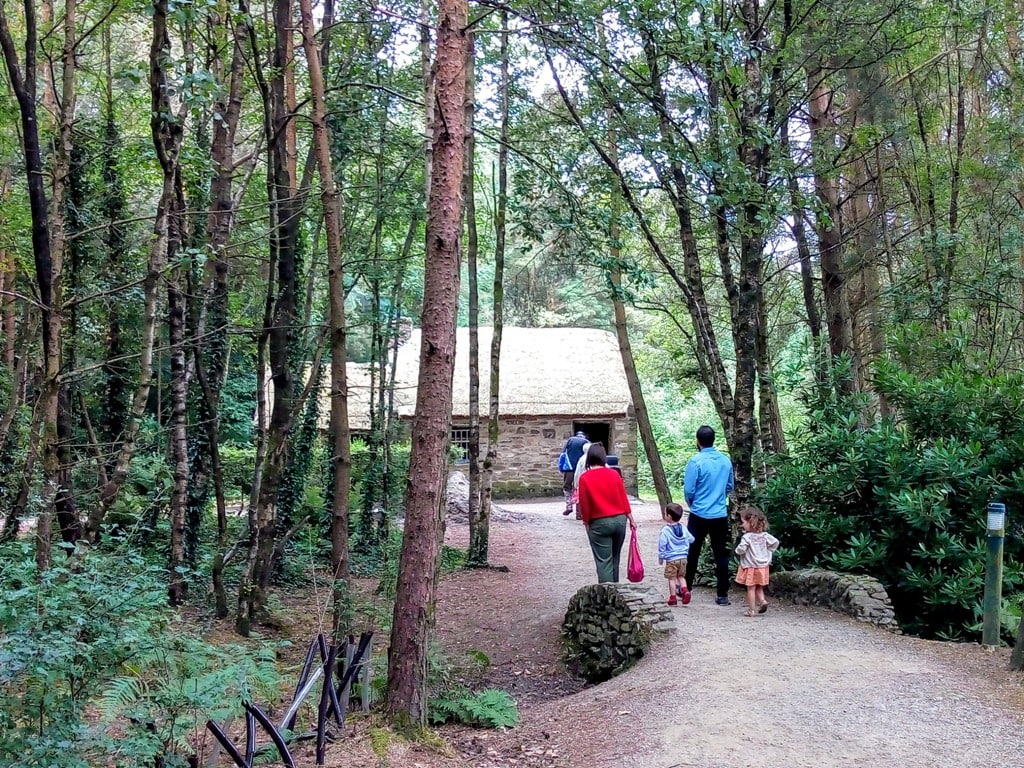 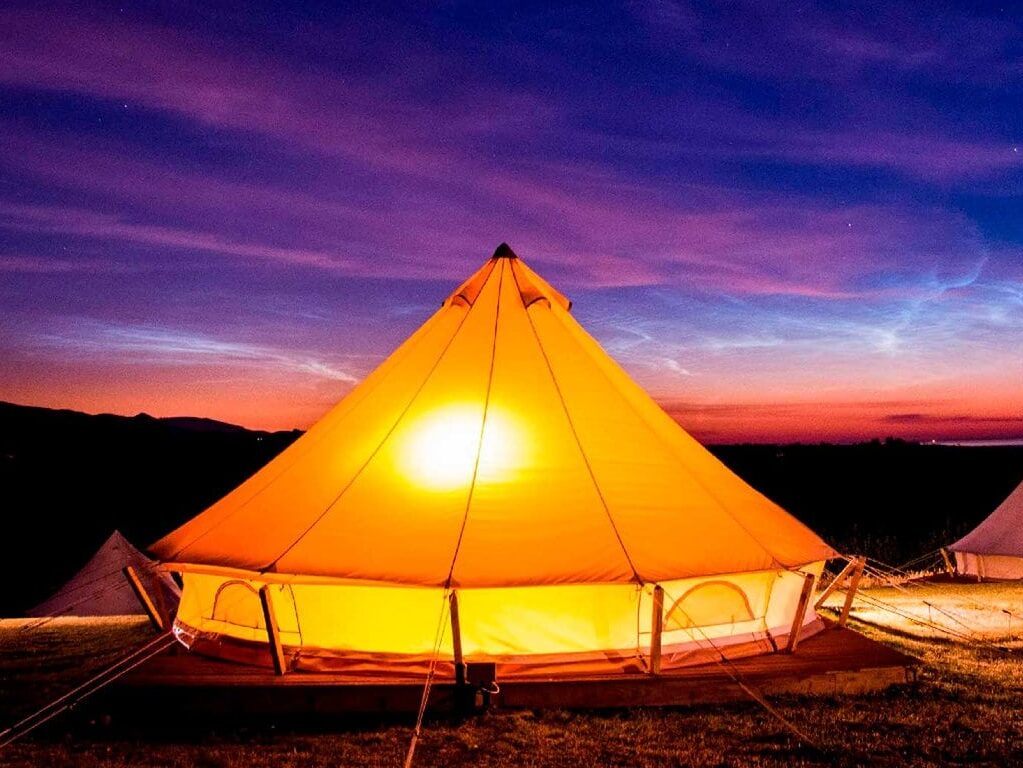 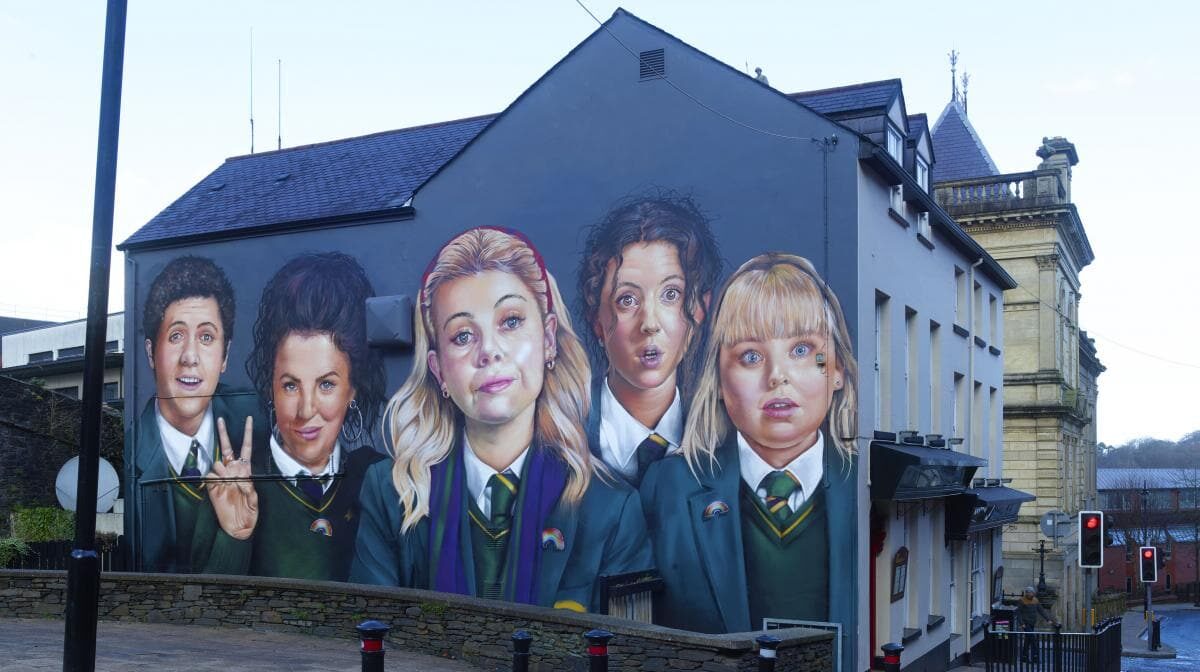 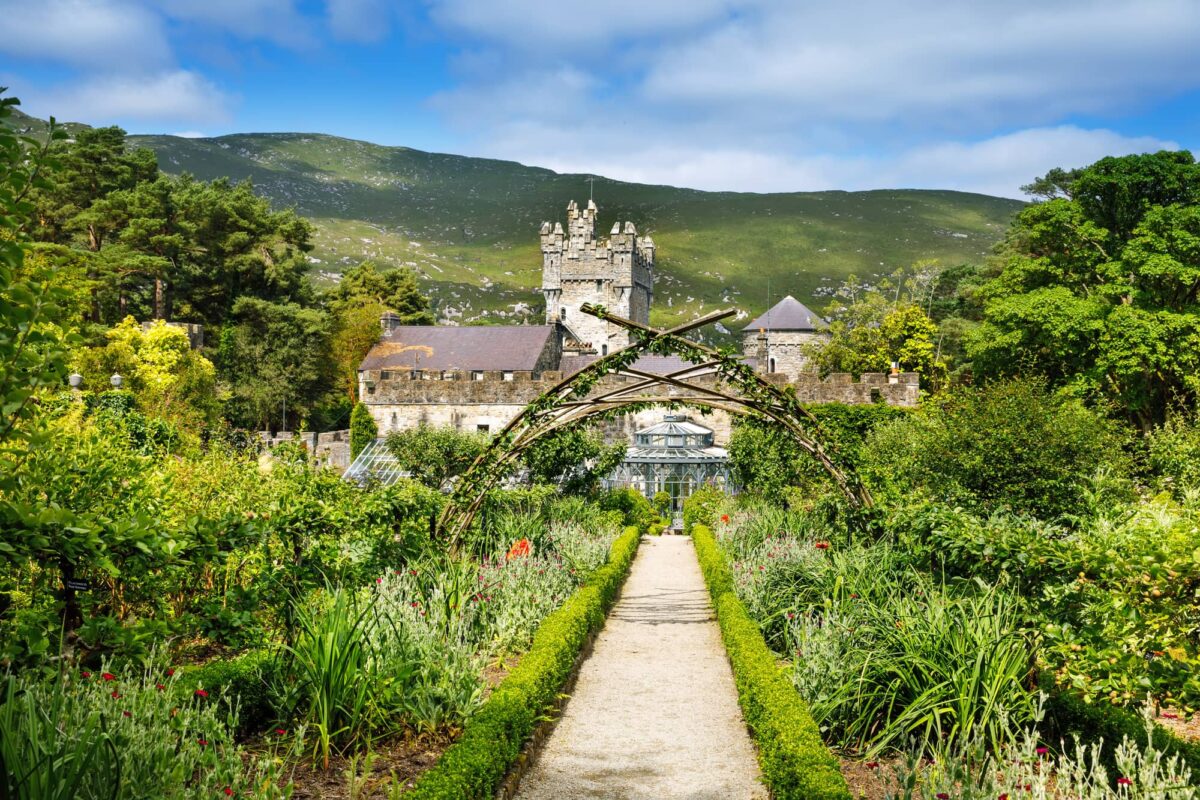 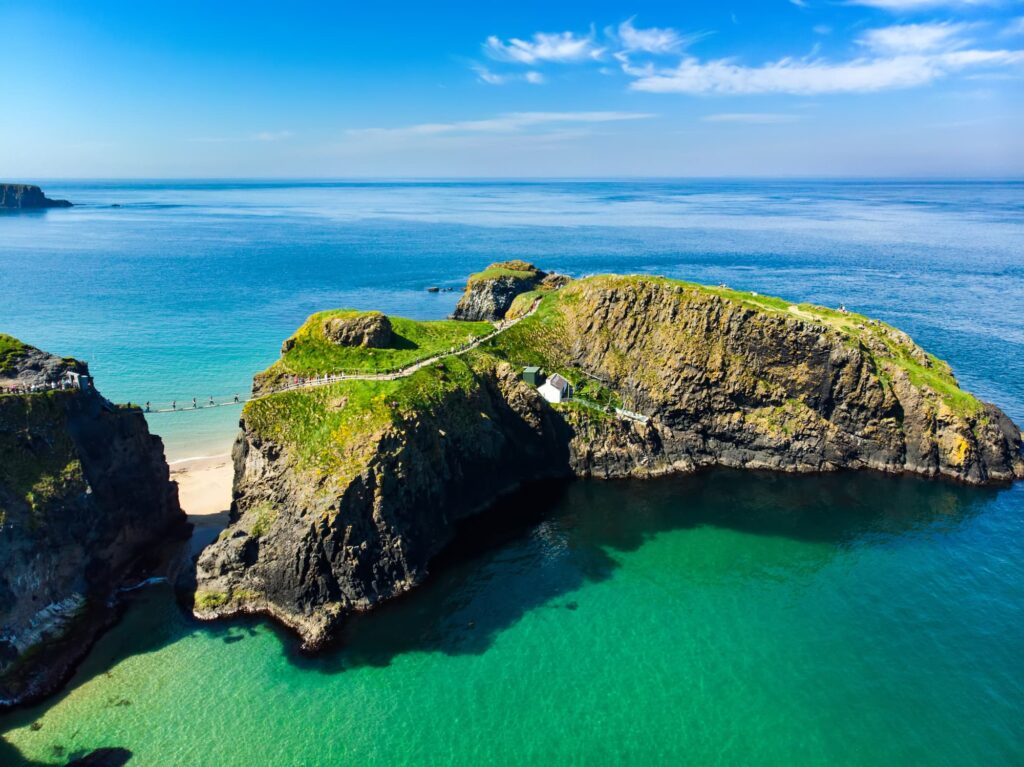