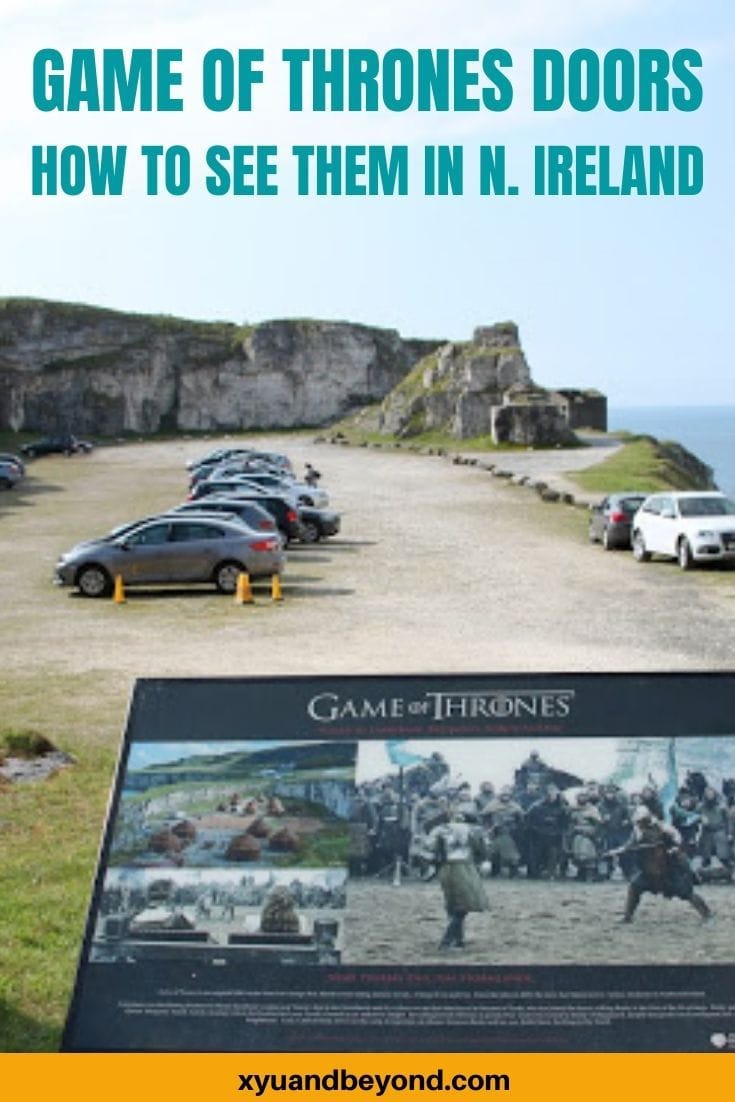 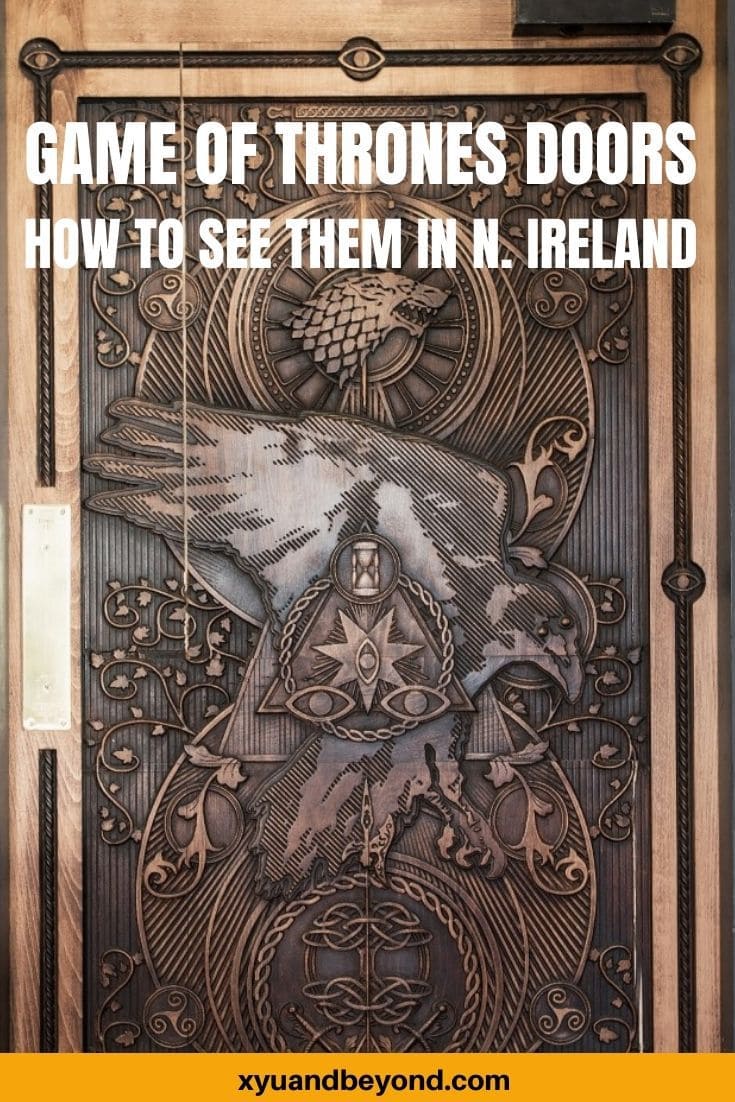 Where to see the 10 Game of Thrones Doors Northern Ireland

Planning on visiting all the Game of Thrones doors in Northern Ireland? The Doors are a truly unique and unusual experience and you can only see them in various sites around Northern Ireland.

The Doors of Thrones came about after 6 years of filming the Game of Thrones in Ireland had become part of the local culture and environment. If you are planning your perfect weekend in Northern Ireland you may want to add some of these to your bucket list.

What Are The Game Of Thrones Doors?

In 2016 storm Gertrude hit Northern Ireland and the damage to the Game of Thrones trees Northern Ireland or as they are known here as the Dark Hedges knocked down several of these ancient trees.  Instead of using the trees for firewood they were salvaged and turned into 10 intricate and unique doors that depicted detailed scenes from Game of Thrones season 6.

Visiting The Dark Hedges or rather The Kings Road is a must. They are located in Ballymoney near Armoy. Tucked into the Bregagh road the ancient beech trees were planted by the Stuarts in the 18th century. The hedges were used for the scene of Arya Stark’s escape from King’s Landing on the orders of King Joffrey.

In the Game of Thrones, it was the Dark Hedges that stood in for the King’s Road and these days the Hedges has become a tourist hot spot. The rows of beech trees were planted over a hundred years ago to impress visitors as they approached the entrance to the Georgian mansion, Gracehill House. Sadly these trees are starting to die off naturally as they don’t live much longer than 100 years.

These beautifully carved and embellished doors became known as the Game of Thrones Doors or officially the Doors of Thrones and they were placed in small hotels and pubs around Northern Ireland. You can collect photos of the Doors of Thrones on your Journey of Doors Passport when travelling around N. Ireland.

The passport can be found at all of the Game of Thrones doors locations – just ask the staff member in the location and they will be happy to provide a passport for you and even take a photo of you with the door. Don’t forget to have the staff stamp your Journey of Doors passport to make your visit ‘official’.

Where are The Game Of Thrones Doors Located?

The Game of Thrones doors are located all around Northern Ireland, most are along the Antrim Causeway Coast in locations used for filming the Game of Thrones. These doors are found in local pubs, hotels and restaurants and are the pride of many a local community.

Many of the locations have staff that are full of stories about the cast hanging out for a pint or a particular day’s filming events. So make sure you stop and have a pint and a chat.

If you are planning to spend a week or so in Northern Ireland you will easily have time to visit all 10 Game of Thrones doors. If you are on a limited schedule, there are certain doors that are more easily accessible and easier to visit than others.

Door # 4 is located in Enniskillen which borders Donegal and could be a bit of a long trip if you don’t have much time. If you have the time though the area is a fabulous place to visit and you can see Derry and enjoy the Wild Atlantic Way through Donegal to travel further south.

The 10 Game of Thrones Doors

#1 The Cuan Tour of Doors – Strangford, County Down

The Cuan is a fantastic inn and restaurant in Strangford (which is one of the prettiest towns in Ireland) about an hour south of Belfast. We loved Strangford and took a trip across the lough on the ferry from Portaferry to do our ultimate Game of Thrones Road Trip.

We stopped at the Cuan for lunch and had an absolutely to-die-for meal and then perused the various souvenirs and costumes from the Game of Thrones filming. The Cuan is where the cast of GOT actually stayed during filming. Nearby you will find Castle Ward and Audley’s Castle filming locations.

This door depicts the show’s opening title sequence as well as a map of Westeros. It also reminds you of the state of play between the warring Houses at the close of Season 5.

To be honest I wasn’t impressed with the Fiddler’s Green pub as the staff were pretty obnoxious. The door of course was superb and depicted the conflicts within the Houses of Bolton and Greyjoy. There is a Kraken rising from the bottom of the door and the Flayed Man of Bolton at the top.

Located at the foot of the Mour#er writer, artist and entertainer, Percy French, composer of the famous song “The Mountains of Mourne”.

The intricately carved Door of Thrones 3 depicts a direwolf above Winterfell surrounded by a looming battle on the horizon.

Nearby you can visit the Tollymore Forest which was the setting for the Haunted Forest and also where the Starks found their Direwolves in season 1.

#4 Blakes of the Hollow – Enniskillen

Blakes of the Hollow in Enniskillen is both a pub and a lower-level restaurant that is brilliant. You can’t miss the Door when you enter the pub and the staff are incredibly friendly and will invite you behind the bar to get a better photo.

The door depicts House Targaryen’s return to power while certain elements also refer to their recent past misfortunes. Above it, all keeping a watchful eye is the white falcon of House Arryn.

Established in 1852, this award-winning Limavady pub retains all the charm and character of the way a traditional pub should be and features the Tour of Doors #5. On this door, the dreaded Night King and his followers the White Walkers command the dead. Below this, rests the Stark Sigil entwined in branch and root, preparing for the inevitable attack between the living and the dead.

Here at the Fullerton Arms, they have Game of Thrones Door 6, depicting Season 6 Episode 6, and even a special room dedicated to the show, including a custom-built throne for you to sit on!

Door 6 at the Fullerton Arms in Ballintoy champions House Targaryen, specifically, Daenerys’ most aggressive and fearsome dragon, Drogon. It depicts Dothraki stallions in his grasp signifying their allegiance and willingness to follow their Queen across the Narrow Sea.

Just a stone’s throw from the Dark Hedges and the 9 Glens of Antrim, you’ll find the Dark Hedges Estate with 3 bars, 2 restaurants, a hotel, and Gracehill House the original Georgian mansion. The Estate is a historic hotel with a bar and restaurant and you can see door ‘#7 here. This door depicts the three-eyed raven and several sigils. At the base of the door, a beech leaf sits within a crown, a reference to the beech trees of The Dark Hedges.

Once one of the smallest bars in Ireland, Mary can be found in the coastal village of Cushendun. This cosy little hidden gem has an extensive whiskey and gin menu waiting to be explored, and when there, why not pull your own pint!

Tour of Doors #8 has carved into the centre of the door Valar morghulis. Valar dohaeris which is a High Valyrian saying that means “all men must die,” and it’s usually answered with the phrase Valar dohaeris, meaning “all men must serve.” This door chronicles Arya Stark’s journey in the free city of Braavos. In the centre rests the Faceless Man Coin that originally brought her to the city. Below that sits Needle, a reference to the final deadly confrontation that leads Arya to her decision to return home to Winterfell.

Ballygally Castle is a 17th-century Irish castle complete with ghosts that has been restored as a luxury hotel.

The door here depicts the ‘Battle of the Bastards’  and symbols of both House Stark and House Bolton. Swords and shields litter the door like a bloody battlefield. You’ll see the battle-scarred face of the Stark direwolf dominating over the flayed man below suggesting a House Stark victory, but at a very heavy cost.

The final Door can be found at The Dark Horse in Belfast.  Protected by earth ramparts and the city walls, the area where the Dark Horse now stands was convenient to the old iron foundry, the pottery, the whiskey merchants and the Brown Linen Hall.

Door # 10 depicts Westeros’s state of affairs as Season 6 draws to a close. The Lannister lion reigns over the Sept of Baelor, signifying its destruction along with the deaths of hundreds of King’s Landing nobles, including some of House Tyrell and the Faith Militant. At the bottom of the door, you’ll find Stark and Targaryen sigils, alluding to the revelations about the possible parentage of Jon Snow.

Or you can take a tour from Dublin or Belfast to see some of the major Game of Thrones sites.

While you tour Northern Ireland on your Journey of Doors, you can use a brilliant phone app to show you where all the Game of Thrones filming locations can be found.

Where To Fly Into When Visiting The Game Of Thrones Doors

If you want to visit the Game Of Thrones doors and Game of Thrones filming sites you can fly into Belfast or Dublin and drive from Dublin up to Northern Ireland, alternatively you could take the ferry from the UK or Scotland.

If you are in Dublin the drive North will take roughly 1.5 hours to get to Belfast. Make sure if you rent a car in Ireland you tell the car rental folks that you are going to be driving in the North it is two separate countries after all.

The Belfast International airport is incredibly convenient to the city of you plan to stay a few days and tour Belfast. From the centre of the city, there are many tours that incorporate the Game of Thrones doors amongst a few other iconic Northern Ireland sites.

How To Get Around Northern Ireland

Most of the tours will only stop at a few of the sites including the Giant’s Causeway which isn’t actually a GOT site but it is one of the most incredible natural sites in Northern Ireland. If you drive yourself have a read of my renting a car in Ireland article which will show you the ins and outs of getting a rental.

Visiting the Game Of Thrones doors in Northern Ireland is great craic, you get to enjoy a pint meet locals, enjoy the great scenery and see Northern Ireland at its best. The Door of tours demonstrates some incredible craftsmanship with the recycling of this ancient wood and the Journey of Doors Passport gives you a lifelong reminder of your trip.

And just to convince you to come back to Ireland here are a few more articles you can read.

Cliffs of Slieve League the magnificent sea cliffs of Donegal