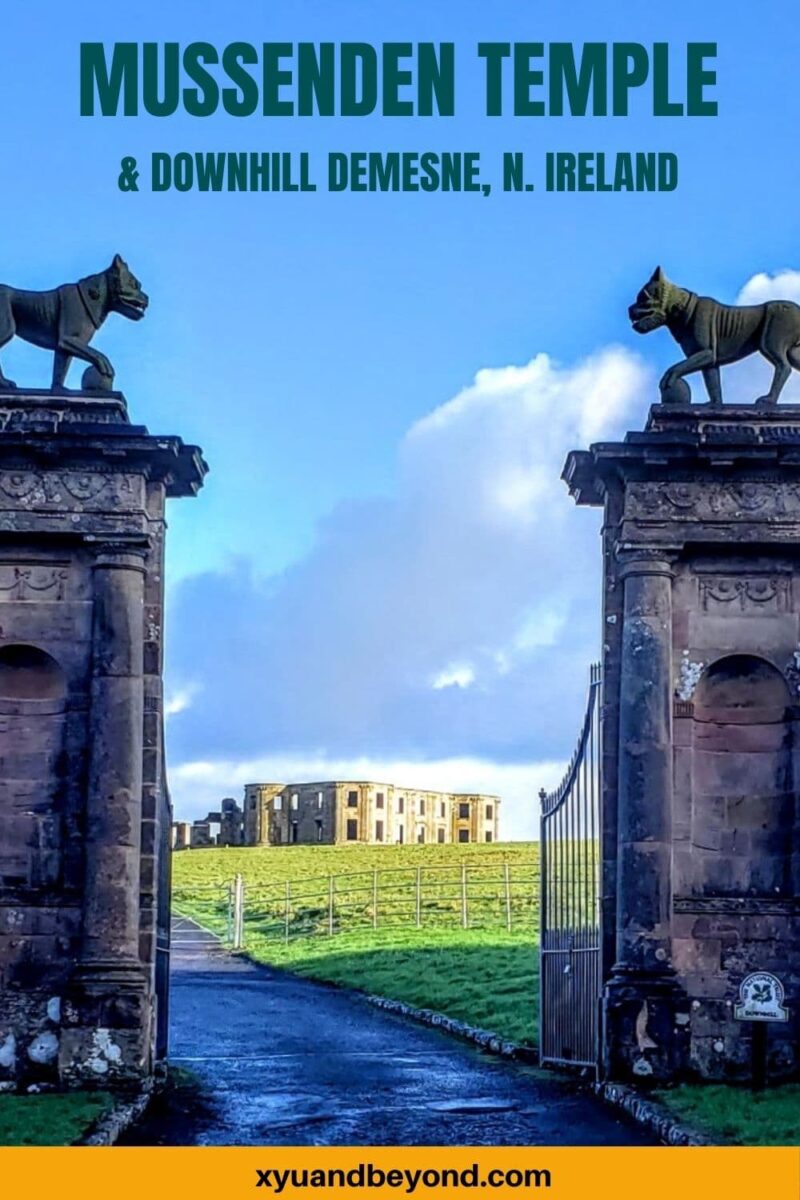 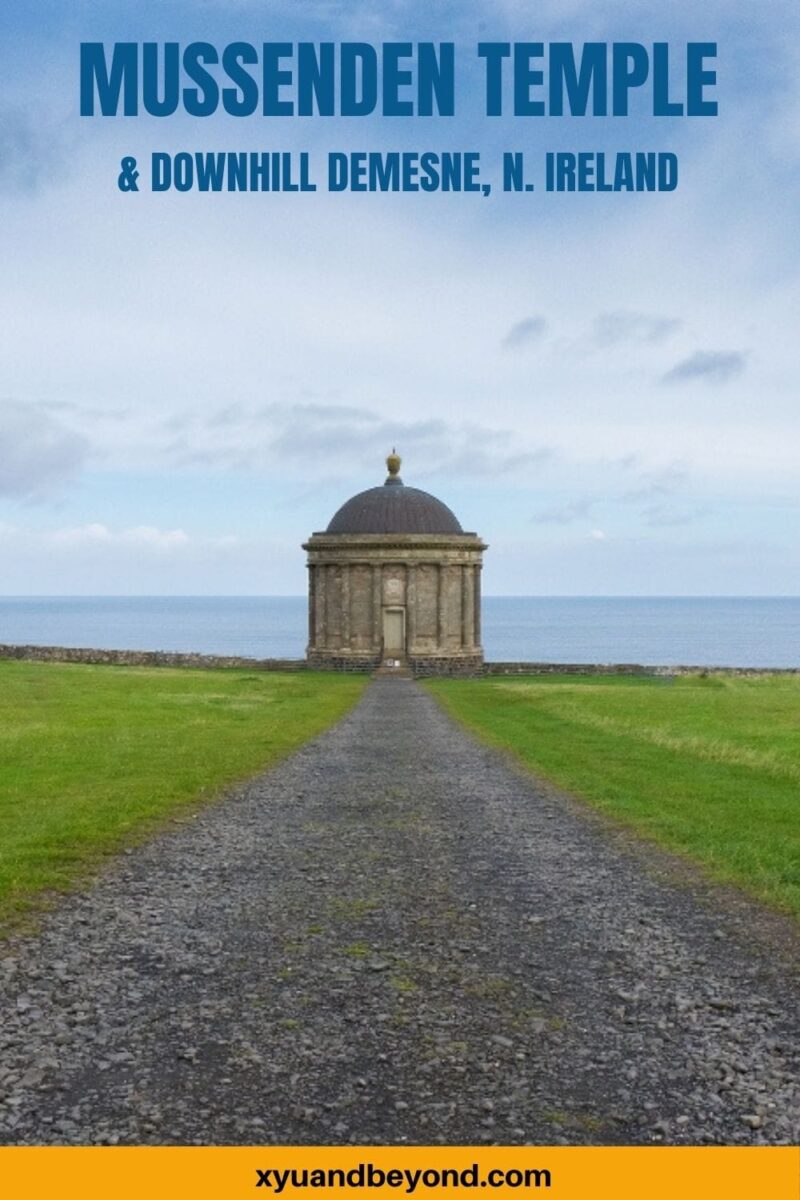 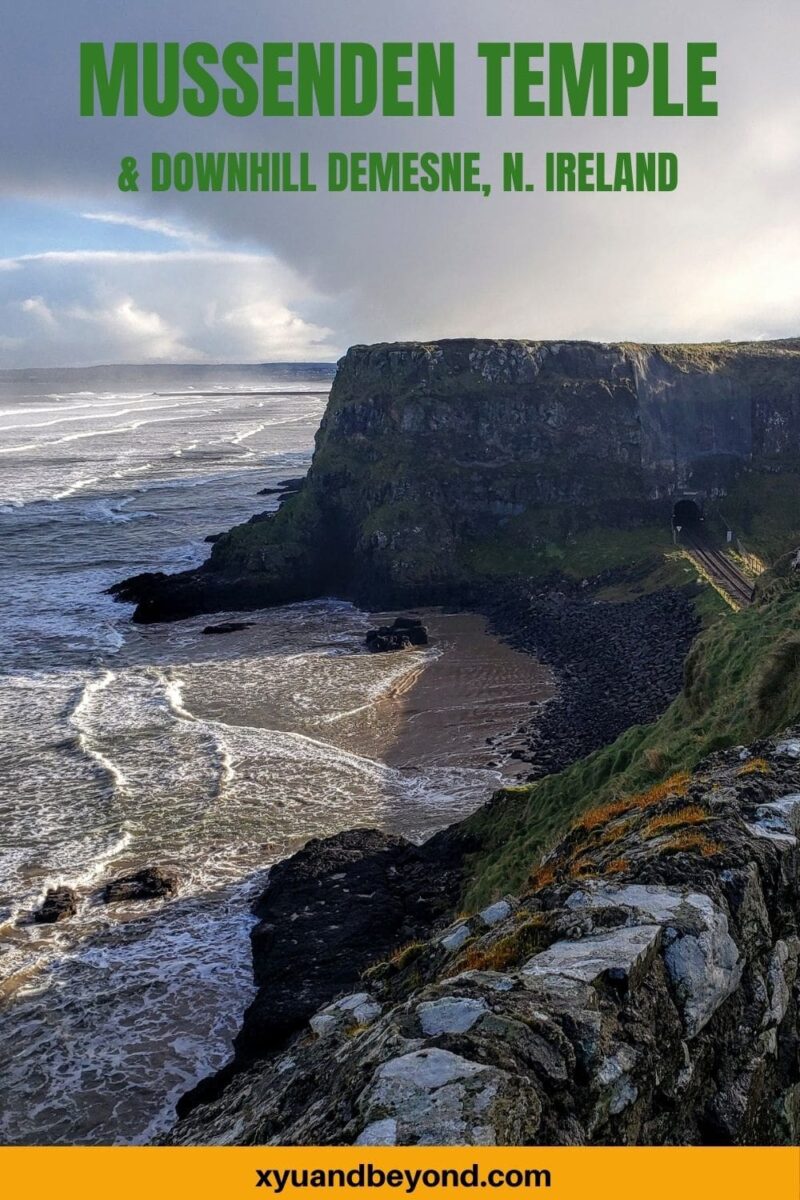 Mussenden Temple is perched precariously on the edge of a slowly dissolving cliff on the northern coast of Ireland. The Temple is located in the beautiful landscape of Downhill Demesne near Castlerock in County Londonderry.

The dramatic 120 ft cliff top that Mussenden is perched on has slowly been eroding for hundreds of years but the outstanding views from the edge offer westward views to Magilligan Point and Donegal and to the east Castlerock beach; which you might recognize from the Game of Thrones. Further on you can see Fair Head, Portrush and Portstewart.

What is a demesne?

You will often see the word ‘demesne’ used in many locations throughout both Northern Ireland and the Republic. Demesne simply means that part of the estate was surrounded by a wall and was for the use of the landowner only.

How to see Mussenden Temple for free

A simple answer to that is to walk to the Downhill Demesne. Walk NI says the following:

Take time to enjoy the spectacular panoramic views afforded by this elevated coastal location. In clear visibility, it is possible to view the following: Donegal’s Inishowen peninsula to the west; the Giants Causeway and Antrim Hills to the east, and the Paps of Jura, Scottish Isles to the northeast. Extra care should be exercised at all times on this headland due to the proximity of severe cliff edges.

How to get to Mussenden Temple

The Museum Temple, Downhill Demesne, the Mausoleum and the Belvedere can all be visited for nothing with a hike. A ticket actually includes all these plus Hezlett House.

However, if you hike across from Castle Rock, there is a free entrance parallel to the stretch of railway.

If you want to travel by rental car to the Downhill Demesne and Mussenden Temple you will find it 1 mile west of Castlerock and 5 miles west of Coleraine on the Coleraine to Downhill coast road. There is a car park that is free.

You can catch a train to Mussenden from Belfast and you get a ticket to Castlerock and from there it is a ½ mile walk to Mussenden.

You can take the Ulsterbus 234 from Coleraine to Londonderry, ask the driver to let you know when you reach the right stop. The walk to the Temple and Demense will only take around 10 minutes or so.

Mussenden Temple was completed in 1783 and over the centuries coastal erosion has caused the cliff to lose over 30 feet and by 1997 was only inches from the edge and within moments of collapsing into the sea.

World Monuments Watch provided funding to help stabilize the cliff using rock anchors, bolts, and dowels to stop erosion and secure the escarpment. Cavities and large fissures on the cliff face were filled with pigmented mortar and local basalt. In 1998, the historic temple was secured and markers were placed on the cliff face to allow for regular inspections and monitoring of the erosion.

101Landmarks in Northern Ireland to visit

History of the Downhill Demesne

Downhill Demesne estate was constructed in the late eighteenth century for Frederick Hervey, the Bishop of Derry and Earl of Bristol.

Frederick Hervey was one of Ireland’s most eccentric and genial characters. He apparently had a wicked sense of humour and some interesting eccentricities but he was committed to political, social and religious change. He promoted unemployment relief and spoke out on behalf of the Catholics and even allowed them to say mass in the Crypt of the temple.

Downhill House was beautiful in its day with feature domes and fluted Corinthian pilasters. The Lobby was massive and supported by columns of Derbyshire marble.

The Bishop loved to travel and collected many paintings and works of sculpture in his travels that were displayed in the house. He died in Italy in 1803 and the house was inherited by his relation Henry Bruce, who made the House his seat.

Sadly Downhill demesne was damaged by a fire in 1851 and left to rot. By 1950 its roof had gone and so the house became a complete ruin.

Mussenden Temple was designed as a library and built for the niece of the 4th Earl of Bristol and Bishop of Derry – Frideswide Bruce, of who was the Bishop’s “cousin”, when she was in fact his niece and the relationship was not considered “proper” and caused a scandal.

Frideswide eventually married a wealthy London banker named Daniel Mussenden and, as a wedding gift to her, the Bishop built Mussenden Temple which was to be Frideswide’s retreat.

Due to Frideswide’s ill health, probably exacerbated by the scandal, she died in 1785 and Mussenden Temple became her memorial.

The temple, inspired by the Temple of Vesta in Tivoli near Rome was built as a summer library but was heated constantly by a fire in an area below the floor; this prevented the books kept here from becoming damp from the sea air.

The Temple’s dramatic setting on the wild Causeway coastal headland provides some of Northern Ireland’s most iconic photographs.

The inscription around the building reads:

“Tis pleasant, safely to behold from shore
The troubled sailor, and hear the tempests roar.”

The grounds were laid out in the 18th century by the Earl-Bishop and are today owned by The National Trust as part of the Downhill & Mussenden Temple Estate.

Also on the Estate today is the Gateway, the ruins of the House, the gardens, the domed Mausoleum (built by the Earl-Bishop in memory of his brother), woodland and cliff walks, a fish pond, and family memorials.

The Lion’s Gate is one of the two entrances to the property. Recently restored the pillars are topped by stone snow leopards.

I must put in a word here about Al’s Coffee which you can see from the Lion’s Gate entrance. Al is a Scottish fellow selling coffee on an Irish estate and his coffee is beyond the best. It was literally the best coffee I have had in Ireland, so good I didn’t even need sugar and trust me that is saying something indeed. So pop by Al’s and grab yourself a great cup.

The Bishop’s Gate has a lovely Gothic gate lodge and is the closest entrance to the gardens and the Black Glen. Have a look at the symbolic carvings, including a bishop’s mitre and several cow skulls.

This is a small garden devoted to trees it makes a really nice walk in away from the strong winds that can blow you away on the cliff edge.

The Belvedere, also known as Lady Erne’s Seat. The summer-house of the bishop’s daughter Mary is a lovely quiet spot from which to see the sea, a fitting reward for the climb up from the Black Glen.

This garden by the Bishop’s Gate houses a great variety of flowers, including some stunning irises. The garden was first created by Lady Bruce in 1910.

Really a cenotaph – an empty tomb built as a memorial for Earl Bishop’s brother, George Hervey. Apparently somewhere on the grounds, you can spot the statue of George that was blown off in a windstorm.

The round building was an icehouse on the bottom half and a dovecote on the top. The ice used to be cut from a nearby pond and stored here.

Once a beautiful garden it provided Downhill Demesne with all it needed; fruits and vegetables for the table and flowers for decoration. The garden now has a small herd of sheep and some apple trees nothing really remains of the gardens.

Getting married at Mussenden Temple

What an absolutely unique place to get married in Ireland. Mussenden Temple and the Downhill Demesne would make a brilliant ceremony site or simply go and have your wedding photos taken there. Those are memories you will cherish forever.

Have you been to the Downhill Demesne and taken photos of Mussenden Temple I would love to see your pictures of this stunning location.