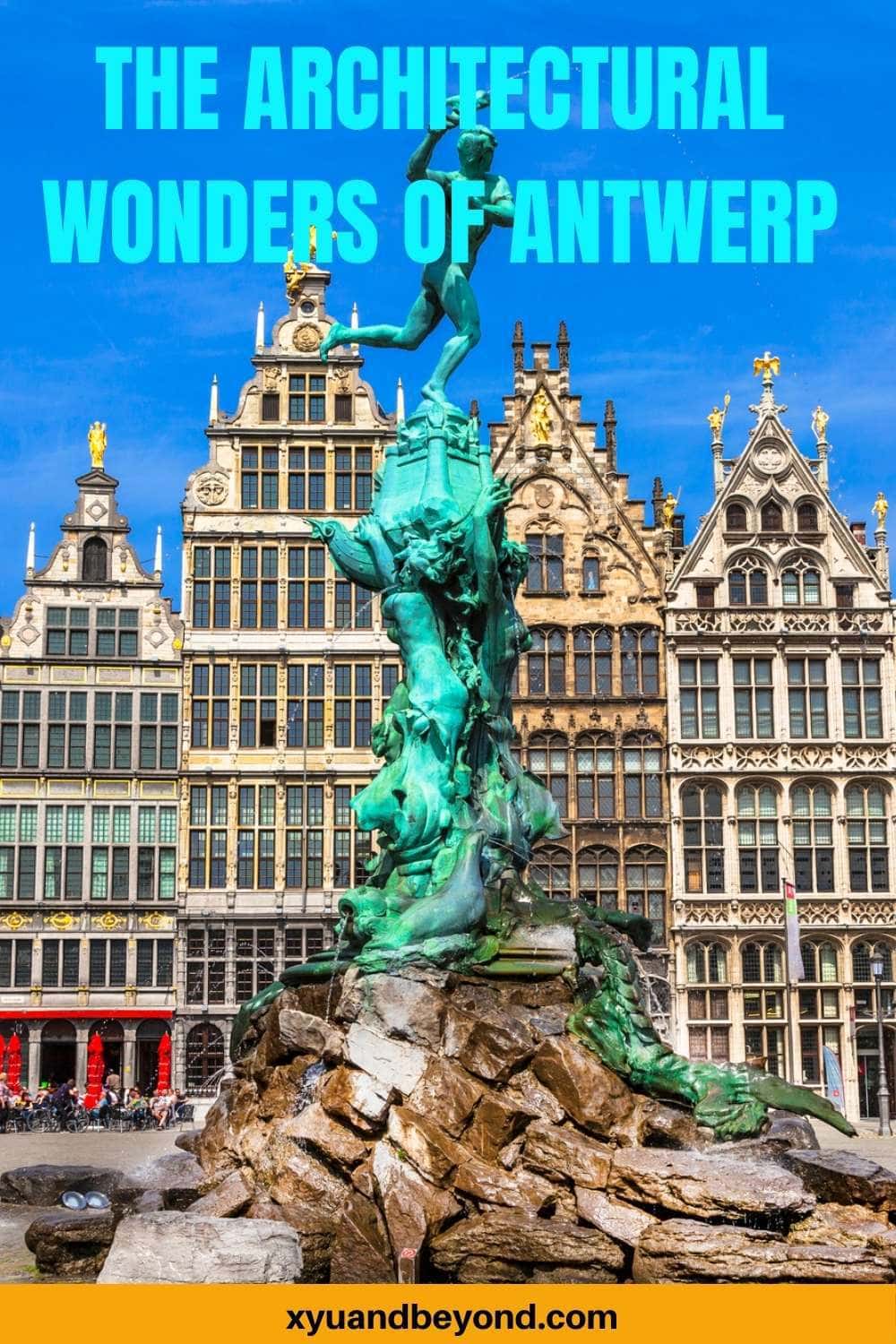 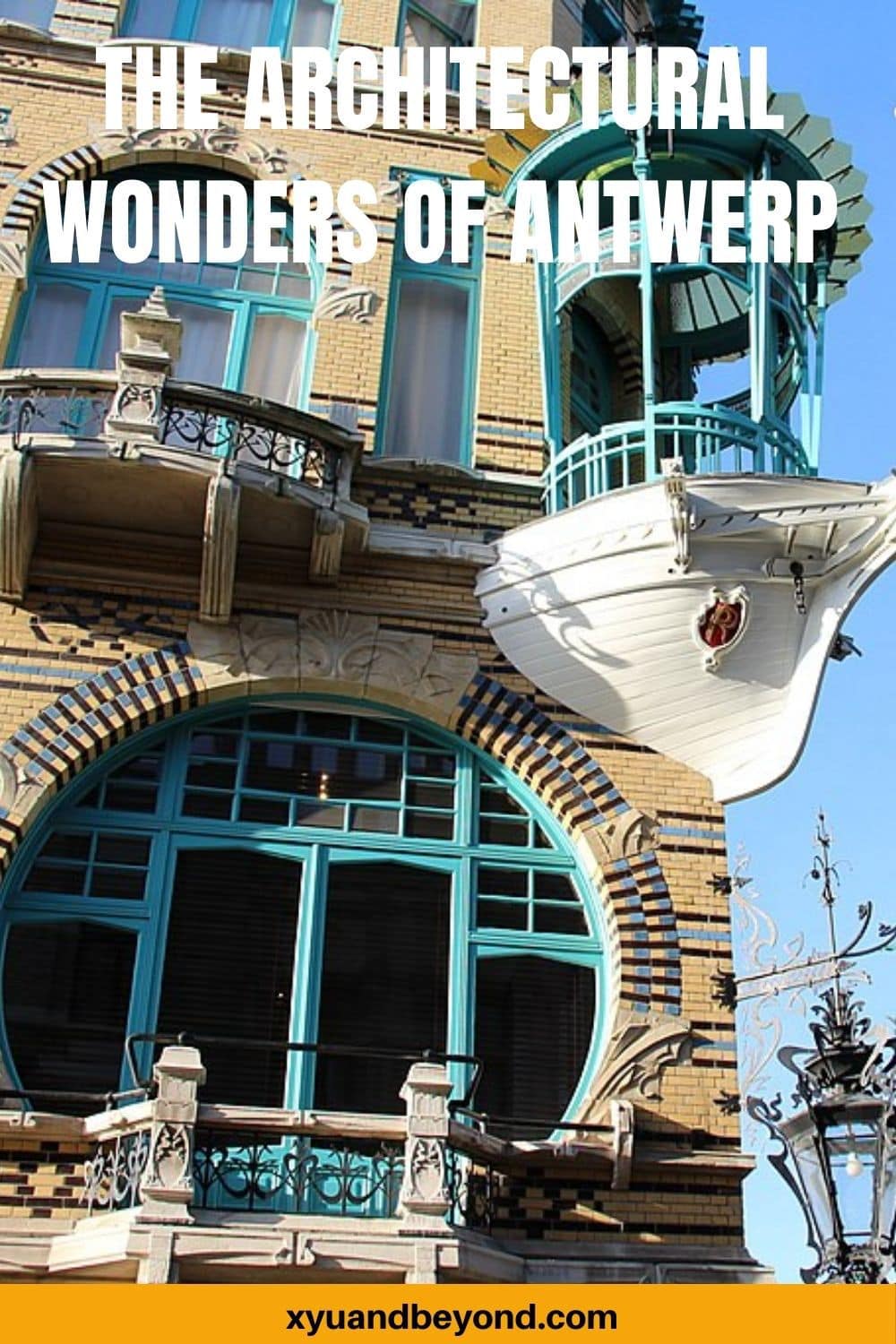 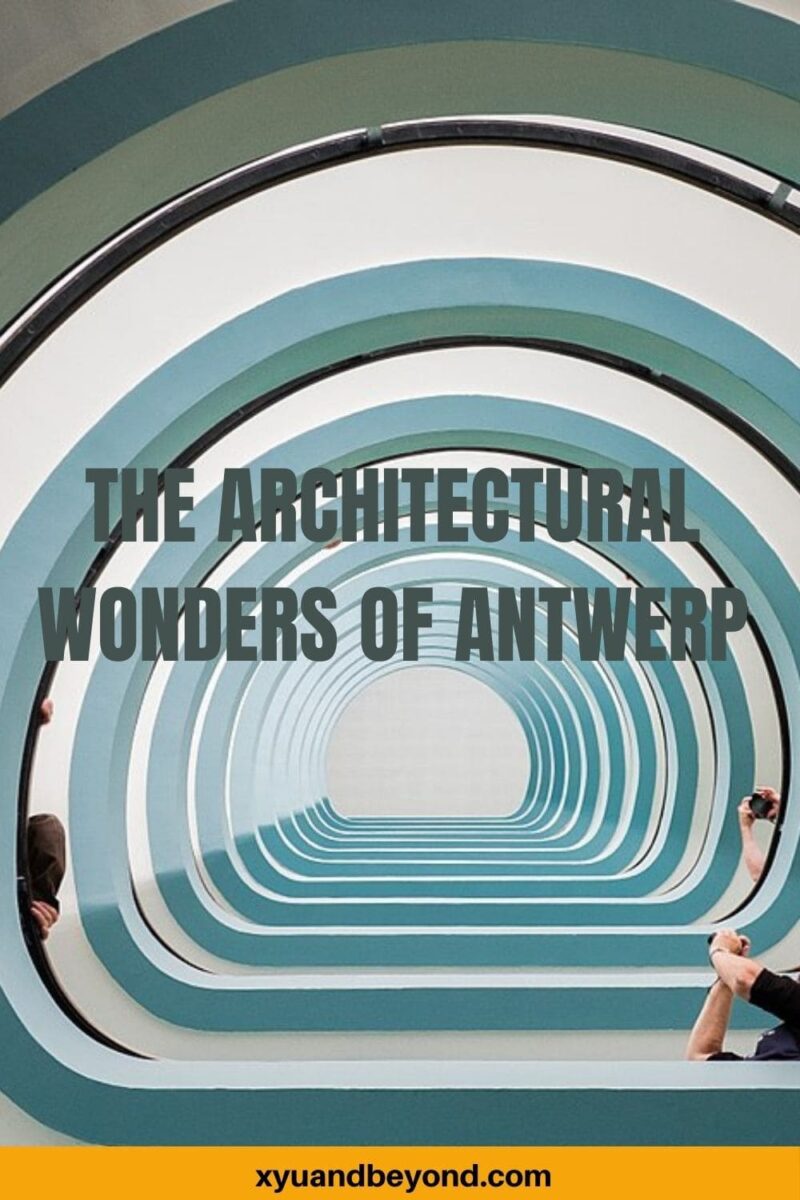 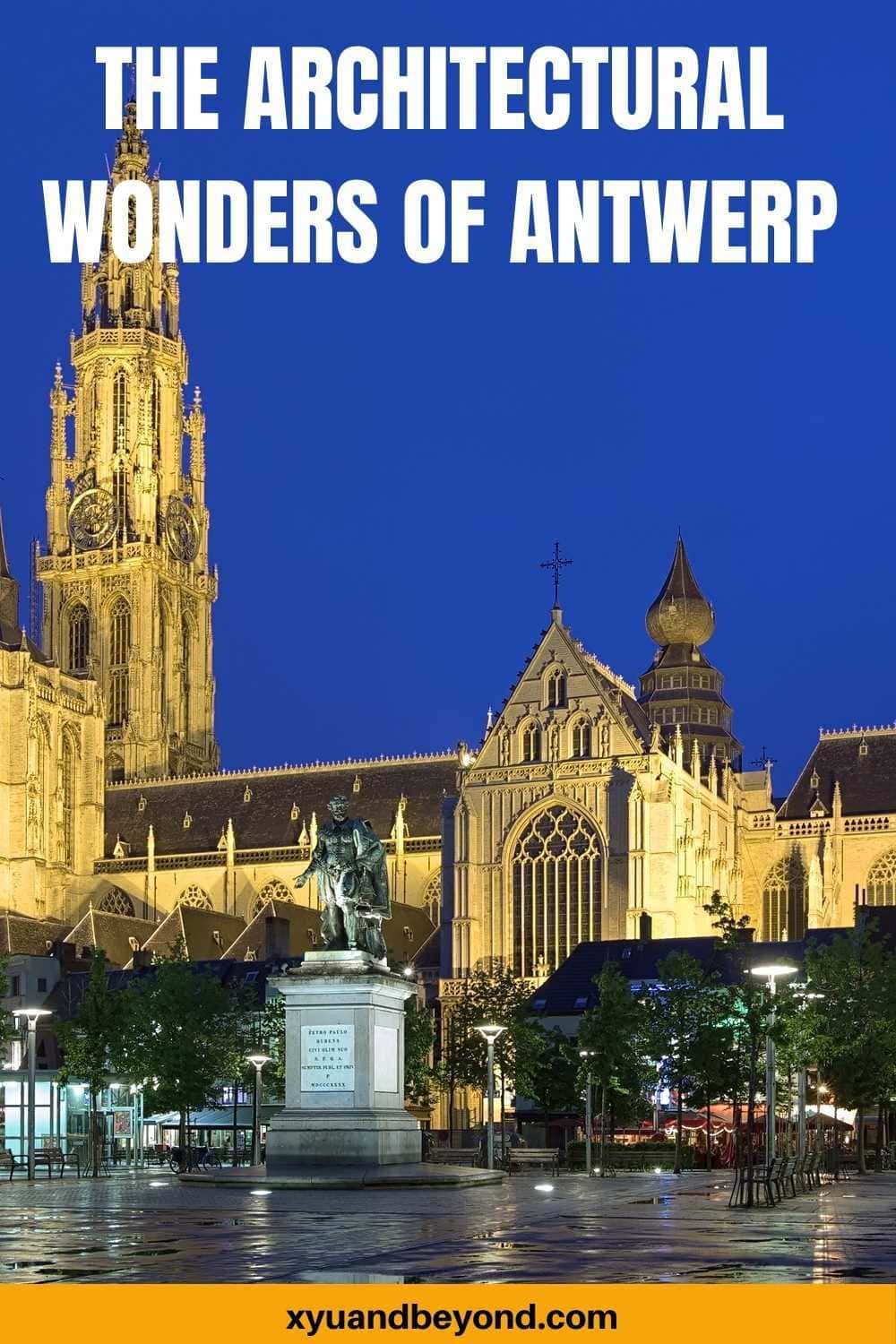 The 16 must-see architectural wonders of Antwerp

The story of Antwerp features a long history, dating beyond the middle ages. Having the second biggest port in Europe, Antwerp developed a long and important history that impacted the cultural and economic success of Belgium – resulting in some architectural treasures.

From Renaissance to Gothic and Modernism, the architectural wonders of Antwerp include architectural gems from every era, period, and style! This while the city continues to develop: in the recent years many ambitious and architectural projects like the MAS Museum, The provincial house, and the Port House have joined the landscape, leaving the Belgian city with an interesting architectural mix.

Thanks to its rich history, the significant impact on the fashion sector and it’s cozy atmosphere, the city of Antwerp has become one of Belgium’s most popular places to visit, often referred to as ‘Belgium’s capital of cool’. All this makes Antwerp a very instagrammable city, where it’s easy to create a unique photograph.

We’ve listed our favorite architectural buildings in Antwerp below, make sure to admire them in real life.

Het Steen is the oldest building in Antwerp and is located by the River Scheldt in the city centre. It was a medieval fortress, built after the Viking incursions in the early Middle Ages as the first stone fortress of Antwerp. Between 1200 and 1230 the first of three gatehouses was built and nearby you would have found a Church and a market.

Currently, the fortress is under massive reconstruction and will be closed to the public for some time.

The Brabo Fountain is a statue, tributed to the mythical soldier Silvius Brabo. Legend says there once was a giant named Druon Antigoon, who forced passing boats to pay a toll, as well as anyone crossing the nearby bridge. If the travellers refused, Antigoon would cut off one of their hands and toss it into the river.

According to the legend, Silvius Brabo sailed down the river Scheldt and came across the giant’s extortion. Brabo would refuse to pay the giant’s toll, and challenged the giant into a duel. Brabo won, chopped off the giant’s hand, and threw into the river.

Urban legend claims this is the reason why Antwerp got its name: in Dutch, it means “hand throwing”. Antwerp’s famous chocolate hands is a reference to the same story.

One of the most interesting houses in Antwerp is called “The Five Continents”. Nicknamed “‘t Bootje” (“The Little Boat”), due to the second-floor loggia in the form of a ship’s prow on the corner of the building. It is actually a complex of four houses designed for the shipbuilder P. Roeis.

The building dates back to 1901 when it was built in the Art Nouveau style by Frans Smet-Verhas. The building was commissioned by a shipowner, hence the inclusion of a wooden ship’s bow. The stained-glass windows bear the names of the different continents.

Throughout its history, the river Scheldt always had a big impact on the city Antwerp. The Schelde Vrij statue – literally translates to “Scheldt free” – is also a reference to the city’s history.

In 1585 during the Eighty Years’ War – the city of Antwerp was overpowered and occupied by the Spanish, so the Dutch blocked the passage across the river Scheldt. Even after the war, the Dutch kept charging taxes on the ships sailing to Antwerp until 1863.

This statue is designed by Jan Jacob Winders, best known for his Royal Museum of Art, and was built as a reminder of these times. That’s why Neptunus (the god of the sea), Mercury (god of trade), and a kneeling woman (representing Antwerpen) are featured on this statue.

The Bourla Theater is a prominent building in Antwerp’s art neighborhood, which was designed in a neoclassical style and finished in 1834.

Bourla Theatre (also known as Bourlaschouwburg) seats around 900. The theatre was finally finished in 1834 and opened under the name, Grand Théâtre or Théâtre Royal Français, on account of its ownership by a French company.

The Bourla is the last remaining municipal theatre in Europe with original stage machinery, which fill five levels above and below the stage. The building has been named a protected building since 1938 and is considered among the most important historic buildings in Belgium.

The provincial house of Antwerp houses the employees and the board of the province of Antwerp.

They have been housed in this 57-meter high building since 2019, which is characterized by its triangular windows.

This eye-catching building is a futuristic masterpiece that stands out amongst the other buildings in a large industrial park.

The construction of this office building allows plenty of natural light to fill its large open spaces, complete with bright interior design. All of this makes the Umicore Building a visual focal point in an area dominated by inexpressive industrial buildings, some in various states of urban decay.

The Palace of Justice Antwerp – which is also known as the Butterfly Palace – is a court located in the south of Antwerp, where the South Train Station used to be.

The building was designed by architect Richard Rogers, who also designed the Pompidou Center in Paris, and the O2 Arena in London.

Cathedral of Our Lady

The Cathedral of Our Lady is a prominent feature of Antwerp’s skyline, and one of the most beautiful places in Antwerp to visit.

The church – reportedly the largest one in the Benelux area – took over 170 years to build, and is very hard to miss; you should be able to see the Cathedral towers over Groenplaats and the nearby Grote Markt.

A note here about the Benelux Union which was a politico-economic union and formal international intergovernmental cooperation of three neighbouring states: Belgium, the Netherlands, and Luxembourg. The name Benelux was formed by joining the first few letters of each country’s name — Belgium, Netherlands, Luxembourg—and was first used in 1944.

The Cathedral was started in 1352 and the first stages of construction finished in 1521 but has never been completed. It is a Gothic style cathedral and it contains several immensely valuable works of art from Peter Paul Reubens amongst its treasures. There is also a statue to Reubens outside the Cathedral.

The belfry of the cathedral is included in the Belfries of Belgium and France entry in the list of UNESCO World Heritage Sites.

Antwerp’s Farmer’s Tower (“Boerentoren”) is a historic building in the Art-deco style, constructed between 1929 and 1932.

It’s the second tallest structure of any kind in the city (after the gothic Cathedral of Our Lady), and at the time of construction, it was one of Europe’s very first skyscrapers.

The building – named after the Belgian Farmers’ Union – is a protected monument since 1981.

The Hendrik Conscience Heritage Library is the repository library of the city of Antwerp.

The library was named after the Flemish writer Hendrik Conscience, whose statue is located in the library as well.

Felix Pakhuis is a nineteenth-century large warehouse and one of the most important examples of the era. Today it is a protected monument and part of a protected cityscape.

In 1860 the warehouse was opened and used to store goods such as grain, cheese and coffee. In 1862 it burned down and was immediately rebuilt using materials recovered from the fire. It was however built with 6 floors instead of the original 7 and included a new wide corridor that divides the building and is covered with a glass roof.

Parkbrug is a bridge for pedestrians and cyclists that connects Park Spoor Noord with Eilandje, two areas in the north of Antwerp which were disconnected from each other. The bridge is an outstanding gateway to the north of the city.

Antwerp Central Railway Station is the city’s main railway station, which was built between 1895 and 1905 but suffered huge destruction during World War II. The destruction was so bad that the city even considered demolishing it for safety reasons. Luckily the renovation started a little later, making it the most beautiful railway station in the world (according to Mashable magazine).

The building has an eclectic style; some describe it as Neo-Renaissance architecture, mixed with some Art Nouveau decorative motifs and ornaments.

Antwerp Central Railway Station is one of Belgium’s busiest train stations, next to the ones in Ghent and Brussels.

Antwerp’s latest architectural jewel is the Port House: this funky and innovative building is the headquarters of the Antwerp Port Authority.

Designed by Iraqi-British architect Zaha Hadid, the building opened in 2016, the year of her death. It is the sole government building designed by Hadid. The design of the building incorporates the use of a fire station, integrating it into the building.

The National Bell Telephone Company built its first foreign office back in 1882, which resulted in “Den Bell”.

This historical building now serves as an administrative building for the city of Antwerp but is most known for its ‘instagrammable’ staircases.

Have you visited Antwerp? Which one was your favourite building?