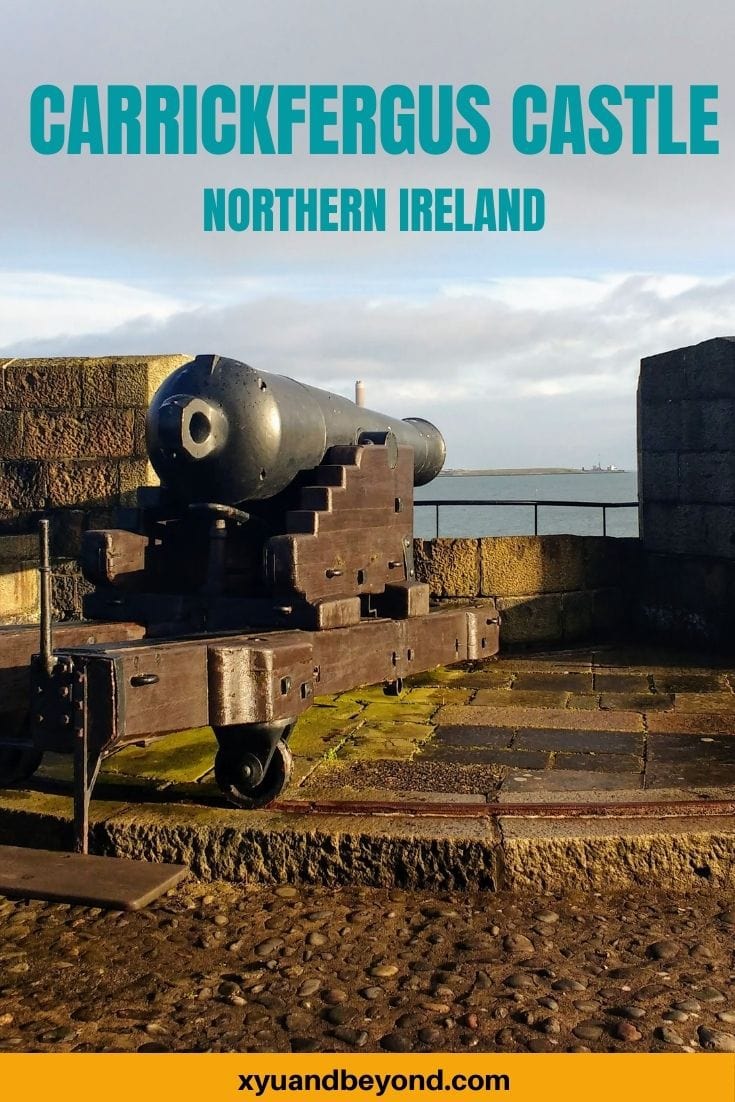 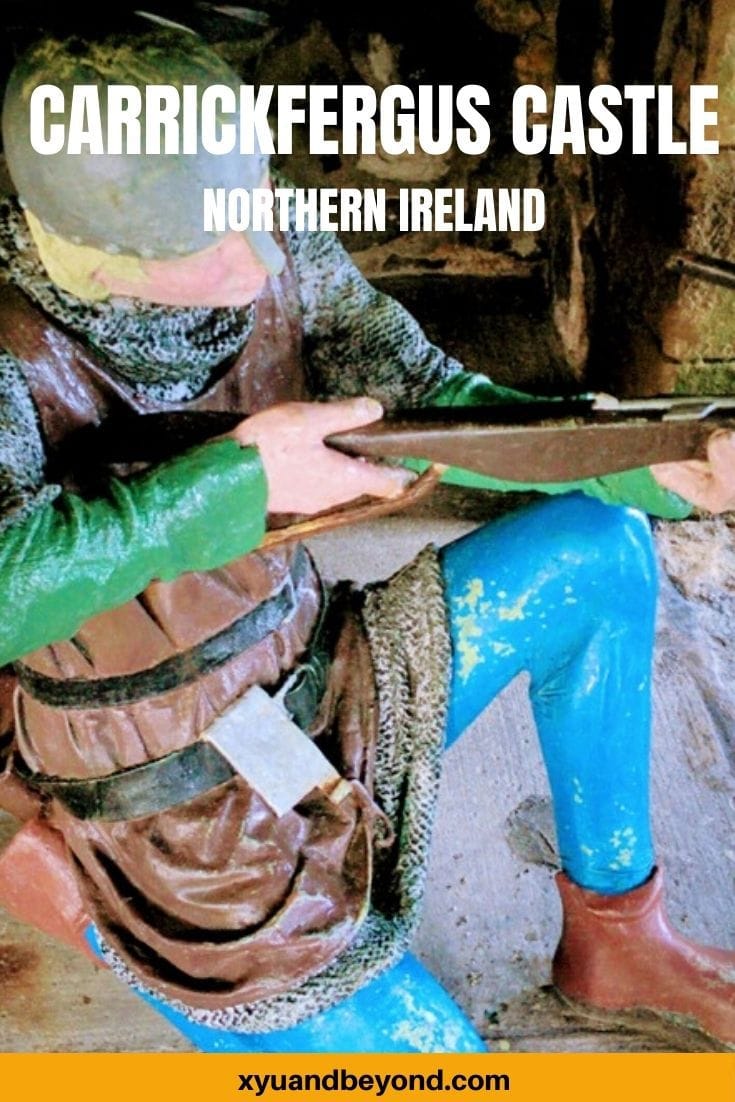 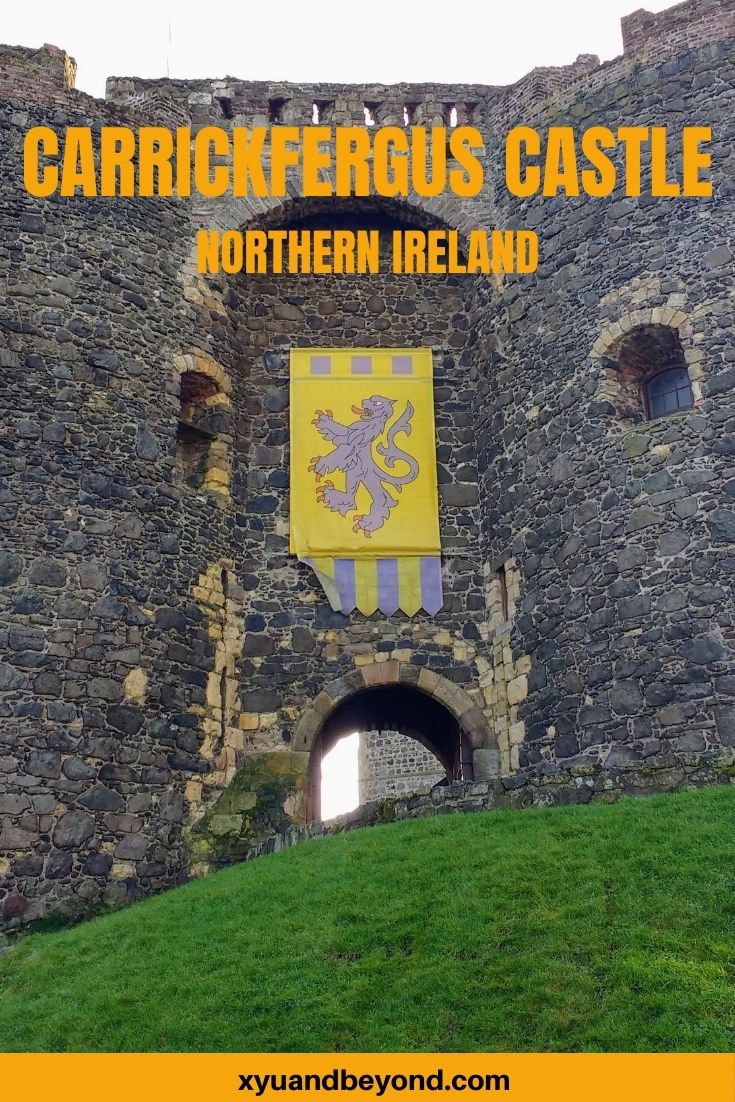 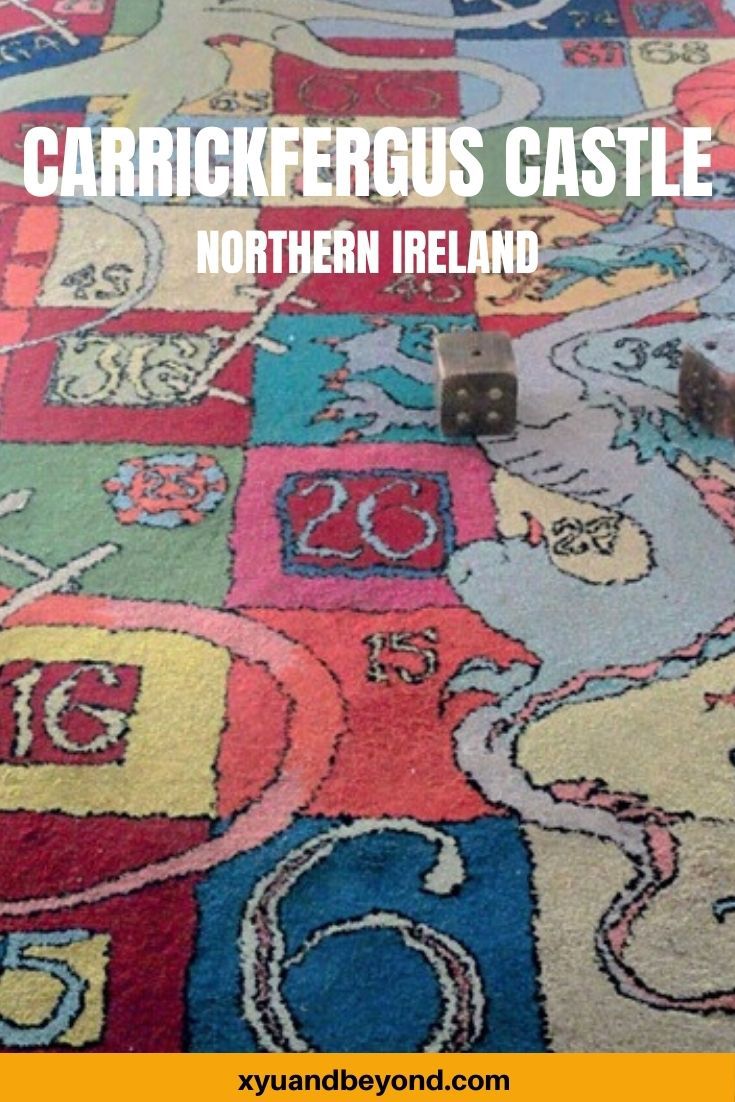 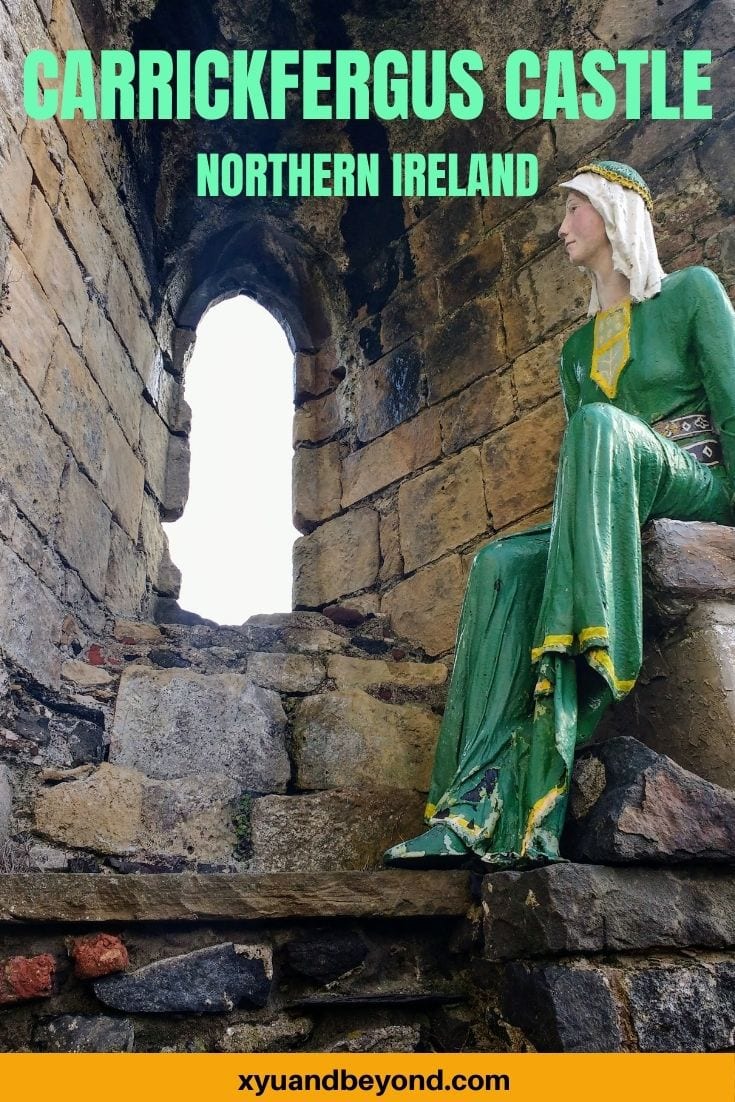 Carrickfergus Castle is an 800-year-old Norman Castle that sits on the north shore of the great sheltered harbour Belfast Lough in Carrickfergus County Antrim Northern Ireland.  The Castle is now home to a newly refurbished Visitors Centre, ancient cannons and fascinating historical displays.

Besieged in turn by the Scots, Irish, English and French, the Carrickfergus castle played an important military role until 1928 and remains one of the best-preserved medieval structures in Ireland.

The Castle is extremely well-preserved and considered one of the finest examples of medieval castles in Ireland. It has the remains of its original curtain wall with a tower on the east side and a postern gate on the seaward side.

Historians believe that the east Tower was the location of the Chapel and it has a chamber on the first floor with crossbow loops found on the basement levels and a Romanesque double window.

On the grounds, there are displays of canons dating from the 17th to 19th centuries and exhibits throughout the grounds of the castle.

The Castle also hosts civil weddings and you can hire the castle for private parties in the dungeons and other events.

Carrickfergus Castle comes from the Irish Carraig Ḟergus or “cairn of Fergus”, the name “Fergus” meaning “strong man”.  Today it is maintained by the Northern Ireland Environment Agency as a state historic monument

When is Carrickfergus Castle open?

The Castle is open to the public daily all year round but the hours do vary a little. Entry costs are £5.50 for Adults.

Was Carrickfergus Castle used in Game of Thrones?

No, the Castle wasn’t used in the Game of Thrones TV Series, but it makes a great start to a Causeway Coast Tour and it truly is a beautiful location to begin your site seeing tour of Northern Ireland.

How to get to Carrickfergus Castle from Belfast

Car – Carrickfergus is about 11 miles or 17km from Belfast and an easy drive if you have rented a car.

Train – You can get a train from Belfast Central (which is not in the city centre but on the edge of it) or Great Victoria Street (which is in the city centre) train stations to Carrickfergus, the train line you will travel on will be the Larne line.

Bus – A bus leaves from the Duncairn Yorkgate Station around every half an hour to Carrickfergus Joymount station the journey takes around 40 minutes.

When was Carrickfergus Castle built?

The Castle was built by John de Courcy in 1177 and used as his headquarters until around 1204 when Courcy lost the castle to Hugh de Lacy. The original castle included a bailey, with an inner wall and a great hall with a curtain wall built around the exterior to protect the castle from the sea.

Affreca is noted for religious patronage in northern Ireland and founded Grey Abbey, on the Ards peninsula. A statue of her sits on a high wall in Carrickfergus with a plaque that says “thinking of home”.

John de Courcy managed to build the castle and rule the area because Richard the Lionheart simply didn’t give a toss about Ireland in fact he barely cared about being King of England either.

When Richard died in 1199 his brother John became King of England and he did care about Ireland and felt that John de Courcy had usurped and set up his own kingdom.  John commissioned Hugh de Lacy a Norman Lord living south of Dublin to bring de Courcy to heel.

John de Courcy came under attack by King John’s soldiers led by Hugh de Lacy and lost the castle. In 1210 and in 2017 de Lacy added a larger castle curtain wall to protect the eastern side and a massive portcullis at the gatehouse and a vault all of which were finished in 1250.

John de Courcy later tried to reclaim the Castle but was unsuccessful and was sentenced to life in prison. King John later released him to go on a pilgrimage to the Holy Land.  The King also ordered de Lacy to hand the castle over to the crown which he refused to do.

King John then laid siege to the Castle and eventually de Lacy surrendered it to the crown where for the next 700 years Carrickfergus would remain a military installation.

One of the most notorious men in Ireland was Arthur Chichester who was appointed Governor of Carrickfergus on the death of his brother, John in 1598 who was killed at the Battle of Carrickfergus. The stories say that John was decapitated and his head used as a football by James Sorley boy MacDonnell who commanded the opposing forces at the battle. Sorley Boy was poisoned at Dunluce Castle later on the orders of Robert Cecil, Privy Council to Queen Elizabeth II) to placate Chichester.

Chichester was a much-hated man due to his persecution of Catholics in Ireland and his belief that they were a threat to the Crown. A major figure in the Plantation of Ulster after the Flight of the Earls in Donegal he was responsible for all the native lords of Ireland loss of lands.

Over the years the Castle was attacked and taken many times. In 1690 it was taken in the name of King William III and in 1760 by Francois Thurot took the Castle for the French.

Thurot was a privateer (pirate) and he preyed on British ships he spent a year in an English prison before being released at which time he became a captain of his own vessel. Thurot’s grandfather was Irish and he held Irish sympathies and spent years smuggling between Ireland and England. When his ship was seized by the British and impounded the British refused to give it back to him. Thurot went to the French navy and obtained a ship and led a squadron of ships that harried the British from 1756 to 1760.

In 1760 he landed at Carrickfergus, capturing the castle in what became known as the second Battle of Carrickfergus and commandeering supplies from the local people. He was not the last pirate to menace the castle, however. In 1776 during the revolutionary war in America, the American privateer John Paul Jones was leading lighting raids on the British coastline. One of his targets was moored at Carrickfergus – the HMS Drake.

Jones attacked at night but the sailor who dropped the anchor was drunk and got the timing wrong. Fleeing the coast the Drake pursued and attacked Jones. Jones won the find and captured the ship. Over time Jones captured 11 British ships, 8 of which he sent back to Boston to be sold for a total of over a million dollars to help fund the war.

The Ghost of Carrickfergus

One of the most prominent legends about ghosts in Castles in Ireland is that of  ‘Button Cap’, a young soldier who was stationed at Carrickfergus during the late 18th century.

The legend of Button Cap is that of mistaken identity. Robert Rainey, a fellow soldier found out that his fiancee had been cheating on him with a man named Jennings, who was attacked and killed by Rainey. But it turns out that he had mistaken Jennings for a man called Timothy Lavery. He attacked the man in the night and dealt him a fatal blow before fleeing. Jennings lived long enough to tell the story and he swore to haunt the castle forever.

During the Napoleonic Wars, the castle was used as a prison and in WWI and WWII the castle was an air raid shelter and garrison. In 1928 ownership was given to the State who declared it a National Monument and opened it to the public.

The keep stands 40 metres high and the walls are 4 metres thick. On the ground floor, there are no windows and this area was used mainly for water and food stores. The second floor was one large room with a massive fireplace where the lord of the Castle would hold court. The top floor of the Keep was for the lord and lady’s private accommodation.

The middle ward of Carrickfergus Castle with its square tower was built in 1215. As the castle grew so did the buildings that surrounded it that were used to house the servants and soldiers. The Outer Ward was built in 1230 and the massive castle was finished with a stone gatehouse. The gatehouse has a portcullis and a drawbridge over a moat.

You’re able to walk up the steps and see a fantastic view all the way around the castle, as well as go inside the castle and learn about a number of different rooms. One room has a giant chess set and the room at the top of the castle has a large snakes and ladders carpet.

The Keep or Great Tower restoration project began in 2020 and replaced the flat roof put on the building in the 1930s with a traditional one from the correct era. Some of the findings during the restoration included: stonemason marks from the French masons who trained the local craftsmen, seven square holes were revealed and it is believed that the holes were for support beams for a timber walkway.

Carrickfergus Castle is a self-guiding facility. Information boards around the Castle allow you to explore this historic monument at your leisure whilst getting an insight into the history of the site. You can also purchase an information booklet with a map from the Visitor Centre, which is located at the entrance to the Castle.

Have you been to Carrickfergus Castle yet?