The Spectacular Mosaics of Paphos

Visiting the Paphos Archaeological Park in Cyprus allows you to step back in time to the 4th century. The Paphos Mosaics are considered among the finest in the eastern Mediterranean and form part of the Archaeological Park of Kato Pafos, which has been included in the UNESCO World Heritage Sites list since 1980.

The Mosaics of Paphos were discovered in 1962 after a farmer ploughing his field accidentally unearthed one of them.

Located just south of Turkey and west of Lebanon Cyprus sits in the glorious turquoise Mediterranean Sea. This region has been a historic and cultural crossroads for over two millennia and Cyprus at the southwest of the island has played a role in the ancient history of Persia, Greece, the Roman Empire, early Christianity, and much more.

Within the Paphos Archaeological Park are the rare and dazzling mosaic pavements that decorate many of the buildings at the site. 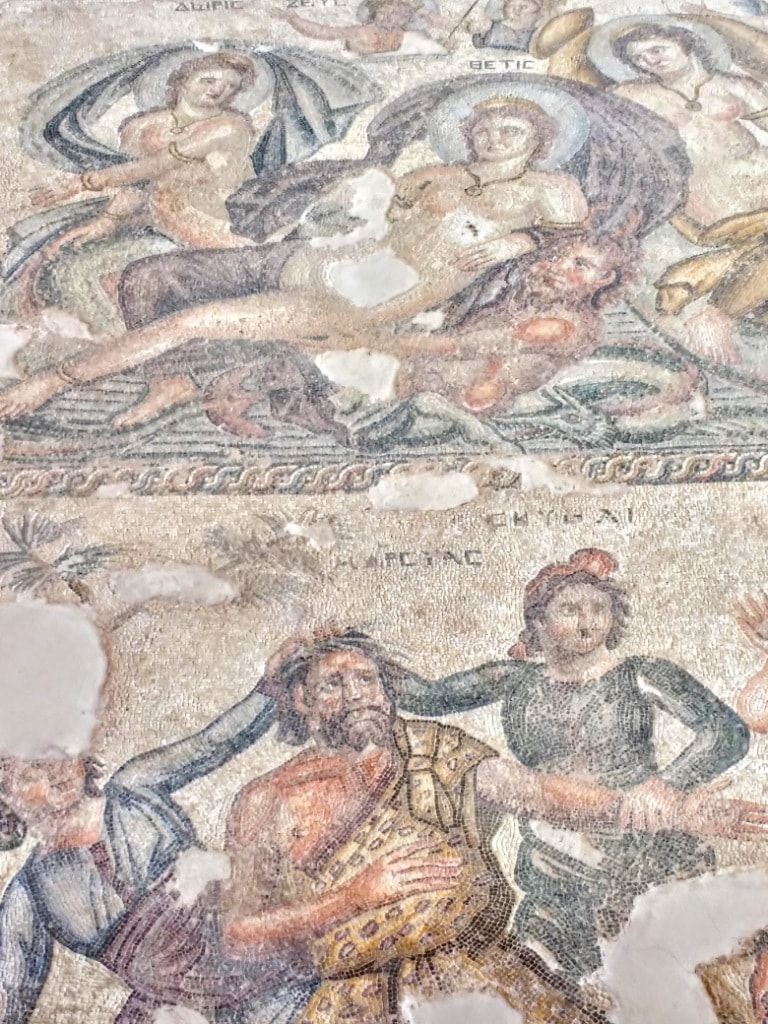 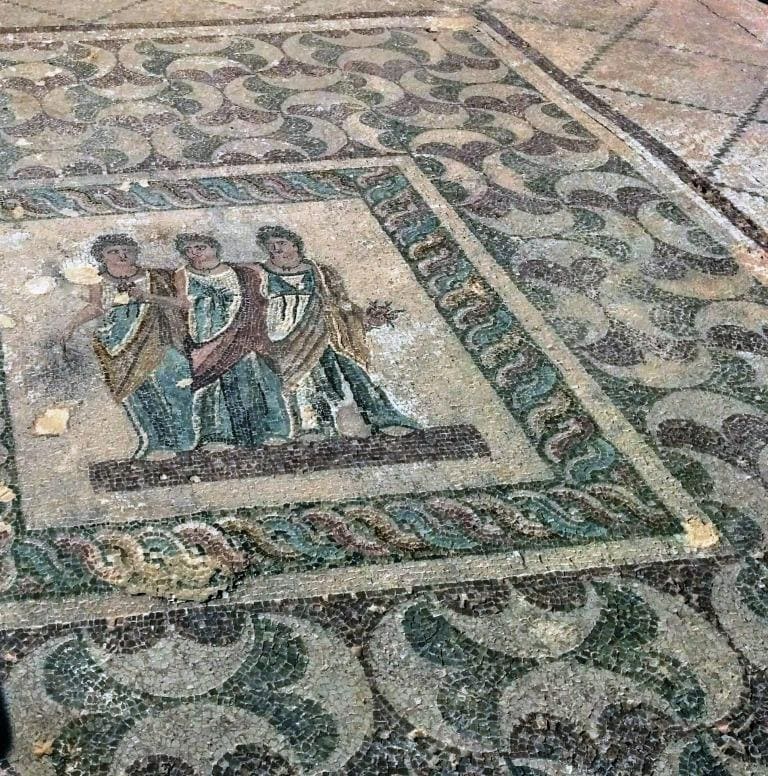 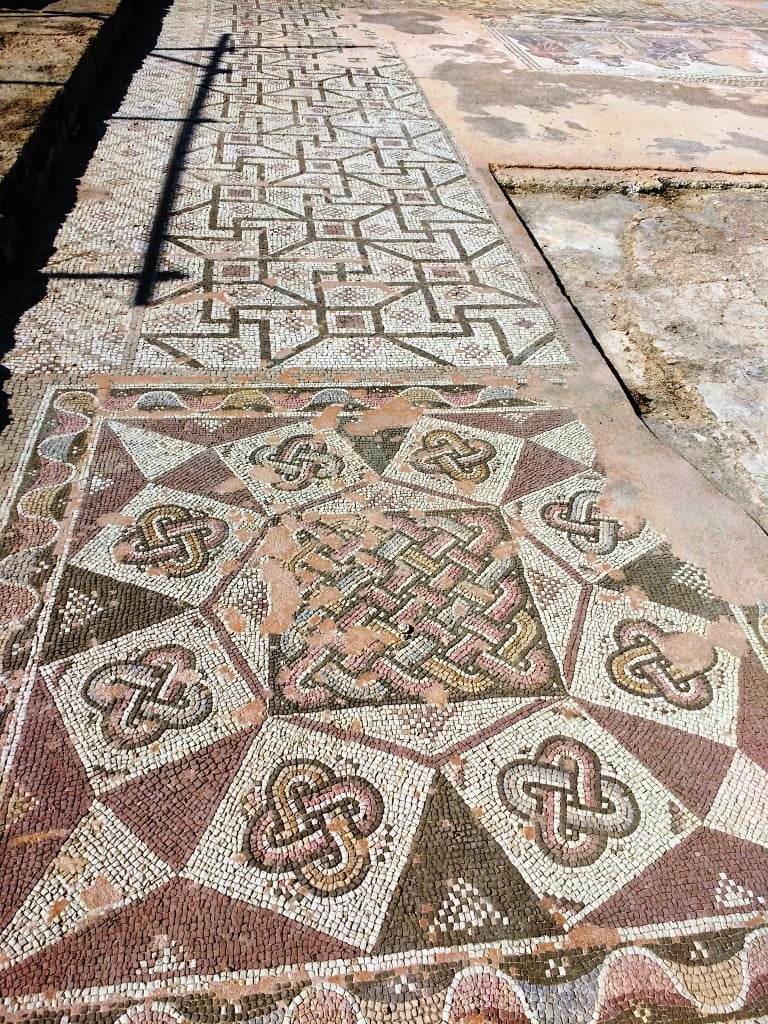 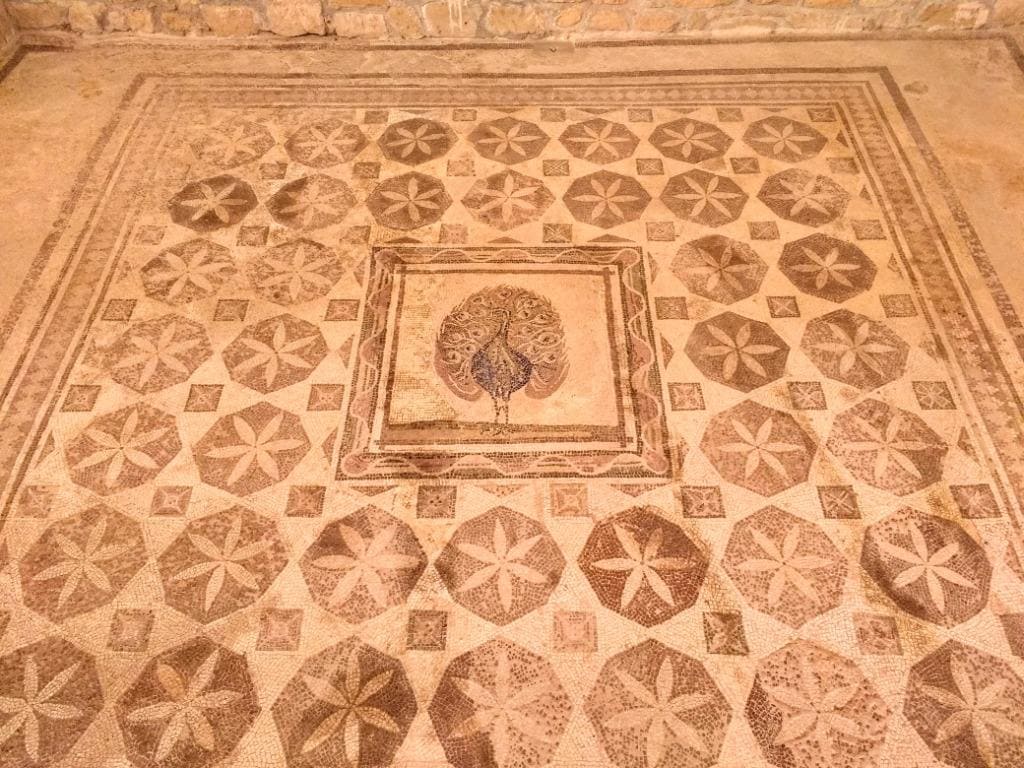 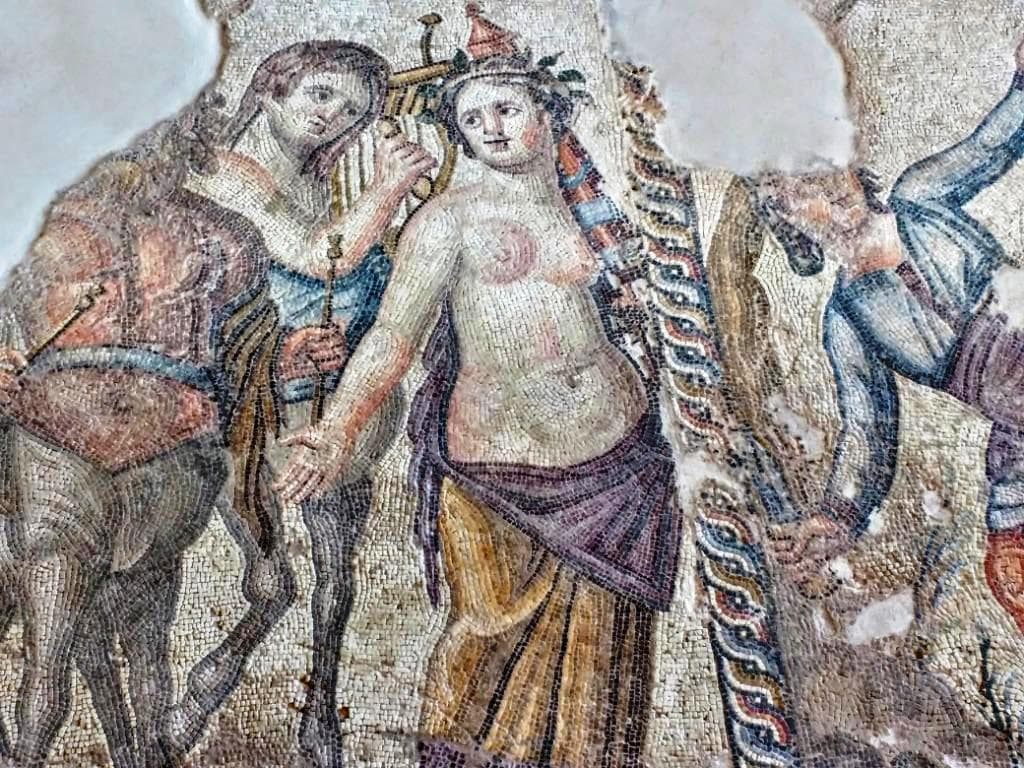 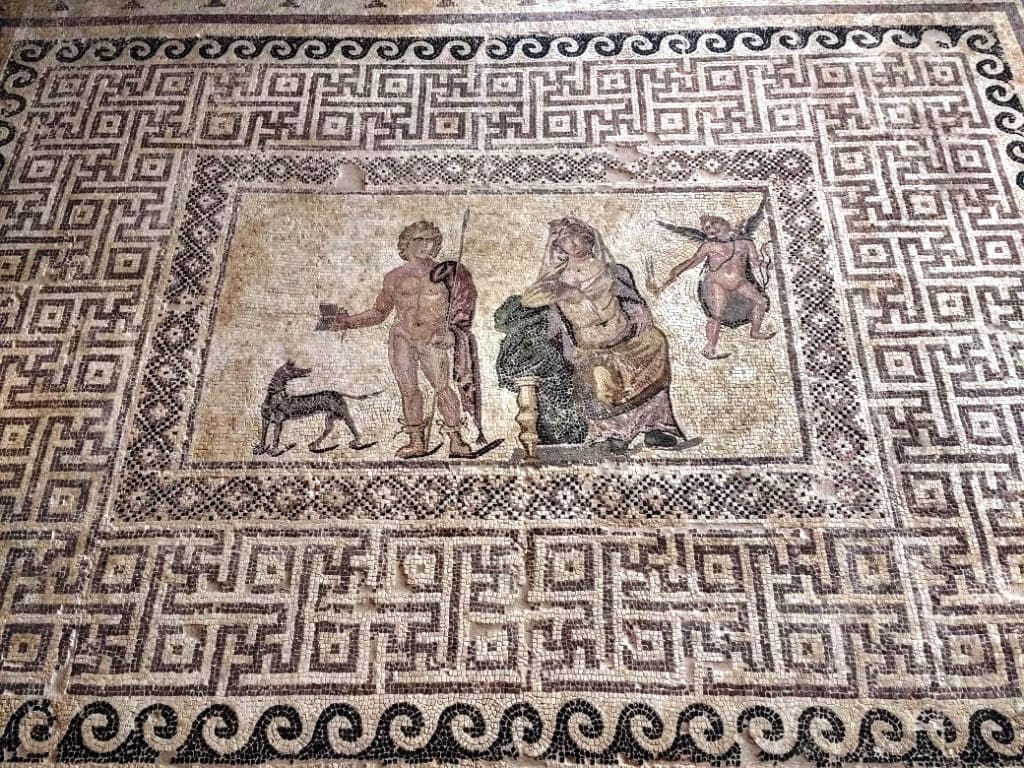 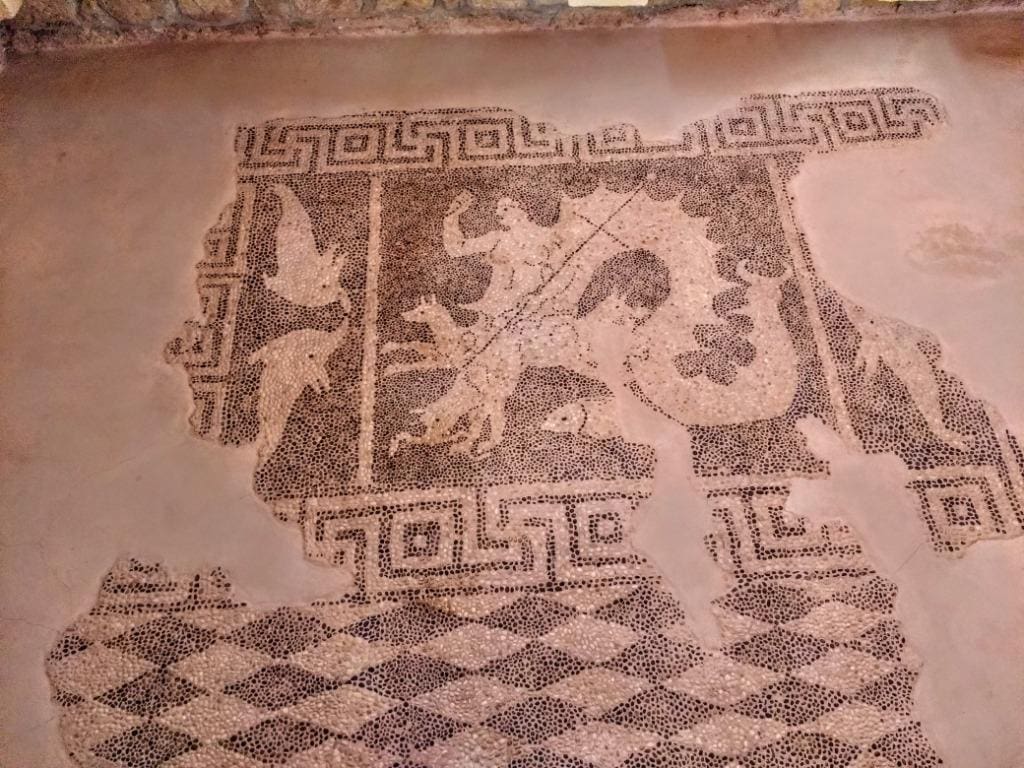 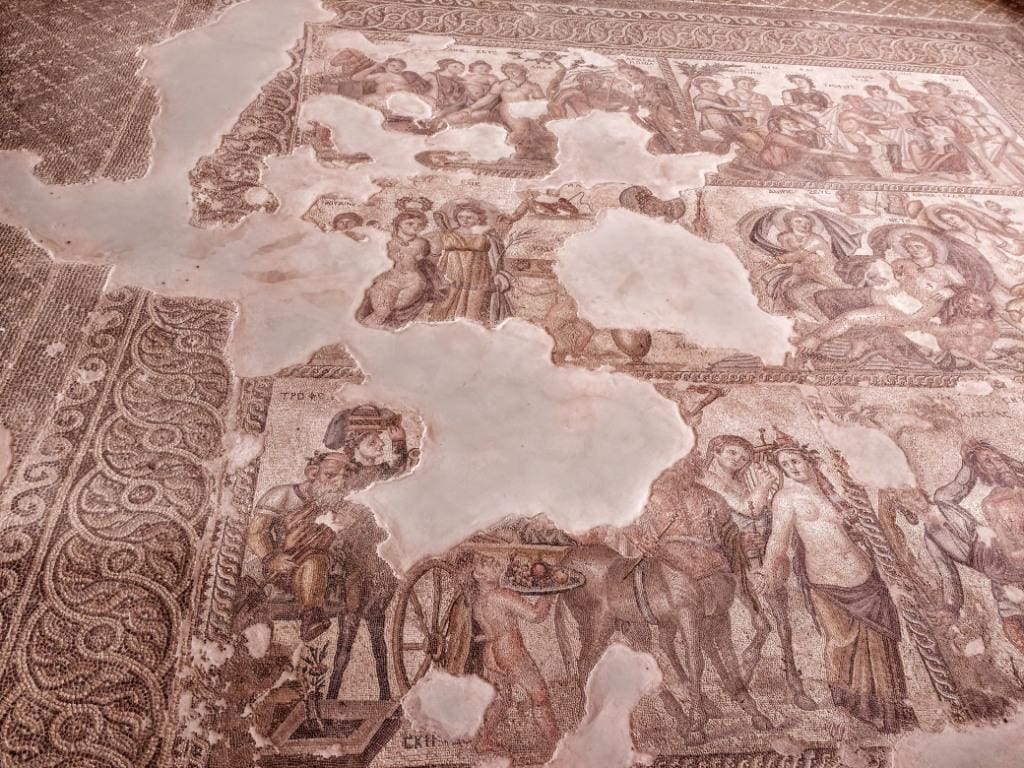 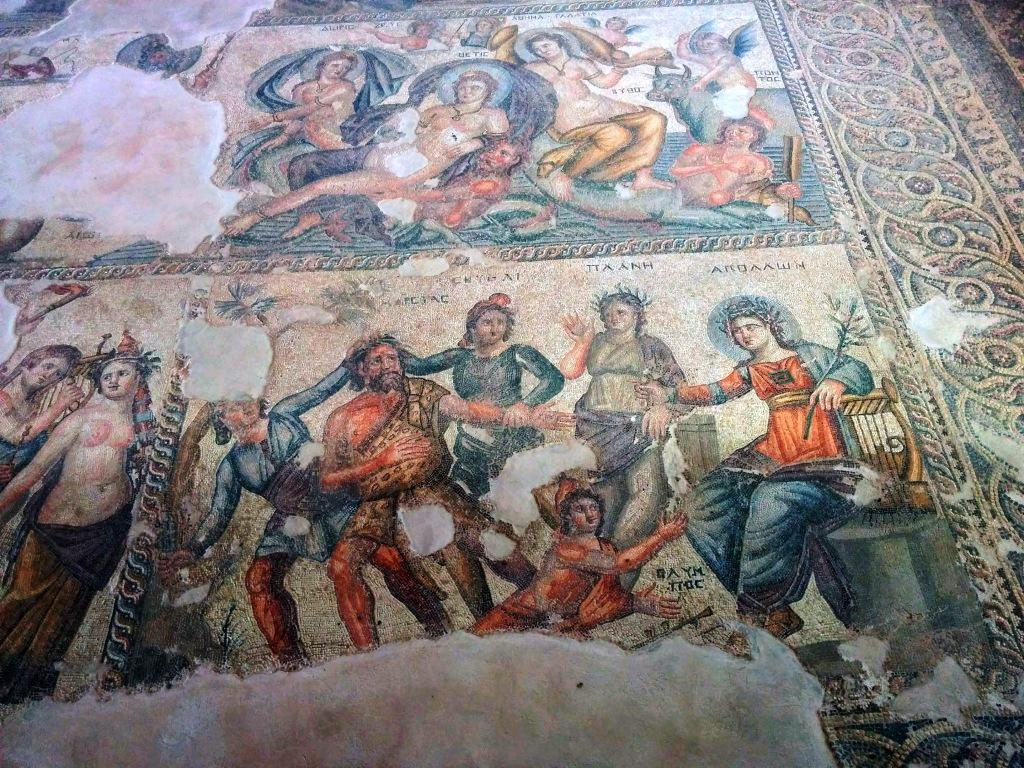 For just €4.50, you can explore these incredible mosaics and monuments dating to the prehistoric and medieval periods. For €8.50 you can get a day pass which allows you to visit all the ancient antiquities sites and museums in Paphos.

What is Nea Paphos?

Nea Paphos is one of the three components forming the Paphos archaeological complex inscribed on the UNESCO World Heritage List in 1980 for its outstanding mosaics and ancient remains, as well as its historical religious importance.

The Mosaics of Paphos

The House of Theseus

You will find the Roman Mosaics within the Paphos Archaeological Park, by the Kato Paphos harbour close to the ancient fort. The first area you come across is called the House of Theseus. This villa is obviously named after Theseus, who can be seen represented within some of the mosaics.

Surrounding the villa are a series of boardwalks from where you can see the various mosaics and information panels.

The House of Theseus was built during the second half of the 2nd century over some earlier ruins dating back to the early Roman and Hellenistic periods. The three centuries of Greek history between the death of Alexander the Great in 323 B.C.E. and the rise of Augustus in Rome in 31 B.C.E. are collectively known as the Hellenistic period.

The floorplan of the House of Theseus is incredibly large and probably would have had over 100 rooms. The great size indicates that it probably was the home of the Governor of Cyprus. The building itself has a central courtyard with columns and four wings.

The largest floor mosaic is that of Theseus and the Minotaur which dates back to the 3rd century.

One of the mosaics depicts ‘The First Bath of Achilles’, which dates from the 5th century. The baby Achilles is seen with his parents, the 3 fates and his nurse.

The House of Aion was excavated in 1983 and covered to protect its stunning mosaics. The house takes the name of the God Aion due to the very faded mosaic depicting God. Only three rooms had been successfully excavated from this ancient Roman villa. The mosaic floor on this villa is where you will find the most exceptional works of Roman art during ancient times. It is also one that is highly discussed by scholars. The wall of this villa had collapsed and was restored.

The House of Aion dates back to the 4th century and contains some incredibly detailed and intricate mosaics. Within the House, you will see mosaics of Apollo, Cassiopeia, Dionysos and Hermes. The central panel is divided into 5 smaller panels depicting different mythological scenes. These include Leda and the Swan, the beauty contest between Cassiopeia and the Nereids, and in the centre a portrait of the God Aion whose name means time.

The House of Orpheus

Orpheus was a God famed for his skill in music and his playing of the lyre. The House of Orpheus dates back to the end of the 2nd and early 3rd centuries AD and probably belonged to a Roman General.

The house is organized around a peristyle atrium which is a typical roman style home with a central courtyard that was open to the sky and contained beautiful gardens. There would be a shaded portico embellished with elaborate wall paintings and the floors often had impressive mosaics depicting mythological scenes.

The House of Orpheus has a large mosaic that represents Orpheus playing his lyre while surrounded by wild beasts.

Another famous mosaic within the house depicts the battle of Hercules wrestling with the Nemea Lion.

There are also hunting scenes which may indicate that this area was a banquet hall where these animals were the centrepiece of the meal.

There are raised platforms throughout the building that provide great viewpoints for these absolutely jaw-dropping mosaics.

The House of Dionysos was probably built at the end of the 2nd century but abandoned in the 4th century after a massive earthquake struck the region.

The Toumpallos is an underground complex of caves and corridors carved into the rock. It was initially thought to be an ancient Greek army camp but these days archaeologists believe it was a Temple to Apollo and further excavations are still taking place.

The Park also includes other sites and monuments from prehistoric times to the Middle Ages, such as the Asklepieion, the Odeon, the Agora, the Saranta Kolones (Forty Columns) Castle, and the Limeniotissa ruins of an Early Christian Basilica.

The stunning Odeon dates back to the 2nd century and was an amphitheatre that has been restored and is now used for musical and theatrical performances. Can you imagine what it would be like to take in a musical performance here?

The Odeon overlooks the Agora or forum, which would have been surrounded by four porticos with white marble and granite columns.

The castle of Forty Columns is known as the Saranda Kolones and it served as a defensive castle to protect from Arab raids. The castle was built in the 7th century and was in use until 1223 when the same devasting earthquake that destroyed the house of Dionysus ruined the castle.

This area of the Paphos Archaeological Site is equally impressive. The castle of Forty Columns known as Saranda Kolones is south of the forum and nearby Paphos port.

A Paphos harbour landmark the lighthouse was built in 1888 and is a landmark here in Pafos.  It was built to protect ships passing through the Suez Canal.

During the last restoration of the lighthouse, a Museum was opened within it and the permanent exhibition entitled “Cyprus, the sea and lighthouses – eternal history” and the cost of entry is included in your Park ticket.

Tomb of the Kings

Near the Archaeological park is the Tomb of the Kings a necropolis or graveyard. Despite its name, it was aristocrats and high officials that were buried there. They took this name because of the magnificence of the tombs, which are entirely cut off the rock.

Historians believe that the tombs held the remains of the families of high-ranking officials and prominent citizens from Ptolemy’s Nea Pafos. Burials continued into the early Roman era during the 3rd century.

The entrance fee for the tomb is only 2.50€. For groups comprised of more than 10 people, there is a 20% discount on the entrance fees or you can obtain the Paphos pass for €8.50.

Map of the Archaeological Park

How to get to the Archaeological Park

The architectural complex is located next to the sea coast in the area of ​​New Paphos or, in other words, Kato Paphos. The Paphos World Heritage Site is easily accessible from different parts of the city.

Because the mosaics of Paphos are situated close to the harbour it is a short walk to many great seafood restaurants where you can taste the food of Cyprus and enjoy some people watching and even take a boat tour if you fancy it.