Bundoran is on the Wild Atlantic Way and is a lovely little Irish seaside village to spend some quality time in. From the Wishing Chair and Fairy Bridges at Tullan Strand to surfing on the magnificent waves, Bundoran is the perfect beach experience.

Tullan Strand Bundoran is a glorious golden beach that surfers flock to when the waves are high. Located on the Donegal coast in Bundoran and one of the many beaches that can be found here.

Tullan Strand beach is a true surfer’s paradise from webcams to surf shops this area is heaven in the summer months and the views are outstanding. You can see County Sligo and across to Donegal and the Slieve League Cliffs which easily outstrip the Cliffs of Moher for their lack of tourists. This part of Ireland is known as the Wild Atlantic Way and it is truly the wild west of Ireland.

We had stopped for a visit to check out the Wishing Chair at Bundoran along with the world-famous Fairy Bridges – the stuff of many a legend in these parts.

If you are planning a visit to Ireland here is everything you need to know before you get here.

On walking down the path to visit the Fairy Bridges we spotted a memorial to some Canadian airmen who had died in a crash at the Strand in 1944. 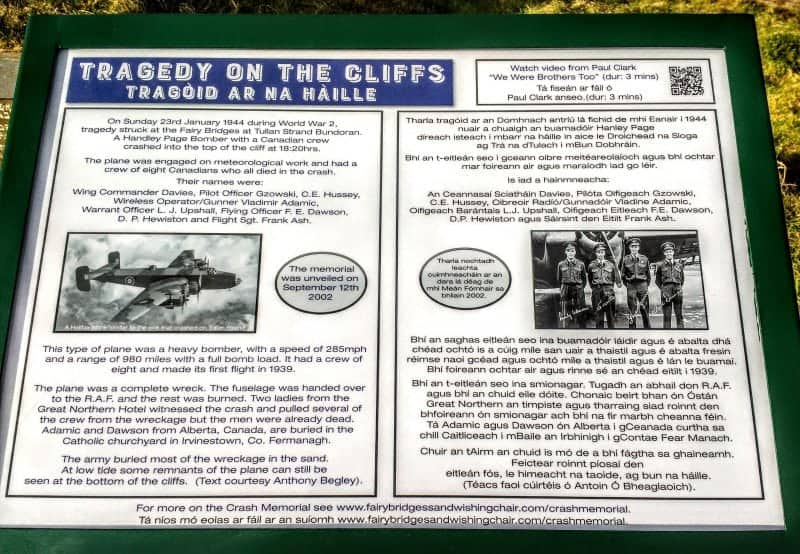 During WWII Ireland was officially neutral however there was a secret agreement between the Irish government and the British government resulting in what became known as the Donegal Corridor.  British planes could use the air route over north Leitrim and south Donegal that linked the Atlantic Ocean to Northern Ireland, so long as they kept above a certain altitude and did not become a “nuisance” or noticeable to the coastal villages and areas.

On 10th April 1941, a plane forced landed in neutral Ireland at Tullan Strand, Bundoran because they ran out of fuel. The Irish Army escorted the men to the Finner Army Camp, assuming they would be held there. They were not aware of the secret deal that had been arranged. The necessary fuel was delivered to Beleek and then transported to Bundoran by the Irish army, the flying boat was re-fuelled then men returned to Bundoran from Finner, and the plane took off again on its mission.

In 1944 the 518 Squadron took off from Scotland on their meteorological mission, it was critical intelligence that was needed on the weather to protect the patrols for the Allied shipping convoys bringing supplies from Canada and America to England. These missions were so important that the crews went out regardless of the weather conditions. Tragically, the plane hit the cliffs near the Fairy Bridges on Tullan Strand in Bundoran and all ten men were killed. 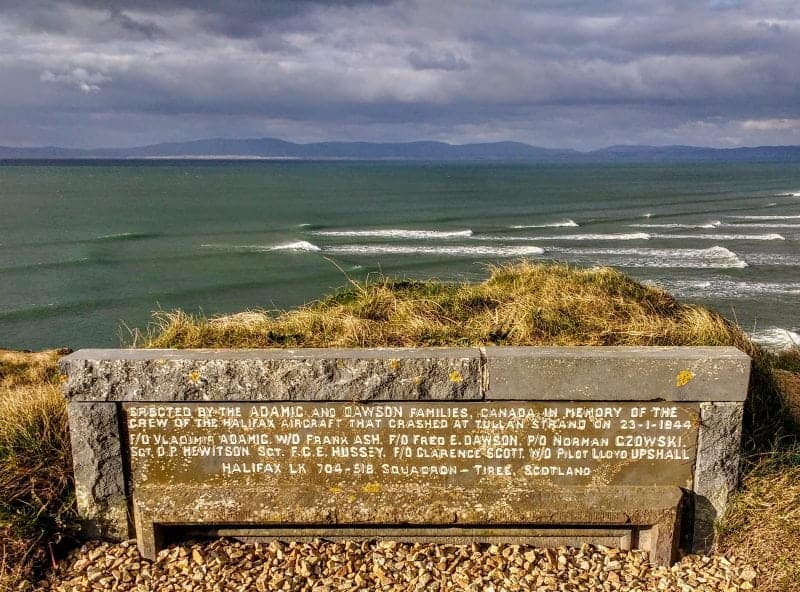 A monument to the Halifax crash can be seen today at Tullan Strand. A reminder of all that WWII brought to Europe and how Canadians were impacted.

We spend a few minutes at the memorial in respect of the price these Canadians had paid. It’s always surprising just how the impact of the war is still being felt.

Tullan Strand and the Wishing Chair

Continuing on down the path we saw the signs for the Wishing Chair and the Fairy Bridges and followed the trail. 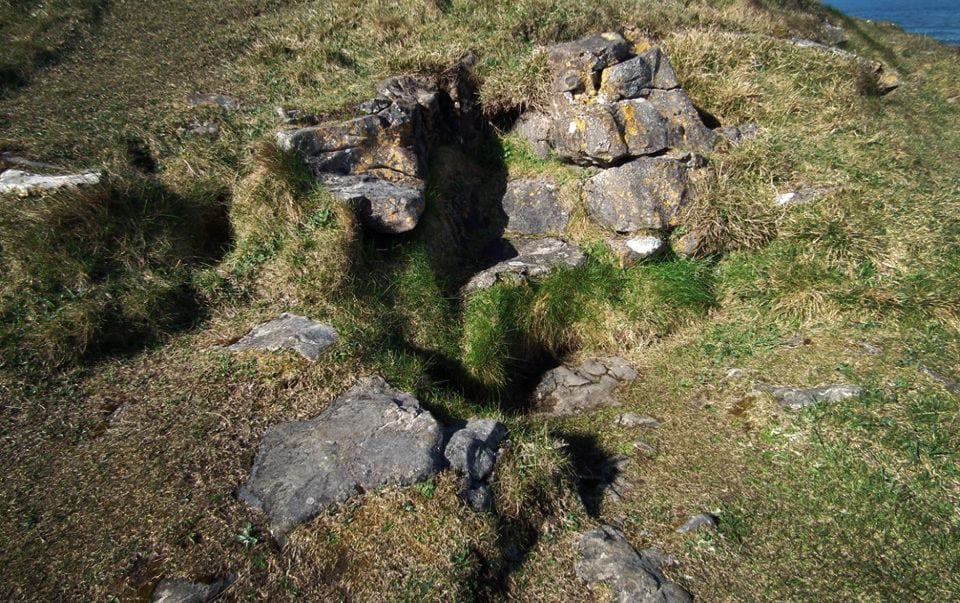 The Fairy Bridges and the Wishing Chair are signed from Roguey’s Walk and have been a Bundoran attraction and subject to legends and stories dating back to the 1700s and probably further.

The fairy bridges are sea stacks hundreds of years old, locals believed them to be haunted by the fairies with the result of the name “The Fairy Bridges”. 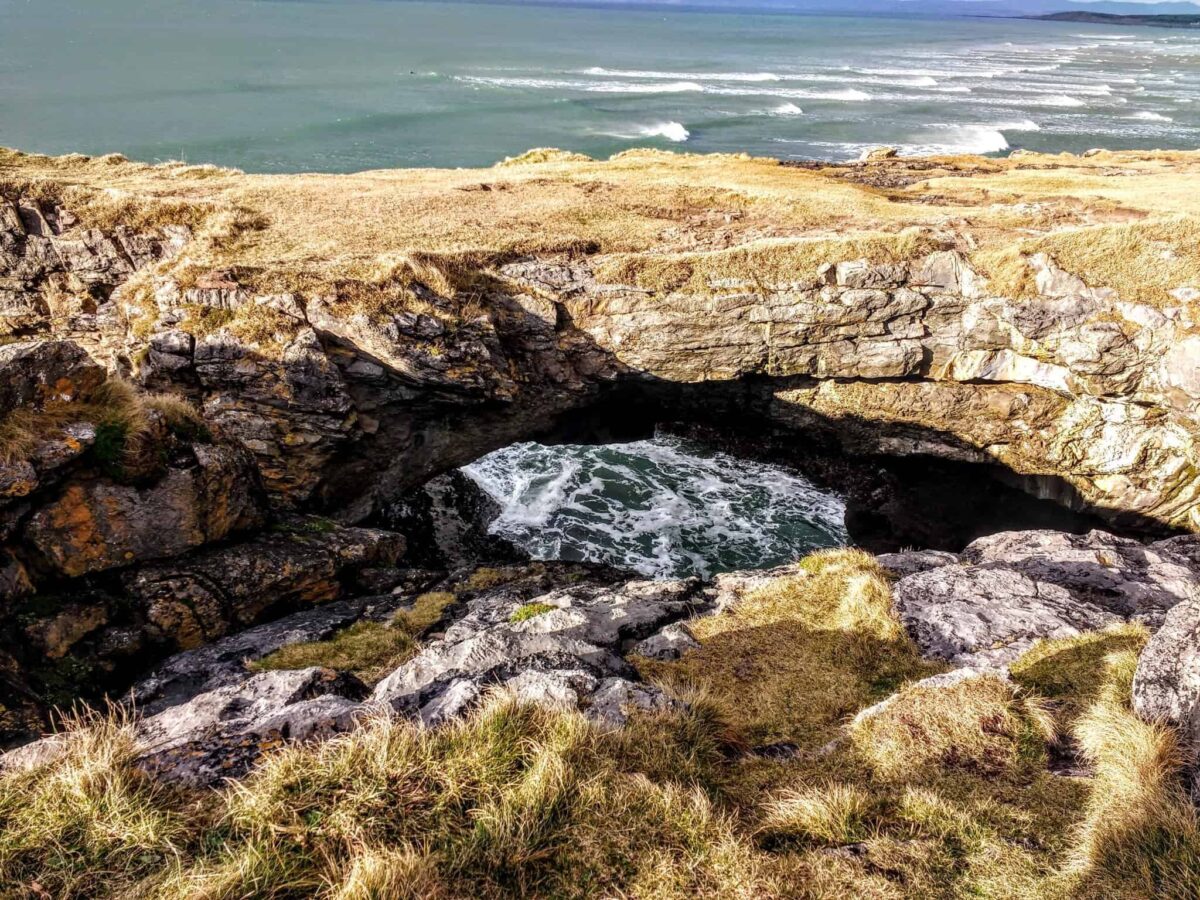 Legend says it is advised to approach the Wishing Chair with care or your wish won’t come true.

“Wishers are advised to sit down slowly holding on to both “arms” of the chair and then pause for at least 15 seconds to take in the stunning scenery that surrounds them – Donegal Bay to their left, Tullan Strand straight ahead and the Dartry Mountains to the right.”  (from Discover Bundoran).

Apparently, you must keep your wish secret and silent whilst thinking about all those who have sat in the wishing chair before you.  Finally, when you rise to leave you must tap the seat twice which is believed will confirm that your wish is a genuine one.

This extract taken from a poem simply titled “Bundoran” which appears in the 1944 Bundoran Visitor’s Guide, written by former Town Clerk Edward Daly

The Fairy Bridges where the spirits,
In moon-lit splendour sport and play,
Span chasms dark and lowering where
The lashing waters dash and spray.

And then the dear old Wishing Chair,
Where heart sick maids petitions lay,
Where thousands found each wish come true,
And ever bless the “happy day”.

Check out this list of 40 movies to watch before you visit Ireland, the stories, legends and tales of great craic abound.

Inspired Pin it for later

Sorry to hear about the tragic history behind these beautiful spots. I love the story about the legends and fairies and how the name came into place. I wonder why they believed fairies would “haunt” the place, In our “new-age” world we deem them to be more angelic don’t we?

It’s good to read about the histories of one place. I would love to visit this place someday. The Wishing Chair excites me! And of course, the landscape that would be very lovely to capture!

History is exactly the reason I travel to see such beautiful natural sites and to learn stuff I never knew it makes it all come alive and brings home the past.

It looks so beautiful, despite the sad stories behind the pretty pictures. I would love to visit and experience for myself, in order to make a wish on the Wishing Chair. I love this post. Thank you for sharing!

The best part of travelling I find is hearing these kinds of stories and getting to see and hear history you never knew about.

I love reading myths and legends when visiting a place! It is such an interesting story about making a wishes at the chair. But also places like this often hold a tragic stories like the one with the plane you just told. Thank you for sharing this place.

That is exactly what I love about traveling in Europe and other places – In Canada we are such a young country we don’t have that kind of mythology to call our own like older countries do. Of course we have First Nations and Indigenous stories which are really fascinating but we just don’t have the history deep in the stones of ruined buildings and other sites.

It’s a sad story! I wonder why all the sites turn into haunted sites once they meet a tragic end. This reminds me of Corrigedor Island in the Philippines where thousands of soldiers got killed and earned the haunted tag! Loved the legend of the wishing chair though!

True it is sad but I guess that little edge of sadness is what gives a human touch to these kinds of sites and legends grow up around events like this.

That’s such an interesting but sad story about the Donegal Corridor. However the Fairy Bridges and Wishing Chair look so enchanting. Thanks for the advice on how to approach the Wishing Chair, next time we’re over there we will certainly visit!