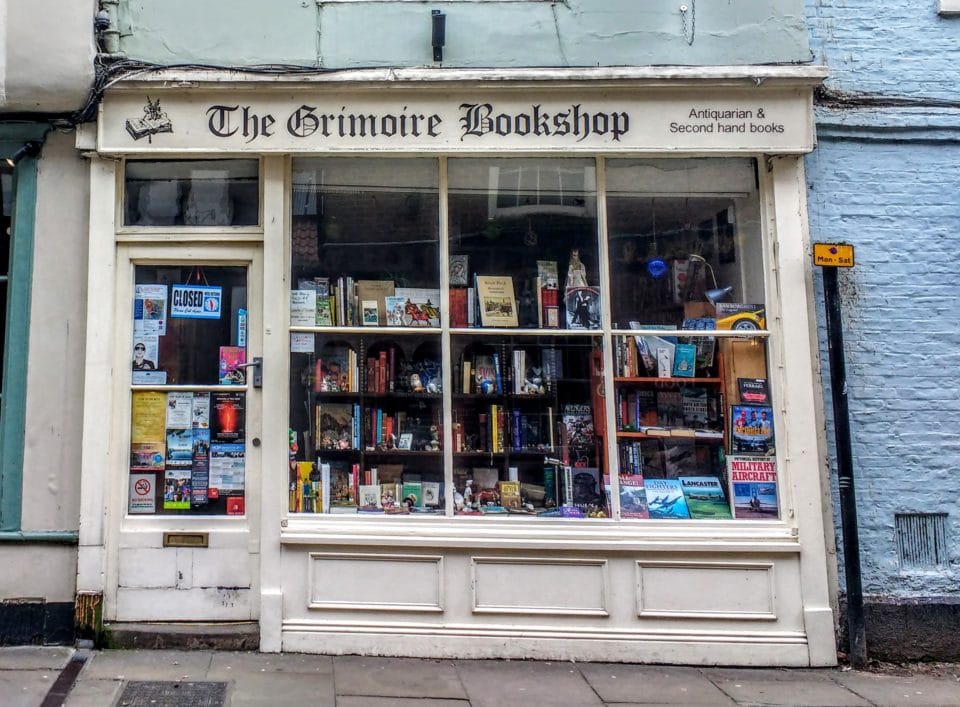 Visiting the Shambles in York has been a dream of mine since I read about it in my high school history class many, many moons ago. The appeal of an ancient medieval street and area dating back to the Domesday Book inspired my imagination like nothing else. 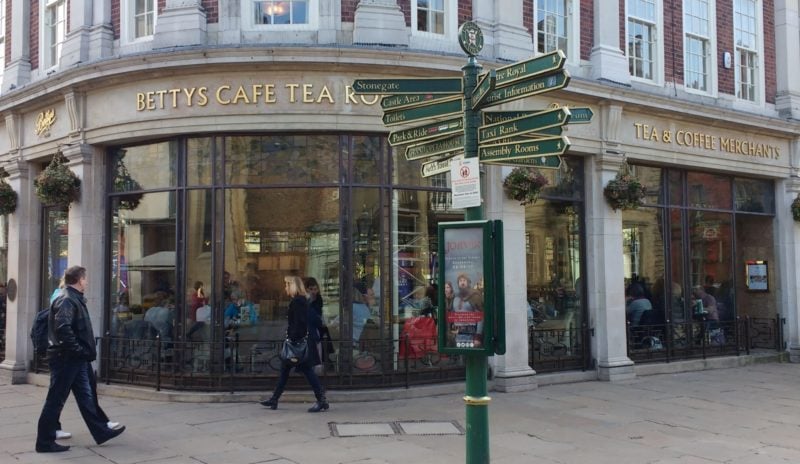 From that moment on I was determined to visit the Shambles York, and then came Harry Potter and I learned that the Shambles was the inspiration for Diagon Alley. Since that time several shops that have a Harry Potter focus have opened to much acclaim in the area.

15 Things to see and do in North Yorkshire

The History of the Shambles York

The Shambles as a term is used to describe a maze of narrow twisty lanes in the centre of York. At the heart of the Shambles is the actual lane called The Shambles and it is obviously the best preserved medieval streets in the world. The Domesday Book of William the Conqueror mentions the Shambles in 1086. Many of the existing buildings date back to 1350-1475 and are chock full of stories and interesting history. 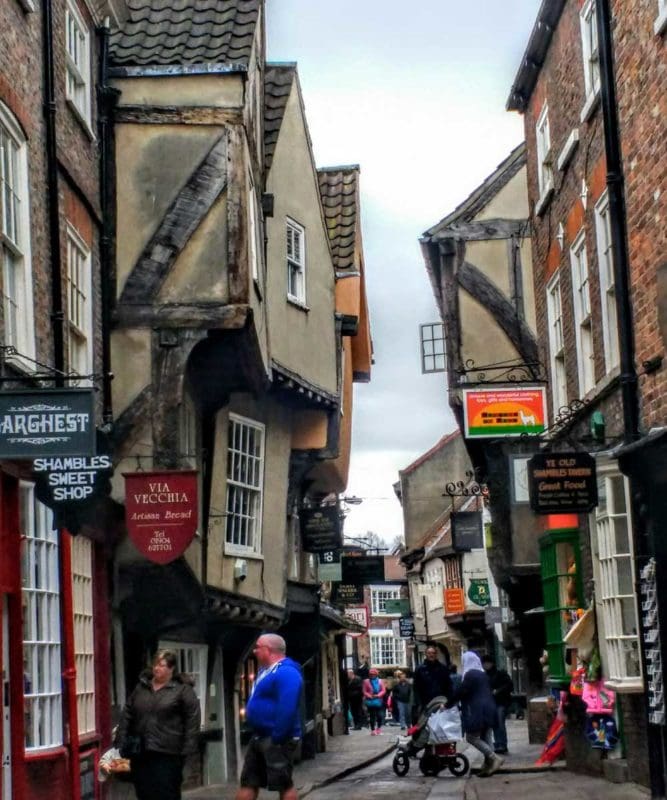 The Shambles was a street of butchers’ shops and houses, many complete with a slaughterhouse at the back of the premises, where they prepared there own “home-grown” meats.  The meat was hung up outside the shops and laid out for sale on what are now the shop window-bottoms.  It is still possible to see some of the original butcher’s meat-hooks attached to the shop fronts.

Given the times, there was a constant issue of how to dispose of the waste produced by the slaughter of animals in the city.  One thing that was done that can be seen today is that the pavements are raised on either side of the street so a channel is formed that can be washed with buckets of water a few times a week.

In parts of the Shambles, you will notice that you can touch both sides of the street with your arms stretched out. This has an extremely practical purpose.  It not only protected the materials (wattle and daub) that made up the buildings outward covering but it kept the meat out of direct sunlight allowing it to last longer without refrigeration. 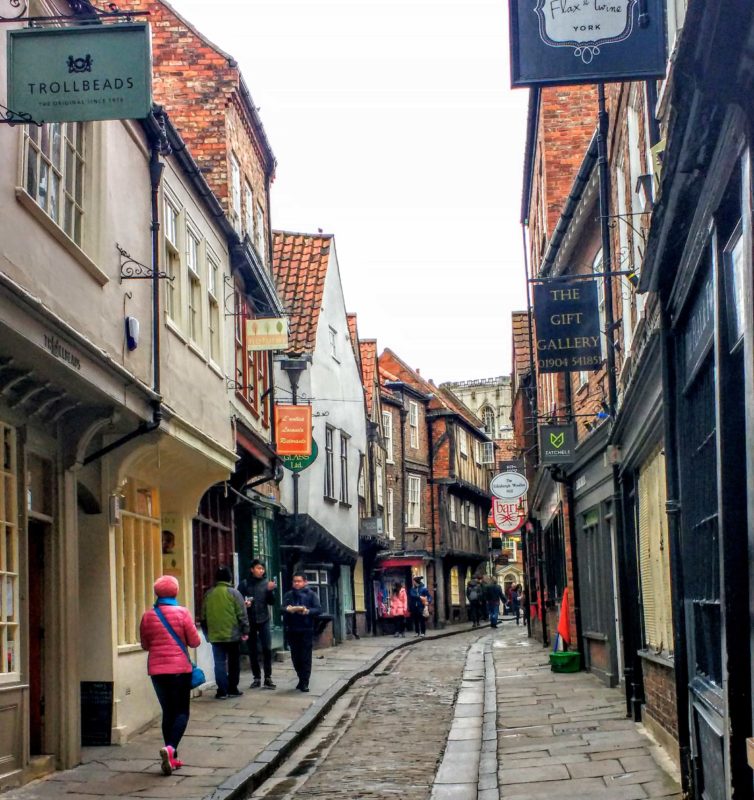 One of the historic attractions in the Shambles York is Margaret Clitherow’s house. A butcher’s wife who lived in this street, Margaret Clitherow was brought up in the reformed religion. In 1574 she became a Catholic and allowed her home to be used for the shelter of persecuted priests. Over the course of 12 years of hiding them, she was arrested on several occasions and spent over 3 years imprisoned. Margaret refused to speak or plead at her trial and was condemned to be crushed to death, naked under a heavy stone on the Ouse Bridge in York.  Margaret was later made a Saint by the Church.

York is also attracting Harry Potter fans or Potterheads from around the world. Once they learned that the Shambles was the real “Diagon Alley” or rather the inspiration for it the fans came in droves.

How do I get to the Shambles?

You can easily access the Shambles from York train station, just 15 minutes walk away.

When’s the best time to go?

The Shambles York gets particularly busy at the weekends, so for the best shopping and strolling experience, you should plan your visit midweek. Shops are open 7 days a week 10.00am to 6.00pm.

Often referred to as “Harry Potter Street”; the Shambles York is said to have been the inspiration for Diagon Alley – the iconic alley that appears in a number of the books & movies. Once packed with butchers and meathooks; the beautiful street has been preserved over the centuries; maintaining a range of historic features and its original character.

The street is a must-visit for any true Potterheads, thanks not only to its uncanny resemblance to Diagon Valley; but for the 2 Harry Potter shops that currently reside there…

The Shop That Must Not Be Named 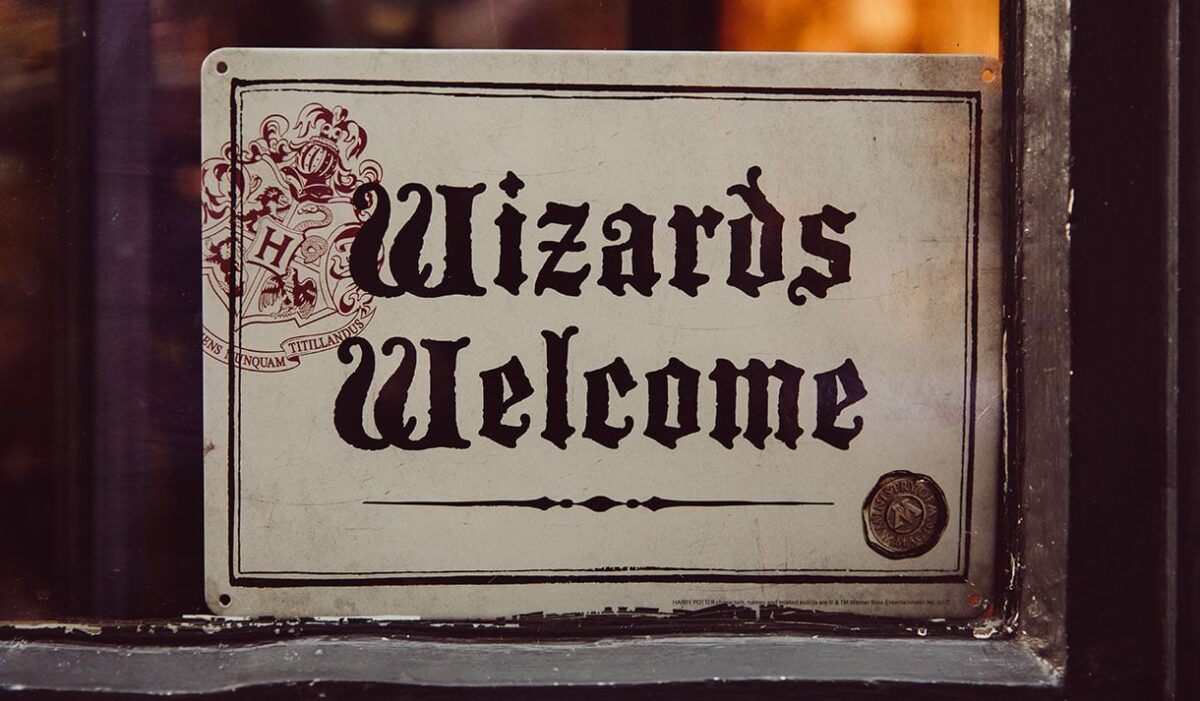 Located at the 30 The Shambles, York – The Shop That Must Not Be Named is fabulous. With its free broom parking to the Potterized ice cube trays, this place is a wonderland of Potter merchandise. 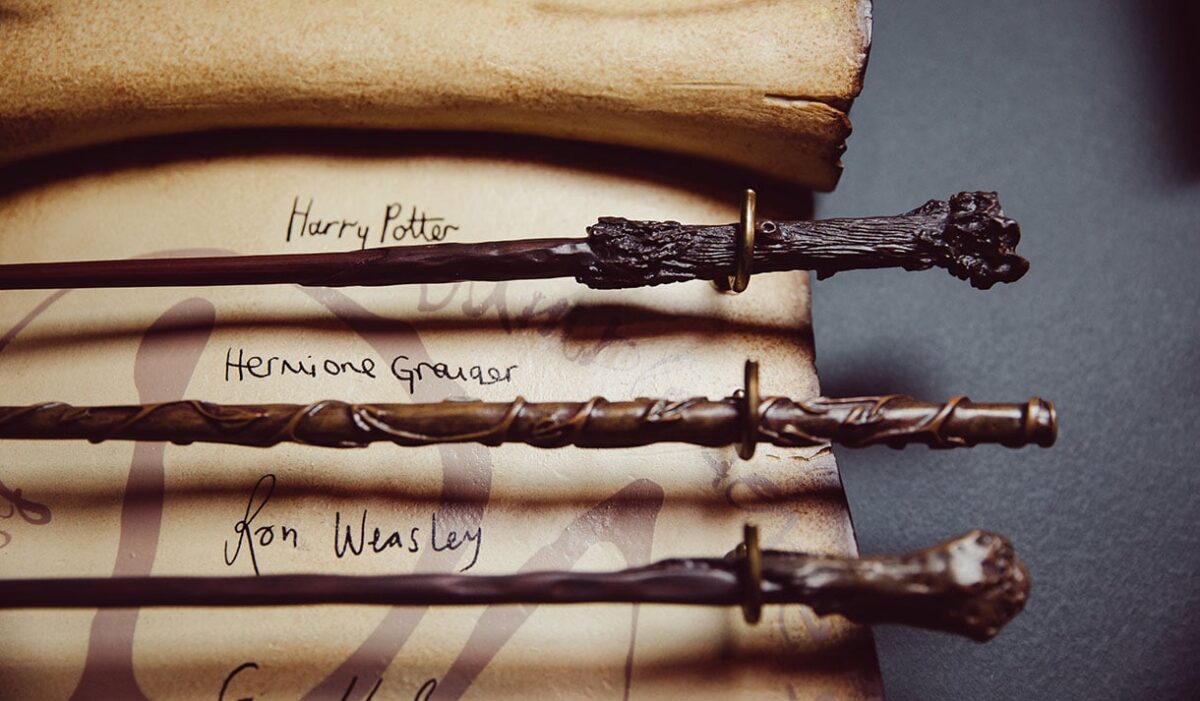 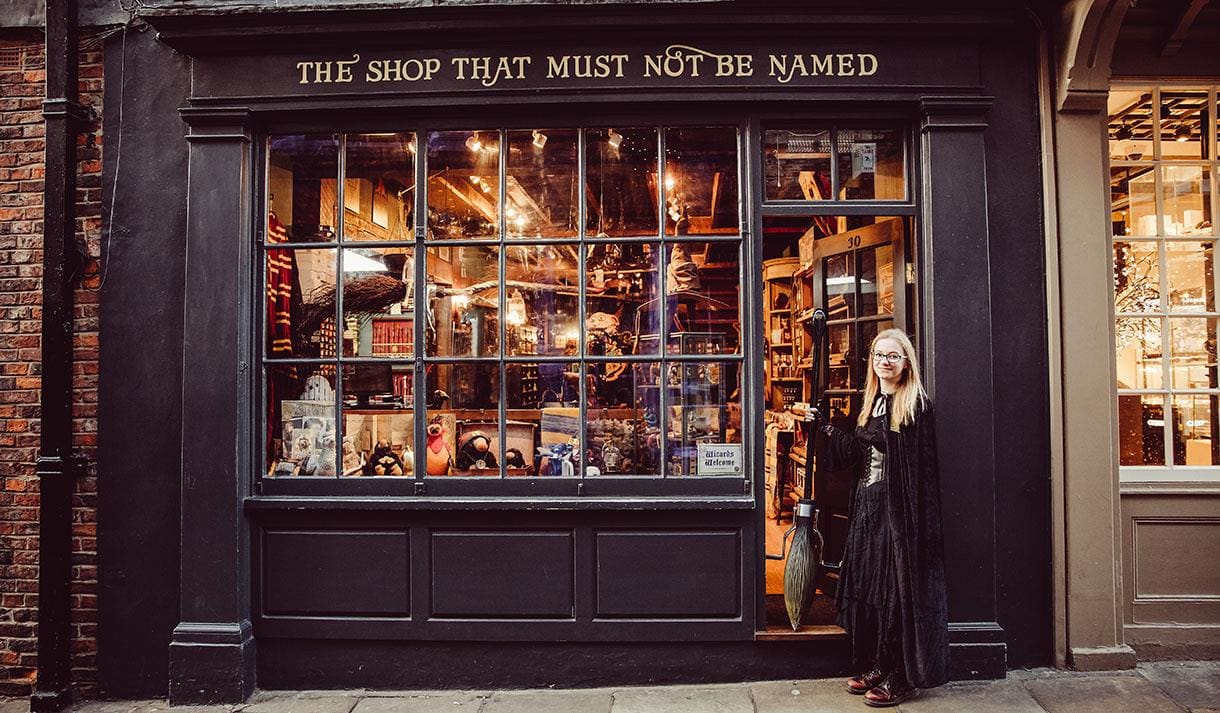 The World of Wizardry

A few shop fronts down is another Harry Potter fan treat The World of Wizardry. So much Harry Potter merchandise the shop is literally overflowing. 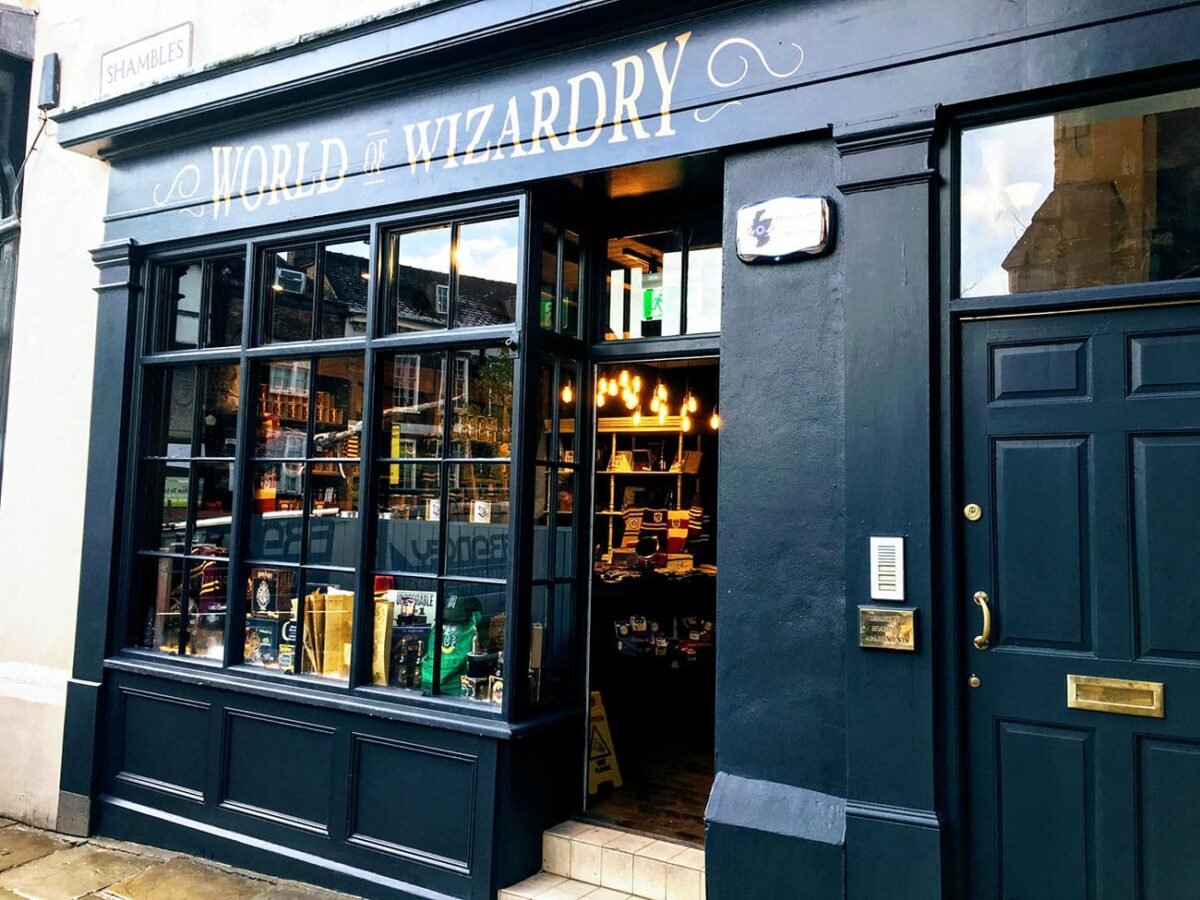 ©The World of Wizardry

This is more Potter heaven, similar to the Shop that must not be Named you will find Hogwarts student to wait on you and as much Potter paraphernalia as you can carry. 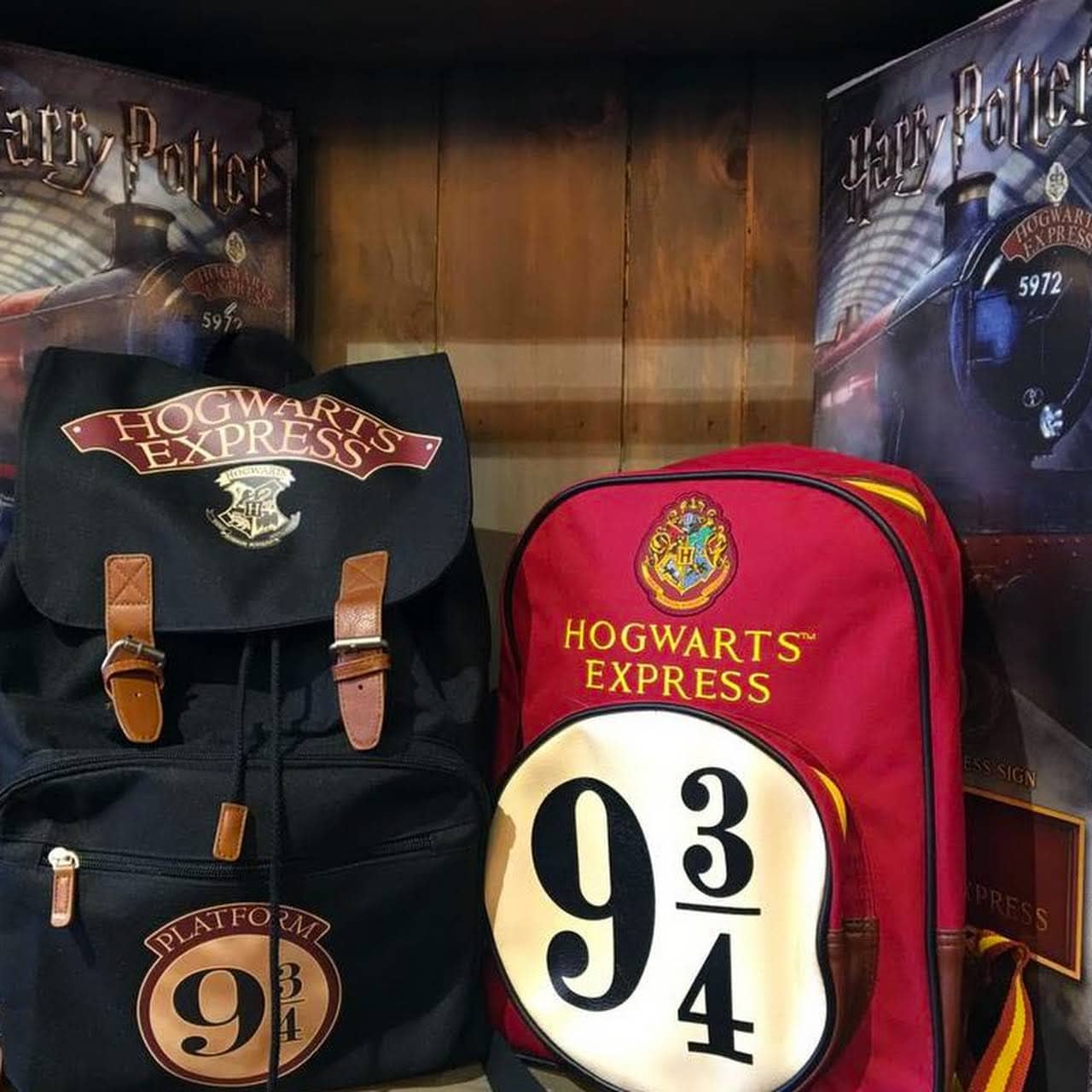 ©The World Of Wizadry

Tucked away in the back of the shop though is some other merchandise for fantasy series fans such as Game of Thrones.

The Boy Wizard has locations in Edinburgh, York and London and in York is the Harry Potter shop with the bright red front. Lots of great merchandise can be found here with some really good discounted prices if you are looking for a bargain. 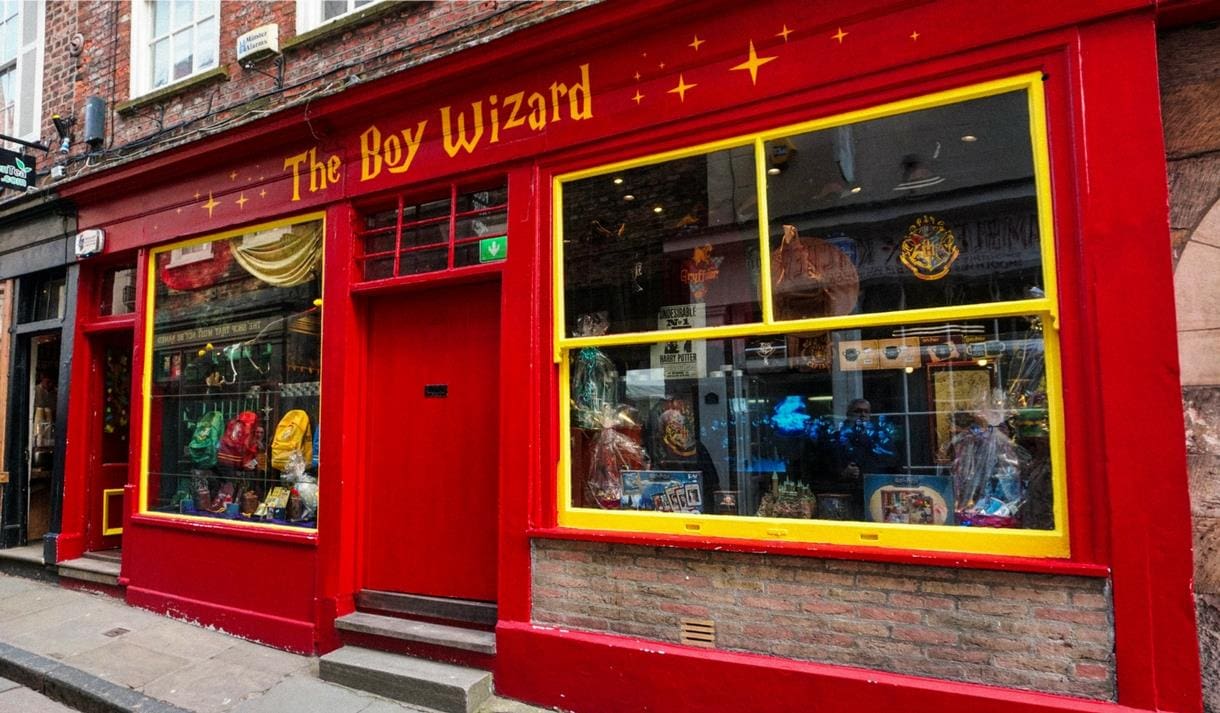 Is the place to mix up your own magical potions and become a trainee wizard. A drinks emporium for Wizards they serve the ancient recipes of Agnes de Molay a French witch from the 14th century. They have Serpents Venom, Lions Roar Elixir and Dragon’s Breath potions. 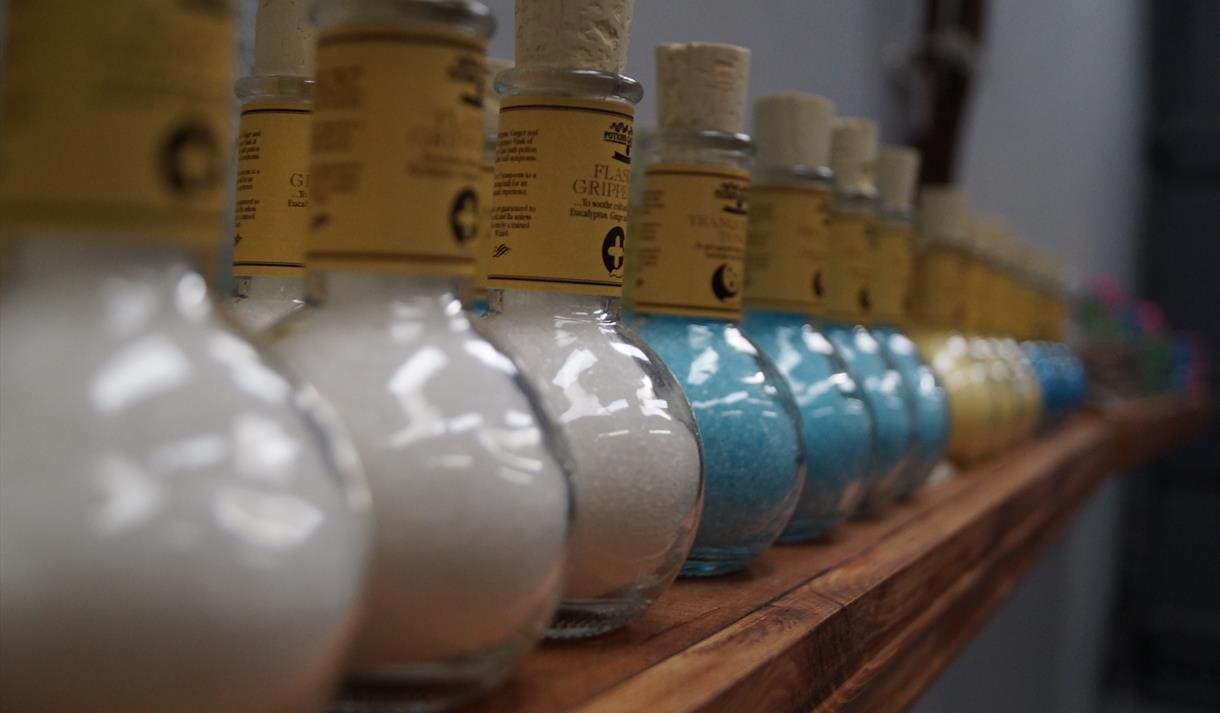 Hidden away in the witches hole at the back of the shop you can visit beyond the magic wall to see a 6000 piece Hogwarts lego set. Why not drop by and mix up your own versions of Basilisk Blood and Elixir of Love 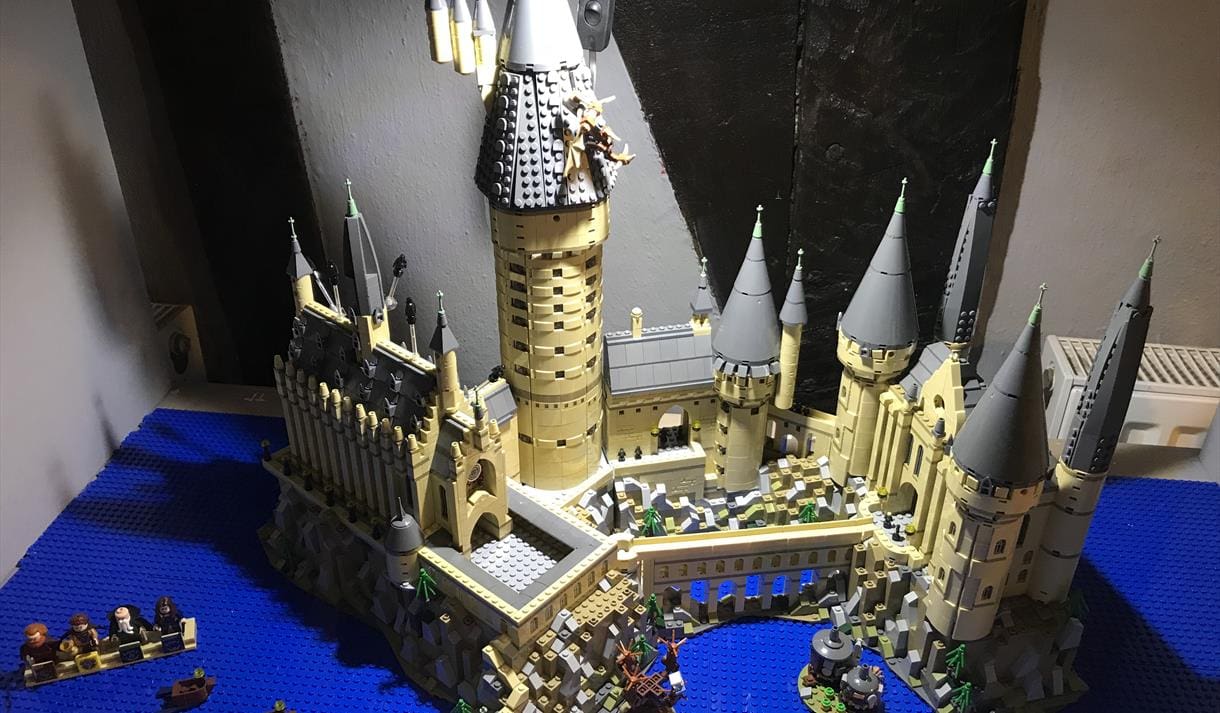 Harry Potter filming sites in York outside the Shambles

The pedestrian bridge across the platforms at York Station is used as a Harry Potter filming location in The Philosopher’s Stone. It looks quite different today though as the barriers are now made of plastic rather than thick metal beams.

A ride on a steam train has always been a dream, but the chance to ride the Hogwarts Express Train to Hogsmeade was an opportunity not to be missed.  The famous Harry Potter trains ran on the old steam train lines managed by the North Yorkshire Moors Railway. 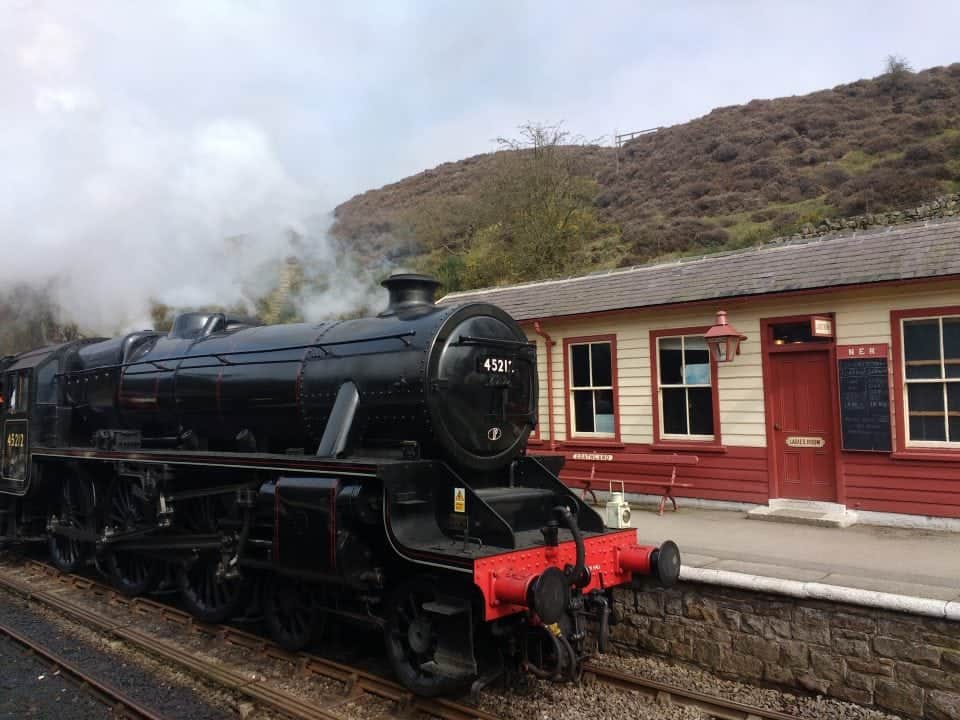 The North Yorkshire Moors Railway (NYMR) heritage steam trains run on the NYMR line from Grosmont to Pickering and include a stop at the famous Harry Potter station in Goathland on its journey. These trains are all maintained and operated by volunteers.

A Whitby / Goathland Return ticket costs £23 per adult and £10.50 per child and you can find out more on the North Yorkshire Moors Railway Website.

Where to eat in the Shambles York

This area has a selection of international foods presented in small “sheds” in the Shambles Market in conjunction with the Shambles Farmer’s Market. Some of the sheds include;

Los Moros means the “Moors” in Spanish and has come to mean the people from Berbers, Arabic and Jewish populations that lived in Andalucia in the Middle Ages. 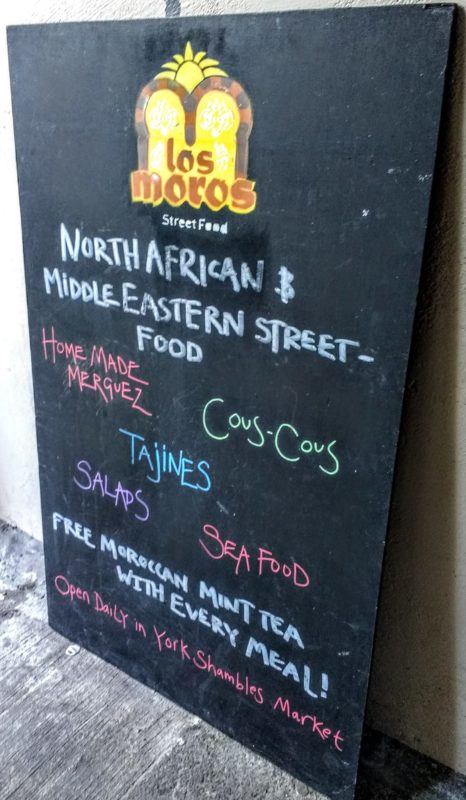 A lovely taste of North African and Levantine street food and they have now opened a restaurant. You can have Chermoula Lamb’s Liver with Lebanese spicy potatoes (batata harra) there is some wonderful hummus, vegan falafels and salads so something for everyone.

Krep serves their authentic French Crêpes and Galettes (savoury crêpes) from a vintage Citroen. They also serve amazingly good coffee that is from a local Yorkshire roaster. 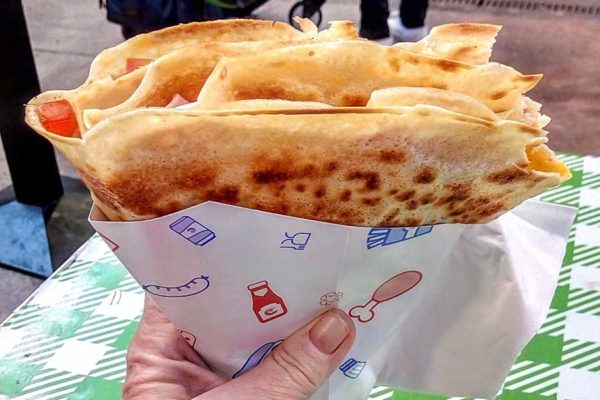 Pizzoli’ is a real Sicilian street-food experience that serves authentic, Italian, homemade pizza, lasagne and focaccia,  and they are known for their pizzolo (a flatbread pizza filled with different ingredients) and arancino (risotto croquette filled with Ragu’, ham & cheese or four kinds of cheese). Shambles Wraps:

Shambles wraps is a range of Turkish sautéed meat wraps and grilled kufta kebab options. From grilled lamb to vegan and vegetarian options each wrap comes with a free soft drink. 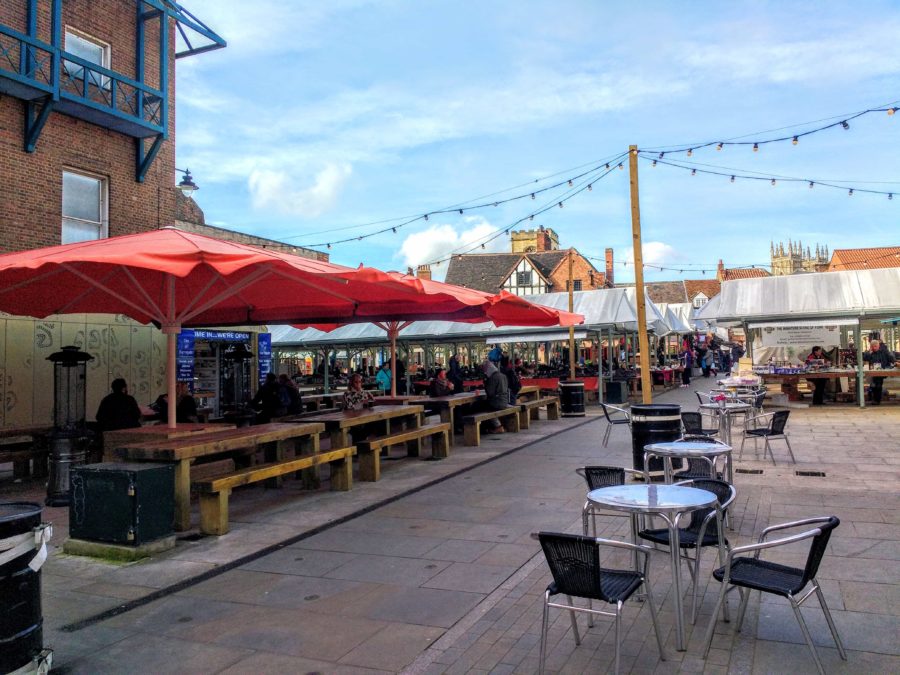 Treat yourself at lunchtime with a visit to The Chicken Shack for some delectable delights. Local business, Winner Winner have brought their own recipe of marinated and brined (for 12hrs) rotisserie chicken, and their famous chicken wings to the Shambles Market for hungry visitors

Café M serves delicious nibbles and hot drinks throughout the day. Their range of coffees includes Americano, Latte, Cappuccino, Mocha and their special Turkish coffee. For something less stimulating, pick a tea or herbal infusion; choices include Yorkshire tea, green tea (plain or flavoured with jasmine or lemon), earl grey, vanilla chai, and a range of caffeine-free options such as decaf black tea, redbush, peppermint, Chamomile and refreshing fruit infusions. 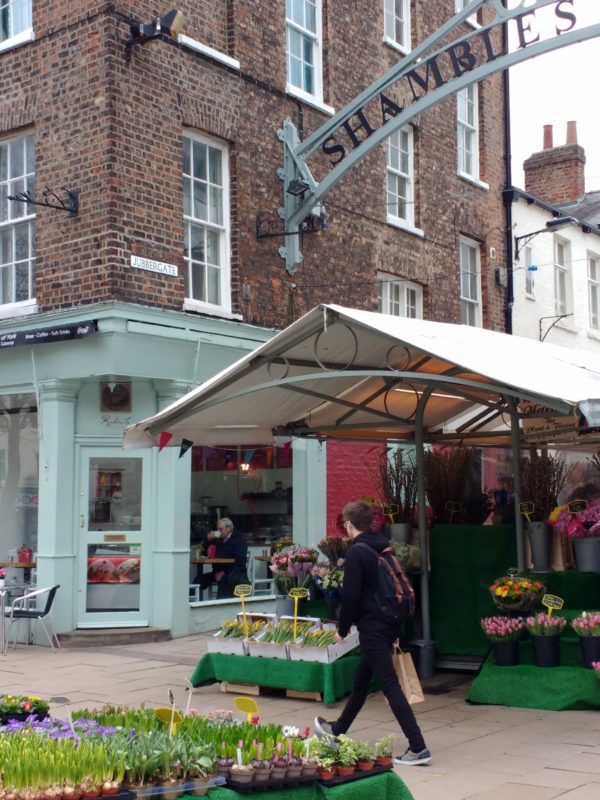 A great gastropub well known for its Wall of Ales they offer you a vast selection of Yorkshire cask, keg and bottled ales for your enjoyment. The food is all sourced locally and the Tavern has won numerous awards. 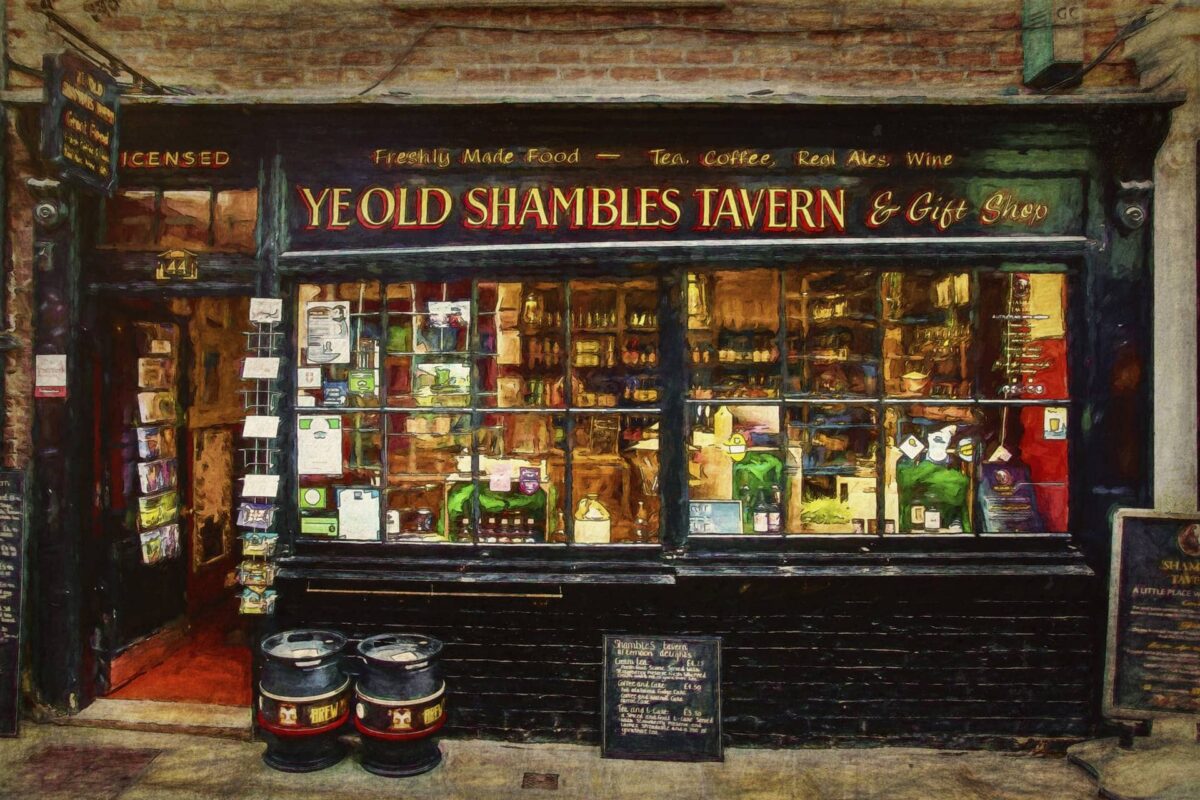 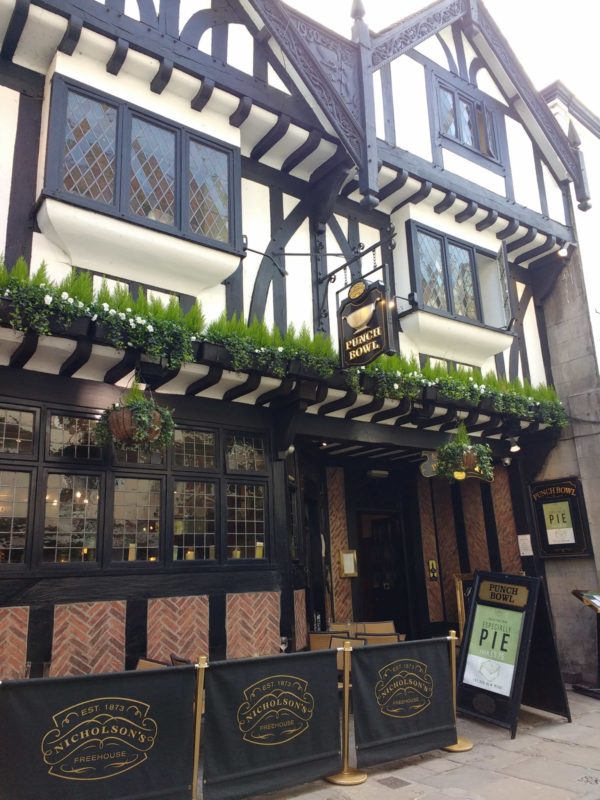 Said to be haunted this is a traditional pub with a vast range of real ales and great food.

The Punch Bowl has been a pub for over 4 centuries but it has suffered two major fires and been restored.  The political connection comes from the Whigs party which preferred punch over claret which was a tory drink.

What a beautiful old building, it is timber-framed and dates from the 1600s. It has been a restaurant since 1929 and it serves classic English food. We had some traditional fish and chips and a steak pie and some great local ales. 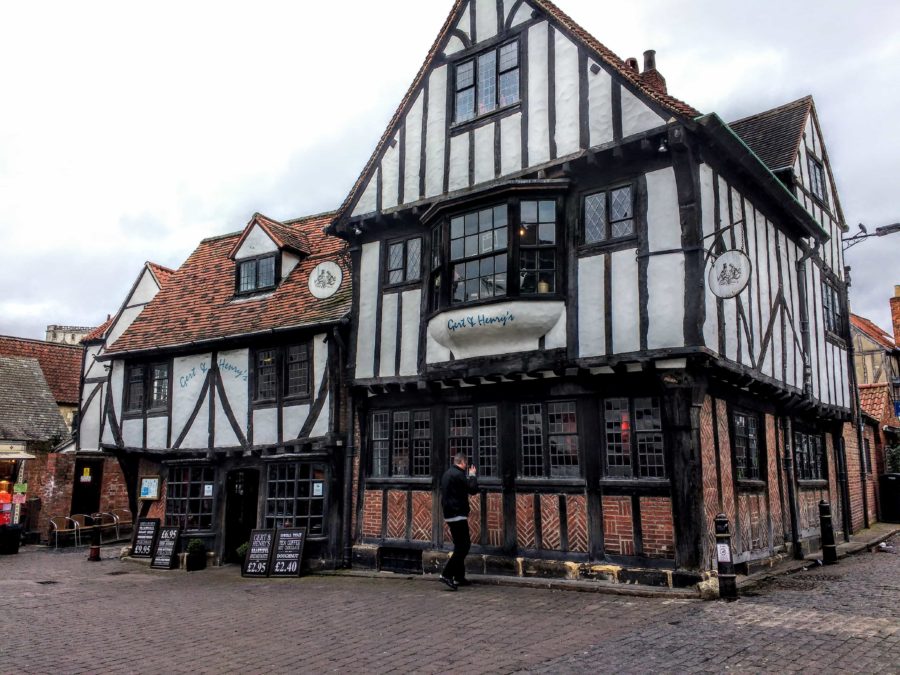 With so many classic pubs, alehouses, restaurants and cafes to choose from and a wealth of heritage, historic and truly unique buildings it worth a wander and perhaps a stop in every interesting place you find. You certainly won’t experience this in N. America lol. 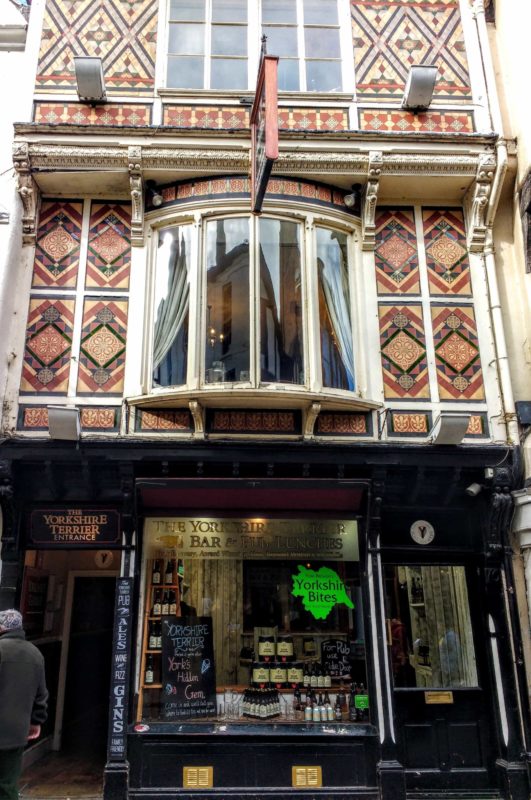 Have you been to the Shambles York? What did you like the best?

Explore the Killary Fjord in glorious Connemara Ireland
Exploring the Killar...
What to eat in Kuala Lumpur all the best dishes
7 of the Best dishes...
Travelling and exploring the Amalfi and Capri Coast
The Best Itinerary t...
Avoca Ireland a fabulous day trip to the Avoca Mill
Avoca Mill Handweave...
Share
Destinations  / England 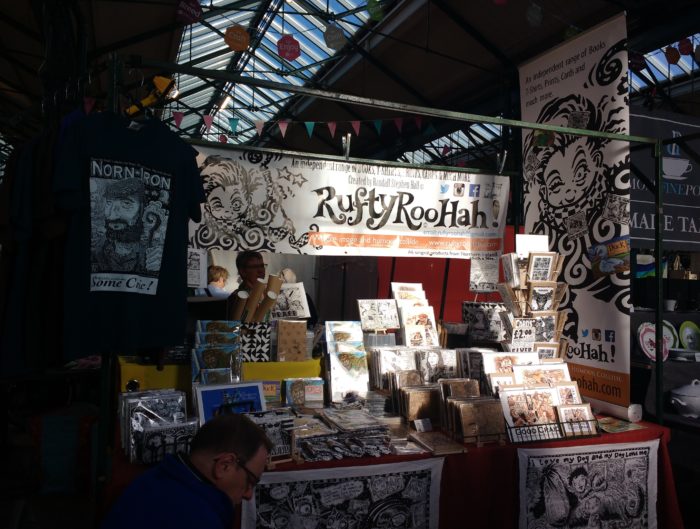 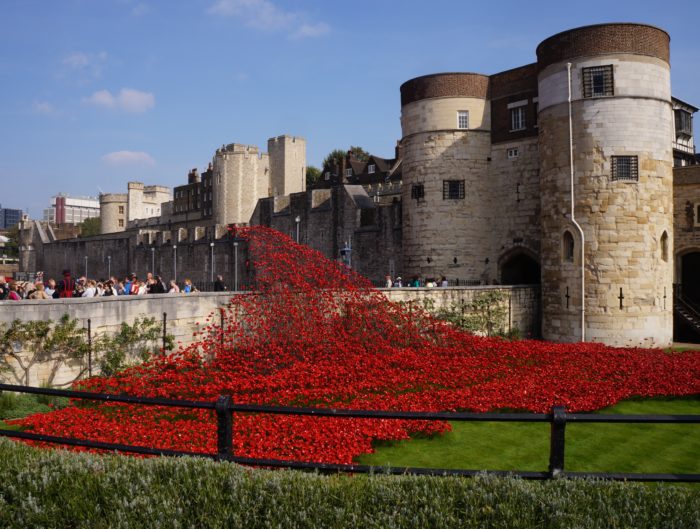 Getting inside the Tower of London and its extraordinary history
January 2, 2020

I only recently went to York but loved it. I’m definitely going again and going to look more closely at the things you mention. Plus I want to try some of that great food! When we were there we took the grandkids to Dig. I could have spent hours in there.

That’s the one place I wanted to go but never made it I love the whole idea of Dig.

Loved the article. So many great photos to enjoy the ‘visit’. Great fun and a chance to experience real medieval world.

I went to York on a day trip once, many years ago. I wish I had known about this street! I love your photos – it looks absolutely charming. If I ever make it back there, it’s going on my list.

If you get a chance to go back go there is just so much to explore in Yorkshire it has become one of my favourite areas in the UK.

A lovely reminder of our trip there in December with friends. What a sad tale about Margaret though. I didn’t know that story. Beautiful.

I went there 23 years ago and this post bought back those memories. Thanks. It was in the time before Harry Potter and now I want to go back and experience this side of the Shambles.

I can’t wait to go back again myself love Yorkshire and York – well actually the whole area is just so beautiful and they have some amazing farm stores and restaurants everywhere.