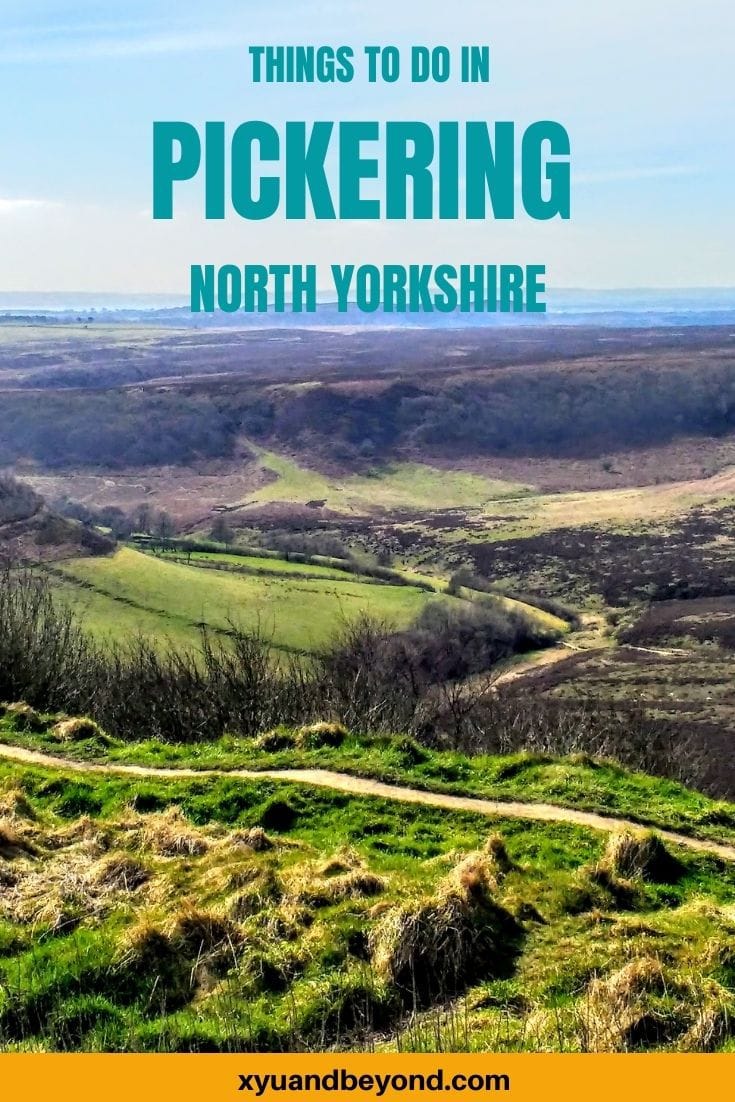 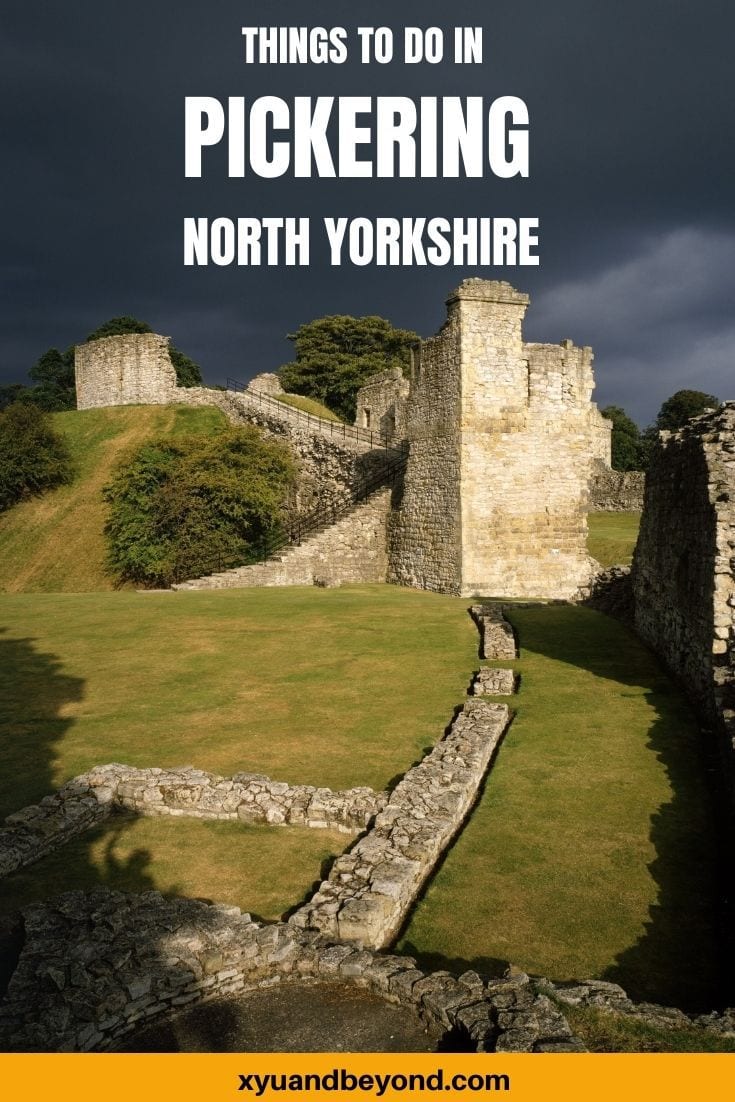 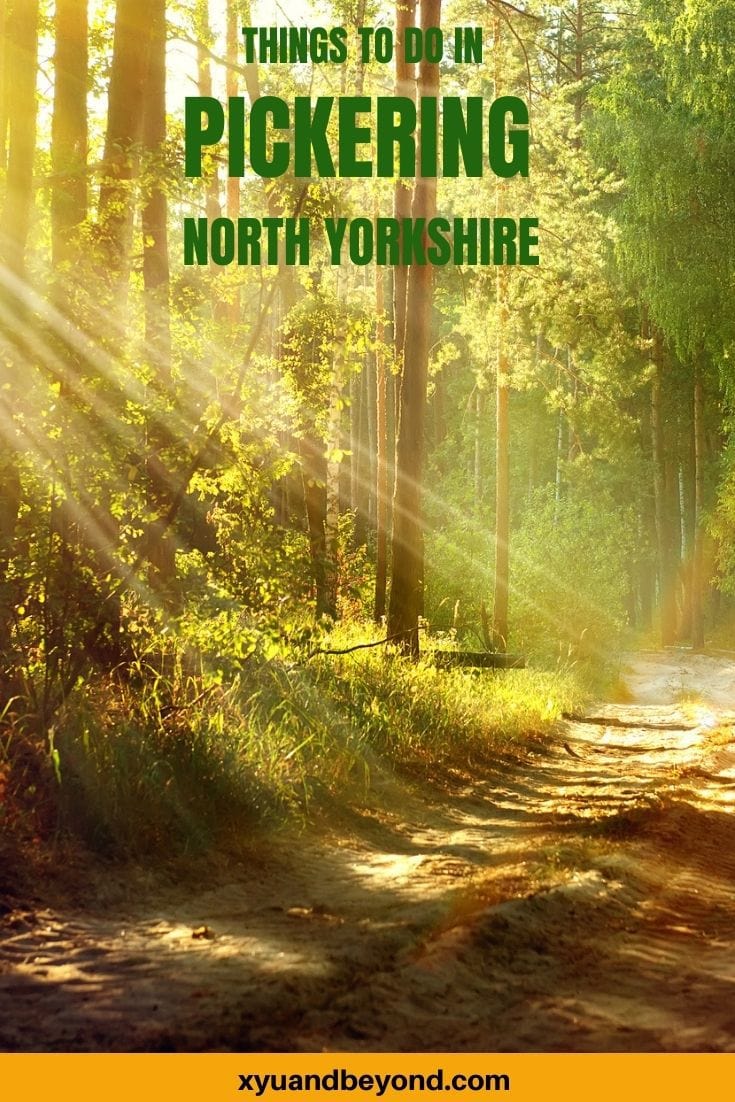 What to Do in Pickering North Yorkshire

I fell in love with Pickering when I was housesitting in Yorkshire. This lovely village is set in the heart of the stunning North Yorkshire Moors and is a stop on the North Yorkshire Moors steam train. Pickering is a traditional market town with a small population of around 7000, and a market held once a week. There’s a variety of things to do in Pickering and it is a great base for exploring the countryside and the moors.

Pickering is one of the oldest towns in the area known as Ryedale that was founded by King Peredurus around 270BC. Pickering is a historic market town and the official gateway to the North York Moors National Park.

Best Things to Do in Pickering

St Peter’s and St Paul’s Church right in the heart of Pickering was built on the site of an earlier, Saxon building. Little is known about this early Church, and all that remains is a carved cross shaft and the bowl of the stone font. The Saxon Church on this site may well have been destroyed during William the Conqueror’s ‘harrying of the North’.

The church is famous for its medieval wall paintings, one of which shows St George slaying a dragon, and the paintings themselves remain among the most complete surviving sets in all of Britain. The original church itself was built around 1450 and the paintings were probably done in the following decade.

There are only about 5 of these types of paintings left in Britain and during the Reformation, they were most likely hidden by coats of whitewash. They were discovered in 1852 when work was being carried out in the Church.

The Vicar at the time, the Rev’d Ponsonby, disliked the paintings and wanted them covered over saying ‘As a work of art [they are] fairly ridiculous, would excite feelings of curiosity, and distract the congregation’. He went on to say that ‘the paintings are out of place in a protestant Church, especially in these dangerous times’; he then had them painted over again within a few weeks of their discovery.

By the 1870s the covering paint was removed, although it did cause damage to the paintings the Reverend at that time insisted that restoration should happen and they were re-painted and restored by 1895.

Pickering Castle is one that was originally built by William the Conqueror as he wanted a base in Yorkshire to quell the rebellious Yorkshire men.

The first castle was built on a motte (a central mound or hill) and was wooden with outer palisades and the keep on top of the motte. Ditches were also dug to make assaulting the castle walls very difficult.

Pickering Castle has a long history of royal ownership including King Henry III who gave the castle to his youngest son Thomas. Thomas was instrumental in the downfall of Edward II’s favourite Piers Gaveston. Thomas also refused to march on Bannockburn, Scotland with the king in 1314.

Thomas continued to have a stormy relationship with the King and ended up being executed at Pontefract Castle in 1322. Pickering Castle and its estates were seized by the crown. After passing through many hands and seeing history but avoiding the War of the Roses the Castle’s fortunes eventually declined and it was plundered for its materials and sunk into ruin.

It was seized by Parliament in the 17th century but returned to Charles II upon the restoration of the monarchy in 1660 but the castle was never rebuilt and, with the exception of the chapel, it remained an abandoned ruin until taken into the care of the Office of Works in 1926 and became a scheduled monument and open (for free) to the public.

You can find Newbridge Park just behind the castle where this long-neglected woodland has been restored. There are mountain bike trails, picnic areas, miles of footpaths and lots of native trees to hug.

The North York Moors railway is situated almost across the road from the Castle. There is a parking lot and from Pickering, you can visit Whitby, Scarborough and take a journey on fabulous steam trains through the North York Moors from Whitby to Pickering.

The tickets for the steam train allow you to hop and take photos of some of the beautiful old heritage stations along the route and one in particular Goathland that was used in the Harry Potter films as a stop for the train carrying the students to school.

Just around the corner from the Pickering station, you will find the Beck Isle Museum which is located in a Grade II listed building. There are 27 themed rooms in the museum and an outdoor area that documents how life was in Yorkshire throughout the past.

You will find displays including a barber’s shop, blacksmith forge and a 160-year-old printing press that still works today. There are displays of photos detailing life in Pickering from the 1920s. You can explore period shops, from the Victorian age, including a printer’s workshop, grocers’ shop, gentleman’s outfitters, pub and chemist’s shop and the industrial heritage gallery detailing the past of the Rosedale ironstone mine and railway.

My first encounter with Pickering was when I discovered its weekly Monday market. The market runs down the main town street and has some brilliant stalls from Yorkshire cheese, to a fishmonger and some of my favourite pastry and pie stalls ever.

We had to make it a regular Monday outing to get curry pies and cheese straws when housesitting in the area.

There’s also the Pickering Hidden Market which is not so much a market as a covered building full in interesting little stalls containing pretty much every knick-knack ever made with lots of interesting antiques, bits and bobs.

Every October the community hosts a 1940’s themed WWII weekend. This is run by the North Yorkshire Moors Railway but is now so popular events have sprung up all over the town.

Dalby Forest is the perfect family-friendly outdoor destination! You can explore the forest on foot, bike or by swinging through the canopy on Go Ape Tree Top Adventure. In the Forest, you will find 13 walking trails, including easy access routes perfect for families.

With play areas, camping facilities and lots of exciting activities, there are 6 cycling trails to choose from and bike hire is available on site.

The Go Ape Dalby park is found on the southern slopes of the North York Moors National Park in the Vale of Pickering, with crossings, bridges and high ropes. There’s the Treetop Adventure, which is designed for anyone over 1 metre tall. For the bigger kids, there’s the Treetop Challenge with its hill-to-hill zip wires, twister crossings and Tarzan swings.

The Vale of Pickering has incredible views of the Great Yorkshire Forest, and you can zip around on a Forest Segway, or traverse with miles of lovely walking trails, right up to Staindale Lake.

Where to stay in Pickering

The White Swan is found on Market Street in the heart of Pickering. The White Swan Inn is a 16th-century coaching inn that has been transformed into a luxurious hotel and restaurant. The restaurant features traditional Yorkshire dishes, The White Swan Inn sources its ingredients from the local area, including rare-breed meat from the nearby Ginger Pig farm. A range of cooked breakfasts are available from kedgeree to a full English breakfast.

In the centre of Pickering village, the White Swan is at the edge of the North Yorkshire Moors, just 30 minutes’ drive from Scarborough and the sea. York city centre, including York Minster and the National Railway Museum, is a 45-minute drive away.

Things to do near Pickering Yorks

Rievaulx is one of the most famous of Yorkshire Abbeys. Rievaulx looms over this tiny village, whose population stands at around 100. The Abbey itself was closed and destroyed when Henry VIII dissolved the monasteries. The Earl of Rutland who carried on with the iron-smelting works that the monks had started purchased the grounds.

The Yorkshire Coast is a famous stretch of coast along the east coast of England. The North York Moors National Park runs 26 miles up the coastline and it includes historic fishing villages such as Robin Hood’s Bay, Runswick Bay and Staithes. The Yorkshire Coast makes for the perfect holiday or vacation when visiting England or if you are looking for the perfect staycation.

North Yorkshire all the best Things to do

Visiting North Yorkshire should be a must-do on everyone’s list. There are so many things to do in North Yorkshire it was a struggle to keep the list in control.  It was a pivotal location in British history and it contains some of England’s most evocative historic sites. There is a lot to love when visiting North Yorkshire not the least of which is its Viking history in York but as a central location to the War of the Roses and its incredible “Shambles” and Cathedral.

Market Towns and Villages in Yorkshire

The buzz and hustle in Yorkshire market towns and the hum of folks getting the freshest meats, veggies and cheeses from their local farmers are intoxicating. Not to mention the deliciousness of picking up hot and fresh Yorkshire pies and other delicacies. Villages in Yorkshire don’t hold a market every day but generally speaking each Market Town in Yorkshire hosts a market on specified days of the week. This allows the market vendors to take part in more than one market.

The famous Harry Potter train runs on the old steam train lines managed by the North Yorkshire Moors Railway. A ride on a steam train has always been a dream, but the chance to ride the Hogwarts Express Train to Hogsmeade is an opportunity not to be missed.

Whitby is a charming town, situated right on the coast it has a long maritime history and a distinct air of mystery thanks to the presence of the Whitby Abbey ruins looming over the town from the windswept heights of the headland.

I initially went to Whitby to explore the famous Abbey but soon learned that Whitby has a lot more to offer than just the Abbey. Since Whitby is a coastal town it has great beaches, a strong maritime history and so much more. I found over 27 things to do in Whitby that you can experience with or without kids.

Pickering makes an ideal place to stay and explore the North Yorkshire area check out some of the many Yorkshire Market Towns in the area. Visit Helmsley and see the ruined castle, visit the lavender fields, or head to Whitby and see where the Dracula legends began.

You can walk the Cleveland Way, check out the Shambles in York, visit York and explore the Viking history of the area. There are so many things to do in Pickering and the surrounding area you will find this the perfect place to relax and enjoy Yorkshire.