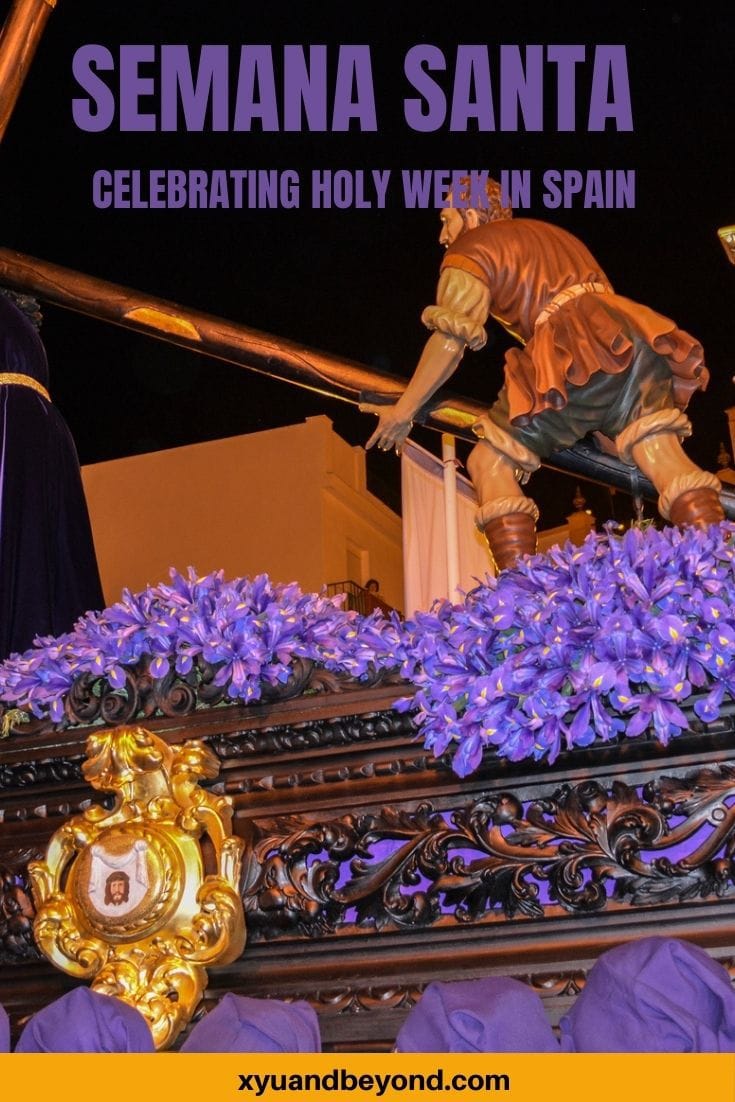 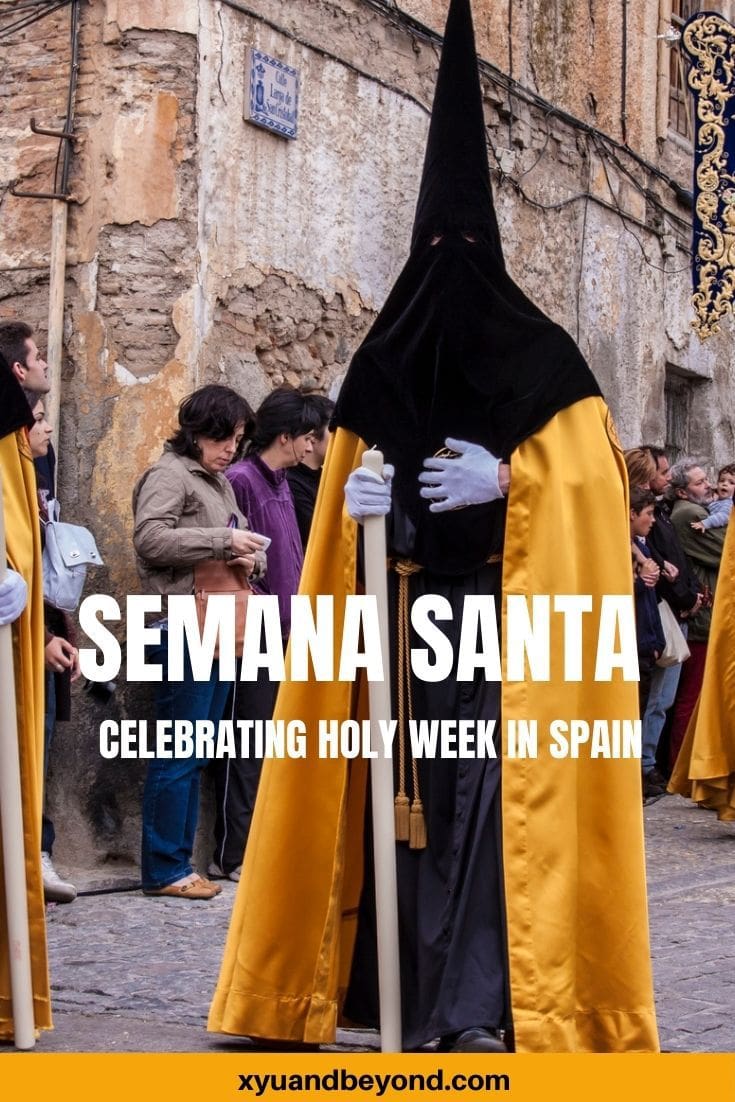 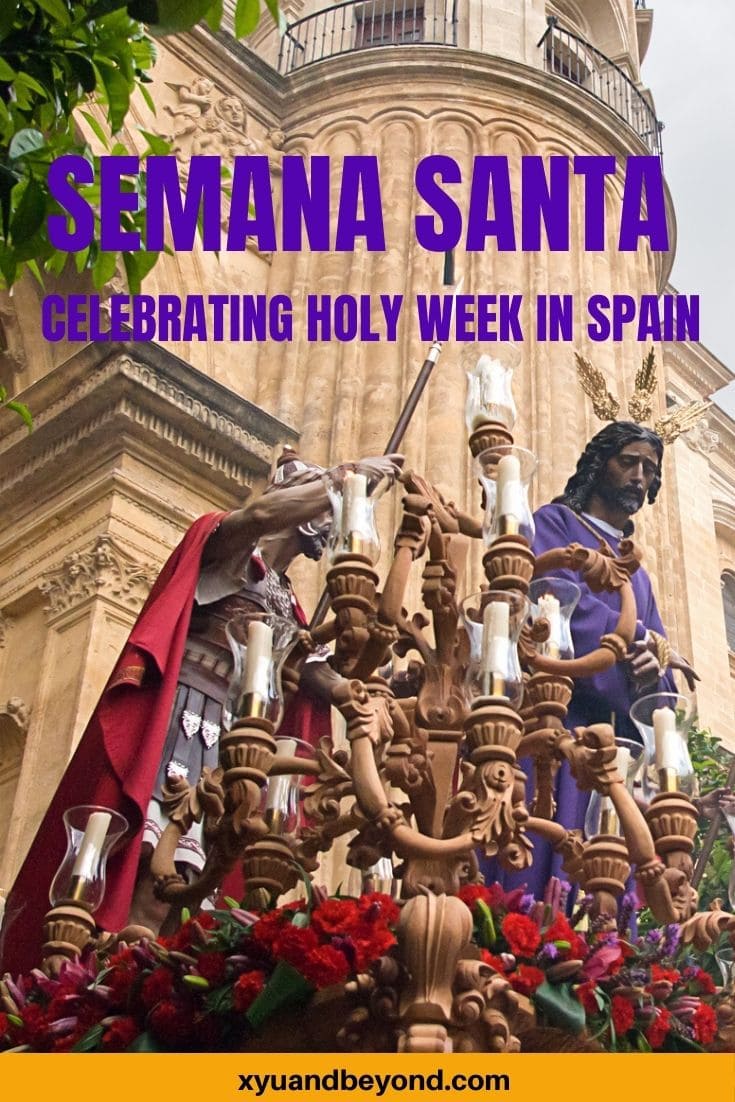 Semana Santa in spain is a truly joyous occasion anyone who knows me knows that I don’t do ‘religion’ or church of any description. However, I have to say being in Spain for Holy Week (Semana Santa) has been moving and inspiring. Celebrations in Spain often take place over days and weeks depending on the festival. What does Semana mean in English? The translation of Semana is week and Santa is holy.

Semana Santa is also called La Madruga, which is the night between Holy Thursday and Good Friday and it is the most important religious celebration in Spain, (Semana Santa in English is Holy Week).

History and traditions of Semana Santa in Spain

Semana Santa (Easter) in Spain dates back to the 16th century which is when the Catholic Church decided to make the story of the Passion of Christ one that the ordinary people could not only participate in but thoroughly understand and get involved in.

They decided to create scenes from the Passion that would be paraded through the streets of Spain for the benefit of everyone.  The Andalusian Semana starts on the Sunday before Easter and lasts until Easter Sunday itself, but in some areas of Spain Semana Santa lasts longer. These holy week processions carry on throughout the week.

The history of Salobreña dates back over 6000 years, with the Mediterranean sea in front of it and the Sierra Nevadas to the back, surrounded by sugar cane fields Salobreña has been a Spanish holiday village for many years.

Its Moorish castle was built in the 10th century, and its Mudejar 16th-century church, Iglesia de Nuestra Señora del Rosario is built on top of the old mosque. Roman ruins and archaeological finds turn up everywhere.

Salobreña is a village that is either uphill or downhill there is nothing in between until you get to the playa or beach. The Semana Santa processions must wind their way through some incredibly narrow streets as you can see from the photos. Often accompanied by a man with a metal pole to hold up the wires that might impede the passage of the ‘tronos’ as they pass by. The censers carried by the penitents waft sweet-scented smoke across the narrow streets and the air is full of the perfume of lilies.

What does Semana Santa stand for?

Semana Santa as it’s celebrated today was born in the 16th century. It was the idea of the Catholic Church, as a way of explaining the story of the Passion of Christ to non-religious folk. Throughout the week, parts of the story of the crucifixion and resurrection of Jesus are told through different processions.

What happens at Semana Santa?

Wikipedia says that – Holy Week in Spain is the annual tribute to the Passion of Jesus Christ celebrated by Catholic religious brotherhoods (Spanish: cofradía) and fraternities that perform penance processions on the streets of almost every Spanish city and town during the last week of Lent, the week immediately before Easter.

What happens during Semana Santa in Spain?

The main component of Semana Santa in Spain are the parades. Parades and Semana Santa processions in Spain vary from city to city, the basic parts are the same. Every day there are processions from the various brotherhoods (cofradias) in the city.

What is a cofradia?

These brotherhoods are known as cofradías and date back to the middle ages. They are always made up of men whose members take part in carrying the tronos (floats).

What are the nazarenos semana santa?

The “Nazarenos” are the members of the “cofradías” who participate in the processions. They are also known as the “penitentes” or penitent ones. You will see many of these local people wearing cone-shaped hats and robes during the parades.

Why do they wear cone-shaped hats for Semana Santa?

According to an article in Spanish at Wikipedia, the cone is supposed to symbolise a sort of rising towards the heavens and therefore this part of the Nazarenes’ dress is designed to bring their penitence closer to the heavens. These face and head coverings are called capirote.

How is Semana Santa Celebrated in Spain?

The parades take an average of 4 hours to traverse the hills and narrow streets of most towns and villages in Spain. Imagine carrying a ‘Trono’s weighing literally a few thousand kilos on your shoulders while marching for over 4 hours.

Often you will see members of the Cofradia wearing blindfolds while carrying the floats. These are used to signify that the person is making an extra sacrifice to carry the ‘Trono’ and ask God for special favours (but not for themselves).

In most Spanish Easter processions, participants carry large floats or pasos. Pasos generally have more than one figure depicted on them, for example, there are pasos with a full replica of the last supper. The ‘tronos’ tend to be thrones for one figure such as Christ or his Mother Mary.

The floats are festooned with flowers and candles and are the focal point of the procession. Many brotherhoods have owned and preserved their pasos for hundreds of years. These floats are decorated with hundreds of candles and masses of beautiful lilies. The air is perfumed with incense from the censers and the flowers decorating the ‘tronos’.

Procession of the Virgin of the Solitude

During Semana Santa, elaborate and sombre processions take place throughout the week culminating in the silent  Procession of the Virgin of the Solitude.

The tronos (throne or float) of the Virgin, depict the Mother of Christ in deep mourning with no fancy adornment or jewels. This procession is strictly for women, they carry the tronos and walk the streets in silence which is incredibly moving.

Before the Procession of the Virgin of the Solitude, there is the Procession of the Cofradía del Santo Sepulcro y Cofradia de Maria de Los Dolores y Cofradia San Juan Evangelista. These ‘brotherhoods’  or Cofradias (whose members take part in the processions) are a historic tradition in Spain, with many dating back to the Middle Ages. Semana Santa processions are also known as ‘penance processions’ and involve members of the brotherhood (nazarenos) parading from their church to the city’s cathedral.

What are the Capirote?

The citizens taking part in Semana Santa processions are called penitents and they dress in the traditional capirote which is a tall conical hat that is believed to bring the wearer closer to god (in no way shape or form related to the KKK usage in the USA).

The capirote traditionally covers the face and is worn with a robe and cape, usually in the colours of the Cofradia the penitents adhere to. Capirotes used to be reserved for people doing penance: as a sign of atoning for their sins, they would walk through the town wearing the hat, their faces covered so they could not be recognized as sinners.

Women often wear the mantilla, a black lace veil worn high on the back of the head.

Music is a hugely important part of Semana Santa processions – most are accompanied by live marching bands that play religious music, and there is also the ‘saeta’. You can learn more about the history and customs behind Semana Santa in Andalucia here.

The saeta is a very old traditional Spanish religious song. The Spanish word saeta has different meanings -“arrow“, “bud of a vine”, “hand of a clock” or “magnetic needle”. Since the 19th-century saetas include elements of flamenco. During the procession, a saetero usually sings from one of the balconies along the road.

What traditional foods are eaten during Semana Santa España

Semana Santa, like any other festival, has its own special flavours and this is especially during this week because traditionally Catholics are not supposed to eat meat.

What celebrations around the world have you been moved and inspired by?

8 Unique places to visit in Spain

Mojácar Spain: the perfect guide to this charming village

Tabernas desert a wild and barren landscape in Spain