We were housesitting in Almeria and had just moved from Salobrena up to Palomares near Mojacer in Andalucia when we heard about the Festival of Wine Horses. If you happen to be in Almeria Spain near the first week in May you must head to Caravaca de la Cruz in Murcia to attend the Festival of Wine Horses. This exhilarating festival is in honour of the Santísima y Vera Cruz de Caravaca.

We learnt of a bus trip to Caravaca for the Festival of Wine Horses and its celebration of the Vera Cruz or True Cross. Caravaca de la Cruz is the fifth holiest place in Catholic Christianity in the World, celebrating the Jubilee year every 7 years, the next being in 2024.

The Wine Horses festival is an ancient celebration of Christianity overcoming dark forces and has been celebrated in Caravaca de la Cruz for hundreds of years. You can purchase tickets for the main events which is the horse race to the castle.

How to get to Caravaca de la Cruz

To get to Caravaca from Murcia you can pick up a bus from the central bus station in Murcia, on Sierra de la Pila street 5, or it’s an easy drive from Murcia.

There are also many organized bus trips which you can see advertised in the local travel agents windows or tourist offices in Murcia.

Where to stay in Caravaca de la Cruz

We decided to stay in the hotel Nuestra Señora del Carmen which is a working monastery founded by Juan de la Cruz in the 16th century. The hotel is set around beautifully peaceful cloisters and is fully restored and renovated with air-conditioned rooms and en-suites.

What to see in Caravaca de la Cruz

Of course, the most obvious thing to do in Caravaca is to watch the Wine Horses Festival. This is the most Spanish of festivals I have ever seen. But Caravaca has plenty of other attractions and it truly is one of Spain’s hidden gems with very few tourists except on Festival days.

The town is very Spanish with few ex-pats and tourists which makes it a wonderful place to explore authentic Spanish cultures and architecture. Plenty of places for a beer and tapa and some exquisitely good restaurants to enjoy.

When exactly Caravaca de la Cruz Castle was built is unknown. Historians believe there was originally a Muslim castle here in the 12th century which was part of the Taifa of Murcia, an independent Muslim-ruled principality. In 1243 the castle was conquered by the Castilians under Alfonso X of Castile who donated it to Berenguer, 5th Baron of Entença.

Later the castle went to the Knights Templar who established a bailiwick here which also encompassed Cehegín and Bullas. The castle then had to defend the region against the nearby Emirate of Granada. It stayed in the Templar’s hands until 1312 when it went back into royal hands. In 1344 it was given to the Order of Santiago.

During the 17th century, the Caravaca de la Cruz Castle was slowly but surely transformed by the order from a military castle into a religious sanctuary. This is also when the Basilica de la Vera Cruz was built, which holds a relic of the true cross.

At the beginning of the 19th century, the castle was strengthened in fear of French troops. Later that century it was confiscated.

Little remains of the 15C castle. The ramparts dotted with 14 towers now protect the 17C church, home to a fragment of the “Holy Cross” that has been an object of devout worship since the 13C. The facade, adorned with a superb portal (1722), made of local red marble, is strikingly Baroque.

A simple museum that tells the story of the Wine Horses Festival and showcases the dramatically beautiful costumes and trappings that are made for the horses in the celebrations and races.

History of the Wine Horses in Caravaca de la Cruz

The Christian Reconquista was taking place in Spain at that time and a Christian missionary, Don Gínes Pérez Chirinos de Cuenca was captured by the Moors. The King was curious about the Christian faith and asked the missionary to tell him the story and demonstrate the Last Supper.

The True Cross of Caravaca

The missionary agreed and set up an altar draped with cloth and presented with wine, bread and candles. However, the most important element, the cross, was missing and he could not continue with his demonstration of the Eucharist without one. Suddenly the King asked “what is that” pointing to the window. Two angels had appeared carrying a cross which they placed on the altar and then disappeared.

The priest continued with the Mass. When he reached the consecration stage, the king saw a beautiful baby instead of the bread. The legends say that the king was so taken stunned by this miraculous vision that he, and his family, converted to Christianity and asked to be baptized into the Christian faith. Many believed that the cross delivered by the angels included a piece of the True Cross.

Due to this miracle, the Caravaca cross became a symbol of Christianity throughout Spain and the priests who sailed with Christopher Columbus took copies of the Caravaca cross with them. The design is still commonly seen in Central and South American churches and monasteries. Because of this miracle and the relic of the True Cross in 1998 Rome declared that Caravaca de la Cruz was to become the fifth holy town in Spain.

According to the legends during the 13th century, the villagers of Caravaca de la Cruz sought refuge in the Castle on the town’s hill. The Castle was the home of the Knights Templars who were protecting the area from the moors. The water supply had been contaminated with poison and they were forced to leave the castle to find fresh supplies. The Templars set out to find water but there was none so they loaded up their wineskins and raced back to the castle.

On the Templars return to the castle a miracle happened when the wine was blessed in the presence of the Cross of Caravaca and given to the people who had become ill through drinking the contaminated water, they recovered. The wine was then mixed with the tainted water and it became drinkable!

Do you know the difference between tapa and pinchos?

The Wine Horses Festival takes place on or around the first of May. On the first day, there is a parade of the horses down the main street of Caravaca and the horses are shown to their best without any adornment. This is known as the Caballos a Pelo or hair horses which simply means no mantles or fancy decorations.

Each horse belongs to a peña which is a group of villagers who join forces to celebrate the festival together and each peña is accompanied by its own brass band. There is much drinking, dancing and celebrating.

On the second day of the festival, the horses are magnificently decked out for the next days’ race. Magnificent mantles embroidered in silk and gold threads are decorated and prepared throughout the year just for this spectacle.

In the morning, the “peñas” parade again with their horses beautifully adorned with these wonderful decorations. There are bleachers set up for the crowds to sit and watch the parade. The parade takes about 4 hours to wind its way through the streets of Caravaca.

Each horse is accompanied by a brass band, singers and dancers who are obviously having a grand time. Most restaurants along the parade route and most shops are closed for the parade but you will find small bars open down the side streets to have some drinks and tapa.

The parade finishes with the Mayor in attendance and groups of “Christians and Moors” in costume marching along with the brass bands and the King and Queen of the parades.

After the parade, the race up the hill to the Castle is reenacted. Four young men have to run with the horses without releasing their hold on the horse or they are disqualified. There are prizes for not only the race winner but the most beautifully dressed horses as well.

The Festival includes a ceremony to bless the water used by Caravaca farmers. The festival has applied for international recognition from UNESCO.

The Festival normally takes place around the beginning of May and lasts for 5 days.

11:00 Flower Offering Parade including the Moors, Christians and the Wine Horses
16:00 Natural horses no decorations contest
21:00 Parade of the Music Bands
22:30 Singing of the traditional Hymn a Caravaca followed by Firework display

07:00 Diana during which the bells are rung and loud firecrackers are let off in the streets.
09:00 Mass in the cathedral where all of the Moors, Christians and Wine Horse congregate.
09:30 Parade of the Wine Horses and their Riders

12:00 Parade of the Moors and Christians followed by the Blessing of the Wine.

14:00 Running of the Wine Horses starts and continues until all 60 horses have raced from the town up to the Real Basílica-Santuario de la Vera Cruz.

20:30 Mock battle in the Cuesta del Castillo which the Moors win.
21:00 Parade of the Patron Saint and the Vera Cruz in which the Moors and Christians participate from the Real Basílica-Santuario to the Parroquia de El Salvador.

11:30 Grand Children’s Parade in which the Moors, Christians and Wine Horses participate
17:15 Solemn Procession during which the Verz Cruz is taken to the Cuesta de la Cruz followed by a magnificent Firework Display.

19:30 Grand Parade of the Moors and Christians

18:00 Final Procession to return the statue of Nuestra Stma. y Vera Cruz from the Parroquia de El Salvador to the Basilica-Santuario.

00:00 Spectacular Firework display to mark the end of the fiesta.

Have you made it to the Festival of Wine Horses? What did you think?

Pin it to keep it

How to hike the Camino de Santiago when retired
Read More

One Day In Barcelona Itinerary – Where to Eat, Sleep & Play
Read More 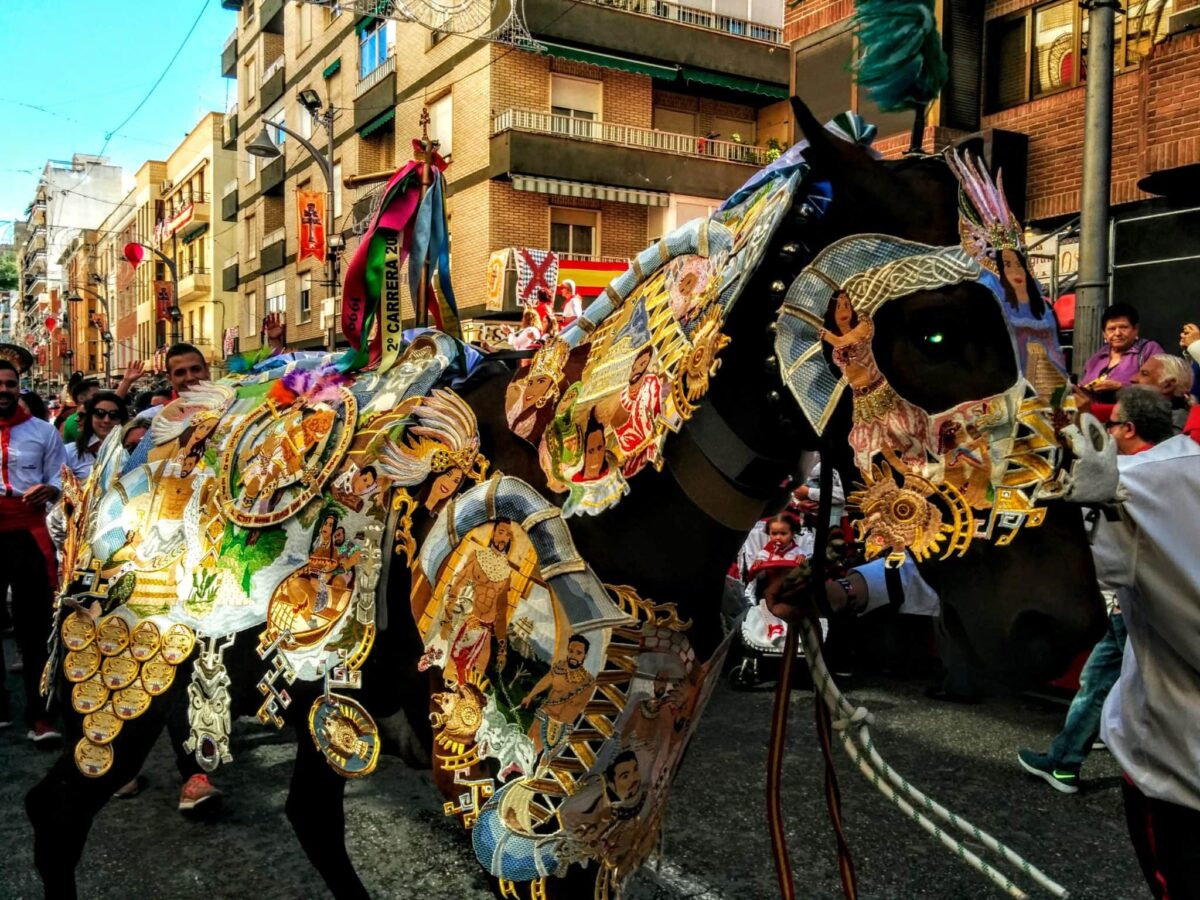