Visiting the House of the Virgin Mary in Ephesus Turkey 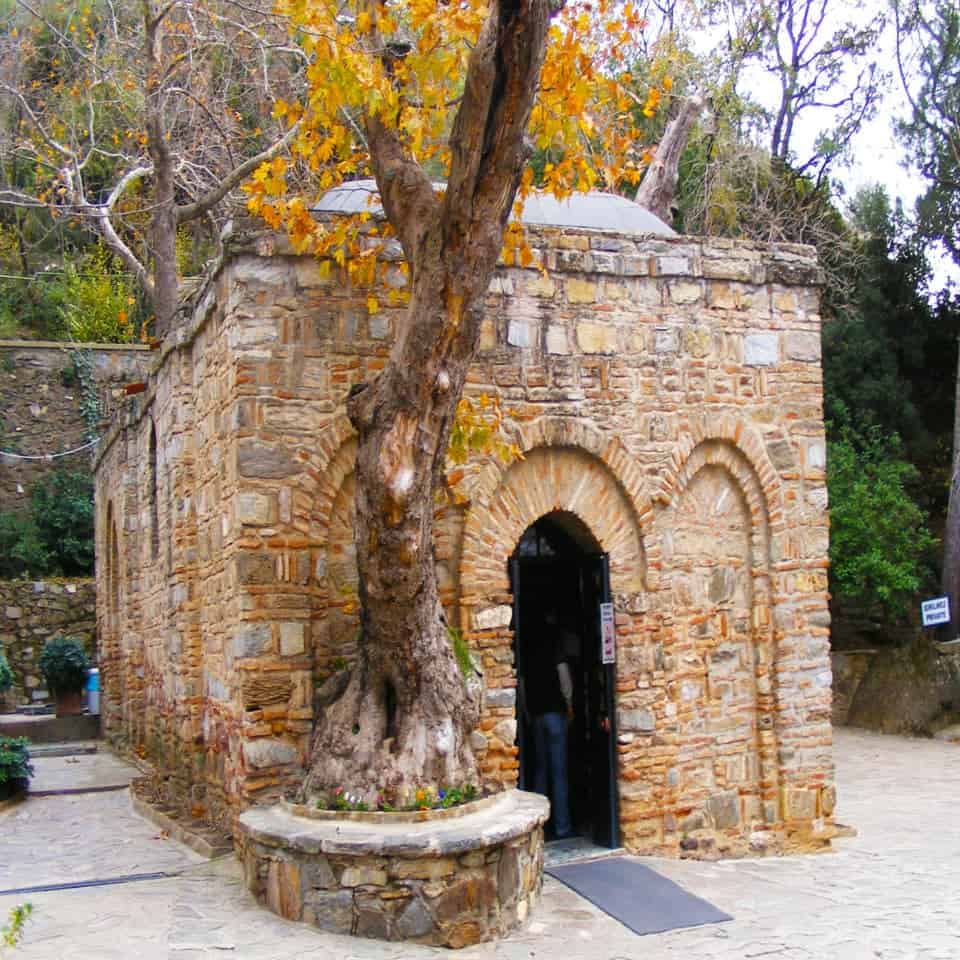 House of the Virgin Mary

We visited the House of the Virgin Mary in Ephesus after landing in Turkey on a cruise. We decided against booking a tour from the cruise ship and used several other sources to find local tour guides. These local tour guides were literally a tenth of the price of the cruise ship and they were superb. Whether it was in Ephesus, Egypt, Greece, Rome or Malta I would highly recommend doing this type of tour. 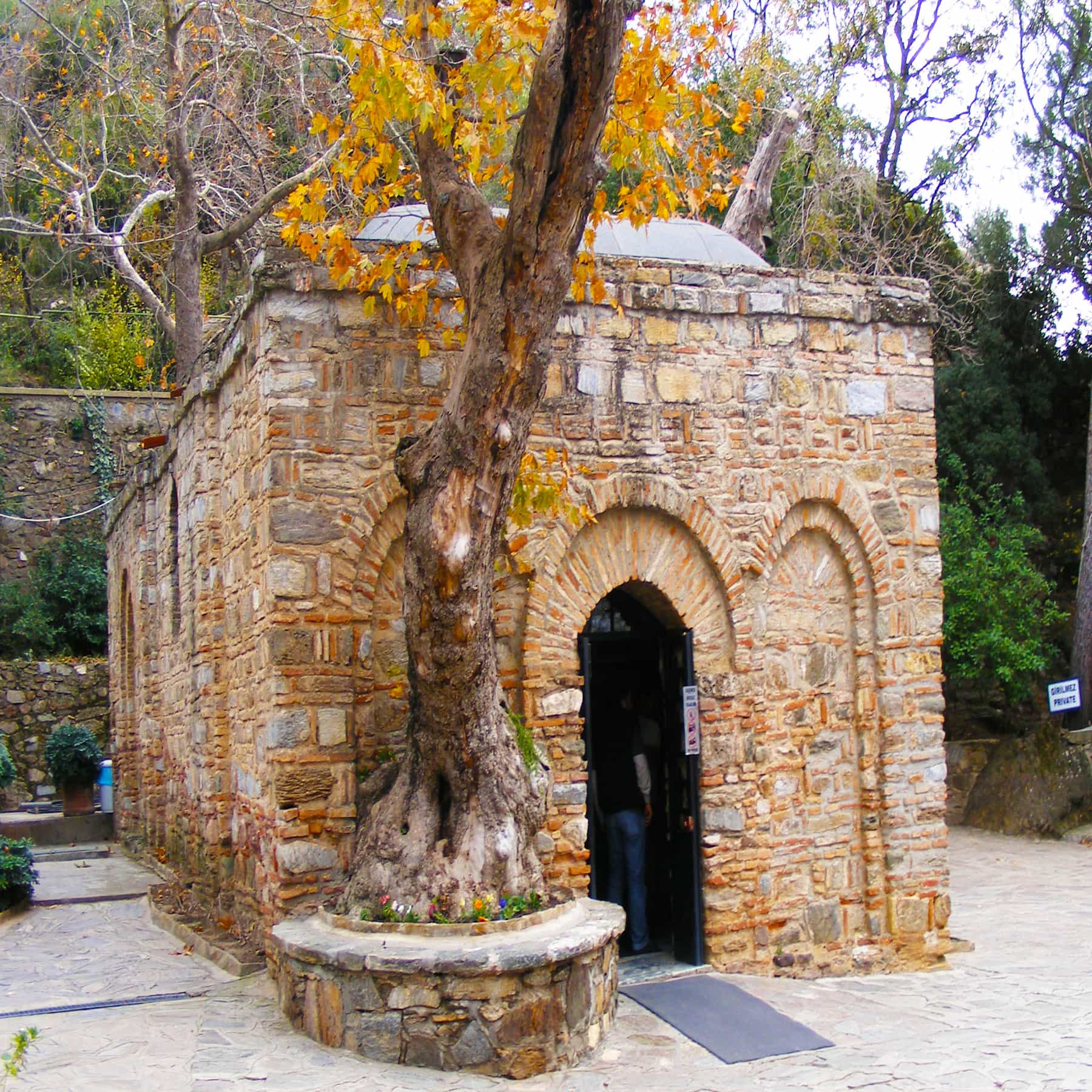 We used the Cruise Critic message boards to dig deep into the various ports we were going to visit and there were several recommendations for local tours which we took and were extremely pleased with.

Our cruise shipped docked at Selcuk in Turkey and from there we had arranged to be picked up by a local tour guide. The guide spoke perfect English and we were joined on the tour by 8 Americans. The tour was in a van with air conditioning and we were going to visit Ephesus, check out a silk carpet site, leather manufacturers, as well as see Ephesus and several other sites along the way to visit Mary’s House.

The House of the Virgin Mary is located on the top of  Mount Koressos near Ephesus in Turkey. A long winding beautiful drive up the mountains brings you to the site.

The house of the Virgin Mary is close to the ancient ruins of the city of Ephesus, yet despite the huge popularity of the latter, many people do not take the detour to visit the house where the Mother of God Mary is believed to have lived and died. The drive up the mountain is absolutely stunning and the site is beautifully peaceful and serene.

It would be an absolute shame if you are visiting in the region of Ephesus to miss this site.

The price of the Entrance Ticket is 25.00 TL for the foreigners and 10.00 TL for the Turkish citizens which works out to be around $2.50 US.

Although the Catholic Church has never confirmed this to be the place of her assumption, three popes have visited, and the Church takes responsibility for running the house through donations and funding. Discovered in the 19th century, the house was found using the descriptions from the Blessed Anne Catherine Emmerich who was a Catholic nun and visionary. 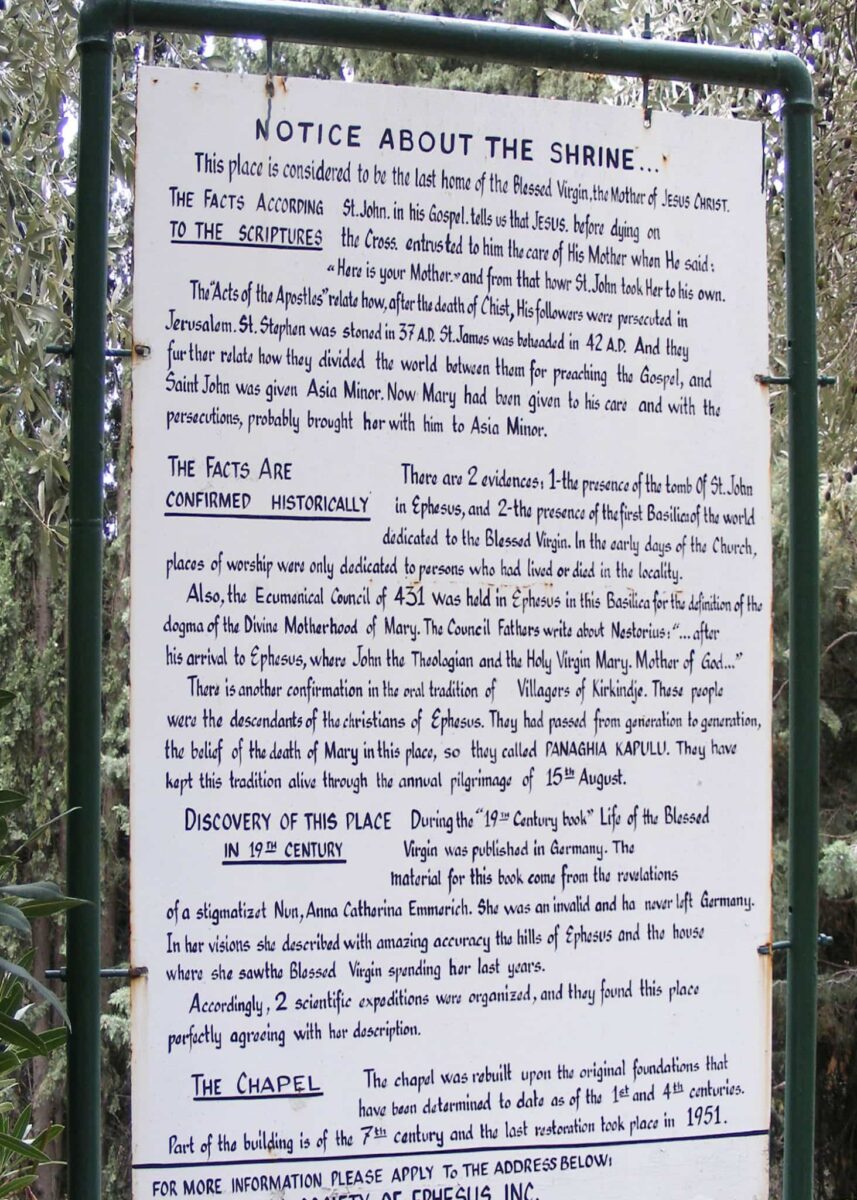 There has been a steady flow of pilgrims to the site for many years. Up high in the mountains, the area is particularly beautiful and immensely peaceful. If Mary did live here you can see why when you visit. You will also notice a lot of Turkish guards who the government places at the site to protect it. 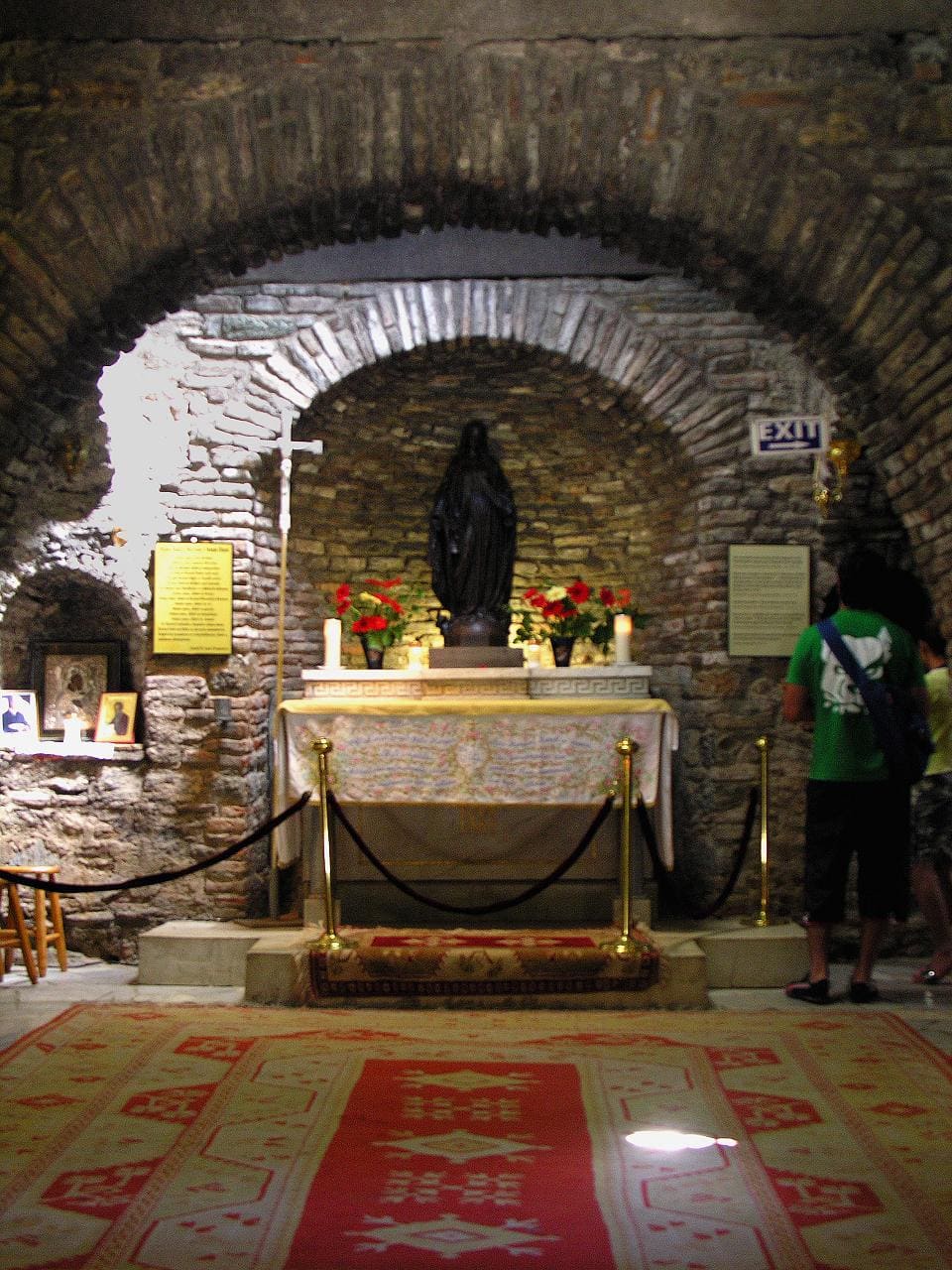 Surrounded by Cyprus trees and mountains the landscape of Turkey lies before you in incredible vistas. Apparently, Mary preferred this remote, peaceful area and was brought here by the Disciple John where she stayed until her Assumption into heaven.

The house of the Virgin Mary was made entirely of stones and dates back to the 4th Century AD.

The house is a two-story structure which contained an anteroom, bedroom and prayer room which is considered the Christian Church area. There is also a fireplace room which is used as a Muslim Chapel.

It is both a sacred place for Muslims and since Mary (Meryem Ana) is spoken of in the Quran Muslims come to visit as well as Christians. It does feel like a very spiritual place and will stay in your memory for a long time to come, whether you believe or not.

The property was restored in the 1940s after it had fallen into ruins.  These days only the central part of the house and a room to the right of the altar are open to pilgrims.  The house was declared the Shrine of the Virgin Mary by Pope John-Paul II in the 1980s.  Every year a pilgrimage and ceremony take 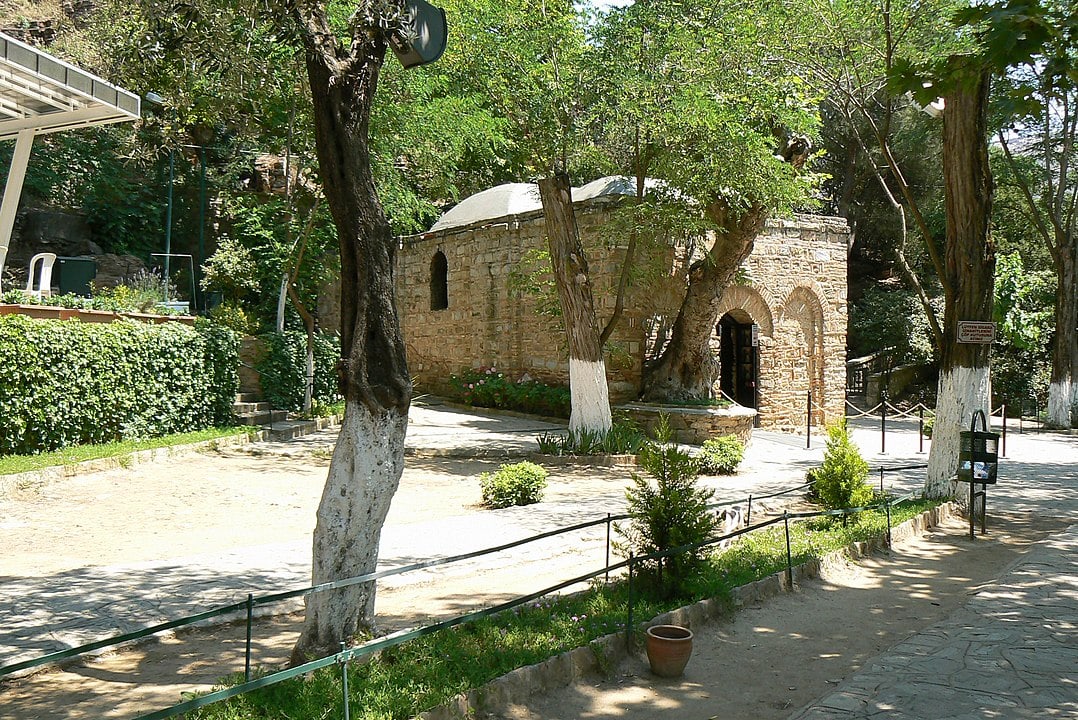 It is generally agreed by historians and religious experts that Saint John, Saint Paul and the Virgin Mary spent time living in the ancient city of Ephesus that these days is one of Turkey’s top visited attractions.

In the early 19th century, a nun named Anne Catherine Emmerich took to her bed where she had visions and dreams about the life of Christ and Mary. Many years after her death a priest read and followed her descriptions and as a result, discovered the final resting place of the Virgin Mary.

Anne the nun and the priest had never been to Ephesus and at that time, excavation work had not started so it was not as widely known as it is today, so was it coincidence or the divine truth? The priest believed he had found the house yet it took many years to convince others. These days as well as being a shrine, it is also a chapel and place of worship.

The House of the Virgin Mary

The parking lot leads up to the house and you will see a cafe, souvenir shops and then the first landmark is the baptism pool and a seating area for monthly services.

The House of the Virgin is very small and quite humble made from plain stones and bricks it feels almost anti-climatic.

The house itself has been restored as authentically as possible. The bottom section of the house is the original building and stones. There is a metal door that you walk through and you can pick up a candle before moving onto the main area where a statue of the Virgin Mary stands.

Naturally, as a place of worship, silence is expected and a conservative dress code is in place.

Outside you can visit the holy waters where there are 3 metal taps. You are encouraged to take a drink and make a wish. Local legends say that each tap represents an aspect of life – wealth, health and fertility. Of course, they are not labelled so if you believe you may be taking a chance.

Outside the shrine is the  “Water of Mary”, a wishing well of sorts which is believed to be the source of miracles.  Pilgrims tie there personal wishes and worries on paper or fabric in the hope that its miraculous powers will give them some comfort.  Pilgrims can also drink the water from the well as it is believed it can heal all ills.

The absolute best things to eat in Krakow Poland
What to eat and wher...
What is an Ireland Heritage Card & should I buy one?
What is an Irish Her...
Dublin Airport tips & tricks from a local
Welcome to Dublin Ai...
The Best of Copenhagen Denmark
Things to do i...
Share
Destinations  / Turkey 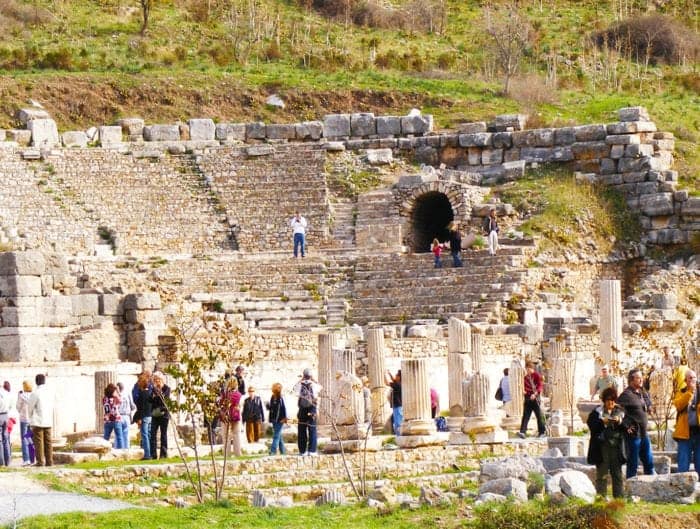 Visiting Ephesus the most awe-inspiring site in Turkey
November 1, 2019 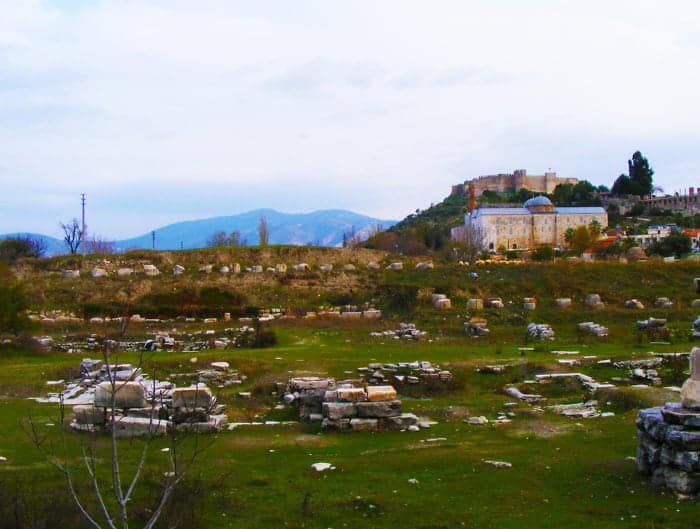 The Sacred Temple of Artemis Turkey Wonder of the Ancient World
August 9, 2019
© Copyright XYU and Beyond 2019 Exclusive member of Mediavine Travel