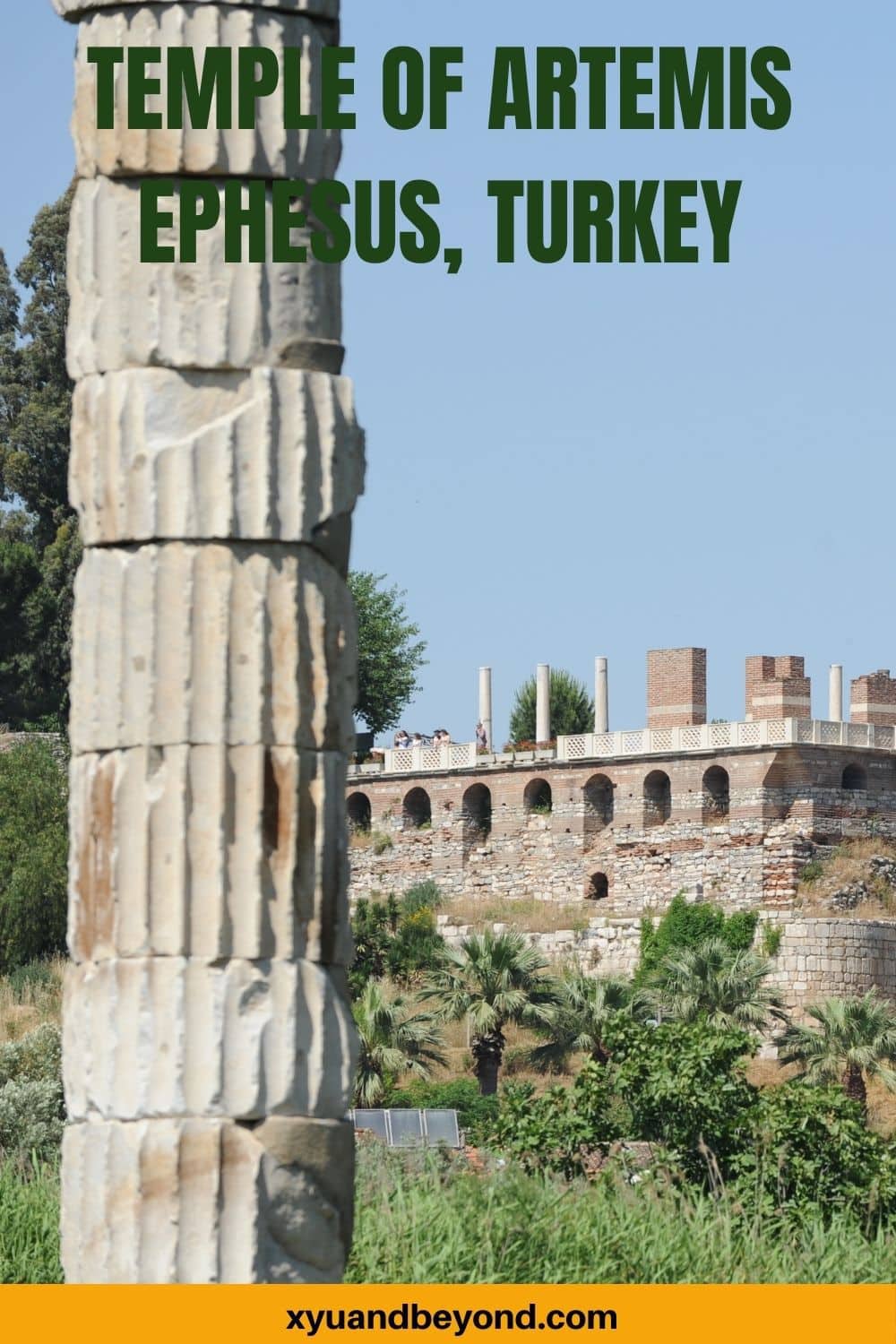 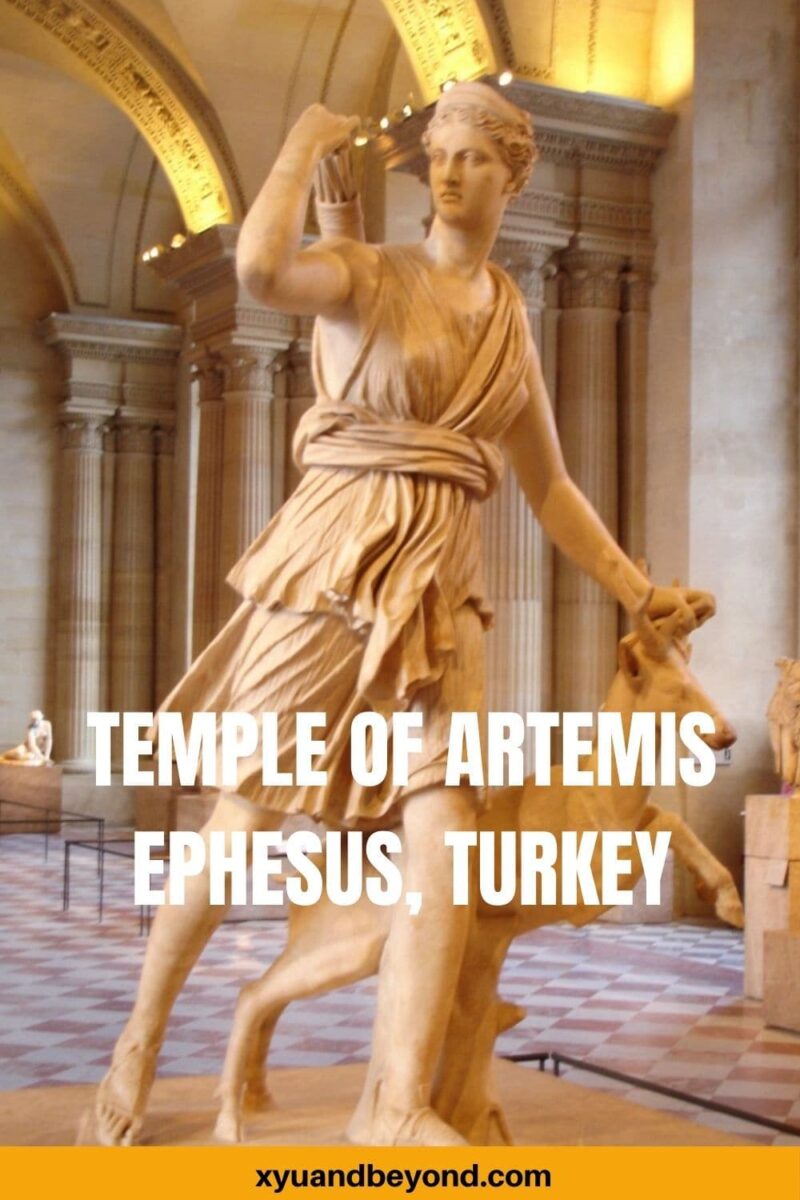 The Sacred Temple of Artemis in Ephesus

Visiting the Artemis Temple in Ephesus when travelling to Turkey is simply one of the things you should do on your visit. The Temple of Artemis was 4 times larger than the Parthenon and was described as the largest temple and place of worship for the Greek Goddess Artemis.

The Temple of Artemis also known as the Temple of Diana was a Greek temple dedicated to an ancient, local form of the goddess Artemis (associated with Diana, a Roman goddess). It was located in Ephesus.

It was completely rebuilt twice, once after a devastating flood and three hundred years later after an act of arson, and in its final form was one of the Seven Wonders of the Ancient World. By 401 AD it had been ruined or destroyed and only the foundations and fragments of the last temple can be seen today. today all you can see of the Temple of Diana is the ruins.

Facts about the Temple of Artemis

Who was the Goddess Diana of Ephesus?

The roman goddess Diana was also known to the Romans as Artemis. Diana was very important in Ephesus as her birthplace was thought to be Ortygia near Ephesus. Artemis was the goddess of chastity, hunting, wild animals, forests, childbirth, and fertility.

Are Artemis and Diana the same goddess?

Facts about the temple of Artemis.

The temple had 127 columns, each with a height of 60 feet.
The second time, the temple was burned to the ground was by Herostratus.
The Temple of Artemis may have been the first-ever building that was constructed of Marble.
The temple was rebuilt for the third time but destroyed again in 268 A.D.
It was used as a house of worship for Artemis and as well as a marketplace.
Remnants of the Temple of Artemis can be seen in the British Museum in London, England.

How long did the Temple of Artemis take to build??

What was inside the Temple of Artemis?

Inside the temple stood the statue of goddess Artemis made of cedar wood was standing. It is known that many famous sculptors, including Phidias and Polykleitos, were hired to decorate the temple.

Seven Wonders of the Ancient World: The Temple of Artemis at Ephesus

The Ephesus Temple of Diana (also known as Artemis) was a great temple that was built by Croesus, King of Lydia, around 550 BCE and was rebuilt after being burned down in 356 BCE. The Artemesium was famous not only for its great size, over 350 by 180 feet (about 110 by 55 metres) but also for the magnificent works of art that adorned it.

The temple was destroyed by invading Goths in 262 CE and was never rebuilt. Little remains of the temple and today only vendors and tourists visit the site. The site is free as not much remains but ruins but you will find several vendors there selling replicas of the stones and the Temple.

Artemis is almost always shown as a young and beautiful hunter carrying her bow and arrows. Statues to Artemis are usually depicted with animals like her hunting dogs or the animals she hunted. As the Moon goddess, she was also the representation of chastity and childbirth and the Romans identified her with Diana.

Artemis was the daughter of Zeus and Leto and was said to have helped her mother give birth to her twin brother Apollo. The village folk identified strongly with Artemis who was said to represent nature as she not only hunted game she also protected it.

The Temple had 127 Marble Columns. Like all the other Artemis temples it faced to the west. The Temple was designed and constructed in the 6th century BC. Early construction was built at the expense of  Croesus, the wealthy king of Lydia.

The temple became a pilgrimage site as Artemis’s shrine and has been visited by merchants, kings, and travellers. Many paid tribute to Artemis in the form of jewellery, food and various goods of value.

The temple was a widely respected place of refuge, a tradition that was linked in myth with the  Amazons who took refuge there, both from Heracles and Dionysus.

The temple was built in a marshy area which was chosen to prevent damage from future earthquakes.  The Cult of Artemis constructed the temple in 650BC on a site that was sacred to the Mother Goddess, Cybele.  The wonder and splendour of the temple attracted both pilgrims and worshippers from far and wide and the Cult of the Goddess was strengthened until it was said the night that Alexander the Great was born.  An arsonist who wanted to become immortal set fire to the temple but Artemis was busy with Alexander’s birth that she could not save her temple in time.

Twenty-two years later, during his sweep through Asia Minor, Alexander the Great offered to reconstruct the temple. In the famous refusal recorded by Strabo, the Ephesians said it would not be right for one god to build a temple for another god.

The Temple of Artemis was eventually rebuilt remaining true to the original concept but with the addition of a raised platform.  However, by 263 AD, the Temple was first plundered by Emperor Nero and then eventually destroyed by the Goths.  It was reconstructed again in the 4th century, only to be abandoned and stripped of its marble by the end of the century.

Discovery of the Temple of Artemis

The site of the Temple of Artemis was discovered in 1869 on an expedition sponsored by the British Museum, and several artefacts and sculptures from the reconstructed temple can be seen in the museum today. Standing tall in the marsh is the one surviving column which suggests the grandeur of the original temple.  According to Pliny 127 columns similar to the one remaining made up the Temple, each one was over 60 feet in height and many were decoratively carved.

The Temple of Artemis was once known as one of the 7 Wonders of the World. It was in 1863 the British Museum sent John Turtle Wood, an architect, to search for the temple of Artemis, but the problem was that he didn’t know where to look and ended up looking for it for six years. During each of those six years the British Museum threatened to cut off his funding but each year he managed to convince them to keep the money flowing.

Eventually Wood stumbled on a swamp that was believed to be the location of the Temple of Artemis. He excavated the entire area finding the remains of the foundation and some sculptured portions which were then shipped to the British Museum where they remain to this today.

The Temple of Artemis was adorned by many fine sculptures and statues.  The inside was gilded and painted and according to legend many of the sculptures were tributes to the Amazons who were said to have founded Ephesus. Unfortunately, all that remains is a single column and some rubble on the ground. Some of the stone is believed to have been used for the nearby mosque and most of the archaeological remains have been removed to the British Museum.

It is known that the first Ephesus settlement was built around the Temple of Artemis, which was destroyed by an earthquake. After the quake, the people built a new temple more imposing than the last with the support of the Roman empire.

The Temple of Artemis was located near the ancient city of Ephesus, about 50 km south of the port city of Izmir, in Turkey. It was completely rebuilt three times before its eventual destruction and the temple in its last version was finally destroyed by a mob in 401. Only the foundations and sculptural fragments of the last of the temples at the site remain.

Make sure when you visit Turkey you try out some of the traditional foods that have been enjoyed for centuries.

It’s going to be an interesting 10 years in Turkey if the excavations of the Temple of Artemis are carried out. I for one will be back to view this ancient wonder over the next few years.

Visiting Ephesus the most awe-inspiring site in Turkey

Visiting the House of the Virgin Mary in Ephesus Turkey

My Move to Europe – 23 personal stories

Things to do in Cappadocia in Winter