Boa Island and the mystery of the Caldragh Janus Head 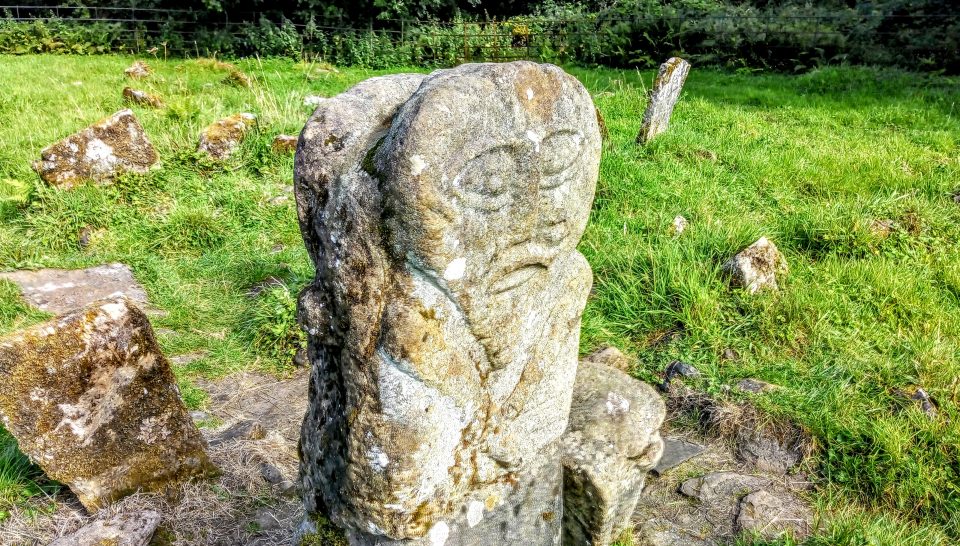 Boa Island is located in Lower Lough Erne which is in Fermanagh. Lough Erne is located in the north-west corner of Ireland. The Lough is made up of 2 large lakes with Enniskillen sitting on an island which separates the upper and a lower lough that runs into the sea in Donegal through Ballyshannon. Within the lake are several beautiful and mysterious islands including Boa Island,  Lusty Beg, Lusty More, Devenish and White Island. 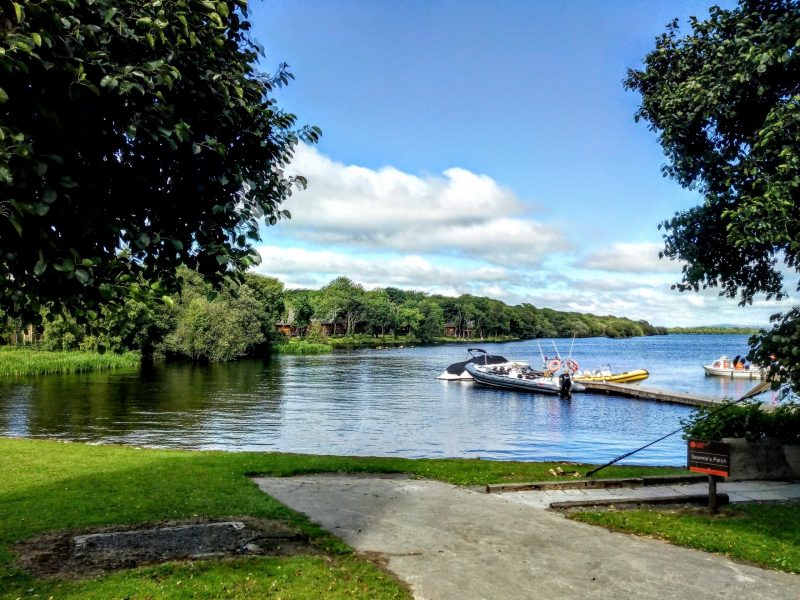 The Janus Stone on Boa Island predates Christianity and it is believed that it goes far back in time to pagan Ireland. The stone itself is over 2000 years old and is one of the most famous carved stones in Ireland today.

To find the Janus Stone which is located on Boa Island Road you can take the A32 North from Fermanagh Town until you reach the B82 which takes you onto Boa Island. The Cemetary at Caldragh is signposted on the left about 2 km down. Watch carefully the sign is very small and you will probably miss it the first time. You will need to rent a car to see this mysterious Island as no tour buses go there.

You will find a map on Google. 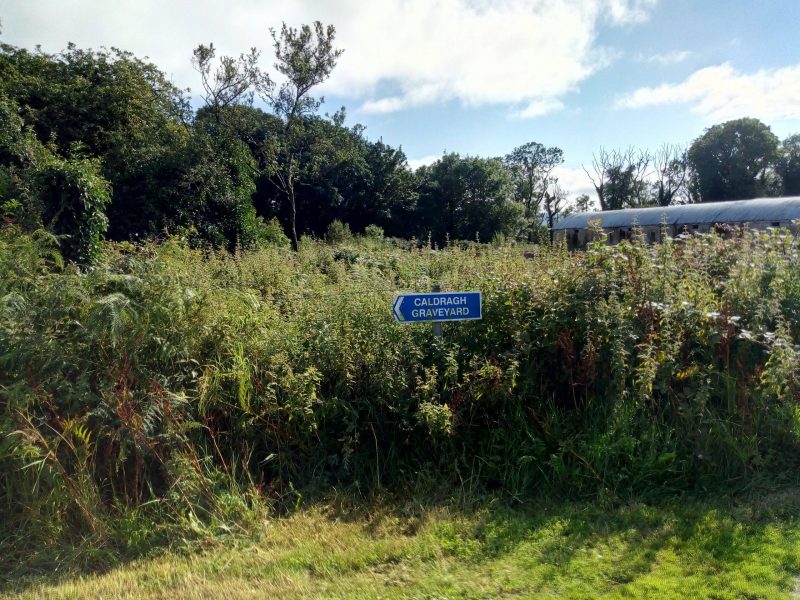 You will drive down what appears to be a farmer’s tractor lane with crops on either side, follow the road to the end where you will see a small parking lot on the left-hand side and a cow gate. The cow gate has a small sign telling you that you are at Caldragh Cemetary. 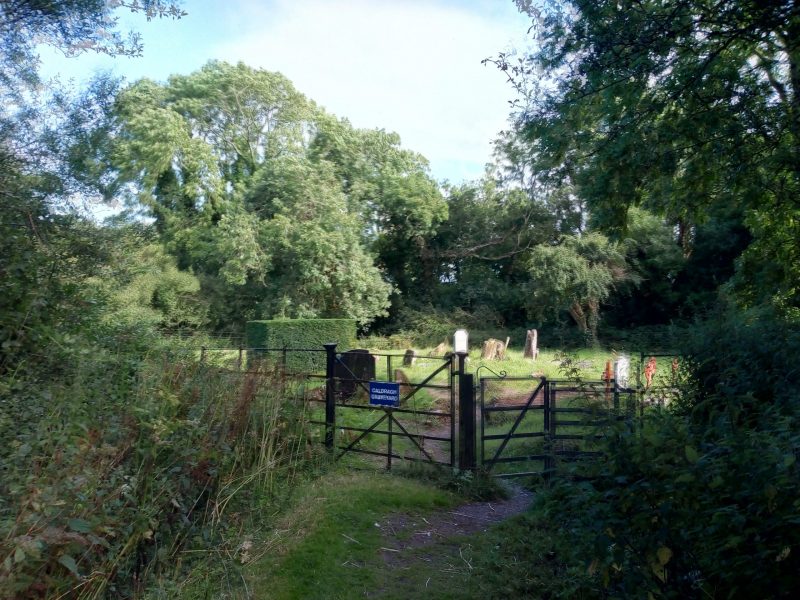 Held within the mysterious Caldragh Cemetery, which is said to be one of the “thin places”, stands the two curious figures that have caused scholars to scratch their heads for many years. As you enter the graveyard you will spot the Janus head slightly to the left. 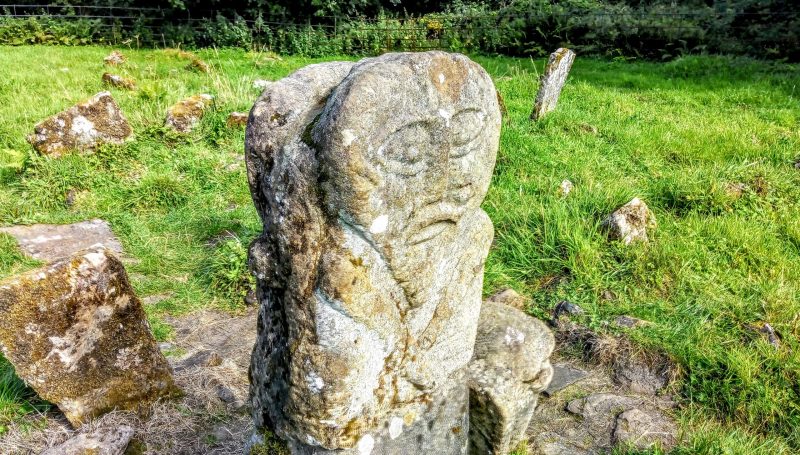 Boa Island is believed to be named after Badhbh, Caillech Bhéarra the Celtic goddess of war. Badhbh was known to shapeshift and take the form of a crow, who was seen upon the shoulder of, Cúchulainn after he died in battle.  At other times she is pictured as a wolf.

She is one of three Celtic war goddesses that included her sisters, Macha and Morrigan. Their mother was the goddess, Ernmass who was said to be one of the Tuatha Dé Danann. 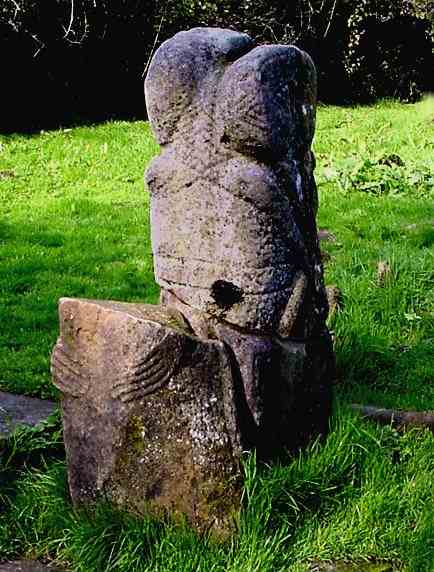 The biggest statue is called a Janus figure, which essentially means two-faced or two figures back to back. The east side of the figure is carved with a penis and is considered the male side and the west face is called the female side. 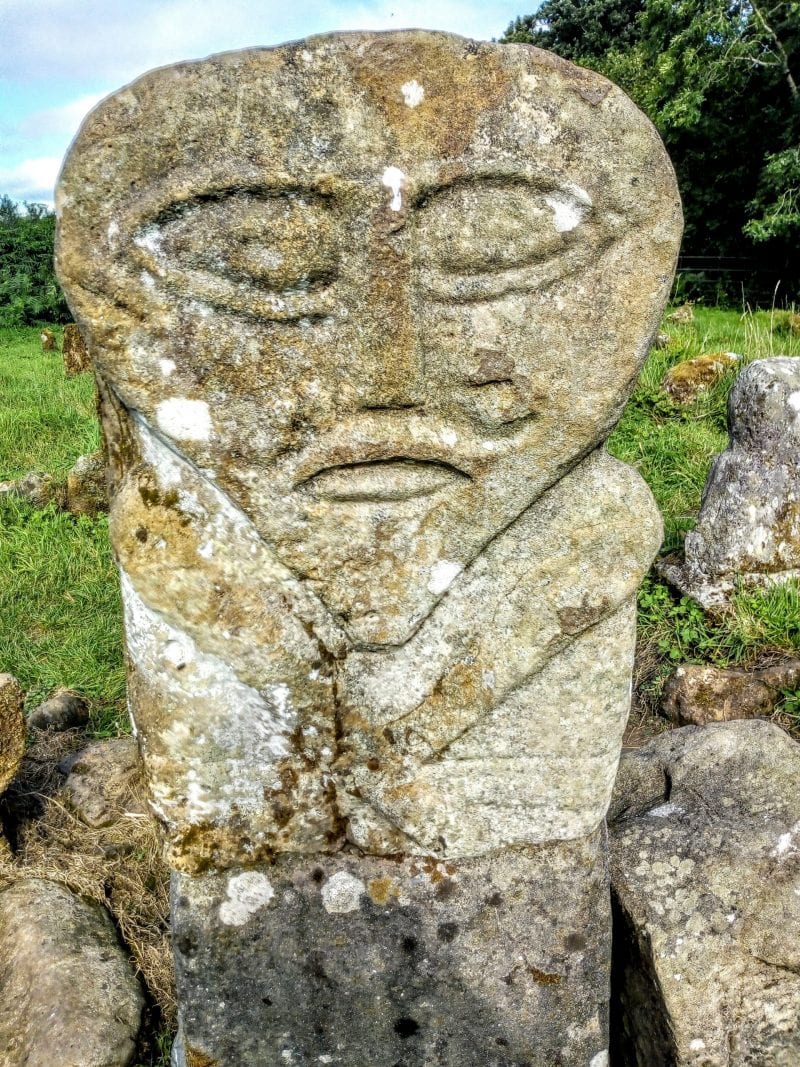 There is a sort of carved trough that separates the two heads that appears to be carved with zigzags and these days folks leave offerings to the gods in the space. Some theories suggest that the space was used for holding antlers or perhaps hair that joined the two together. Was it for certain is that the figure has nothing to do with the Roman God Janus. 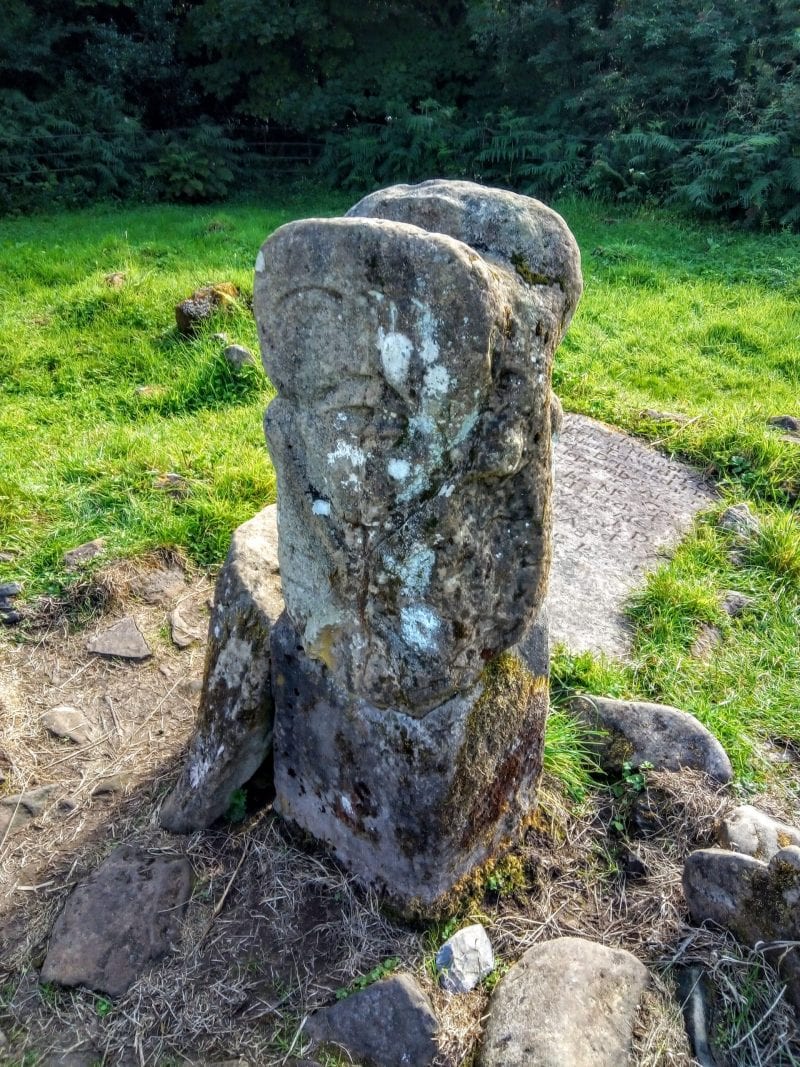 The east side of the statue faces the sunrise and some have said that it appears to be speaking. It has arms crossed over his chest in an almost Egyptian pose.

In 2003 a plinth or a base was found on Lusty More and brought to Boa island. This plinth is thought to be the original base of the figures. You can just see on the fragment the ends of the arms of the female side of the double-figure or Janus statue. 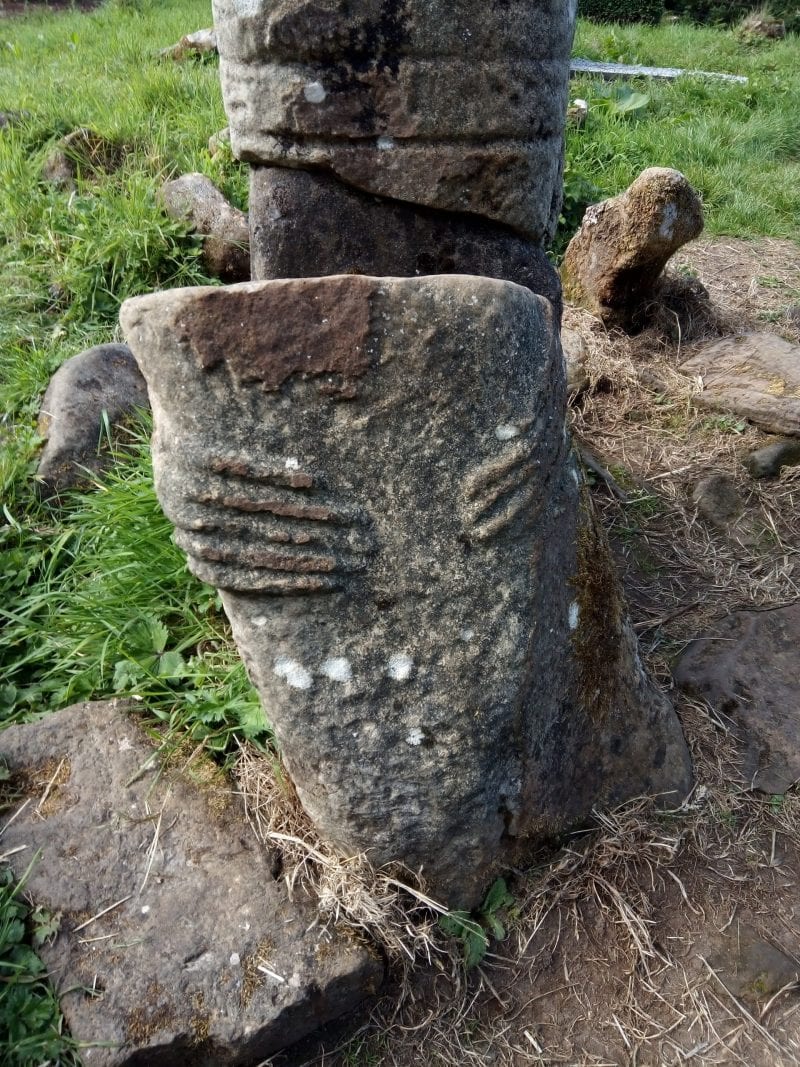 The smaller figure is known as “the Lustyman” because it was found on the nearby island Lusty More was moved to the cemetery in 1939, but it may well be a female figure. It is this smaller figure that appears to have only one eye fully carved that has allowed historians to develop the theory that it represents the “divine hag” or Boa and like the sky-god Odin of the Norse was blind in the left eye. 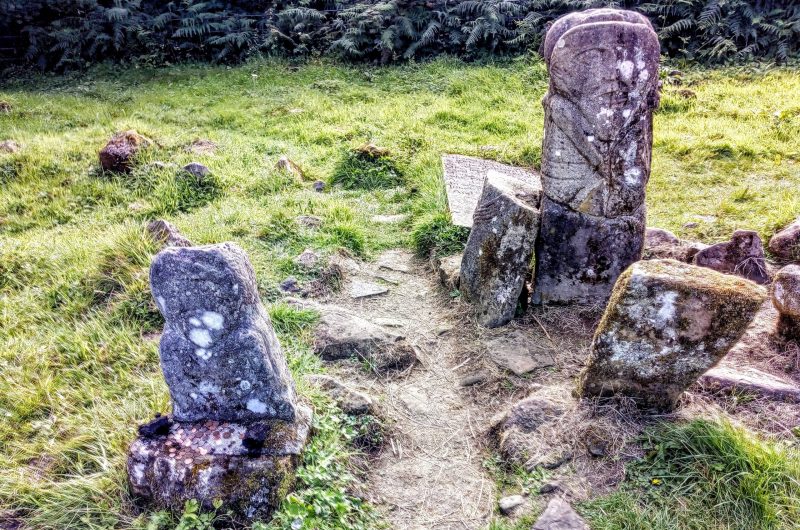 The figure appears to be holding something but it is not clear what it might be. It is believed that this statue and the “female” side of the Janus statue have their tongues sticking out which is believed to be a symbol of divinity and also associated with Odin. However, in medieval times it became a symbol of lust.

At one point in time, the figures were protected by awnings but over time the weathering has become worse. Both figures are described as Celtic Idols. e Irishmegaliths.org.uk 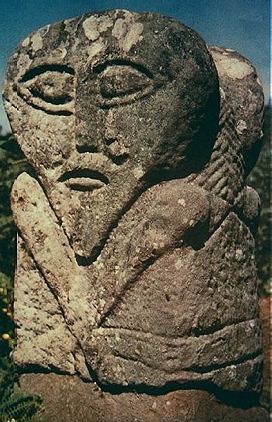 The Nobel Prize-winning poet Seamus Heaney celebrated the Boa Island figure’s similarity to the Roman deity Janus in his poem “January God” which gave it the name the Janus Stone.

Then I found a two faced stone

In the wet gap of the year,

I faltered near his power —-

Who broke the water, the hymen

With his great antlers —-

There reigned upon each ghost tine

The mothering earth, the stones

Taken by each wave,

The fleshy aftergrass, the bones

Subsoil in each grave.

Have you visited Boa Island? What mysterious things have you seen around Ireland?

If you want to see more articles on Ireland simply click a circle on the map below and it will take you to a new story.

Pin it to save it.