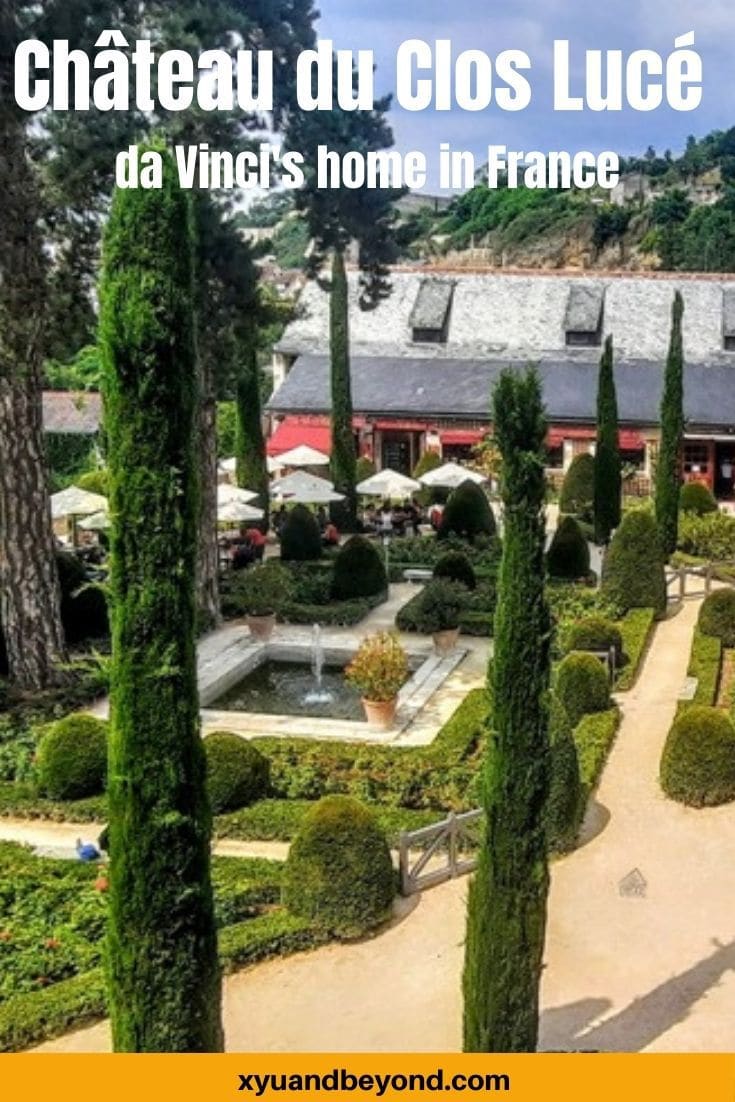 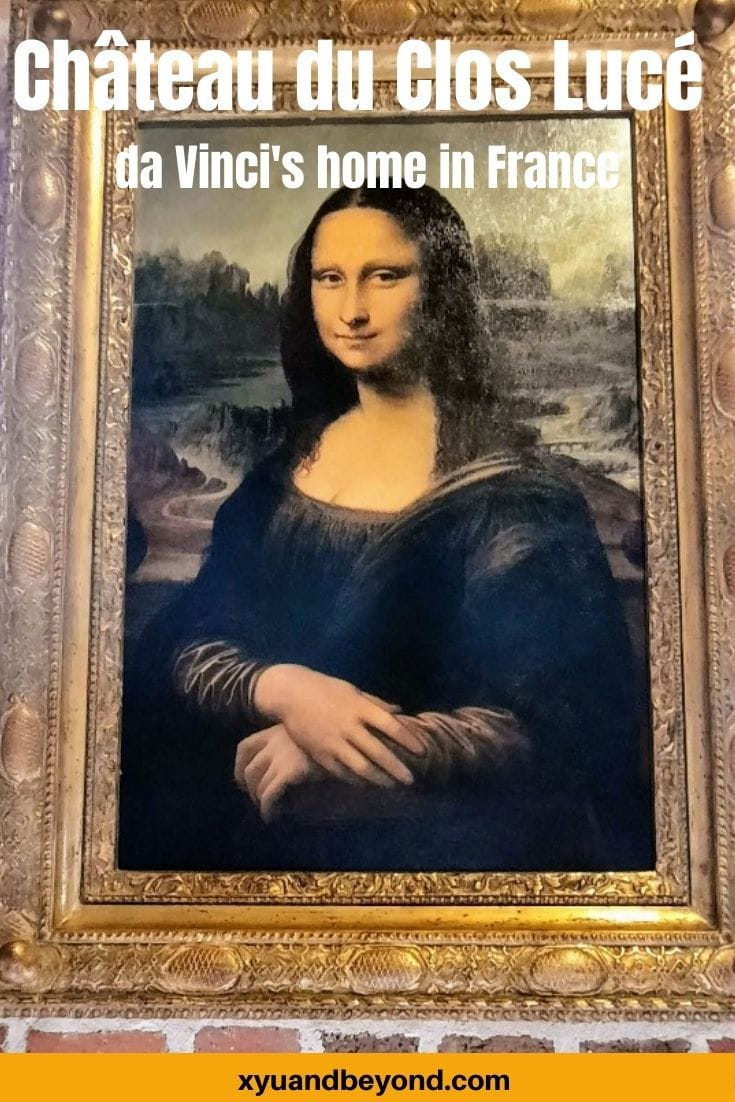 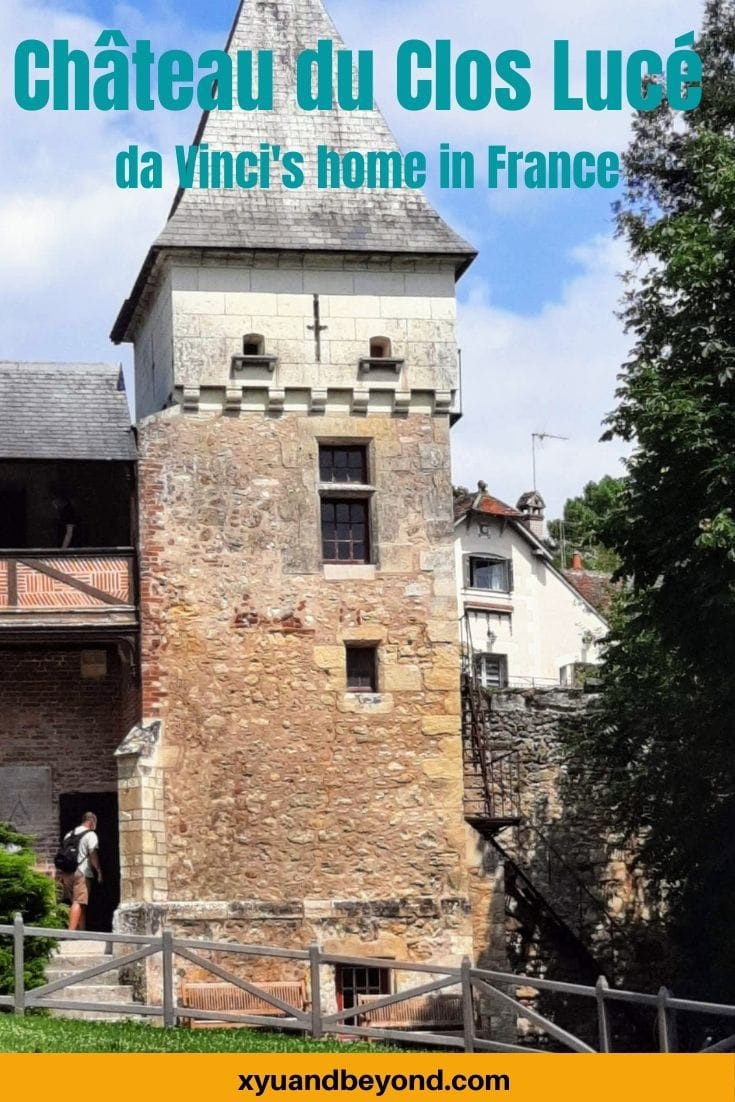 One of the must-see places in the town of Amboise in the Loire Valley is the Chateau Clos Lucé. This is the Leonardo da Vinci chateau and where he spent the last years of his life.

Since we were in the Loire Valley we obviously has to go and see other Chateaux including Chenonceau, Chambord, Blois and obviously the Chateau Amboise. There are over 300 chateaux to visit in the Val de Loire so it would really take deep pockets and a lot of time to visit them all but dammit I’m gonna give it a try.

What is the Loire Valley?

The area of the Loire Valley is a UNESCO World Heritage area that is comprised of around 800 square kilometres (310 sq mi). It is called “the Garden of France” as there is a profusion of fruit farms magnificent vineyards and oceans of artichoke, and asparagus fields, not to mention the spectacular sunflower fields which line the banks of the Loire River.

The enchanting Loire region dazzles with over 300 fairy-tale chateaux, exceptional gardens, medieval villages and towns, and of course extraordinary wines. Considered one of THE places to visit in France this region is simply unforgettable.

As you can see from the map the Loire Valley sits in Central France bordering Normandy where you can see Bayeux, the Normandy beaches and the Pays de la Loire where we are housesitting. If you are lucky enough to explore the area you should take time to wander gorgeous little villages like Dinan, head into Brittany and try some fabulous food, and explore the castle where William the Conqueror was born. If you are an Escape to the Chateau fan you can even book a foodies weekend with Dick and Angel at the Chateau de la Motte Husson.

Château de Cloux known now as the Château du Clos Lucé or simply Clos Lucé was built in 1474 by the bailiff of King Louis XI on foundations dating back to the 12th century.

Tourism offices love to say the walk from the town centre of Amboise is a few steps but it’s really not. The walk includes quite an uphill climb which if you are older or mobility challenged doesn’t make it very easy. When they say 5 minutes I figured close to 20 with my walking issues.

How much do the Chateau Du Clos Luce tickets cost? The price of the ticket is €18. You can check other rates and opening hours on the Official Page of the Castle.

Why was the Clos Luce built? It was built for King Charles VIII for his wife, Queen Anne de Bretagne, who visited the house and Chapel to mourn the loss of her young children. The chapel is decorated with four frescos, including the Annunciation, which was painted by Leonardo’s pupils.

Can I buy Chateau Du Clos Luce tickets online? Yes, you can buy tickets via skip the line on Get Your Guide which is what we did so we did get to skip a huge line outside the house.

What are Château du Clos Lucé hours of operation? The castle and the park are open all year round (except on 25th December and 1st January)

The Chateau de Cloux which is known by the name Clos Luce was built in 1471 on foundations dating back to the 12th century. From an architectural point of view, the chateau is mainly 15th century although the watchtower is the last surviving piece of medieval architecture.

King Charles VIII bought the castle in 1490 and for over 200 years it was the royal summer residence of the Kings of France.

It was Francis I who owned the castle in 1516 and invited da Vinci to France to settle at Clos Luce.

The Chateau survived the French Revolution because Amboise Family who owned it at that time were sympathetic to the cause — and convinced the revolutionaries that Leonardo was on their side.

The Saint-Bris family, are the final owners of the property. ”It has been our family tradition to maintain the spirit of Leonardo here, not only to make the house as it was in his time, but also to make it a chateau for the future,” says Countess Agnes Saint-Bris, whose family has owned the house since the French Revolution, and whose late husband, Hubert, began the restoration three decades ago., Today the Saint-Bris family has restored four large rooms and the basement to their Renaissance glory.

Clos Luce is set in the valley of the Amasse River, which is a tributary of the Loire. The chateau is surrounded by a stunning green park which know contain reproductions of his work including bridges, paintings, and art exhibits.

We had luckily purchased our skip-the-line tickets from Get Your Guide and were quite happy not to have to wait in line with the crowds that were gathering. Our Pass Sanitaire was scanned and we entered the Watch Tower where the tour began.

The Watchtower has a narrow spiral staircase going up and leads into the open-air gallery where you can see some stunning views of the gardens. From here you find yourself in the great artist’s bedroom.  This is where Da Vinci spent the last 3 years of his life

The first thing you spot entering the room is a stunning carved  Renaissance bed and then the French coat of arms decorating the fireplace. They say that Leonardo adored the view from his room and his sketch of the gardens is now hanging in the Windsor Castle collection.

There is an Aubusson tapestry on the wall and several paintings created by da Vinci’s pupils.

Marguerite de Navarre, who was the sister of King Francis I lived at Clos Luce with her brother and their mother Louise de Savoie and they spent many happy childhood years here.

The Oratory of Anne de Bretagne

From the upper floor, you now descend to the ground floor where you will see the Chapel, or Oratory that was built for Anne of Brittany, wife of King Charles VIII.  The chapel is where Anne of Brittany wept ”the saddest tears a woman can shed” over the death of her 3-year old son.

The ceiling is a stunning blue with stars and there are several frescoes painted by (it is believed) Da Vinci and his pupils. The three frescoes are a richly coloured Assumption, an Annunciation that strongly resembles Leonardo’s Annunciation in the Louvre, and a Virgin with infant Jesus over the chapel entry. The pupils included Francesco Melzi who was da Vinci’s heir.

In these workshops, da Vinci worked tirelessly on his royal commissions and his engineering experiments. This is where he finished his three masterpieces; The Mona Lisa, The Virgin and Child with Saint Anne and St. John the Baptist.

There are three areas to the workshop the Painter’s Workshop where you will see the colours being prepared for his work, and designs for his double helix staircase at Chambord along with his sketches and models. There is also a library and cabinet of curiosities.

The large Renaissance Room served as a reception room for Leonardo da Vinci and this is where he would entertain his royal guests and the artists who came to visit him.

The walls are decorated with Flemish and Tournai tapestries and all the furniture date from the Renaissance period.

I’ll bet you didn’t know that da Vinci was a vegetarian, did you? Well, it was true and his cook at Clos Luce – Mathurine ruled this domain. Da Vinci was not what you would call a foodie now his belief was that of ‘do not eat unless you feel inclined.

This was absolutely fascinating down the stairs you are introduced to da Vinci the inventor and engineer. There are four rooms full of machines and models created from his original drawings.

You will see his inventions including a tank, paddle boat, flying machines, wind-up cars, gear systems, extending ladders, and water pumps a parachute and much more.

Did you spot the entrance to the secret underground passage? According to legend, this passage led to the Royal Chateau of Amboise where da Vinci would meet with King Francis I.

Upon exiting the Chateau and you need a break you can stop by the Gift Shop and the Renaissance Terrasse Creperie tearoom for a rest. Continue your tour through the extensive Renaissance Gardens.

You will find larger models of Da Vinci’s inventions including a double-decker bridge, Leonardo’s garden, helicopter, tank and 16 other giant working models.

There is always an exhibit of da Vinci’s paintings on giant translucent canvases and you can hear the gentle gurgling of the river and listen to soft Renaissance music piped all throughout the park.

You may spot La Table du Moulin which is a snack bar near the water mill, or perhaps you want a gourmet French meal with recipes dating back to the Renaissance. The L’Auberge du Prieure uses all produce grown in Da Vinci’s gardens and the recipes may well have been some of Leonardo’s favourites.

You will find da Vinci’s grave at the Chapel of Saint Hubert within the grounds of the Chateau Amboise.

Amboise, France, is located in the Loire Valley just 20 minutes from Tours by train and about 225 km (140 miles) from Paris. It overlooks the River Loire between Tours and Blois.

How to get to Amboise

From Paris, you can take the train at Gare d’Austerlitz to Gare d’Amboise.  From here I suggest a taxi to your hotel.

The TGV bullet trains take under 2 hours to Amboise and there are many cheap flights out of Tours or Orlean to England and Paris.

There are trains during the day from Tours to Amboise practically every hour travel time is about 20 minutes.

Driving to Amboise: Many people find renting a car is the best way to explore the Loire Valley chateaux. If you’re driving to Amboise take care to learn which roads are the toll ones. We paid €19 in total for the toll roads there and the same again on the way home. Rather an expensive trip but it did save us around an hour each way.

When touring this region of France you will so have much to choose from but take time to visit The Chateau du Clos Luce and enjoy walking the same paths that da Vinci did.

Castles of the Loire Valley France

Amboise the perfect place to explore the Loire Valley