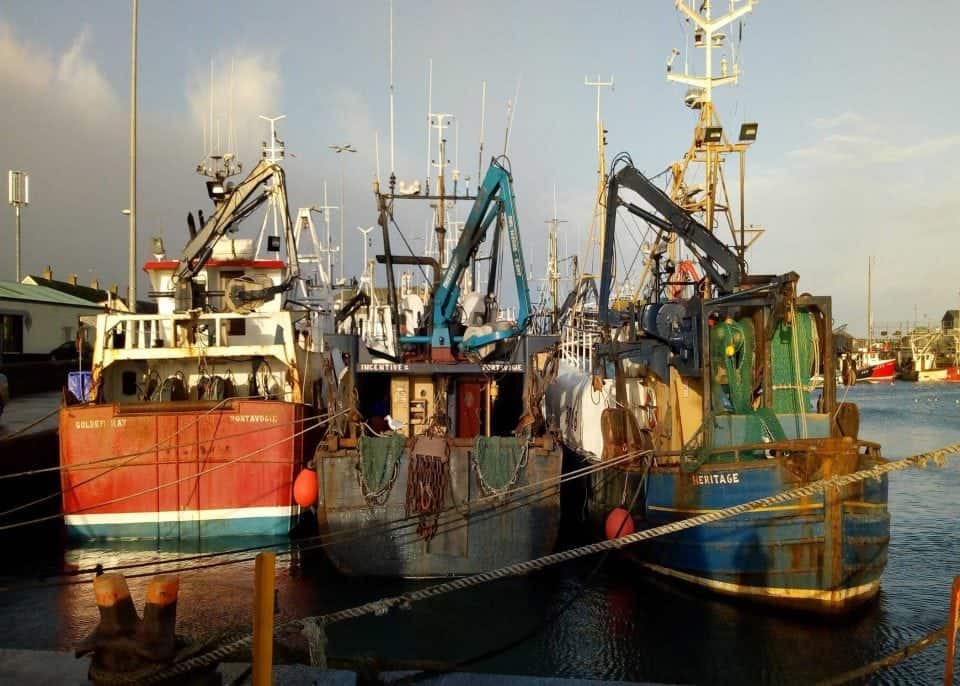 I have read about Portavogie prawns for many years and being the foodie that I am I simply had to make a trip to the place where they are plucked from the sea.

We were lucky enough to be house sitting in County Down and had a wealth of seafood restaurants to choose from, but we wanted to visit these world famous prawn fishing grounds to taste the Portavogie prawns.

Are you planning a trip to Ireland? Here’s all you need to know about getting here

Portavogie’s name comes from the Irish Port a’ Bhogaigh, meaning ‘harbour of the bog’). The celebrated Portavogie prawn features on many restaurant menus, locally and globally and they are an absolute treat.

Portavogie is a small village in County Down, Northern Ireland. It is the easternmost settlement in Ireland and is within the Ards area on the Ards Peninsula, which is home to Strangford Lough.

Portavogie is renowned for its prawn and herring fishing. The town houses a large fishing fleet in a modern harbour. It is also proudly the village where George Best the famous football player chose to retire to.

Right beside the harbour is the Quay’s Restaurant, which comes highly recommended. I have to say the exterior of the restaurant doesn’t look like much from the road but the interior is spacious and the food is excellent and very well priced.

Irish seafood and some Portavogie Prawns

We started with Fivemile Town goat’s cheese fritters that were lightly flavoured with honey and herbs. The leafy greens with the fritters included salt baked baby beetroot, roasted crushed hazelnuts with a granny smith puree and aged balsamic dressing. This was absolutely superb. I usually don’t like a hunk of goat cheese but this was delicate, creamy and not overly tart like some goat cheeses. The combination of flavours was creatively balanced and provided a fantastic starter for only £5.50. 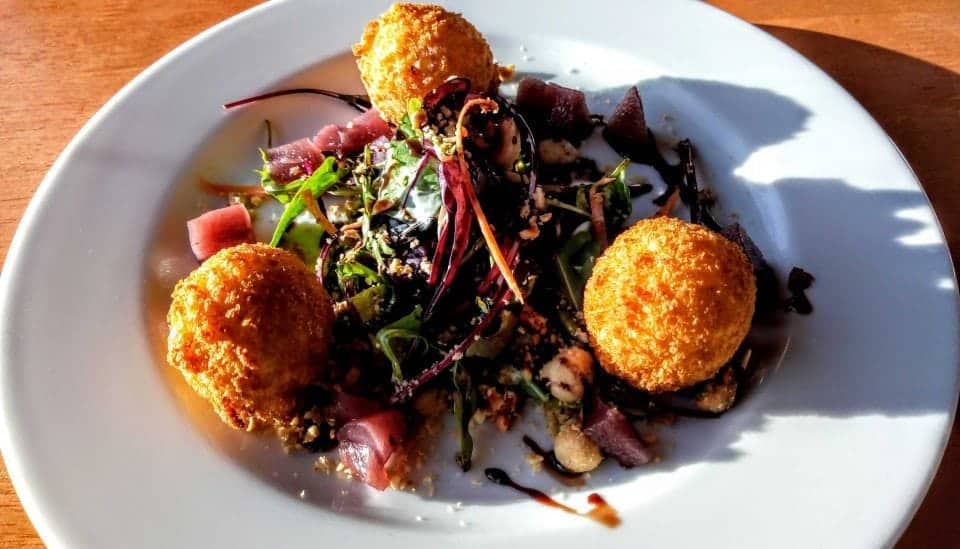 Hubs started with the Fisherman’s pot which contained Gary Young’s locally smoked salmon (rightly famous in these parts), hand shelled Portavogie prawns and smoked mackerel accompanied by some crostini, shredded baby gem lettuce and cherry tomato salad. The seafood in the little pot was combined with a lovely light seafood cocktail sauce and served with homemade Guinness and treacle wheaten bread. The small starter portion was £6.75. Hubs was over the moon the pot was not drowned in seafood sauce and you could taste every single individual item within it. The delicately sweet flavoured Portavogie prawns stood out and held their own against the smoked salmon and mackerel and hubs enjoyed everything so much he even ate all the salad and tomatoes, which he normally doesn’t like. 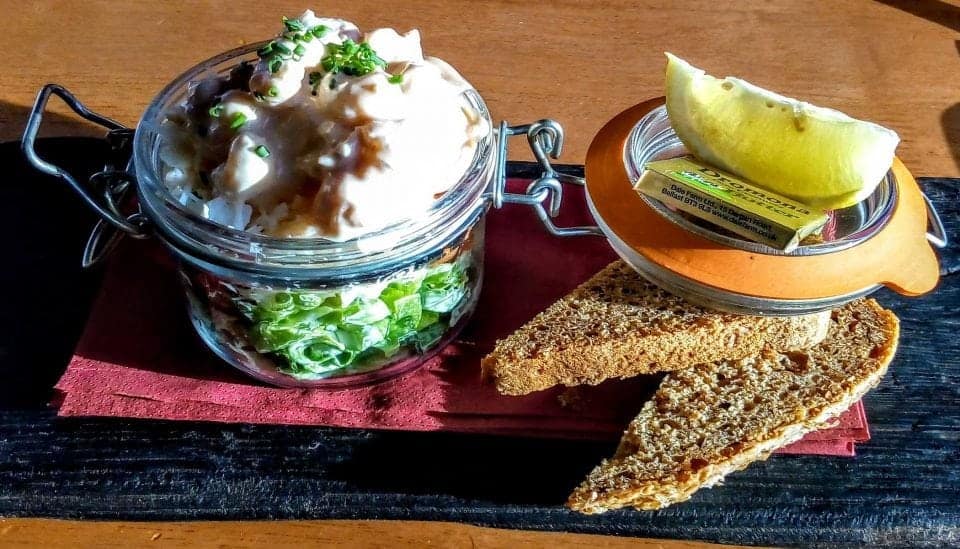 The starter was so beautifully composed and presented, not to mention filling and delicious we were almost afraid we wouldn’t be able to eat our mains but we soon proved ourselves wrong.

I decided that I must have a mains of the famous Portavogie scampi, this came with a Caesar salad and homemade chunky tartar sauce. Expecting the usual N. American 4 or 5 prawns, I was delighted to count 12 in total. Truth be told they were beautiful, light sweet fresh and god so delicious I managed to share a couple with hubs and squeezed them all in. For £13.50, these were beyond a shadow of a doubt the best prawns I have ever eaten. 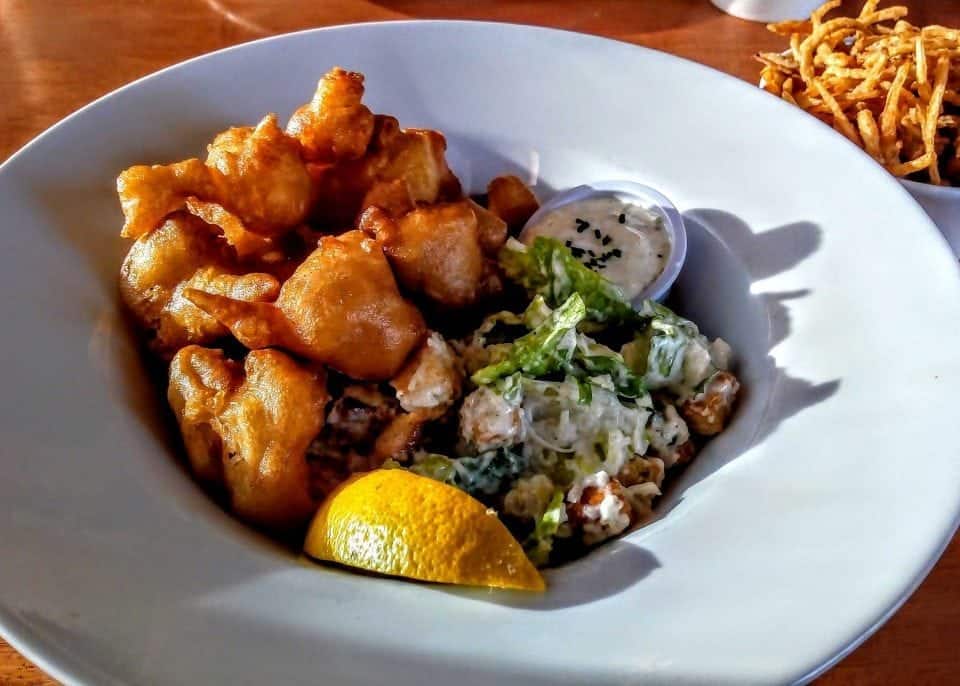 Hubs had decided on the Portavogie mixed seafood platter lemon and black pepper breadcrumb coating, haddock pieces, smoked lythe goujons, deep fried squid and 3 seriously good dips for £11.50. This was one of the daily specials that the Quays do and once they are gone, they are gone. The look of pleasure and the deep silence of enjoyment was pretty obvious – hubs had gone to seafood heaven and did not want to come back.

By the way lythe is a fish from the cod family sometimes called pollack here and goujons are simply a sort of strip of either fish or chicken – you will see goujons on a lot of menus. 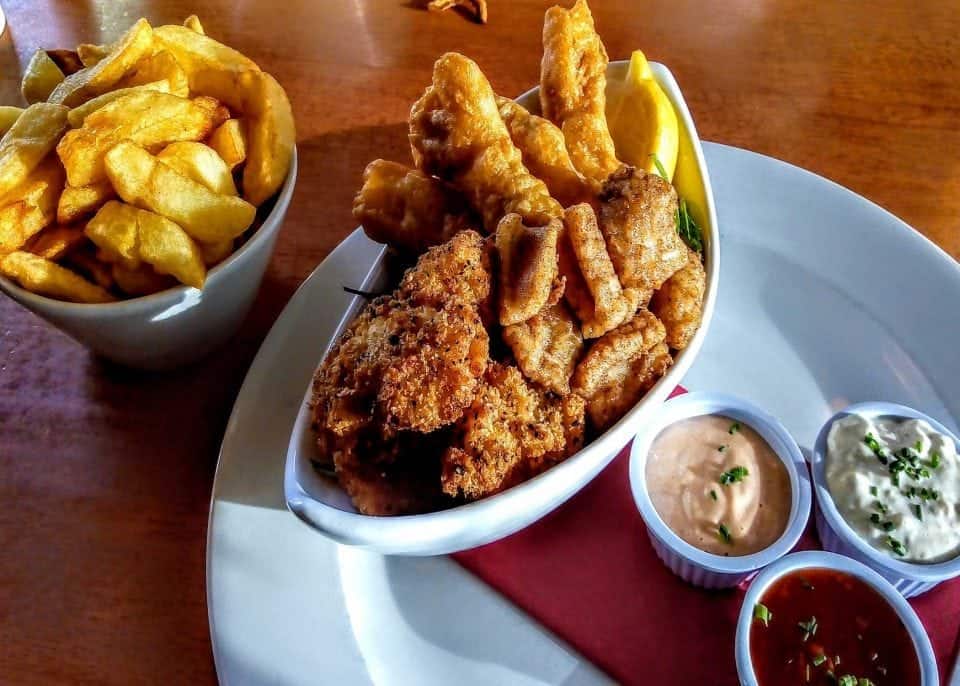 I should mention that each main comes with a side order or chips, Comber potatoes, champ and a few other things I can’t remember. I chose to have something curiously named Tobacco onions – these are very thinly sliced onions with a fine flour coating that has been seasoned with salt, pepper and a little bit of spice. There were incredibly good…so good in fact I nearly couldn’t fit in my scampi as I was filling up on these onions. I have since noticed them in many N. Irish restaurants and have tried a few some okay but none as good as the Quay’s Restaurants.

All in all this is absolutely the best place to try the Portavogie prawns, fresh, sweet and plucked from the sea that morning they simply can’t be beat. We loved the place, all the food was simple and deliciously prepared. We would highly recommend a visit to Portavogie both for the seafood and it is a beautiful area of the Ards Peninsula.

To the right of Portavogie harbour, there is a George Best mural. The famous footballer lived in Portavogie in the years before his death and locals remember him well. Villagers also celebrate Eileen Palmer, who set up the Fishermen’s Choir, which still thrives today. The founding fishermen in the choir all wore black sweaters, knitted by relatives. Poignantly, each garment had a unique pattern, ensuring that the wearer could be identified if they were lost at sea.

Portavogie was protected from the east by the Irish Sea and to the west by the “Bogs”, an area that still exists and can be visited. The area was known as Little Holland due to the amount of windmills the area used to have on the peninsula. The Normans tended to overlook the area so it was left in relative peace.

McCammon Rocks is a reef that lies just out to sea from Portavogie and in low tide you can walk to them. Historically, fishermen anchored their boats on the rocks, today it is very common to see seals gather. So if you get a chance don’t miss a visit to this beautiful area on the Irish Sea and Strangford Lough.

Do you love Ireland? Here are some great posts on things to do and things not to do when you visit

The Ultimate Game of Thrones Tour – a self drive tour of N. Ireland and ALL the GOT sites

The absolute best things to eat in Krakow Poland
What to eat and wher...
What is an Ireland Heritage Card & should I buy one?
What is an Irish Her...
Dublin Airport tips & tricks from a local
Welcome to Dublin Ai...
The Best of Copenhagen Denmark
Things to do i...
Share
Destinations  / Food and Drink  / Ireland

Fantastic restaurant with wonderful seafood, I love the platter, georgous fresh fish, the Portavogie prawns are like none you’ve ever tasted, amazing!!! Would recommend a visit 100%. Very helpful and friendly staff, great drinks menu, lovely ambiance with wood burning stove and views of the wonderful Irish Sea.

We visited The Quays for Lunch 6 yrs. ago in June, coming back in May this year can’t wait to have their amazing Fish and Chips also the best Shrimp Cocktail ever. My Grandmother Mary Gowan was a native of Portavogie and I spent many good times there. Looking forward to my visit again.
Rita Gillard (Watt)