We have housesat many times in the Caribbean and one of our favourite islands is Antigua. The “Dockyard” as it is known to the locals is actually part of a large National Park which includes the historic Nelson’s Dockyard.

The area on the south end of the Leeward Island of Antigua was originally settled by the Archaic Indians who lived on the marine resources. Later the Arawak Indians settled where the actual Dockyard itself it today. In the 1600’s warships and yachts sheltered in the harbour from hurricanes when they weren’t chasing the local pirates. It was not until the early 1700’s that the first buildings were established on the east side of the Harbour. 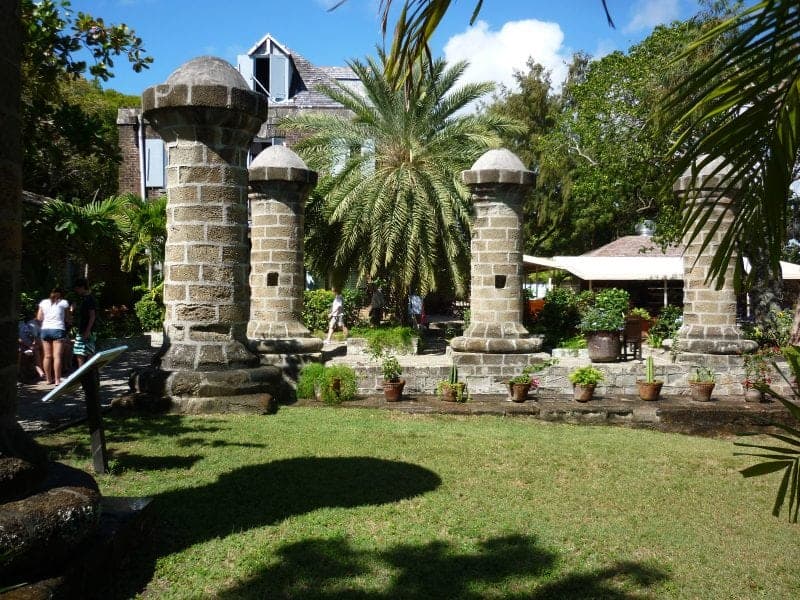 During the French wars that went on through the 18th century, the Royal Navy owned the Dockyard and used the Harbour for the careening of their large warships. Frigates, sloops, schooners and cutters all came into the Dockyard for careening and for renewing of their copper bottoms and a new coat of pitch and tar.

Nelson for whom the Dockyard was eventually named was the Captain of the HMS Boreas since the Americans had become independent and therefore a “foreign nation” it was considered illegal to trade with them due to the British Navigation Act. As a result of his enforcing the Act in Antigua Nelson became exceedingly unpopular with the locals and the Dockyard was abandoned in 1815.

In the 1930s the Colonial Governor tried to raise funds to restore the Dockyard and managed to convince a Canadian Insurance Company to help. It wasn’t until the 1950s though when Lady Churchill got involved that the restoration project really took shape.

The Copper and Lumber Store is now a first-class hotel the beautiful weathered stone Georgian Building now houses 14 suites making it the perfect intimate retreat. Each suite has been graciously finished with authentic period antiques and most open onto the private courtyard filled with tropical plants and the glorious profusion of Caribbean flowers. Others have unobstructed views of the yachts in the Harbour where you can see every style of a boat from the rubber dinghy to the mega yacht. 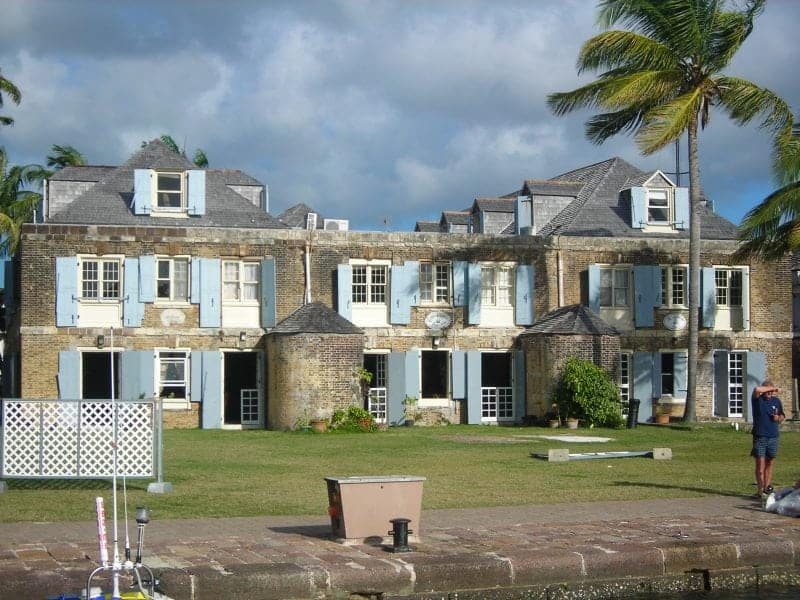 The old Georgian buildings now lovingly restored house a Museum, Gift Store, Sail and Rigging Shops and there are plenty of souvenirs to be had on the way out of the Dockyard where the local Ladies sell t-shirts and handmade jewellery.

If you sail into the Dockyard you need to be cleared by Customs and Immigration and then onto the Harbour Central Office to register your boat and organize a berth. In 2006 average costs were Port Entry and Cruising permit: US$ 16 (40EC) Landing fee: US$ 2 per person (5EC) and Garbage dump: US$ 10 (26EC). 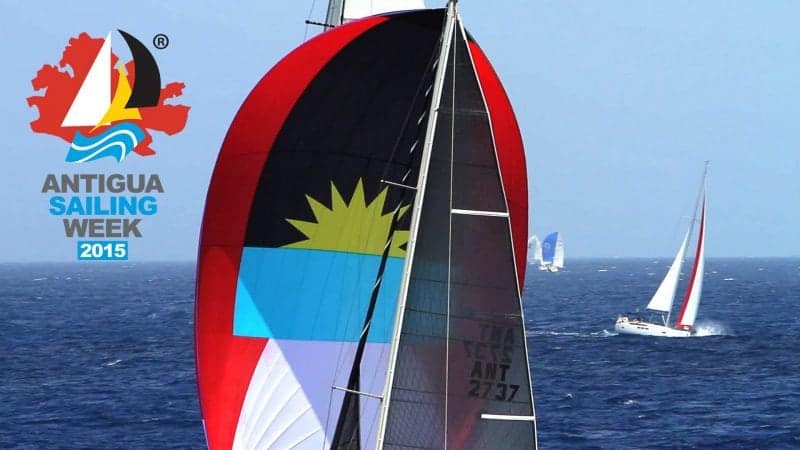 One of the best-kept secrets of Nelson’s Dockyard is the original Bakery behind the Dockyard Museum which was originally the storekeeper’s residence. Until about noon the Bakery turns out some of the best bread, pastries and savoury snacks to be found on the Island. A particular favourite is the patties.

What food do you feel homesick for?

The tasty whole wheat pastry is wrapped around a spicy vegetarian or meat filling creating the perfect hand-held snack. Customers start lining up for the patties and bread around 7 in the morning usually by 9 or 10 most things are sold out. 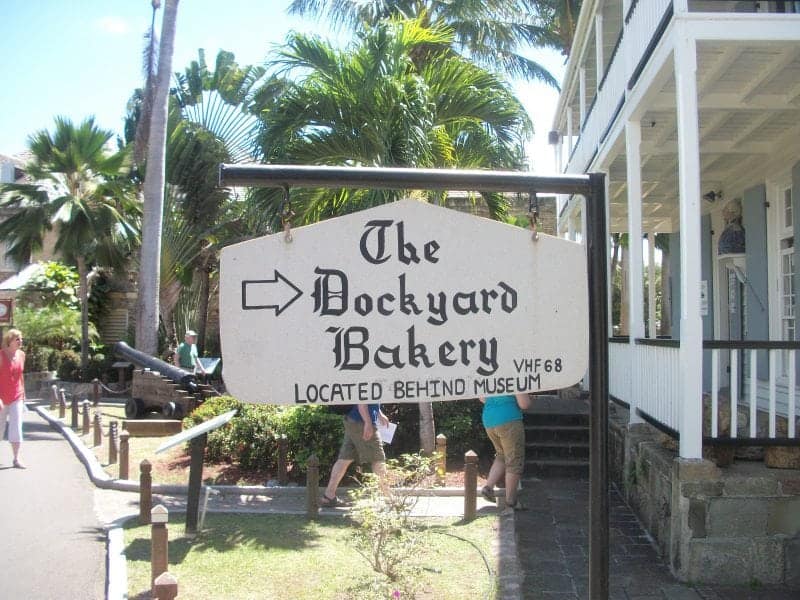 The Dockyard does have a small fee to enter but many times you can just walkthrough. There are vendors in the entryway into the Dockyard where you can pick up some inexpensive souvenirs and t-shirts then you walk down the path into the Dockyard itself. Grab a quick lunch at any of the restaurants and wander around to admire the expensive boats and cruisers. Copper and Lumber serves a great lunch and you can get snacks at the Bakery. Tour the Museum and simply enjoy the breezes coming off the water. 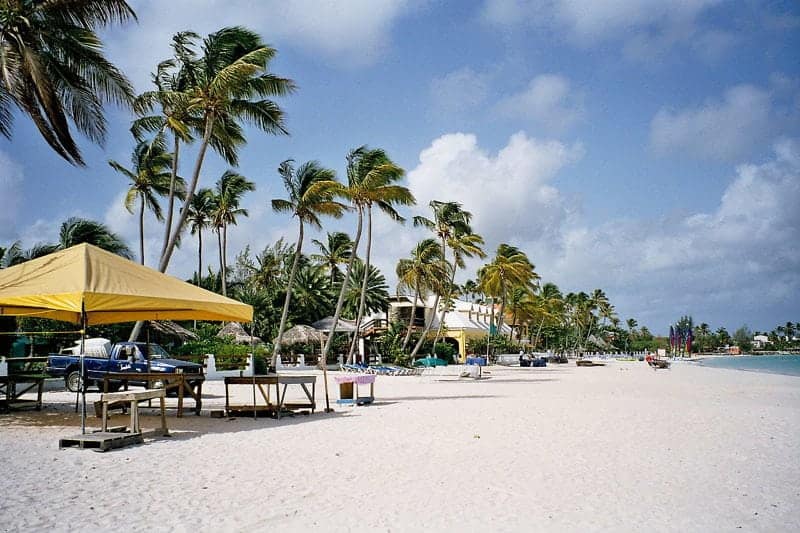 Antigua has 365 beaches to enjoy and they are all public and free so take advantage of some of the best including Galleon Beach which is a beautiful little quiet spot just around the corner from the Yacht Club. An absolute must do is attending the big Sunday night party at Shirley Heights.

Reggae and steel drum bands, dancing lots of drinking and views to die for. Shirley Heights is the party everyone attends on Sunday Nights its free entry and loads of food to buy from Jerk Chicken to Roti some of the best on the Island are served here. Keep a watchful eye out for the green flash as the sunsets.

Antigua is my favourite island in the Caribbean and there is a lot to do there if you are visiting you should read 20 Incredible things to do in Antigua and Barbuda by Vicki of Make Time to See the World it has some fabulous things you shouldn’t miss on the Island.

Pin it for later:

Explore the Killary Fjord in glorious Connemara Ireland
Exploring the Killar...
What to eat in Kuala Lumpur all the best dishes
7 of the Best dishes...
Travelling and exploring the Amalfi and Capri Coast
The Best Itinerary t...
Avoca Ireland a fabulous day trip to the Avoca Mill
Avoca Mill Handweave...
Share
Caribbean  / Destinations 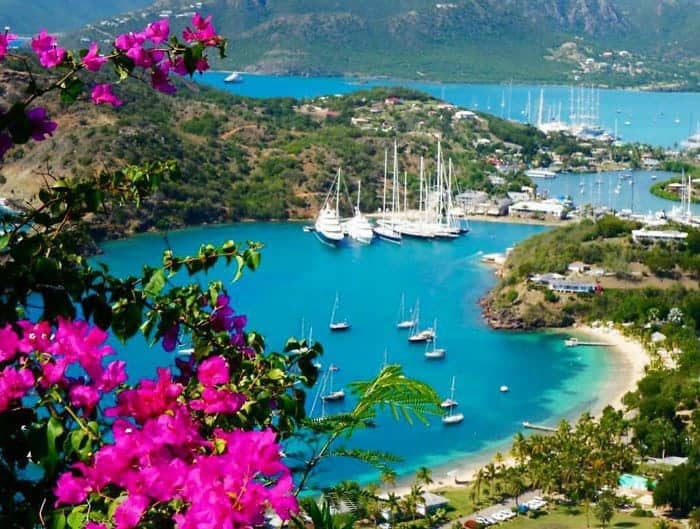 Antigua: Living off Grid in the West Indies
September 3, 2017
© Copyright XYU and Beyond 2019 Exclusive member of Mediavine Travel