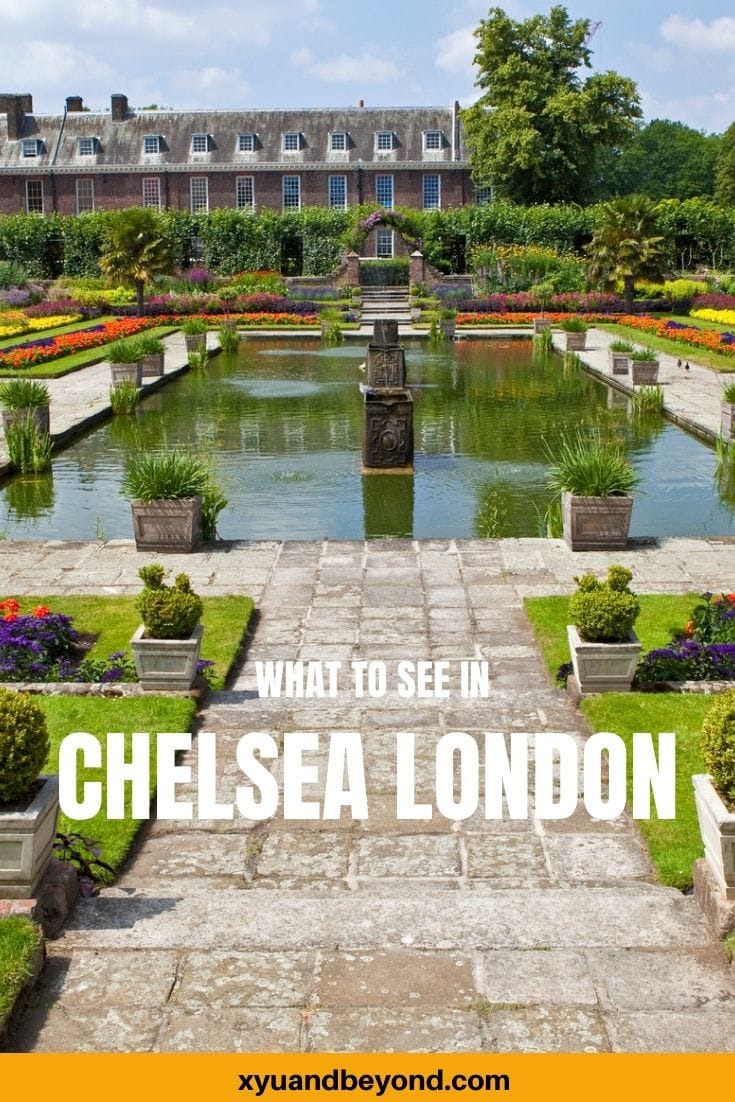 Things to do in Chelsea London

Chelsea in London the home of the mighty rich and officially known as the Royal Borough of Kensington and Chelsea is one of the smallest in the UK but it is also the most densely populated. Not only that but it contains many of London’s finest museums in a short stretch plus a myriad of other attractions to visit.

Kensington and Chelsea are home to some of the “poshest” and richest individuals in England. But the Borough is a lesson in contrasts. From the mega-rich shopping of the Kensington and Chelsea set with Harrods and other upmarket shops to Kensington Palace (Diana’s home and memorial) the Chelsea Flower Show to the Nottinghill Carnival. There are a lot of things to do in Chelsea from some of London’s finest museums to luxury shopping.

14 Things to do in Chelsea London

“There is no other city in the world where you will find such first-class museums all within walking distance of each other.  “The Great Exhibition in Hyde Park in 1851 created the foundations for these grand institutions dedicated to the arts and sciences. It was this investment in the area that set in motion a building spurt with large terraced houses which gives the district its current appearance as a high-class residential area; streets like the Boltons are among west London’s smartest addresses. Catering for this type of resident are the designer shops around Brompton Cross. There’s also a distinctly European flavour to modern-day South Ken with a French emphasis making it all the more chic.”  quoted from London Town.

20 Museums in Chelsea London to visit

We had a plan for ensuring that we got the most out of the area and so we headed towards the V & A Museum a place we had wanted to see for years.

Now the V & A is free but the special exhibitions do have a cost associated with them from around £8-20.  We stood outside the Museum just marvelling at the size of the building and the fact that we were finally here.  Throngs of kids with teachers were going up the steps their bright glow vests in yellow giving the teachers a way to keep an eye on them.  Screaming and laughing the crowds of kids were from around 5 years old right up to teenagers carrying portfolios.

We wandered up the stairs and entered the Museum – it was just incredible, vaulted high ceilings with a gorgeous Chihuly chandelier, marble everywhere just mind-boggling.  We decided to forgo the special exhibits as they unfortunately just were not in our budget and began with the fashion exhibit rooms.

From Chanel to Alexander McQueen and everything that came before and after these exhibits are absolutely a must-see for the fashionphile.  Room 40 contains the Fashion exhibits and they run chronologically around the room starting in 1750. From bustles to punk, the exhibit was outstanding and it was such a joy to stare at pannier dresses from the 1700s and wonder how they manoeuvred doorways to Malcolm McLaren’s punk look from the ’70s.

You can wander the museum for hours and take in exhibits from the Islamic Middle East, sculptures from 1300 to 1600.  In the centre of the Museum buildings is a Garden with a cafe, where you can sit and admire the architecture and enjoy a good cup of coffee before you head back into the galleries.

We pretty much just stumbled around in complete awe admiring jewellery from every century to Tapestries, Theatrical exhibits, paintings and artwork from every era.  It definitely takes more than a day to see everything you should. Don’t forget, if you get a chance to check out The National Gallery in Trafalgar Square as well.

A complete guide to Borough Market London, including what to eat and where

On the tube the day before we went to Chelsea, we saw around 50 young kids with their teachers.  One of the mum’s told us they were on their way to the Museum to visit a real astronaut. We noticed loads of groups of school kids at all the Museums and we were really impressed with the kids, the teachers and the experience the kids had in those museums.

It’s often assumed that the Science Museum is just for kids. It’s certainly very family-oriented, but there are many galleries aimed at a more adult audience. The Making the Modern World gallery contains a staggering collection of artefacts, including the Apollo 10 capsule. On the last Wednesday of every month, there is an adults-only late opening with music, talks, wine … and no children.

This is the Museum kids love the most, famous for its dinosaur displays (plaster casts of the originals); the NHM holds much wider treasures, including a full-scale model of a blue whale.

The building itself is a masterpiece with intricate animal carvings peering out from every corner. If the lineups are long, try the side entrance on Exhibition Road much smaller lines if any.

Charles Saatchi, one of the world’s foremost art collectors, opened his own gallery in 1985. It specializes in cutting-edge contemporary art that most of us just don’t get. Even if the art is not for you, the gorgeous, sparse interiors are worth a look. Although the entrance is free, you might want to buy a guide, as the labels on the work really don’t tell you very much.

This A – Z Directory is maintained by the Royal Borough’s Libraries. More information.

Description: The home of Edward Linley Sambourne, the Punch cartoonist and his family. Now a unique museum offering a chance to see a fully preserved Victorian family dwelling.

National Army Museum
Royal Hospital Road
Description: Discover the impact the British Army has had on the story of Britain, Europe and the world.

Natural History Museum
Cromwell Road
Description: Museum of the natural world; there are a huge range of exhibits from animated dinosaurs to an earthquake.

The British Library Sound Archive
96 Euston Road
Description: One of the largest sound archives in the world with over 1 million discs of music, oral history, drama and sound.

Things to do in Chelsea

Come to Kensington Roof Gardens and enjoy the view! Located on top of the former Derry and Tom’s department store and covering 1.5 acres, this is the largest roof garden in Europe. You can lose yourself in the Spanish, Tudor and English woodland-style gardens and make the most of the panoramic views over West London. You can even dine in the exclusive Babylon Restaurant. You should check that there are no private parties taking place before you go to avoid disappointment!

The Chelsea Flower Show is a garden show held for five days in May by the Royal Horticultural Society (RHS) on the grounds of the Royal Hospital Chelsea in Chelsea, London. Held at Chelsea since 1912, it is the most famous flower and landscape gardens show in the United Kingdom, and perhaps in the world.

Highlights of the Chelsea Flower Show include the avant-garde show gardens and an incredible cut garden flowers show in the marquee. There is cutting-edge garden design, fabulous floral displays and simply the best shopping for plants and garden items – tickets are pretty damned expensive for non-members starting at £83.75.

Kensington Gardens Elfin Oak is over 900 years old and originally grew in Richmond Park. It is covered with tiny magical figures carved between 1928-30 by Ivor Innes. This most unusual tree owes its preservation to Spike Milligan.

Classical music, rock, pop and jazz, sporting events, galas, banquets and balls and the world-famous Proms series all take place within the Royal Albert Hall’s iconic oval walls. The brainchild of Prince Albert, inspired by the success of the Great Exhibition, the hall first opened in 1871, ten years after the Prince’s death.

Heavily influenced by ancient amphitheatres and the theme of the ‘Empire and the arts, the oval structure’s terracotta walls are decorated on the outside with a frieze dedicated to “The Triumph of Arts and Sciences”. Gaslighting, poor acoustics and old pipe organs have been replaced over the years and the awe-inspiring venue now exists as a testimony to both the architectural and aesthetic achievements of the past – it now features the largest pipe organ in the British Isles.

Kensington Gardens used to be a private park that is now public. Home to Kensington Palace and the Diana Princess of Wales Playground and memorial and many other attractions.

The beautiful grounds include a formal Italian Garden, the Peter Pan Statue and cover over 260 acres.

At Kensington Palace, you can explore the birthplace of Queen Victoria and home to young royals for over 300 years. Walk in the footsteps of royalty in Victoria’s re-imagined childhood rooms and the magnificent King’s State Apartments and Queen’s State Apartments.

In 2021 a memorial statue to Princess Diana was unveiled in the gardens of Kensington Palace – In my personal opinion, it is just an ugly thing and doesn’t do Diana justice at all.

The misnomer is confusing, being more a collection of shops and restaurants than an actual farmers market; yet it proves to be one of the more peaceful locations along the otherwise bustling Kings Road. A sunny day is really the only time to go, with the restaurants being exclusively outdoors. While the prices of the gardening, organic and second-hand bookshops hardly represent a bargain they nevertheless undeniably add to the market’s aesthetic charm.

Home to the historic Peter Jones department store and the Royal Court Theatre, Sloane Square is situated at the top of Chelsea’s famous King’s Road. Check out the Grade II listed war memorial and the Venus Fountain, the basin of which depicts King Charles II by the River Thames with Nell Gwynn, the prominent restoration actress and one of his most notable mistresses.

Shopping On The King’s Road

If you’re looking for a stroll around shops in an outdoor area with a great variety of merchandise, King’s Road is the place to go. Though many shops are pricey, this retail destination is still worth exploring for unique finds like the outlet shop of Zadig & Voltaire and Tabio (a luxury Japanese sock shop). A long road running parallel to Victorian houses with an air of ease and quiet, strolling along the King’s Road starting from Sloan Square is a lovely way to spend your afternoon.

You could spend several days exploring the area of Kensington and Chelsea, one tip though avoid the school holidays at all costs as the area will be packed with children and parents attempting to get into the Natural History Museum.

18 Things to do in Notting Hill London’s prettiest neighbourhood