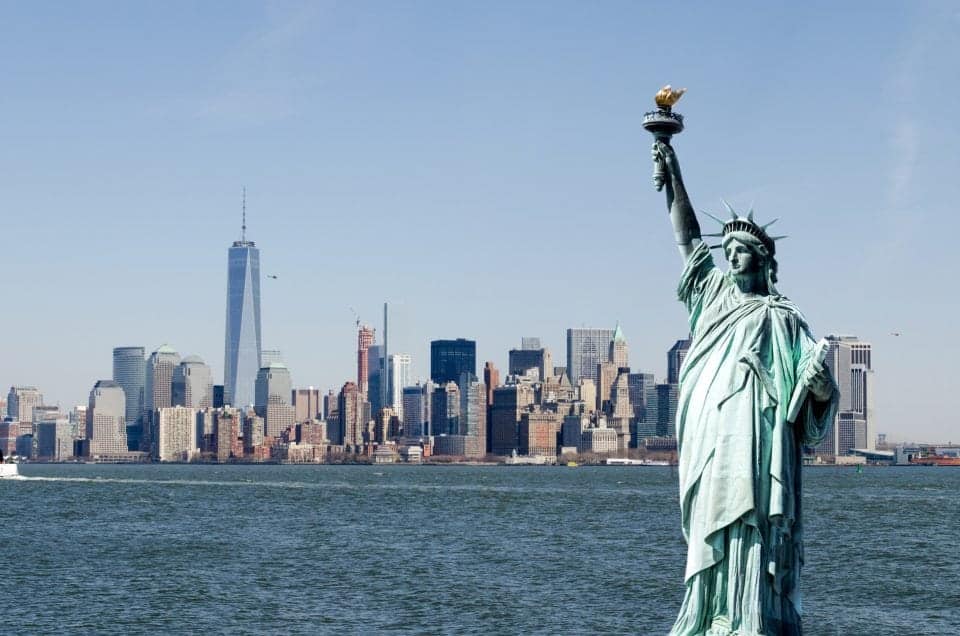 Stuff to do in New York City

Planning a trip to New York can be rather overwhelming trying to figure out the best New York City sights to see in a short period of time can do your head in.

When you get to New York City there’s a lot of city sights you just can’t miss – the frenetic activity of Times Square, the peace of Bryant Park and the stunning beauty of Central Park, Broadway, 5th Avenue – so much to see, do, hear and experience and far greater writers than I have written copiously and beautifully about New York.  But here is my list of the top 13 best things to do in New York City, believe me, there is so much more than this but these were our favourites.

Now I have to tell you that it simply isn’t possible to spend a day or two in New York and see it all there are so many unusual things to do in New York and secret places you won’t know about that you should make a list of everything you don’t get to for when you return.

We took a Hop on Hop Off bus tour to familiarize ourselves with the City which we do in every city we visit, it’s a great way to get around and learn the places you want to go back to. This is our list of the 12 best things to do in New York plus food of course.

If you are anything like me and love a street fair NYC has the best street fairs for every season. There’s green markets, flea markets, Christmas Markets, antique markets, vintage markets, and so much more to choose from make sure you check before you go where the markets are that you’d like to attend.

We stayed in an Air B&B in Brooklyn when we arrived in New York and I wish I had more time to explore this fantastic eclectic neighbourhood. Gabby from Boarding Call has written a great article on The best free things to do in Brooklyn which will be my go-to guide for my next New York trip.  4 days in New York should just about be the right amount of time to see the main sites and get a feel for this bustling city.

One of the best things to do in New York is to simply hang out in a beautiful park. Our favourite place, well one of them was Bryant Park behind the New York Central Library. The Library has a lovely reading room available in the park and you can peruse the latest novel or newspapers, play a game of bowls, ping pong or even get down to the park for a film in the evening. Canadian libraries should follow Bryant Park’s example.

Central Park is also a New York City sightseeing must, the park is immaculate, no smoking is allowed within the park and it has a quiet and peaceful charm about it.  The Park was created in 1853 as a way to “improve public health and contribute greatly to the formation of civil society”.  The success of the Park started the urban park movement in America building a way to create National Parks across the country.

The design of the Park was the result of the 1858 competition won by Connecticut-born journalist and agriculturalist Frederick Law Olmsted and architect Calvert Vaux. They named their plan “Greensward” for their preferred landscapes of sweeping meadows and vast water bodies designed to appear limitless.

The designers created a formal Mall, the grand elm-lined promenade and the main architectural feature, Bethesda Terrace, a two-tiered esplanade featuring elaborate carvings and a central sculptural fountain that eventually became Angel of the Waters when American artist Emma Stebbins was awarded the commission.

By the ’80s and ’90s, the park has become a dangerous place to wander and was a complete mess. It took a historic agreement between the City and the Central Park Conservancy to create a new and gloriously beautiful space in NYC.

Wondering what to pack for New York City? Well Kelly Ann is a native New Yorker and has all the answers here What to Wear in NYC: A NYC Packing List

New York City sightseeing using the Hop On Hop Off Bus is an awesome way to see all the cool New York stuff to do. We took the hop on hop off bus of which there are several companies that do this and they all cost around $75 Cdn for 4 days.  They include a Bagel Breakfast and a boat ride which is a pretty good value for money and allows you to get your bearings for the loads of walking you will do.

The Hop On Hop Off buses in New York are a fabulous way to see the City and then take trips to the points you want to see again.  There are some valuable tips for using the buses including checking out the reviews online to find the best tour for what you are interested in seeing.

3. The High Line may not be a secret, but it is definitely one of New York City’s gems.  This is one of my tips for the best things to do in New York because it’s a fabulous place to just hang out and people watch. An abandoned, above-ground railway stretching from the Meat Packing District to Chelsea, the High Line has been restored to feature botanical gardens, a walking path, and great views out over the river.

4.  The National September 11 Memorial and Museum

A visit to the 9/11 Museum and Memorial Plaza can be a very emotional experience, particularly if you memories of that awful day. However, it is a tour that you shouldn’t miss. The Memorial is free to visit; the museum costs $24 per adult but is free Tuesday evenings from 5 pm to close.

Head to the 86th floor of this towering skyscraper to experience truly jaw-dropping views of Manhattan.  You’ll have to wait in long lines for this attraction but if you book a tour with one of the many tour operators you can skip the lineups.

7.  The Statue of Liberty

Take the free Staten Island Ferry to get some incredible views of the statue.

Another of New York’s iconic sites it’s free so take a long slow walk over the bridge to enjoy the views over Brooklyn and Manhattan. When you are on the Brooklyn side make time for some of the great street food or restaurants at a much better price than the City itself.

A visit to the Grand Central Terminal is a must when you are in New York and most likely you will be passing through it at some time. So take time to enjoy the architecture, the people watch, the food hall here is superb so take a moment to enjoy some great food or take an official tour.

Home to some of the most famous works of art in the world. The Museum is home to Van Gogh’s Starry Night, Monet’s Water Lilies, and Andy Warhol’s Campbell’s Soup Cans.  This is a definite don’t miss.

Worth seeing just to say you did but Times Square is a noisy busy place so don’t stop to eat (unless its some street food) the hordes of tourists will drive you mad, but at least you say you saw it.

The Met is for me one of the absolute best things to do in New York, how can you not love a museum that charges what you can afford to pay? This is one of the best Museums in the world and you can ‘pay what you can’ which means everyone can afford a visit. The Museum holds over 5,000 years of history within its environs and is a without a doubt New York must do.

So much to do in New York and so little time. Take in a Broadway play or musical, check out Off-Broadway. Eat some street food, hang out in Bryant Park, go to the library and shop – one must always shop in New York.

Obviously, you can’t talk about the city without mentioning that one of the best things to do in New York is eat. So can we talk about food in New York, just for a moment?  This is the 2lb Fidler on the Roof deli sandwich from the Carnegie Deli, cost $29 US dollars. Then there is New York Pizza, double the size of a Canadian one. These lovely open-faced sandwiches can be found in the superb food court at Grand Central Station. Let’s not forget the vast range of street food in New York either.

If you really want to get into the New York food scene – and why wouldn’t you? You need to take a New York City Food Tour with Like a Local Tours. Retha has written all about the tour in her article.

I know lot’s of folks may feel that NYC is a dangerous place for potential pickpockets and scams but I don’t worry about that with a great crossbody bag. Melissa of the Thrifty Family blog has a great post about the best travel Sling Bag that will reassure you that your valuables are safe. Other options are to use a fireproof safe for your valuables.

What do you think? What are some great places of interest in New York City that first-timers should see? Do you have a list of the best things to do in New York for those visiting for the first time? I would love to hear them. 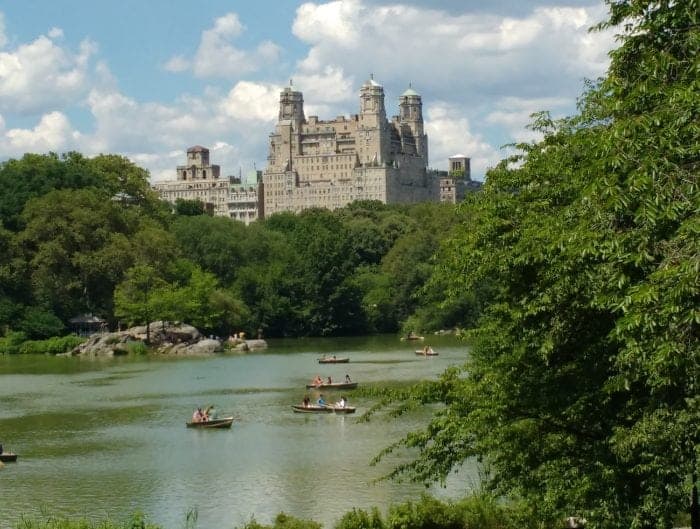 What a great read. I like the less touristy options you give. I’m headed to NYC next month for the first time. I’ll be bringing this article with me!

Jealous I adored NY and so want to go back many times again.

I love NYC – I’m here right now and love exploring all the city has to offer. I love spending time in Bryant Park especially in the Spring!

I only had a day in New York, so there is so much more I need to see. I did do the sightseeing bus, but I would have loved to explore the High Line.

This is a great list! I think that they took away the pay what you can at MOMA. So sad.

I haven’t been to NY in ages and this has me excited to plan a trip!

I would love to go back to NYC there’s so much we didn’t do on our first trip! I know a lot of people go for a weekend and think they’ve seen it all but that’s impossible. Great list!